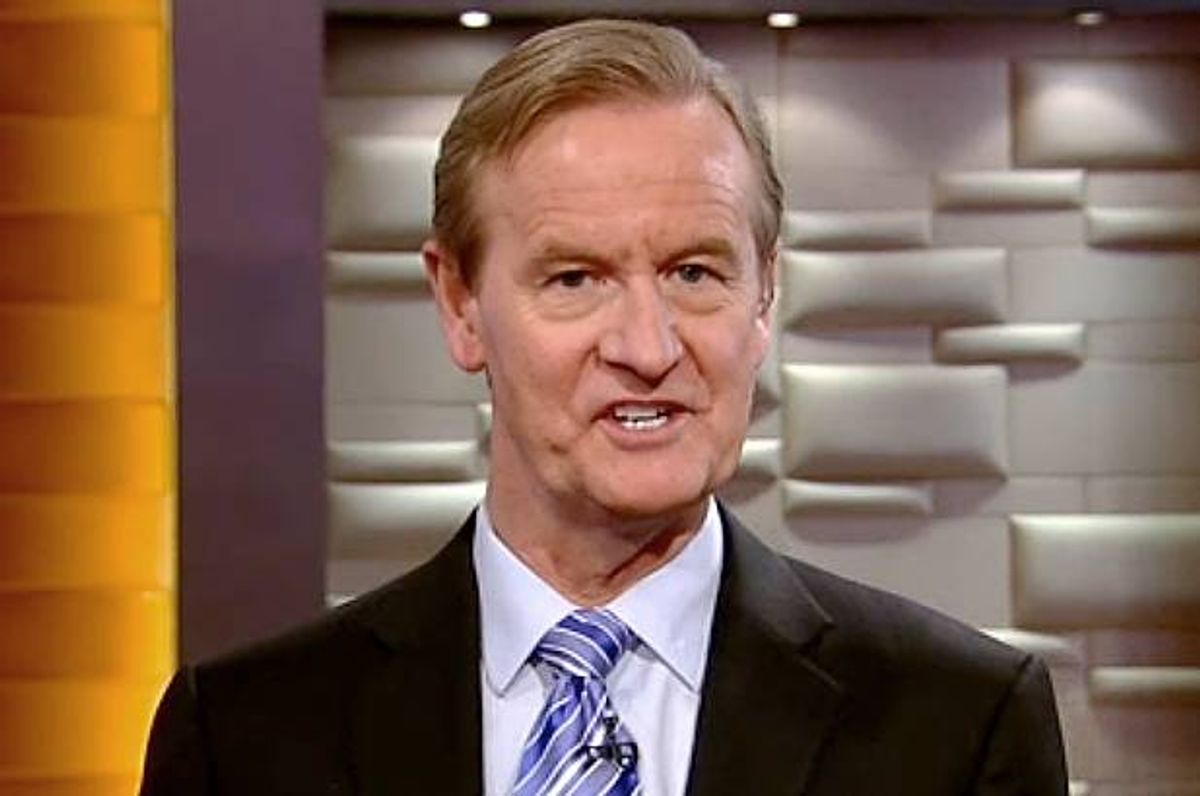 A janitorial company painted by “Fox and Friends” as the victim of attempted pro-union government coercion has in fact been coercing its own employees to hide safety risks from the government, employees charged to Salon.

“I felt this wasn't good, to have to lie,” janitor Ana Parada told Salon in Spanish. “Because I wanted someone to know what was happening.”

Parada’s employer, the Texas-based Professional Janitorial Services, was praised on last week’s “Fox and Friends” by Fox legal expert Peter Johnson for defying what he suggested could be a government “protection racket.” After host Steve Doocy asked “Is the government quietly blackmailing companies to unionize?,” Johnson asked if “we have a situation in this country now where big federal government is putting its arm around” the Service Employees International Union, to “say, ‘Hey, this is a pretty good union here. Maybe you should hook up with these folks — and if you don’t hook up with these folks, non-union business, maybe OSHA’s going to be coming down your smoke stacks big time.”

At issue in Fox’s outrage segment — and stories about PJS in National Review and the Daily Caller — is a year-old letter issued by an OSHA official to a health and safety specialist from the United Steelworkers union, who had asked whether workers alleging safety issues in a non-union workplace could designate someone from a union to participate in an OSHA investigation as a “personal representative,” or as “walkaround representative” who accompanies an inspector on a workplace visit.

OSHA Deputy Assistant Secretary Richard Fairfax answered “yes” on both counts, writing that “a person affiliated with a union without a collective bargaining agreement or with a community representative can act on behalf of employees as a walkaround representative so long as the individual has been authorized by the employees to serve as their representative.”

Over the past five months, some non-union employees at PJS took OSHA up on the opportunity, inviting staff from the Service Employees International Union, which had worked with them to file OSHA complaints about their workplace, to accompany the ensuing OSHA inspections of buildings cleaned by PJS. According to the Department of Labor and SEIU, a union representative made it into the first building visited by OSHA, but was turned away by PJS at OSHA’s subsequent stops. SEIU’s presence at PJS (and separately at the Philadelphia International Airport) prompted Fox’s Johnson to accuse the federal government of singing “Look for the union label,” (a charge he illustrated by singing the song himself); to dare the government to sue PJS to force the company to let in SEIU; and to warn of the government “putting their arm around” SEIU and “putting a hammer to businesses that have decided not to be union.”

But pro-union PJS workers contend that they’re the ones who were coerced when OSHA came to visit, and their company — though portrayed on “Fox and Friends” as a victim of mob-style pressure — is the one doing the actual coercing.

Parada, a three-year PJS employee, told Salon that the day her building was being inspected, management “just said that I should go home and not worry about not working, that they were going to pay me” for the rest of the shift. When she declined the offer to leave early, she alleged, management promised her "that everything will change" with existing safety issues, and told her “to not say [to OSHA] that we hadn’t received training, and to not say either we had problems with our hands because of the chemicals … They were saying lies.” In addition, charged Parada, a manager told employees that they would get fired if anything went wrong with the OSHA inspection.

Parada’s allegations were echoed by co-worker Virna Tejada, who told Salon that a supervisor told her to stay on certain floors during the OSHA inspection — a move she believed was designed to keep her from speaking to the inspector — and that if she did speak with an OSHA inspector, she should claim that there was only one closet for storing chemicals and documents. In fact, said Tejada, there were two. In addition, Tejada said, she was told not to tell OSHA that they were using Windex. After the inspector left, charged Tejada, a manager told a group of employees, in Spanish, “If anything goes wrong with the inspection, you’re all going to get fucked.” (Like Parada, Tejada was interviewed in Spanish.)

“What you see here is what we all fear: employers using their clout to intimidate and scare workers into silence,” SEIU Texas President Elsa Caballero told Salon in an e-mail. “The deck is already stacked in favor of companies like PJS, couple this with their bullying tactics and it becomes nearly impossible for workers to speak up.”

Tejada said that she did not get to see the OSHA inspector the day they came to her facility; Parada said she did get to talk to one, though without the presence of an SEIU staffer. If SEIU had been there, Parada argued, it would have been harder for PJS to mislead OSHA about the conditions there. (OSHA moved forward after the inspections on some allegations, but not others.) Parada said she was “afraid” at work using cleaning chemicals without proper safety equipment or training. Tejada said she’d worked with SEIU to bring in OSHA after union organizers who visited her at home had seen the bruises, cuts, and abrasions her job had inflicted on her hands.

PJS did not respond to multiple Salon inquiries regarding the workers’ allegations. In a March statement to the Houston Chronicle, PJS stated that it “makes providing a safe and healthy work environment for its employees a top priority,” and that it had until recently gone nearly 27 years without OSHA violations. Following the recent round of inspections, the Chronicle reported that PJS was issued “serious” citations by OSHA for violations of safety rules including chemical training and data maintenance, and that PJS paid roughly half of the $14,000 potential fines under settlements with OSHA. The company told the Chronicle that it had swiftly addressed the alleged violations, called the chemical training allegation “false,” and chalked janitors’ allegations up to a “corporate campaign” mounted by SEIU against PJS, Houston’s largest non-union janitorial company. PJS has previously accused SEIU of slander, and is seeking $9 million from the union in a years-long lawsuit.

As I’ve reported, pro-union advocates and academics have long argued that the limited protections, slow pace and paltry penalties of the National Labor Relations Board leave anti-union companies a wide berth to intimidate, indoctrinate and retaliate against workers who seek to unionize. Citing the inadequacies of the government-supervised unionization election regime, U.S. unions have increasingly turned in recent decades to “corporate” or “comprehensive” campaigns designed to pressure corporations into agreeing to more favorable terms for workers to secure union recognition. Such campaigns can include instigating, highlighting or exacerbating legal threats over alleged corporate misdeeds, from wage theft in the fast food industry to sex discrimination at Wal-Mart.

Asked about “Fox and Friends”’ suggestion his agency could be “blackmailing companies” to recognize unions, OSHA’s Jordan Barab told Salon, “This has nothing to do with union organizing. It’s purely about conducting a better inspection.” Barab, the Obama administration’s deputy assistant secretary of labor for OSHA, described the 2013 letter that sparked right-wing ire as “purely a clarification” making clear to OSHA inspectors that they had the option to bring union staff whom workers had requested along with them to visit worksites. Echoing Fairfax’s letter, Barab suggested several reasons that workers might choose to request the presence of a union staffer at a non-union site, including that it “can make the workers more comfortable with talking to a government agent.” Barab noted that non-union mineworkers have long been able to bring in staff from the United Mine Workers during investigations by the Mine Safety and Health Administration, “and yet Western civilization still stands.” Asked about conservative claims the clarifying letter should instead have gone through a full formal rule-making process, he answered, “they like us to have a formal rule-making process on everything we do here.”

Barab, a former health and safety specialist for the AFL-CIO, told Salon that despite being illegal, discrimination against workers who went to OSHA was something “we hear about very often.” He called the legal protections in such cases “not very good” due to “a lot of loopholes.”

While pro-business attorneys suggested in the Fox segment and National Review and Daily Caller stories that OSHA could be exploited as a weapon to target and punish companies who resist unionization, none of stories contested that PJS had in fact violated the law. Asked about the likelihood that any given OSHA visit would lead to a citation, Barab told Salon “we find a violation in a high percentage of the inspections,” and said that’s what should be expected given “ideally, we only want to go to places where there are problems.” He noted that inspections can be triggered by requests from workers or workplace fatalities or catastrophes, or take place as part of a probe into a “particularly hazardous industry.”