Malaysia and Australia praise international cooperation, yet thus far only ocean trash has been found 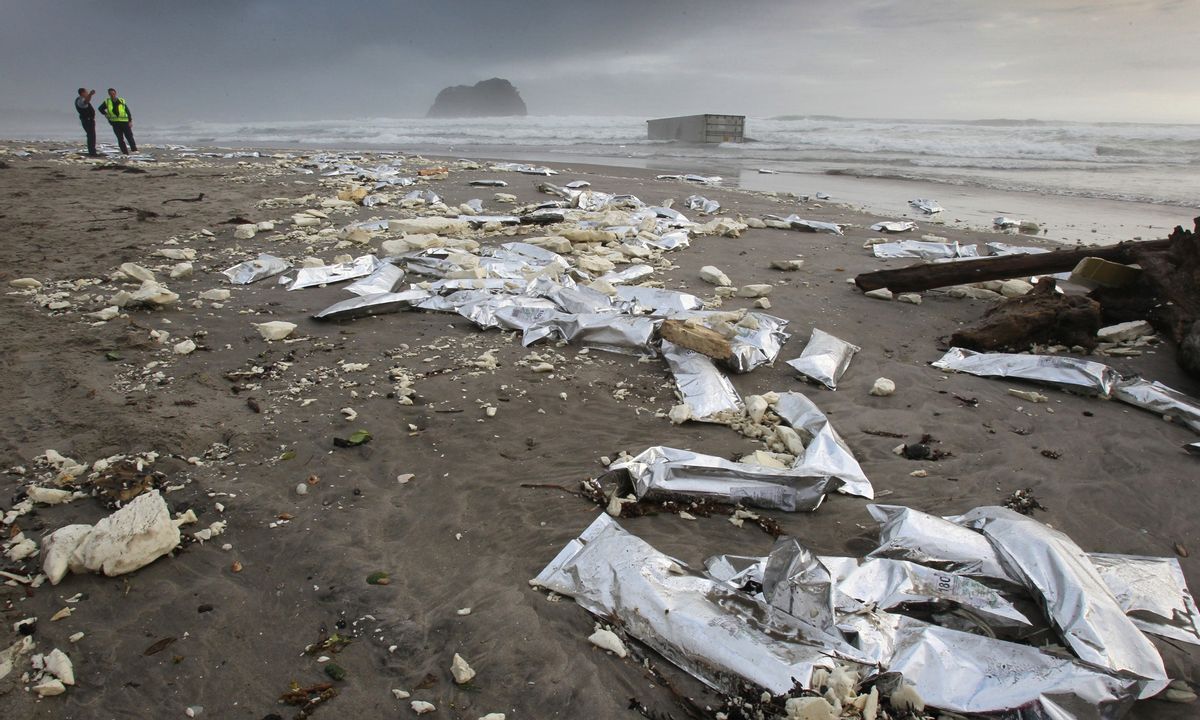 FILE - In this Oct. 13, 2011 file photo, police officers monitor debris washed ashore on the Mount Maunganui Beach as a shipping container fallen from the grounded container ship Rena sits in the breakwater near Tauranga, New Zealand. Not only is the trash a time-wasting distraction for air and sea crews searching for debris from the Malaysia Airlines flight that vanished March 8, it also points to wider problems in the worlds oceans. The ocean is like a plastic soup, bulked up with the croutons of these larger items, said Los Angeles captain Charles Moore, an environmental advocate credited with bringing attention to an ocean gyre between Hawaii and California known as the Great Pacific Garbage Patch. (AP Photo/New Zealand Herald, Mark Mitchell) AUSTRALIA OUT, NEW ZEALAND OUT (AP)
--

On Sunday, the search for missing Malaysian Airlines Flight MH370 turned up a "promising lead": objects spotted by Royal Australian Air Force in the Indian Ocean search zone, which is located 1,100 miles from Perth, Australia, and is roughly 98,000 square miles.

Today, according to the Australian Broadcasting Corp., with confirmation from the Australian Maritime Safety Authority, it appears those four orange objects of note were merely fishing equipment. AMSA tweeted:

The search, despite its massive international scope, turned up empty-handed. It included 10 aircraft and 10 ships from eight different countries. The planes, according to a release from AMSA, included:

At a press conference on Monday, Abbott said:

“It’s been tremendous to see the international co-operation here. We have regular military co-operation with the United States, New Zealand and Malaysia, but to see also the co-operation with us from China, from Japan, from Korea is really heartening and it demonstrates that in a humanitarian cause the nations of this region can come together for the betterment of humanity,”

"Before I begin today’s briefing, I would like to reiterate what Australian Prime Minister Tony Abbott said this morning. The international co-operation underway in the search for MH370 is nothing short of tremendous.

The militaries of Malaysia, Australia, the United States, New Zealand, China, Japan and Korea are all working to find the missing plane.

I should also like to point out that Indonesia has given clearance for 94 sorties - by aircraft from nine different countries - to fly in their airspace, as part of this search. As Prime Minister Abbot said, it is heartening to see so many different countries working together for a humanitarian cause; to resolve this extraordinary mystery; and to bring closure for the families of those on board."

In Hishammuddin's statement he also discussed the upcoming Association of Southeast Asian Nations defense ministers’ meeting that he'll be attending at the U.S. Pacific Command in Hawaii. There he'll brief ASEAN members about the search for MH370 and plans to discuss implementing a "more complex phase of the operation" with "specific military assets."

Currently a Bluefin-21 drone and black box finder from the U.S. Navy are being used in the search. According to the Financial Times, the black box finder can detect "pings" from a mile in front or behind it. The device is usually towed by a ship and dives around 3,280 feet (1,000 meters) below the surface.

Finding the black box is crucial to finding out what happened to the plane and the 239 people on board, which disappeared on March 8 -- 24 days ago. Time is running out on the battery life of the black box "pingers" which send off signals once it make contact with water. According to the Guardian, "A pinger locator for detecting black boxes is being tested off the Australian coast, but it will not reach the search area until Thursday."