Gwyneth Paltrow's getting treated much worse than Chris Martin

Chris Martin is more press-shy than his ex, but he was a partner in the "conscious uncoupling" 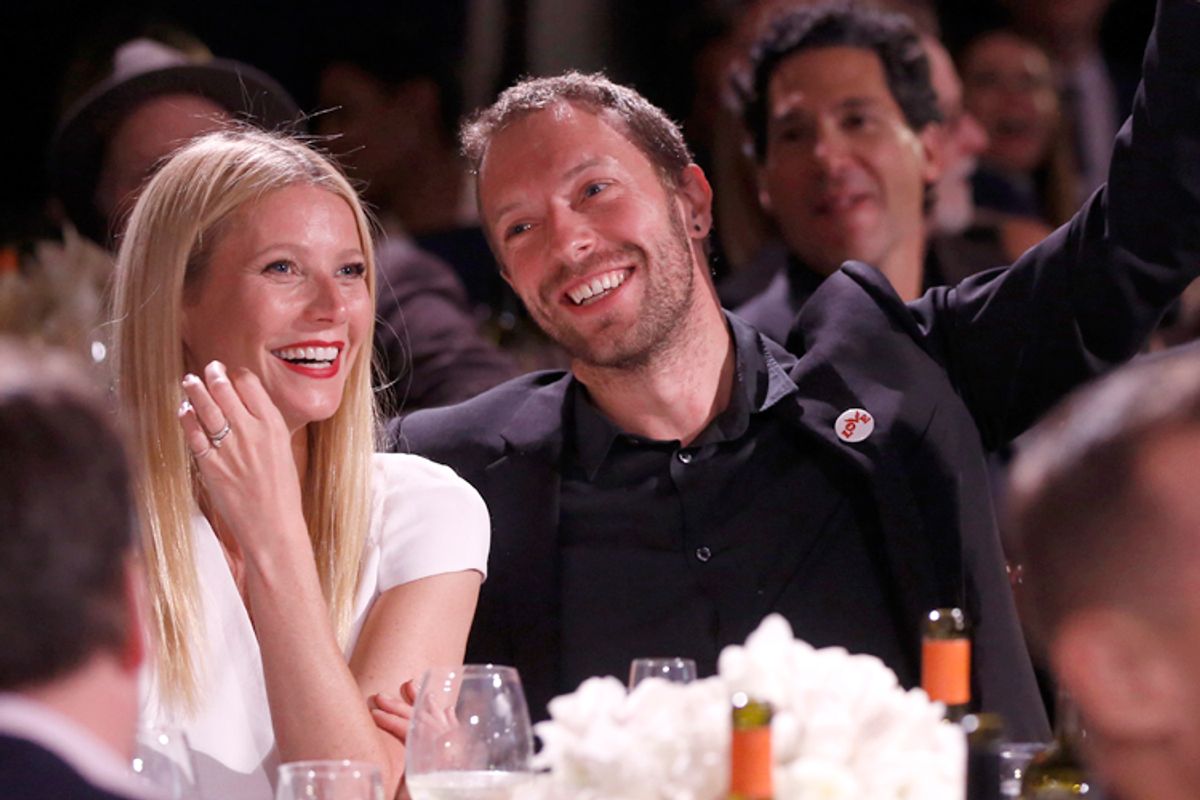 Actress Gwyneth Paltrow and musician Chris Martin were, until their announcement last week that they were to undergo a "conscious uncoupling," together for 12 years and married for 10; the pair has two children together and lived a globetrotting lifestyle as, by all evidence, equal partners in whatever was Project Paltrow-Martin. Martin's name and visage are attached to the "conscious uncoupling" letter.

And yet it's Paltrow who's received all the scorn for the admittedly deeply pretentious announcement, as she has throughout the pair's marriage. The perfect escarole salad Paltrow prepared was eaten by Martin, and he signed off on naming the pair's children Apple and Moses (indeed, Moses is named after one of Martin's songs).  Why does every attempt to read into Paltrow and Martin's marriage end with the takeaway that Paltrow is a villain and Martin a passive bystander?

Us Weekly, for instance, marked the occasion by recirculating Paltrow's "most obnoxious quotes" on its homepage, while Britain's Daily Mail lighted upon jokey old footage from a talk show that it cast as proof Paltrow had a promiscuous youth. Celebrity-gossip editor Bonnie Fuller suggested that Martin would finally be able to "eat bangers + mash again," a joke about Paltrow's refined and ultra-healthy culinary tastes. In general, it's been open season on Paltrow -- and, indeed, her past openness about her fabulous life and her wide-eyed confusion that people might not be able to invest the time or energy she's able to into gourmet cooking, homeopathy or a high-fashion wardrobe have made her into a very fun and intriguing figure in the culture. But all those slagging her right now ought to remember that it takes two to be in a marriage, or to consciously uncouple.

Paltrow, whose website Goop hosted the breakup announcement alongside fashion and cooking tips, is the couple's more forward-facing figure; Martin, lead singer of Coldplay, is press-shy and chooses to speak through music. But, ha, what music it is! Recent albums like "Mylo Xyloto" and "Viva la Vida or Death and All His Friends" have been goopily suffused with sanctimony and pretension in a manner that rhymes precisely with Paltrow's theory that she can teach the world to live better. The actress and cookbook author wants to help you be more present, presuming you're not ashamed of conspicuous displays of wealth. Martin wants to help you get in touch with your most banal emotions, presuming you're not ashamed to feel like every teardrop is a waterfall. But to mock Martin requires parsing all his song lyrics, not just publicly available interviews.

Paltrow's willingness -- eagerness, even -- to face the public exists in opposition to Martin's general avoidance of the press, but neither ever spoke about their relationship. There's a wilderness of mystery surrounding the pair, easily filled in with what else we know about Paltrow because she's told us. In the absence of concrete information about what happened between Martin and Paltrow, it's easy to edge right up to alleging they broke up because of how annoying or controlling Paltrow is perceived to be. But if she were as much a monster, by comparison to Martin, as she's being treated in the press, there would have been no marriage in the first place.