Why shouldn't Colbert joke about race? 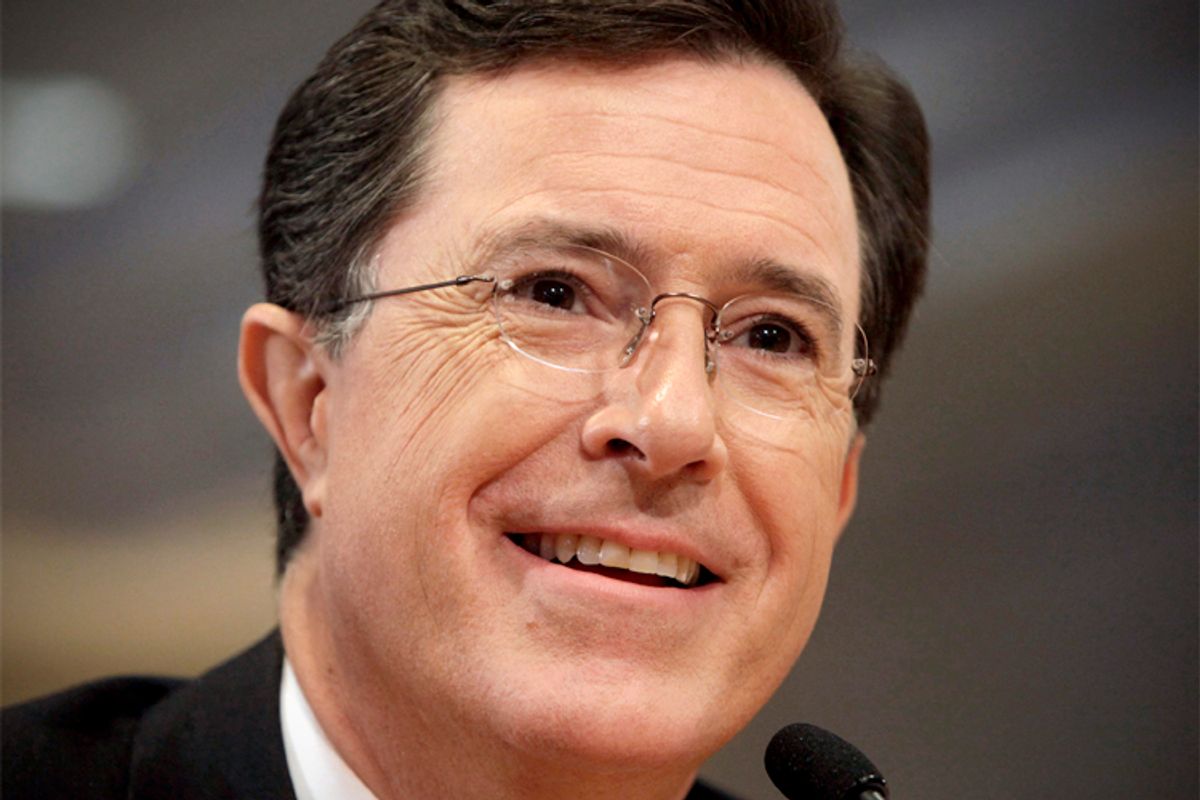 And so, it would eventually be remembered as that time that the fake conservative newsman did a bit on his show about race, and then the show's Twitter feed clumsily tried to riff on it, and everybody got in a fight over it on social media, and then it became a bit on the fake conservative newsman's show. Honestly, at that point, I would have had an easier time following "Game of Thrones." Well played, us. Or as Stephen Colbert put it Monday, "The system worked!"

On his first new show since the #CancelColbert hashtag became a huge enough story to merit its own Taiwanese animation, the host on Monday launched directly into the day's main news story: Stephen Colbert. The show opened with a segment envisioning if #CancelColbert had worked, with staffers removing boxes from the building, the set going dark and, of course, that iconic Native American shedding a single tear. Then, a Redskins regalia-clad Colbert awoke to a reassuring BD Wong guiding him through his "recent stressful events."

Colbert then went back into his White Man At a Desk persona, with a segment on complaints that emojis are not racially diverse enough. "White male is American neutral," he explained. "If you want to accessorize, you're free to add bells and whistles like melanin or vagina." It was, in case you don't get that this is a comedy show, a joke. He then addressed his whole "interwebs" weekend mess, boasting, "I'm still here. The dark forces who tried to silence my message of core conservative values mixed with youth-friendly product placement have been thwarted." And he dryly explained that "This is the real Stephen Colbert. I mean everything I say on this show."

Colbert did acknowledge that that fatal tweet, "I am willing to show #Asian community I care by introducing the Ching-Chong Ding-Dong Foundation for Sensitivity to Orientals or Whatever," didn't work outside of the context of his show's original joke about Washington Redskins owner Dan Snyder. "I understood how people were offended," he said. He also directly told his audience not to harass Suey Park, the "hashtivist" who started the Twitter war in the first place. He moved on to noting the extraordinary amount of media attention the controversy received (including Salon's own impressive seven stories on it – you're welcome, America) and asked, "Who would have thought a means of communication limited to 140 characters would ever create misunderstanding?" A Salon colleague Tuesday morning described the performance as "a strange mix of apology and double-down and media criticism and braggadocio, all filtered through a character." Which is exactly what it ought to have been.

The character of Stephen Colbert, all arched eyebrows and faux conservative outrage, offends some because no matter what, he's still a white man saying "Ching-Chong Ding-Dong." Fair enough. There's no question there's still a profound lack of diversity in American satire, in the writing staffs of "Colbert" and "TDS" and on the Onion, in the humor of "South Park" and much of what goes viral on "Funny or Die." As a white person, I can't tell someone who isn't my race what to be offended about. But what I can do is acknowledge that I'm glad when white comics don't ignore racism, but take it on in a manner that acknowledges their own privilege. I'm glad when talented people like Colbert keep shining a light on racism, even when it means taking heat for it themselves. What Colbert has done with his particular shtick, in a way that's different and often bolder than the likes of Stewart and company, has been to allow himself to become a racial stereotype. He plays the outraged white male, railing against "the p.c. police," a role he understands hits a little too close to home for everybody's tastes. But he fearlessly keeps doing it anyway.

Colbert was playing him again Monday, "the real Stephen Colbert" who means everything he says on his show. And when he said that he was concerned about Jonathan Swift's famed modest proposal to eat Irish babies, that character was brilliantly whipped up when he suggested we ought to "#CancelSwift." But if there was a moment when a regular person who happens to truly give a damn shone through, it was when he noted the original catalyst for the whole mess in the first place -- Dan Snyder's Washington Redskins Original Americans Foundation. It was, he observed, something "Twitter seems to be fine with, because I haven't seen shit about that."