"I was looked at like a disease": HIV's enduring stigma 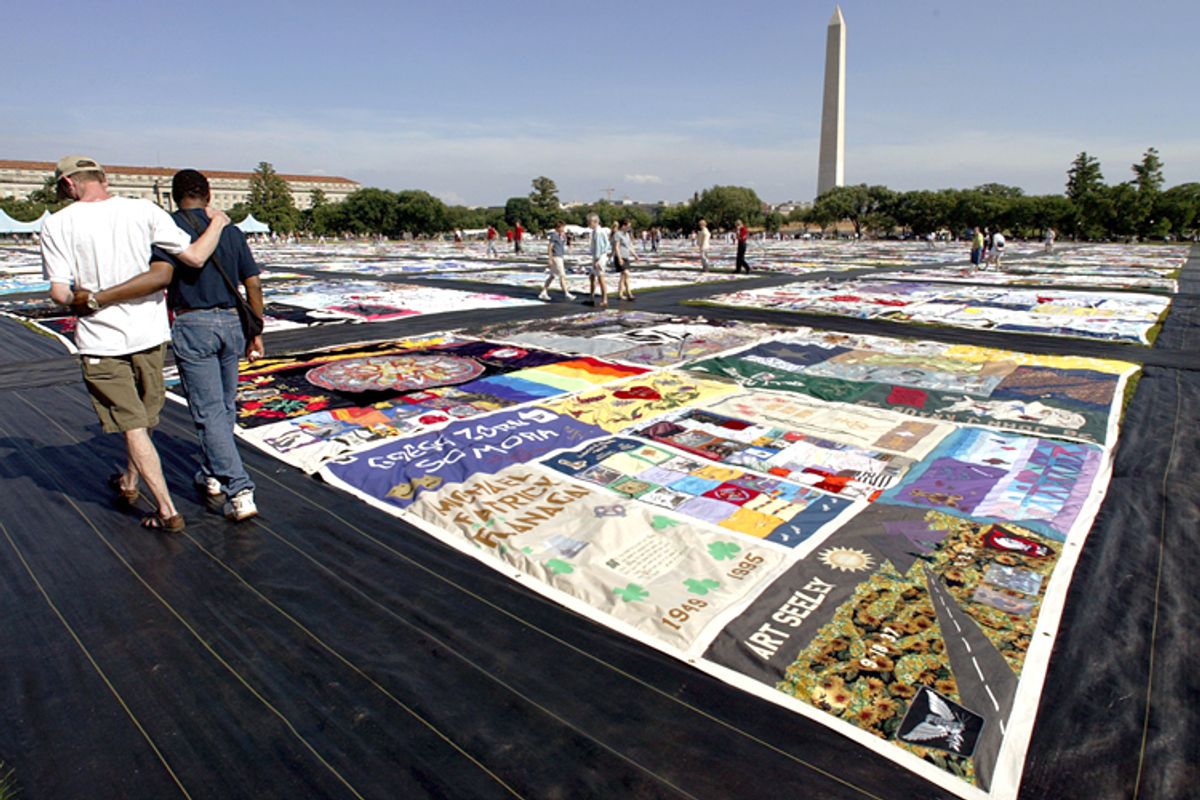 According to the most recent statistics from the Centers for Disease Control, gay men continue to be affected by HIV at disproportionate rates. Although gay men account for between 2 and 5 percent of the population, depending on estimates, they make up 56 percent of the population of U.S. persons living with HIV. Despite advances in HIV treatment and medication, contraction rates among men who have sex with men (MSM) have actually been rising in recent years, increasing by 12 percent between 2008 and 2010. This surge has particularly affected young MSM, whose rates of infection shot up by 12 percent in the same time period. The CDC’s 2010 figures estimate that there are 489,121 gay men currently living with HIV in the United States, which doesn’t include those who don’t know or aren’t out about their status.

But what is it like to live with HIV in 2014? I spoke to David Ernesto Munar, president and CEO of the AIDS Foundation of Chicago, who told me that the culture of HIV has been rapidly changing since he was diagnosed 20 years ago. “I was diagnosed in 1994 when there was only palliative care … I fully expected not to live past age 35. All around me there was evidence that was a reasonable assumption,” Munar said. “Back then, the only thing available was meds to help stall or prevent opportunistic infections or pain medications. The focus was on helping people die with dignity.”

According to Munar, 1996 marked a turning point, as gains in research and testing began to save people's lives. “Two years after I was diagnosed, medicine discovered the power of combination therapy, using multiple approaches to stop the spread of virus,” he explained. “Before then we were just stalling the inevitable.”

However, while HIV treatment has improved, Munar believes that some parts of the community’s relationship to the virus haven’t changed. “There’s still a tremendous trauma around living with HIV,” he said. “It’s been so stigmatized and associated with promiscuity, wrapped up in a narrative of people doing 'bad things.' Because of this, there’s been a tremendous sense of shame, blame and anxiety.” Among men who have recently contracted HIV, it’s common to ask questions like, “What does this mean about me?” and “Is this my fault?” After receiving his diagnosis, Munar felt afraid and alone, afraid to share what he was going through; HIV forced him back into a closet. He told me, “I bottled it up and put it away because the reality was too painful.”

It took Munar almost 10 years to get to a place where he could deal with the realities of being an HIV positive man, and he describes that process as “like a second coming out.” For Jonathan Van Nuys, that coming out helped save his life. Van Nuys is a nurse practitioner who works in HIV primary care at the East Bay Medical Center in Oakland, Calif. Van Nuys was diagnosed in 2004. He didn’t take it very well. “I grew up in the generation that grew up knowing about HIV, and my first exposure to the issue was Rock Hudson,” Van Nuys said. “I had an image of what somebody with HIV looks like.” I asked him what that image was. He responded, “They were old and frail, living in the Castro, and they disappeared very quickly.” Van Nuys was afraid to tell friends about what he was going through, worried that he would be thought of as a “failure” or pitied by those around him. “I didn’t want to be seen as ‘that person.’”

But after being diagnosed with Stage 4 cancer, Van Nuys quit his job and moved back home with his parents. After feeling trapped by the disease, one that kept him in the dark, Van Nuys knew he had to start living his life in a better way. Two years after his initial HIV diagnosis, Van Nuys finally came out to his family in 2006. They were incredibly supportive. “Their compassion helped me forgive myself,” Van Nuys explained. In dealing with his diagnosis, Jonathan Van Nuys believes that learning to talk about his status helped ease the stigma he felt. He said, “I realized that I could be a vehicle to increase awareness around HIV by simply being open about it.”

In opening up about his history, Van Nuys found out that there’s still a lot of misinformation around HIV in the community, and the hardest part of living as a positive gay man was how if affected his dating life. “There’s a real division in the community between positive and negative [men],” Van Nuys argued. He believes that divide contributes to a culture of silence and fear. “People think you could get it from kissing still,” he said. “It always shocks me when I hear that.”

Van Nuys once disclosed his status to a date after what had otherwise been a perfect night. “When I told him, he had his arms around me,” Van Nuys recalled. “But then his entire body language shifted. He crossed his arms and told me I should leave. I wasn’t looked at like a person. I was looked at like a disease.”

Unlike Van Nuys, Joseph Varisco was already in a relationship when he was diagnosed last year. A community organizer and LGBT rights activist, Varisco was in an open relationship with his partner, but after Varisco learned of his status, his initial reaction was “to shut down that kind of behavior," only hooking up with his partner. Varisco said, “For the first couple months, I was afraid [my sex partners] were at risk of exposure, so my sex with my partner was the only sex that I was having.”

Learning to communicate with his partner helped him navigate the realities of HIV as a sexual being. “We talked about the risks that were out there and how we could combat that.” In addition, the two went to the doctor together to ask questions about transmission and further educate themselves. That process helped Varisco begin to feel comfortable in his body again.

Although his relationship with his partner has changed and grown significantly in the past year, Varisco believes that his relationship with his doctor has been just as crucial to his journey. At the beginning, Varisco was put on Atripla, an HIV medication that destroyed his digestive system, mental health and spirit. After taking his pills each night, he would wake up the next morning with what felt like a horrific hangover. “The medication only caused me more stress and anxiety,” Varisco said, “and I thought to myself, ‘If this is my life here on out, I don’t want to do this.’”

However, his doctor quickly got him on a new medication, which made all the difference. “It really changes people's relationships to their bodies and their health when they feel like their body is being taken care of,” Varisco argued. Being lower income, he feels lucky to receive medical treatment and hopes to share that privilege with others. “It’s important that people within my community and my income range get to experience that.”

Varisco believes we need to make HIV testing and information more accessible, offering those services at clinics and pharmacies. “Your doctor usually will not ask you if you want to have an HIV test,” he explained. He thinks it would be “awesome” if it were automatically offered to everyone.

More normalization of HIV testing might relieve some of the stigma around the disease, stigma that Hadeis Safi has felt acutely. A child of Afghan immigrants living in Chicago, Safi’s diagnosis opened his eyes to how many people still treat HIV and those who live with the disease. “There are people who don’t want to be a part of my life due to what my status is,” he said. “I don’t hold it against them, as long as they aren’t a dick about it.”

Safi said that once while he was hanging out in a bar, someone pointed to him and blurted out that he had HIV. On a different occasion, he was sitting with friends and remarked about a gay couple he thought were attractive, suggesting that he would be interested in hooking up with them. A friend quickly warned him against it, telling him to "be careful.” Safi said, “Some folks just have this attitude about how they talk about other people who have HIV.”

After contracting HIV, it took some time for Safi to come to terms with his new relationship to his body -- taking daily medications and being more intentional about his health choices -- but it didn’t change his sexuality. Men who are recently diagnosed often feel like it’s the end of their sex life, and that shame can affect their sexual self-worth and how others in the community value them. Safi believes that this mind-set is because many men in the community still see HIV as “this dirty thing,” and he hopes to change as many minds as he can by being out about his status.

“I want these men to meet me for a drink and have a conversation, because we haven’t humanized it,” Safi said. “Until they meet somebody who they care about and understand as a person, they don’t understand that it could literally happen to anybody. That’s part of the reason that I’m so open. It’s part of who I am, so you’ll take me for who I am.”