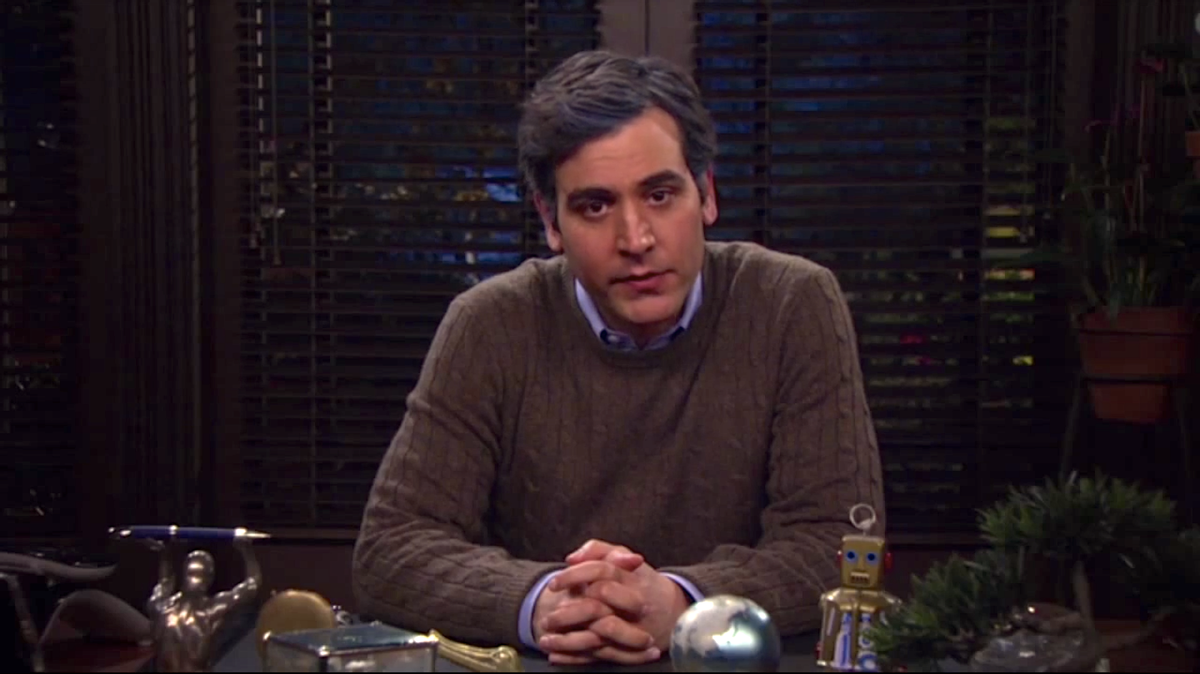 So, that happened. I didn’t start watching How I Met Your Mother until January of 2013. I’d caught a few of the episodes on rerun late at night on WGN, but not enough to really form an opinion of it. I don’t generally like sitcoms, never have. That’s not a “ooh, look at me I’m so elite and barely own a television” so much as a statement of preference. There are many preferences in the world. This one is mine. It was a good show, but others have written about that and here’s not the place for yet another review.

But in any case, I watched eight seasons on Netflix over the course of a few months, and then watched the ninth live. And when you’re watching a show straight through like that, there are certain things that annoy you less than they did the full time watcher, and others that annoy you even more. For instance, Zoe was annoying, but she was basically a blip, not around long enough to really develop the hatred you would if you watched it with week breaks between episodes for months and months. On the other hand, the mid-run drop off in the show’s quality becomes even more distinct. Watching an episode or so per day, you’re no longer in the lobster-slowly-boiling trap of a long-time watcher, and you can appreciate just how fast this series really did nose dive into being basically unwatchable.

Having watched the ninth season live, and suffering through the horrific first half of that season with everyone else, it was a relief to see the show get its legs again for the last ten or so episodes of its run, when it was really hitting on all cylinders (except that idiotic “son of a beeetch” catch phrase of Lily’s, who in the world ever thought that was funny?). Until those last five minutes.

The initial reaction across the Internet was overwhelmingly negative. Now we’re seeing a slow creep of contrarian articles about how the show had the “right” ending, etc. and that the show had balls to not give fans the ending that they wanted. That’s a pile of crap right there, but then we write on the Internet, so that’s our bread and butter.

I didn’t like most of what happened in the first 55 minutes of that finale. I pretty much agree with every single that Courtney said about devolving nine years of character development is sort of lousy storytelling. But I’m willing to give it to them because it was their story. It’s not how I would have written it, but it was still written well in some sense. If it had ended at the 55 minute mark, that would have been the takeaway. I wouldn’t have liked it, but the story was done and told.

I wasn’t even upset per se that Ted ended up with Robin. I was disappointed. I thought it was a bad direction for the story, and at odds with all the storytelling up to that point. The same with a lot of the future course of these characters’ lives. The same with the decisions to spend this entire season with halfassed hijinks at a wedding you’re going to drop a divorce on in a footnote. Or even further wasting all that time on pointless rambles when you could have spent half the season telling the story of these future events that irritated all of us, round them out and fill in the gaps to see how the characters got there. But fine, it wasn’t great, but it was the way you wanted to tell the story.

But what made that the worst series finale I have ever seen was the complete tone deafness of the final five minutes. That last hour is a series of melancholy mounting tragedies, and the way that life just sort of gets away from you. It was an ode to the time Ted had with his friends and wife, of a nostalgia for when he was younger and almost had it all. But hey dad, why don’t you go bang Aunt Robin?!?

It was like listening to the last haunting notes of Stairway to Heaven, followed by a moment of silence and then Krusty the Clown guffawing and some goofy ragtime starting up. “Mom’s been dead for six years”. No. She. Hasn’t. She’s been dead for six seconds to us the viewers. And not understanding that is a monumental failure of basic storytelling.

How I Met Your Mother Pajiba Sitcoms Tv