How profit-hungry Wall Street landlords are secretly trying to turn themselves into a modest, lovable trade group 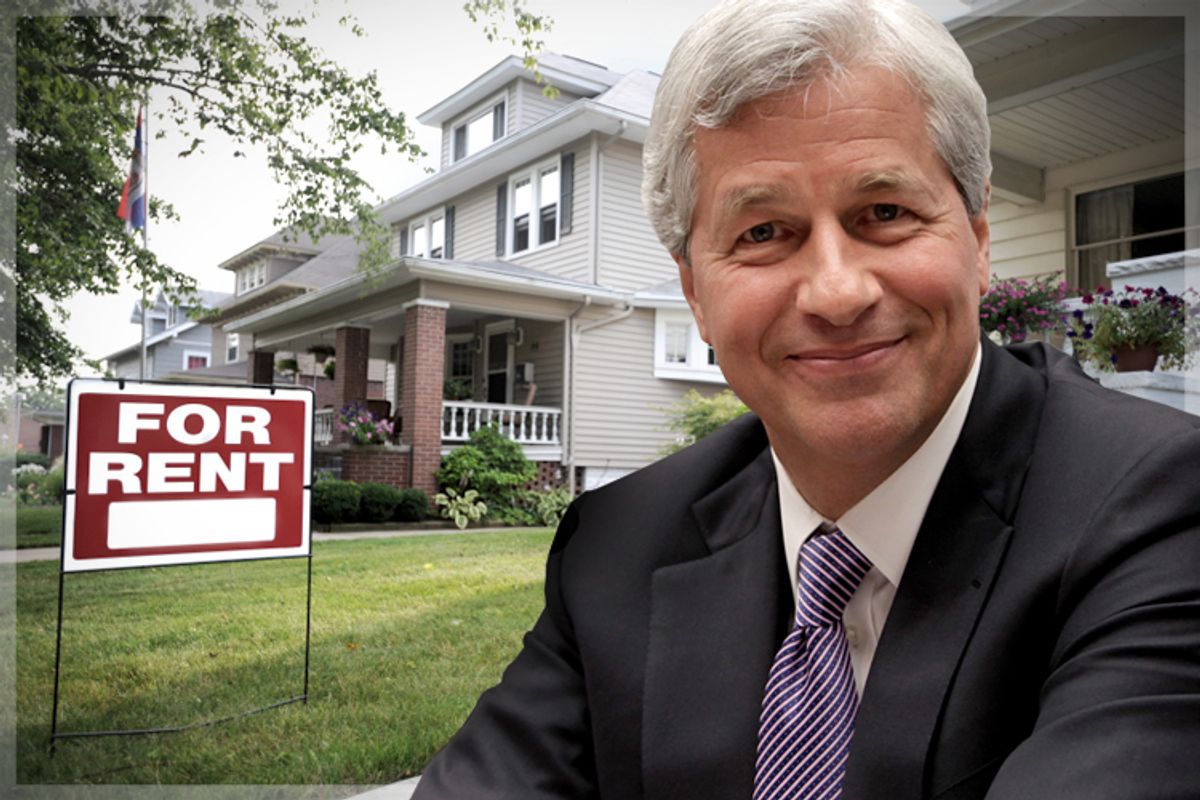 The Wall Street rental scheme, the mass purchase of 200,000 single-family homes by hedge funds and private equity firms to convert to rental properties, has run into some trouble. Complaints from renters have proliferated, alleging that repairs go unaddressed, leases violate local tenant ordinances and unnecessary evictions often occur due to negligence. The plan to sell bonds backed by revenue from the rental properties has also stumbled. Collected rents on the initial rental-backed security from private equity giant Blackstone fell 7.6 percent from October 2013 to January 2014, suggesting that the homes aren’t being occupied at a level necessary to make the deal work. The Standard and Poor’s rating agency declined to offer a triple-A rating for the securities, and with fewer foreclosed properties to buy and higher home prices, many investors have cooled on the idea.

Nevertheless, the firms who already purchased the homes and put the scheme in motion have plowed ahead. Colony Capital, American Residential Properties and American Homes 4 Rent have all floated their own rental revenue bonds.

And now the major players in this space have done what every industry of questionable merit does in response to hardship – they created a trade group to lobby in Washington on their behalf.

The National Rental Home Council, unveiled last week, seeks to make Americans comfortable with their new Wall Street landlords. And the backers – Colony Capital, Blackstone subsidiary Invitation Homes, American Homes 4 Rent and Starwood Waypoint Residential Trust – hired some of the most skillful operators in Washington to aid them: a lobbying shop made up of veterans from the Clinton White House.

The Glover Park Group put together the NRHC. (If this was a secret, it was fairly ill-kept, given that the first two followers of the NRHC Twitter feed are Glover Park Group employees.) Glover Park Group is a full-service public relations and lobby firm founded by former White House press secretary Joe Lockhart and other expats from the Clinton-Gore years. They’ve represented a large number of corporate clients over the years. According to the Center for Responsive Politics, GPG’s lobbying income hit $7 million in 2013, a new high, including plenty of work for the banking and real estate sector, from the American Bankers Association to JPMorgan Chase.

GPG has longtime ties to the private equity industry. In 2012, they set up the Private Equity Growth Capital Council, to push back against what they called an “inaccurate caricature” of Mitt Romney’s activities at Bain Capital. This actually started in the 2012 primaries, when Newt Gingrich tried to make hay of the Romney/Bain connection, and it continued when the Obama campaign stepped up the criticism. So these Clinton vets attacked Democrats for daring to speak up about the value-stripping activities of the private equity industry, and the effect on workers who too often got pushed to the side. Private equity’s main trade group paid GPG almost $350,000 for these services.

Private equity isn’t just a client of GPG; it’s an investor. The firm Svoboda, Collins made a “major investment” in GPG back in 2006. While no dollar amounts were disclosed, when GPG was sold in 2011 to the public relations giant WPP, it was described as a “portfolio company” of Svoboda, Collins. So private equity basically bought the Glover Park Group. And now we’re seeing the Clintonites over there helping to give back.

The Glover Park-directed NRHC message is pretty clear: These lovable private equity firms are merely “professionalizing the industry” of rental property management, while providing important benefits to the housing market by putting distressed properties back into circulation. This revives neighborhoods and creates jobs, according to the NRHC mission statement.

The NRHC website employs the familiar tactic of using big, friendly graphics to dismiss any concerns with the industry’s profit-making strategy (one banner screams “1,014 jobs!”). I mean, could you possibly have an issue with a stick figure holding a piece of lumber and a saw? And you can be sure of the rigorous nature of their home inspection process, because the stick figure is wearing a hard hat!

The talking points should arouse some suspicion. An infographic on the NRHC site asserts that 81 percent of renters report a positive experience from renting, neglecting to mention that this covers all renters, not just the ones living in single-family homes purchased by Wall Street landlords. A separate PowerPoint presentation claims that the industry does not compete with first-time homebuyers because they buy different kinds of properties. This varies with the actual experience of would-be homebuyers, particularly at the entry level, who report being shut out by all-cash competitors. Indeed, according to economists Amir Sufi and Atif Mian, home price gains over the last three years have been driven almost entirely by investor purchases, meaning that the impact on the overall market goes well beyond the individual purchases themselves.

Glover Park isn’t really targeting skeptics or even the public with their trade group. They want to influence policymakers. The creation of the NRHC comes just a few weeks after Mark Takano, one of the major critics of the Wall Street rental scheme in Congress, put out a report questioning the industry, and then asked federal regulators to investigate their activities. The NRHC comes along just in time to undercut Takano, offering the industry’s side of the story to lawmakers who typically have no problem hearing out the concerns of corporate lobbyists. This will help ensure that the Wall Street rental scheme can continue without any regulatory or legislative interference. The Clintonite ties of the Glover Park Group probably help the NRHC get their foot in the door among Democrats, while Republicans don’t need any special nudge to support corporations over renters.

The National Rental Home Council is actually a pretty mundane example of how Washington works these days. Policymakers rotate out of government and onto K Street, where they use their ties to the White House or Capitol Hill to get rich advocating for special treatment for even richer people (Blackstone CEO Stephen Schwarzman made an absurd $374.5 million just in 2013). No matter how many outside voices press for more investigation of the single-family rental industry and mounting evidence of lax property management, the big players have enough money to hire the insiders and make sure their money-making scheme runs into no disturbances. Whether renters get bulldozed over in the process makes little difference.

The fact that a bunch of corporate Democrats have facilitated this gambit shouldn’t surprise anyone who knows the history of the Clinton administration’s deregulation of Wall Street. Though in the end, if affordable housing groups and poor families had the cash to pay the Glover Park Group, they’d surely create the National Coalition of Renters for Fairness or something. The ideology at work here isn’t really Wall Street or Main Street, red or blue; only green.