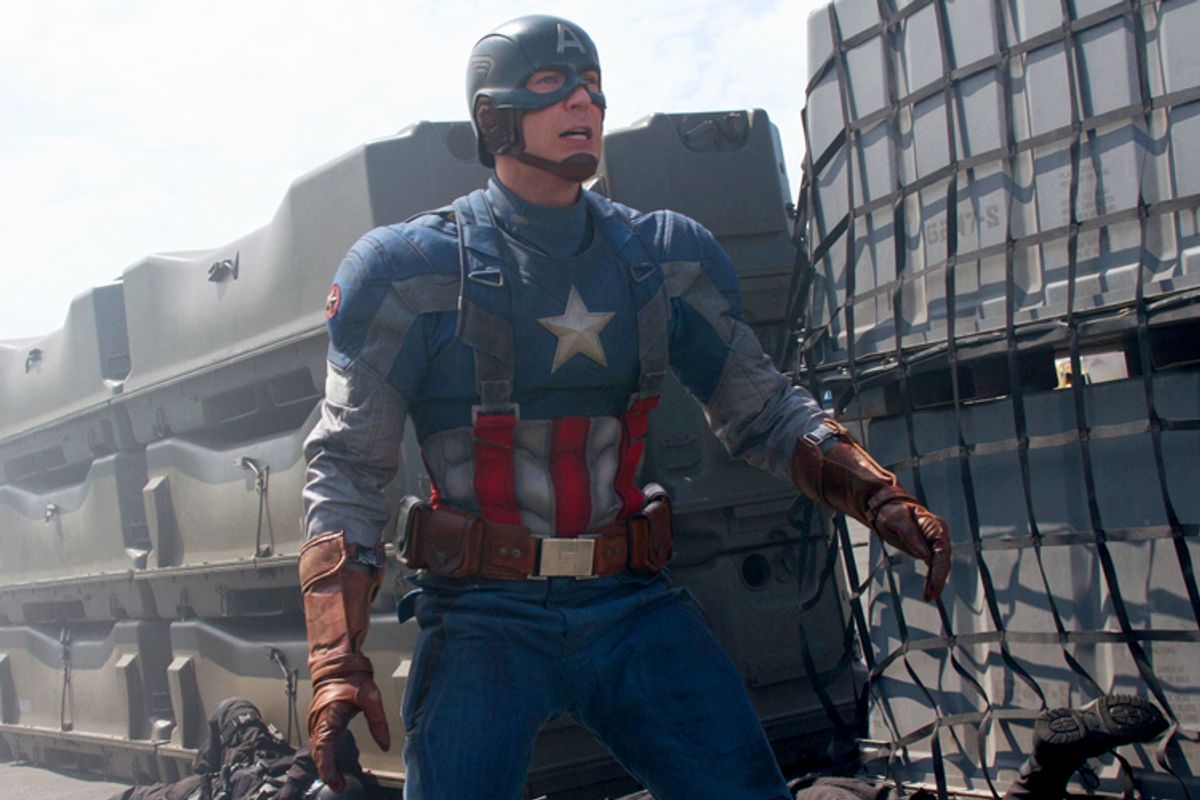 So the summer movie season has started when most of us haven’t put away the winter overcoats yet, and that’s only the beginning of the cognitive dissonance involved with “Captain America: The Winter Soldier,” the latest spectacle-sequel from the ever-metastasizing Marvel Comics empire. Directed by Anthony and Joe Russo, the duo behind the TV series “Community,” from a screenplay by the powerhouse writing team of Christopher Markus and Stephen McFeely, the second movie about Captain America offers an intriguing departure from superhero-flick orthodoxy, but also one that’s steeped in genuine comic-book lore. With its portrayal of an idealistic patriot uprooted from the Greatest Generation, set against a super-secret government agency run amok, it means to be highly contemporary while enlisting itself in the classic tradition of switcheroo espionage thrillers.

Problem is, “The Winter Soldier” turns out to be more interesting in theory than in practice, more fun to talk about than to sit through. That’s a subjective response, of course; it might be fairer to say that the effect of the film is very different from the alleged ideas behind it. I can tell you that Markus and McFeely (working from a story by Marvel veteran Ed Brubaker) have written a paranoid parable about the national-security state, in which the most revered institution in the Marvel universe turns out to have been corrupted from within. That makes the movie sound “subversive,” or something, but this purported anti-fascist tale is delivered in high-fascist incoherent action-movie style, as a dizzying, disorienting farrago of secret weapons, ripped bods, lonely masculinity and individual acts of bravado. The signal-to-noise ratio on “The Winter Soldier” is all messed up, and the net effect is self-canceling. I enjoyed the movie while I was watching it, or I thought I did, but all that’s left is an irritating buzz.

I know, I know: Put down the schoolbooks and chillax, Schopenhauer. It’s a movie! But even if we dial back the question to the level of whether this film will rock your jock and provide some empty-headed thrills, I think the answer is closer to “kind of” than “abso-freakin’-lutely.” I liked the dense plotting of the script – which will require some gymnastics to talk about without spoilers -- and Chris Evans makes an agreeable stranger-in-a-strange-land hero, a chemically enhanced super-warrior who’s been on ice since the end of World War II and is still trying to catch up on consumer culture. When Evans’ Steve Rogers befriends a more human-scaled soldier named Sam Wilson (Anthony Mackie) during his morning runs around the Reflecting Pool on the National Mall, Sam tells him the answers to any questions he may have about the course of the 20th and 21st centuries can be found in Marvin Gaye’s “Trouble Man” soundtrack. Which is kind of brilliant and true. (Steve seems to be up to speed on the fact that soldiers who look like Sam can be officers now, and aren’t confined to segregated units.)

So, yeah, there’s stuff to enjoy: Evans and Mackie have a relaxed chemistry, Samuel L. Jackson gets a brief turn as Nick Fury, the garrulous and pragmatic director of SHIELD, and Scarlett Johansson, more or less operating on cat-suit autopilot, is back as former Soviet seductress-assassin Natasha Romanoff, aka Black Widow. (This is only Johansson’s second least-human character of this week, after Jonathan Glazer’s sci-fi nightmare “Under the Skin.”) I suppose the writers are pushing Black Widow and Captain America toward each other, at a glacial pace, but I kind of like the shtick about her constantly trying to set him up with more appropriate women: “That nurse who lives across the hall from you – she seems nice!” This movie also features a tastefully oily supporting turn from Robert Redford, as a senior U.S. official and old friend of Nick Fury’s, who turns out to be pursuing his own agenda. Redford never needs to seem excited to deliver a combination of menace and power; it’s like a nifty little seminar in movie acting. (As Al Pacino supposedly told Jesse Eisenberg: “Just because they say ‘Action’ doesn’t mean you have to do anything.”)

So Cap and Black Widow are sent to the southern Indian Ocean – uncomfortably close to the presumed site of the missing Malaysian plane, as it happens – to recover a hijacked SHIELD espionage vessel from pirates. That mission doesn’t go entirely as planned, and Nick Fury is badly injured by fake cops after a Washington street battle involving a mysterious masked figure – yes, it’s the Soviet answer to Captain America, a human weapon known as the Winter Soldier. With that, the whole SHIELD edifice begins to fall apart. Longtime comics readers will recognize this episode as a universe-shifter, one in which the underlying presumptions behind a narrative franchise come unglued: Who are the good guys, anyway? Is SHIELD any better than its post-Nazi doppelganger, HYDRA? Is Nick Fury, or Redford’s character, a double agent and if so for whom? Who is to benefit from the fleet of low-flying armored hovercraft-spaceship thingies SHIELD is about to put into the air to survey the whole world 24/7, Panopticon style?

Of course, this is also the plot of a dozen or more thrillers of the past few years (especially the Jason Bourne franchise), in which rogue elements have undermined U.S. intelligence and it takes one honest man to kick ass, take names and set it all to rights. There’s nothing fundamentally anti-authoritarian about this kind of movie, which is just cashing in on generalized mistrust of government and defaulting to a nostalgic John Wayne ethos of individual heroism. Institutions are inherently corruptible, so we need a strong leader, in this case one who is 95 years old and imbued with the values of a bygone generation. Whatever you make of that message, it has nothing to do with supporting democracy or opposing fascism.

This movie will evidently be a big success, which suggests we have reached a tipping point where neither critics nor audiences nor anyone else can tell action choreography that has some sense of physical space and a coherent visual aesthetic from stuff that’s just a whole lot of super-fast cutting and digital clutter. If “Captain America: The Winter Soldier” is far from the worst offender in this regard, the Russos display no particular affinity for fight scenes, which zoom past in a high-energy blur that’s meant to be exciting but struck me as entirely generic and forgettable. We can thank Michael Bay for this one, I think: Amphetamine-fueled editing, where we get four or five or six shots a second, coupled with elaborate green-screen digital fakery, is what “good” or at least popular spectacle cinema is now.

To say that this revved-up action aesthetic is monumentally boring and not actually fun, or to observe that a movie that purports to convey a political message reveals its true nature as a corporate assembly-line product in those moments, is to be a Trotskyite troglodyte killjoy, halfway between embarrassing and flat-out wrong. We all understand that the overstimulated visual fizz of this kind of movie is meant to signal pleasure, and so I guess it does. We also understand that a movie about a dude in red-white-and-blue stretch pajamas who flings his shield at people is not a political allegory about the real world, or at least not in a good way. It needs to seem cool enough that we want to watch it despite its obvious silliness, and viewed through that prism of canny analysis, the craftsmanship of “Winter Soldier” is first rate.