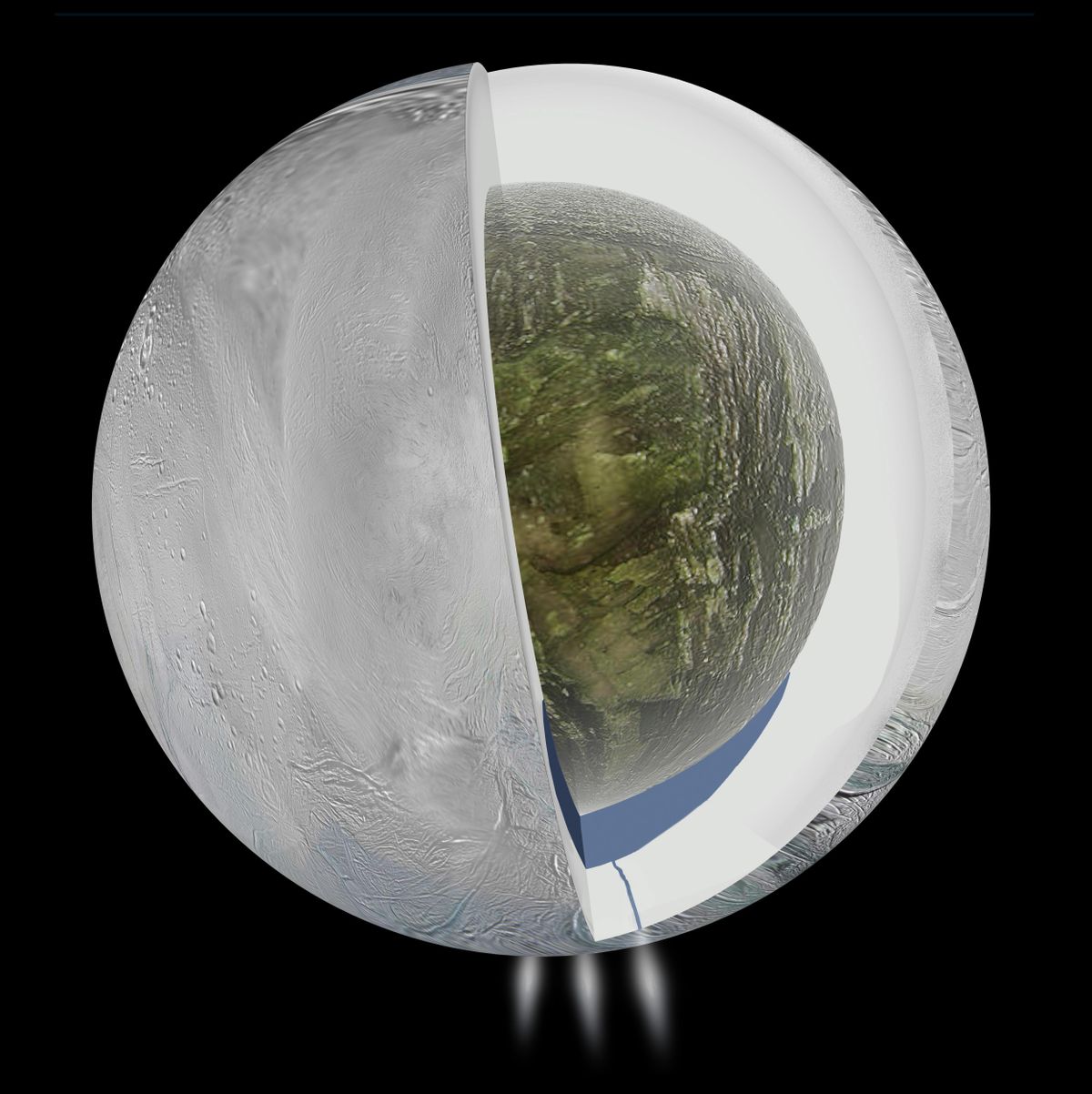 This diagram illustrates the possible interior of Saturn's moon Enceladus based on a gravity investigation by NASA's Cassini spacecraft and NASA's Deep Space Network, reported in April 2014. The gravity measurements suggest an ice outer shell and a low density, rocky core with a regional water ocean sandwiched in between at high southern latitudes. (NASA/JPL-Caltech)
--

Today NASA announced that its Cassini spacecraft and Deep Space Network have uncovered evidence that one of Saturn's moons, Enceladus, may have a watery ocean beneath a layer of icy crust. This discovery would make Enceladus a possible home for  extraterrestrial microbes -- otherwise known as other life in our solar system.

In 2005 Cassini discovered ice and water vapor belching out in proximity to Enceladus's south pole. Since then, researchers have theorized that water may be lurking beneath the frozen surface. According to a release from NASA, "The new data provide the first geophysical measurements of the internal structure of Enceladus, consistent with the existence of a hidden ocean inside the moon." The findings will be in the April 4 issue of the journal Science.

The researchers used the Doppler Effect, also used in a radar gun. According to the data and measurements of gravity variations, there is an ocean around 6 miles deep. It lays beneath a 19 - 25 mile thick ice shell. The moon itself is only 300 miles in diameter.

Enceladus is now on the short list for solar system locations that might have microbial life. The spacecraft Cassini has flown by Enceladus 19 times, but three specific "flybys" from 2010 to 2012 gave researchers the precise measurements. Cassini-Huygens is a cooperative mission between NASA, the European Space Agency and the Italian Space Agency.

Though there cannot be complete certainty that the ocean beneath the ice is where the water plumes are coming from, the possibility is promising. Linda Spilker, Cassini's project scientist at NASA's Jet Propulsion Laboratory in Pasadena, said in a release:

"Material from Enceladus' south polar jets contains salty water and organic molecules, the basic chemical ingredients for life. Their discovery expanded our view of the 'habitable zone' within our solar system and in planetary systems of other stars. This new validation that an ocean of water underlies the jets furthers understanding about this intriguing environment."