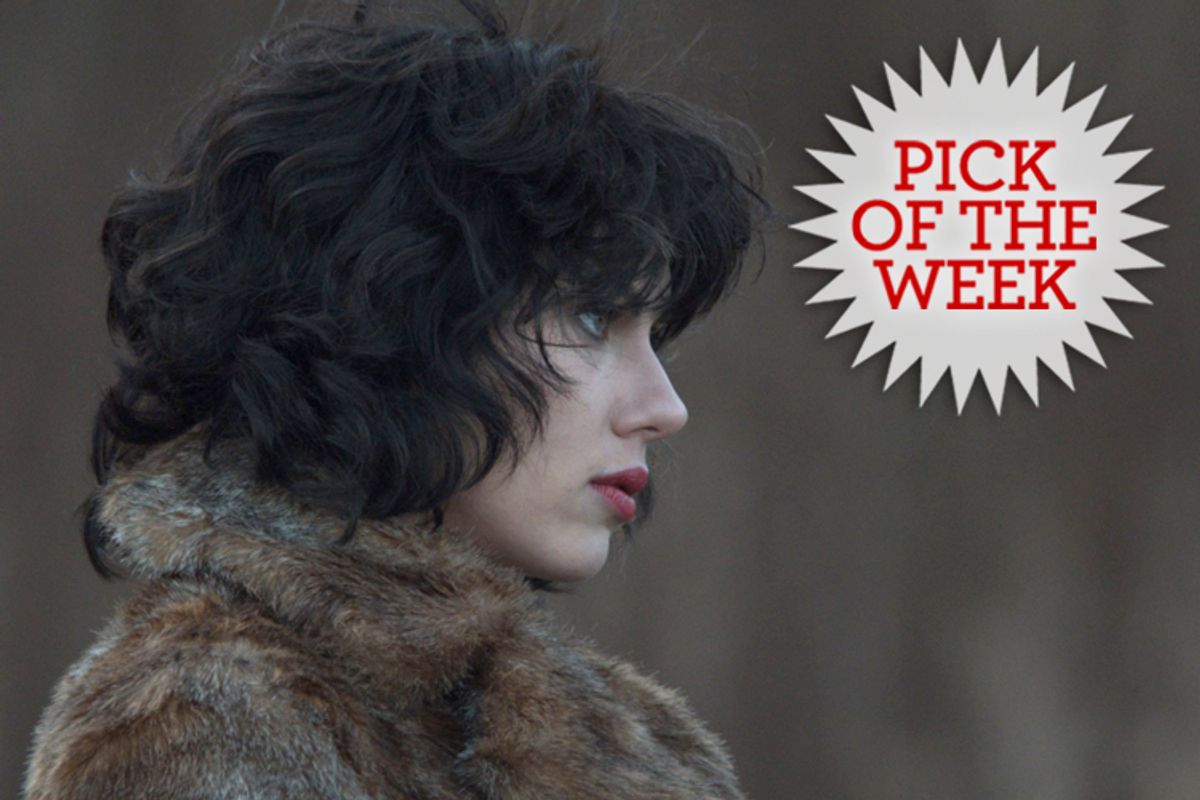 If I tell you that Jonathan Glazer’s “Under the Skin” is one of the strangest and most disturbing science-fiction films of recent years, it’s a true statement that points you in entirely the wrong direction. If I add that the movie also involves Scarlett Johansson taking off her clothes on several occasions, I’m leading you into a trap almost as surely as Johansson’s character leads the men she picks up on the Glasgow streets. It’s almost as if Glazer, previously the director of “Sexy Beast” and “Birth” and a bunch of music videos for Blur, Radiohead and others, has given himself an assignment: Make a visionary, haunting and utterly distinctive sci-fi picture featuring naked ScarJo, and make it unbearably frustrating for anyone who’d be drawn to that description.

“Under the Skin” is a deliberately unfriendly and upsetting film that makes Lars von Trier look like Spielberg. It’s a critic’s darling if ever there was one, commercial Kryptonite made by someone who obviously has the chops to please the audience but doesn’t care to. If you’re one of those people who feels obscurely insulted by movies that resist the dominant paradigm of the entertainment industry – the three-act structure, the discount-store psychological realism, the quasi-medical delivery of “pleasure” and “satisfaction” – then prepare to get your knickers in a twist, as the people in this movie might say if you could understand them. “Under the Skin” has no characters in the normal sense, and only the barest, buried skeleton of a plot. What little dialogue the movie contains is muted, largely unnecessary and often delivered in Glaswegian dialect so thick that I imagine Londoners will struggle with it, while Americans will catch about every third word.

Indeed, the sporadic bits of talk in “Under the Skin” are sound rather than information. This might sound like an outrageous comparison, but it reminds me of the way Charlie Chaplin began to use sound in his films, once he finally realized he had to. This stark and intensely controlled film is the work of a powerful visual stylist and storyteller, one who looks like he belongs on the short list of directors who have carried the narrative methods of the silent era deep into modern cinema: Stanley Kubrick, Akira Kurosawa, Terrence Malick, Andrea Arnold. When Johansson’s nameless character – with her dark brown shag 'do, fake fur coat and skin-tight jeans, she looks like a youngish single mom on the prowl – is surrounded by a gaggle of young women in a parking lot and carried along with them into a nightclub, we literally can’t understand a word they say to her. But it’s a remarkably pungent scene, capturing a mood, a setting and a predatory but confused character’s struggle to understand an alien environment.

Earlier, when Johansson picks up a roguishly handsome lad on the street while driving around in a panel truck, pretending to be lost, we hear their interchange but really don’t need to. The signals she’s sending have little or nothing to do with what comes out of her mouth, and she’s looking for a guy who responds to them in exactly the right way. She’s picky, but her criteria are never explained; sometimes she chats a guy up and moves on, and sometimes she gives him a lift, drops him off and keeps hunting. Sometimes, though, she takes him home and … but let’s stop there. Other reviews have already described the basic premise of “Under the Skin,” as far as we can make it out. Who or what is Johansson’s character? Well, you’ll get the basic idea right away, and let’s just say that “hunting” is definitely the right word. She has a confederate, a guy in leather on a motorbike who never speaks but seems to run errands for her, keep a lookout and clean up after her mistakes. We can only infer the nature of their relationship, but it’s not good news for you and me if we cross their paths.

One of the many startling things about “Under the Skin” is how complicated and distressing a story can be told with almost no dialogue and absolutely no explanation or back story. On one level this is a horrifying, surreal and possibly allegorical tale about male-female relationships and the link between sex and the death wish, and on another it’s a work of downscale British social realism where you can feel the damp and the cold, the dismal blocks of “council flats” (i.e., public housing) and the second-rate suburban houses. We experience the sometimes barren, sometimes beautiful Scottish landscape alongside Johansson’s character, whose adopted persona is that of a woman from England running some complicated family errand that’s gone awry. In one of the movie’s most memorable sequences, when Johansson appears to be struggling with the costs and consequences of her assumed human identity, Daniel Landin’s camera adopts her point of view, moving through the ordinary street life of Glasgow, all those shoppers and office workers and pubgoers unaware of the monster in their midst.

It’s easy to crack jokes about all the affectless or manipulative or semi-human characters Johansson has played over the last year: a caricatured Jersey princess in “Don Jon,” an operating system in “Her,” a reformed KGB assassin in “Captain America: The Winter Soldier,” which also opens this week. (In that movie, she plays a character called Black Widow; in "Under the Skin," she is a black widow.) But this is a remarkable performance that exemplifies the discoveries Johansson has apparently made about herself: Naturalistic drama really isn’t her space or her instrument, but she’s brilliant as a character we can’t fathom and are never sure about. There are a couple of wrenching scenes in “Under the Skin” that are undeniably challenging and may be described as sadistic, even though Glazer shows us almost no violence. In one, she simply stands and watches, apparently unmoved, while a tragic beach episode unfolds that leads to the death of an entire family and their dog. In another, she picks up a young man on the street who does his shopping late at night for painfully obvious reasons – his severely disfigured facial features. She’s either unaware that she’s treating him with needless cruelty or doesn’t care.

But these events apparently do affect her, although Glazer and screenwriter Walter Campbell (taking considerable liberties with Michel Faber’s acclaimed novel) illustrate Johansson’s apparent soul-searching through her actions, never through words. After the liaison with the man with the deformed face goes wrong, she makes an effort to escape her destiny, tentatively exploring such delights of earthly existence as chocolate cake and sex with a well-intentioned bachelor who offers her comfort and shelter. In a normal movie, even one that began with this one's unforgiving premise, cake and screwing would be seen as redemptive, as fundamental pleasures of human life that make up for all the bad stuff. In case you hadn’t picked that up by now, this potent and mysterious nightmare is not a normal movie.

”Under the Skin” is now playing in New York and Los Angeles, with national release to follow.