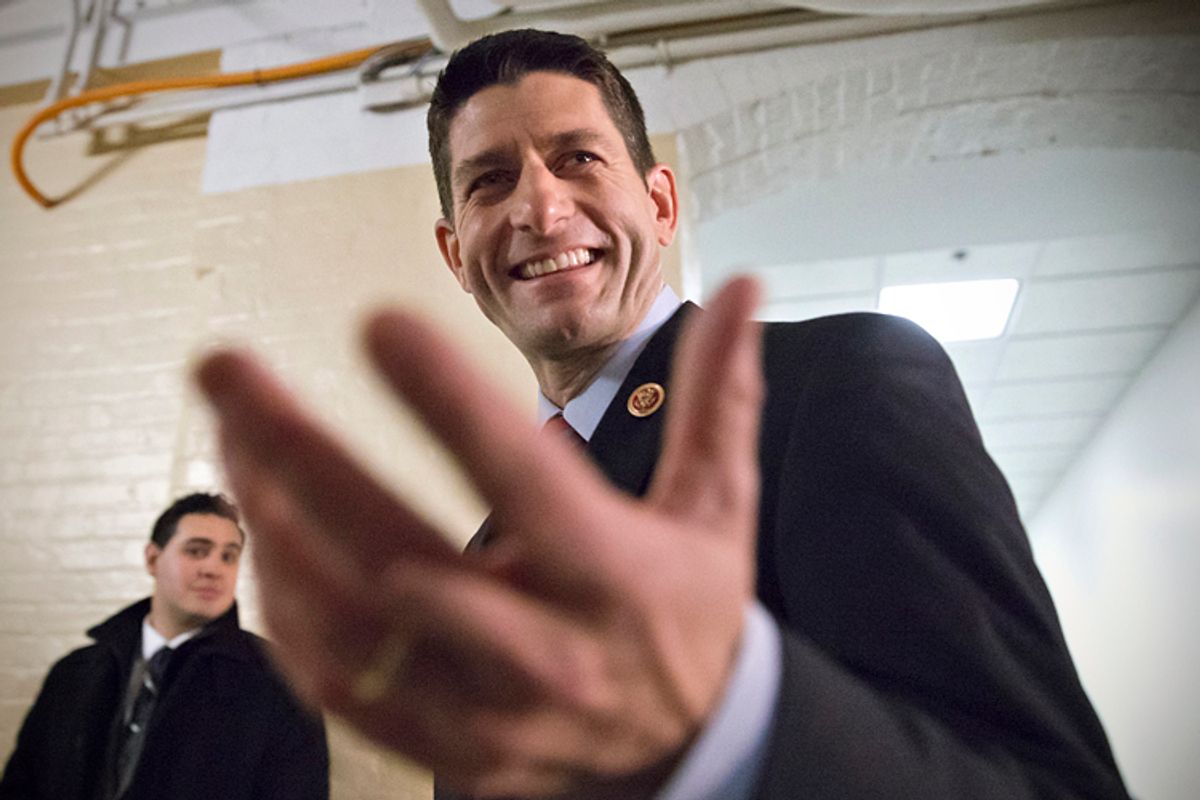 Democrats are jumping all over Paul Ryan for telling Bloomberg TV that if Republicans repeal the Affordable Care Act, they won't reimplement Obamacare's popular requirement that children can stay on their parents' health insurance plans until they're 26.

I don't have a full transcript, but the quote in this Washington Post story actually reveals a great deal more about Republicans' post-Obamacare health policy than their possible opposition to insuring young adults.

"If you look at these kinds of reforms, where they've been tried before — say the state of Kentucky, for example — you basically make it impossible to underwrite insurance. You dramatically crank up the cost. And you make it hard for people to get affordable health care."

People who follow health care reform closely will correctly note that there's nothing new here. But for those who don't, Ryan's focus on underwriting, not an allusion to so-called "young invincibles" is the key tell. Because underwriting is the main mechanism insurers used to practice price and coverage discrimination against people with pre-existing conditions.

Before the ACA, most states didn't guarantee coverage to the ill, or prohibit price discrimination against them. Ryan's correct that guaranteeing coverage and prohibiting price discrimination is a recipe for much higher premiums, but only because he omits the individual mandate, which ensures that state risk pools will be actuarially balanced. Leave out the mandate, and the insurance industry will likely end up existing to sell very costly health plans to sick people.

But Obamacare doesn't leave out the mandate. And thus, the law can guarantee insurance to everyone without requiring anyone to disclose private details of their health histories to their insurance company, and hold premiums down simultaneously. Anyone who's signed up for pre-ACA insurance and for ACA-compliant insurance can attest to the fact that the elimination of intrusive underwriting forms is a great advancement. All you have to disclose now is your age and tobacco usage.

But Paul Ryan wants to bring back underwriting. Because Republicans really don't believe that insurers should be prohibited from discriminating against the ill. He and other Republicans will vaguely claim to support setting up state-based high-risk pools for people with pre-existing conditions. Coverage ghettos of a sort for the ill. That would be better than nothing if they were genuinely committed to financing them. But financing them would cost hundreds of billions of dollars a decade, and the one time House Republican leaders tried to come up with a tiny fraction of that cost for Obamacare's transitional high-risk pool program, conservatives rebelled and the legislation failed.

I get why Democrats are focused on free insurance for children under 26. It's very popular. Opposing it is politically very damaging. And "underwriting" is kind of complicated. But the former was just a flub, while the latter actually tells the entire story.