Ruined by Woody Allen: What does Scarlett Johansson want? 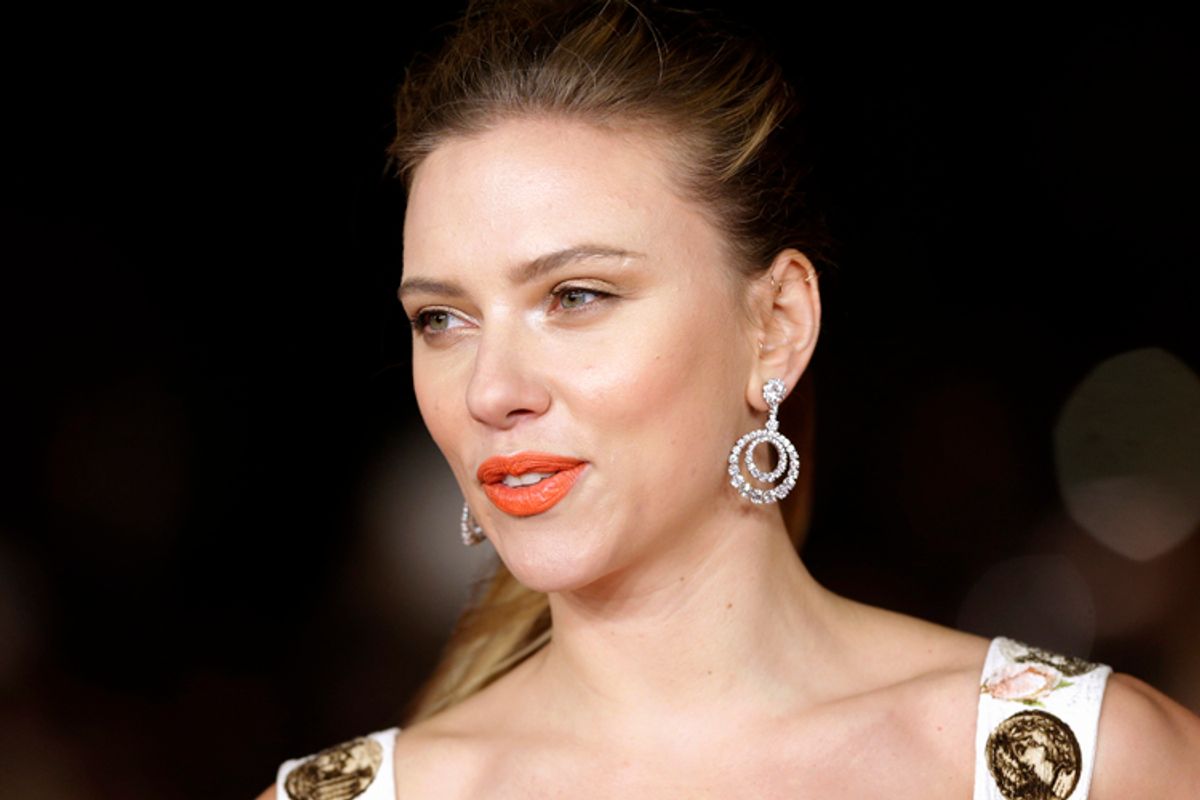 Scarlett Johansson's had a long career of always being miscast.

Since her breakout role in "Lost in Translation," in which she transcended being several years too young for the part with a low-key performance perfectly suited to the film, Johansson's been the square peg of Hollywood. With two new and radically different films -- "Captain America: The Winter Soldier" and "Under the Skin" -- just out, it's as apt a time as any to assess just what she brings to an industry that, until very recently, hasn't had a clue what to do with her.

If Johansson is perceived to have coasted on her appearance and not to be much of an actress, it's because her image got set in amber in the mid-2000s, with her much-ballyhooed creative partnership with Woody Allen that yielded diminishing returns. She gave the director what he apparently wanted, little more than sultriness, in 2005's "Match Point" -- so well, in fact, that he cast her as a nebbishy journalist in 2006's "Scoop." "Vicky Cristina Barcelona," in 2008, merged the two, with Johansson playing a sex object who occasionally made off-kilter quips that sounded strange coming from her mouth. It's a great movie in which Johansson is the only character to lack much character -- her fungibility, indeed, is a plot point -- and the association between Allen and Johansson hasn't been renewed since.

The director is famous for giving no direction whatsoever, and Johansson apparently suffered for that: In each of their movies together, Johansson is low-energy in a way that was appealing in "Lost in Translation" but is anxiety-inducing in the context of one of Allen's farces. It was as though she, free from any directorial advice, got into the habit of redoing her "Lost in Translation" performance, whether or not it fit a given movie's tone. Unlike past Allen "muses," including Diane Keaton, Dianne Wiest and (yes) Mia Farrow, Johansson seemed to be bringing little to the table other than her much-remarked-upon appearance.

In one of those "Nicole Kidman was supposed to be in 'Mr. and Mrs. Smith'" counterfactuals, the Johansson-Allen thing almost never happened -- Kate Winslet was cast in Johansson's role in "Match Point," then dropped out. Winslet in "Match Point" would have been what was best for everyone: It was a role to which Winslet would likely have brought more imagination, getting her the Oscar she spent the 2000s chasing. And Johansson would have avoided both being popularly imagined as an affectless sexpot and getting into some actorly bad habits she's only beginning to break.

Before "Match Point," Johansson had been a promising young actress. The doubling-up of "Lost in Translation" and "Girl with a Pearl Earring" in 2003 put her on a path to be universally respected, to get the rare good roles written for women. And yet, due to a mixture of presumably limited options, iffy choices and a very specific image problem -- Natalie Portman, say, is a "classy" star, while Johansson is famous more for her body than her skill -- the roles, post-"Match Point," asked her only to be sexually appealing ("The Black Dahlia") or asked nothing of her at all ("The Nanny Diaries"). A Johansson character would be suffused with a calm that bordered on the lobotomized, an availability that was less enthusiastic and more unconcerned with anything happening around her. Johansson's characters wanted nothing; it was less clear what the actress wanted.

By the time they appeared together in (and weirdly pretended to be friends to promote) 2008's misbegotten regals soap opera "The Other Boleyn Girl," Portman appeared to be slumming it, but the movie was right in Johansson's wheelhouse. It was pulpy, prurient and yet weirdly bloodless, as though it were conserving its energies for a bravura second act that never happened onscreen.

Johansson finally began to break out thanks to a combination of factors -- among them her stage work, which won her a fairly controversial Tony for "A View from the Bridge" in 2010. It was widely believed (thanks in part to Tonys won on the same night by Catherine Zeta-Jones and Denzel Washington) that Johansson's persona helped her to the trophy over four far less famous co-nominees, though in fact she'd finally managed to shed the persona. There were a few more junky movies Johansson failed to elevate (among them "He's Just Not That Into You" and "We Bought a Zoo") standing between her and her breakthrough.

Oddly, "The Avengers" (obtained in another stroke of luck, when contractual obligations precluded Emily Blunt from taking the role) ushered in Johansson's new phase. The actress, appearing in a surefire hit, was free to assume an attitude other than sangfroid; in a sea of interchangeable human-growth-hormone-y bros, Johansson stood out not merely as the only woman but as one of the most charismatic characters in the movie. Ennui doesn't work in a superhero movie, and the many millions who saw "The Avengers" were introduced to a star who they'd never seen before. Johansson was having fun. Of course no one took it really seriously -- it wasn't until she took her body offscreen entirely, in her flirtatious and heartbreaking turn in "Her," that we all realized she was good at acting.

But in "The Avengers," physicality was largely taken out of the equation -- though, like her costars, Johansson wore tight clothes onscreen, her entire plotline and character history foreclosed the possibility of sex as much as did the fact of her character's lack of a body in "Her." The camera, too, was far more concerned with Chris Hemsworth's body than hers.

The most valuable lesson from all this comes from the fact that Johansson had been less strong in the disjointed "Iron Man 2"; she's as good as the movie in which she appears. Unlike the greatest of actresses, she can't elevate crummy material, but she can be pushed to do something more than project cool.

"Captain America: The Winter Soldier" features Johansson in her action-hero mode -- the sort of hit that eluded her throughout her early career, it frees her up to do "Under the Skin," a truly risky movie that largely chucks dialogue in order to tell a creepy, impressionistic story. It's not the sort of movie her contemporaries are making. Famous for more than a decade, Johansson is trying doubly hard to prove there's a reason.

One sees what she's running up against in examples like her recent "profile" in the New Yorker, for which Johansson's team granted film critic Anthony Lane extremely limited time to report, ultimately, that Johansson is beautiful. Johansson's intellect haunted the piece like a ghost denied corporeal form, speaking itself in half-sentences before Lane went on to describe how Johansson "seemed to be made from champagne."

What pronouncements Johansson was able to make about the West Bank and about Woody Allen in the New Yorker piece, and others she made in the Guardian, were objectionable to some (myself included). But the mere fact of Johansson's subjecting herself to interviews in highbrow publications -- she's not a Cosmopolitan or People girl, for now -- and taking tough questions means that she's willing to be pushed.

The model for Johansson's career going forward is an unlikely one, perhaps: Nicole Kidman. The elder actress spent her early career projecting absolutely nothing onscreen, making her terrific playing a sociopath in "To Die For" and forgettable elsewhere. But Kidman, post-divorce and post-"Moulin Rouge" breakthrough, put herself in the hands of some of the world's most idiosyncratic and talented directors (including "Under the Skin" director Jonathan Glazer, in whose "Birth" Kidman shone).

Kidman is not a box-office draw -- she has no "Avengers" -- but she makes a couple of truly interesting films a year. She is taken seriously by critics and the press not simply as a beauty but as an actress with real agency in choosing roles and choosing what she does with them. She got there in a different way, but she has what Johansson wants. It's tough, perhaps, to be a beautiful woman who wants to be taken seriously as an actress.

But you can push through it. The problem for too long, solved for now, had been Johansson's seemingly willing blankness, her willingness to let her talents get lost, as it were, in translation.