"Game of Thrones" gets more sexplicit: So, the Red Viper likes guys ...

"Game of Thrones" features graphic sex of all varieties. But how much is just full frontal for full-frontal's sake? 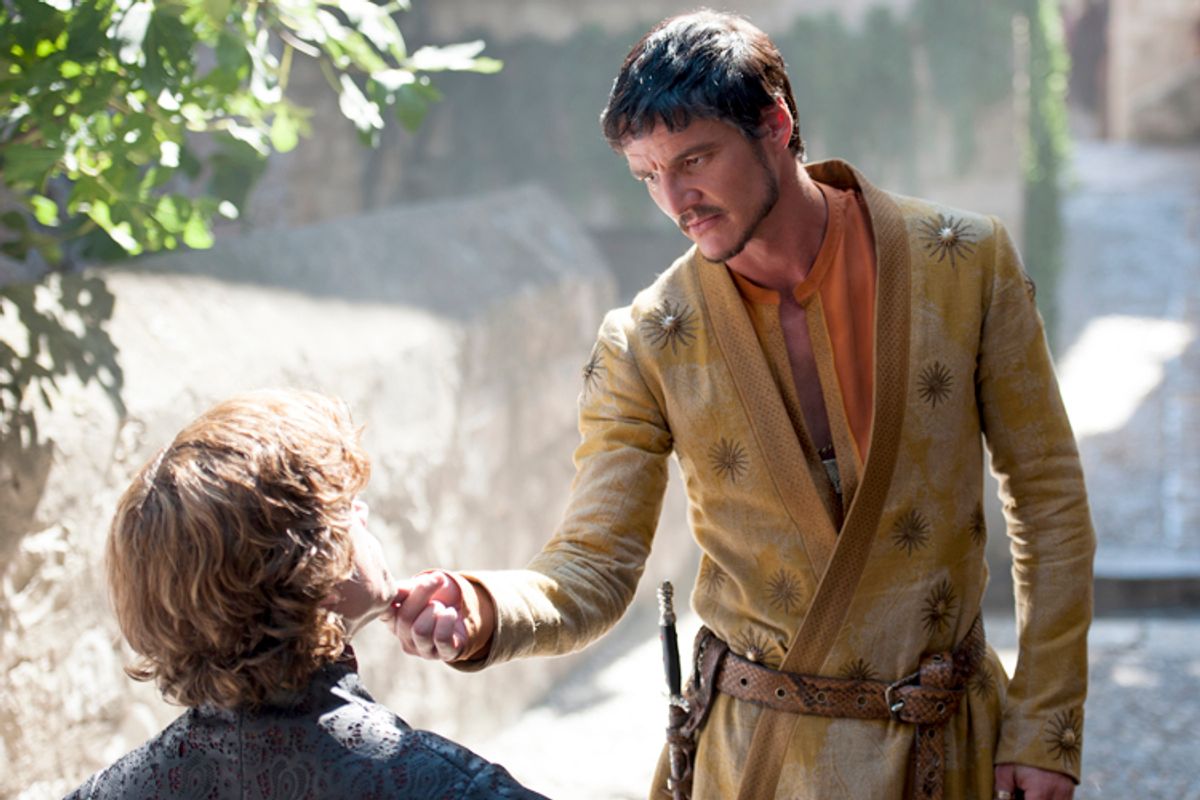 This Sunday, the Season 4 premiere of “Game of Thrones” features the titillating arrival of a much-anticipated character from George R.R. Martin’s vast lore: Oberyn Martell, a prince of Dorne known more widely as the Red Viper. A renowned Dornish warrior, Martell (Pedro Pascal) gets his melodramatic nickname specifically from what might be described as a handiness with poisons. But it isn’t Oberyn’s pharmacological expertise on display when first we meet him. We are introduced to Martell as he chooses from a variety of female whores for himself and his concubine Ellaria. Not satisfied with the selection, Oberyn also procures the procurer – a male – for his impromptu orgy.

I try not to think back to the source material when watching HBO’s “Game of Thrones.” It’s difficult, as I enjoyed Martin’s series of books immensely. But I realize that the TV show is its own animal and should be appreciated on its own merits. That said, the bawdy introduction of the Red Viper sent me running to the ever-useful “Wiki of Ice and Fire” before the episode even wrapped. I found what I was looking for within the first paragraph of the entry describing the much-anticipated character:

“Prince Oberyn Nymeros Martell, known as the Red Viper, is a member of House Martell and is Prince Doran's hot-headed younger brother. He has eight bastard daughters, called the Sand Snakes, the four youngest of which by his current paramour Ellaria Sand. Some rumors hold that he is bisexual.”

The entry cites Martin’s “A Storm of Swords” as the source material for this rumor. I found the relevant passage in Chapter 38.

“His tourneys, his battles, his duels, his horses, his carnality … it was said that he bedded men and women both, and had begotten bastard girls all over Dorne.”

Recently, in “Vanity Fair,” “Game of Thrones” creator David Benioff was asked to address the excess of female nudity on the program. He responded by saying that, after consulting his wife, actress Amanda Peet, he is mostly concerned with whether or not the show’s female characters advance the plot. “If they take their clothes off while they do it, then so be it,” he told the magazine.

Indeed, the amount of Westerosi breasts versus anything male on HBO’s hit series is hard to miss. Even some of the actors have commented on it. But flesh is only part of the issue. “Game of Thrones” is known for graphic depictions of sex of all kinds – heterosexual, homosexual, consensual, nonconsensual, incestuous, even supernatural. To be refreshed, one need only find the Huffington Post clip that excerpts every sexual scene from the series.

The more interesting question is inherent in Benioff’s phrasing: “If they take their clothes off while they do it, then so be it.” That doesn’t actually imply that the nudity or the sex adds to or furthers the plot at all. This calls to mind the scene in the first season in which Aiden Gillen’s character advises two of his prostitutes on how to properly entice clients. His lecture transitions into a rather long explanation of his particular lovelorn back-story – all while the two women continue to pleasure each other. (The episode led television critic Myles McNutt to coin the phrase “sexposition.”) Personally, I think the tactic worked only up until the point that it became very obvious that – despite the nudity – we were still listening to a poorly staged monologue.

Ultimately, "GoT" sex scenes and their narrative value are debatable on a case-by-case basis. In contrast to the aforementioned Little Finger episode, one can easily point to a later scene when horrific King Joffrey commands one whore to violently torture another. It’s a difficult scene to watch, but it speaks to the awful teenager’s emerging sadism as much as his acts of pure violence do. Moments between Cersei and her brother or Theon Greyjoy and his salt wife, for example, have fallen at different points along a salacious spectrum.

In the case of Oberyn, at first I questioned how his bisexuality – greatly extrapolated as it has been from the original text – would add to his upcoming story. The salient point, though, is perhaps not about his sexual orientation, but about the aggressive, irrepressible nature of his sexuality. We later learn that he has a voracious appetite for revenge as well, having come to King’s Landing to exact some form of rough justice. When in the first scene, he solicits a man who is not for sale and refuses to take no for answer, we can only assume that he will be as obstinate in all other affairs.