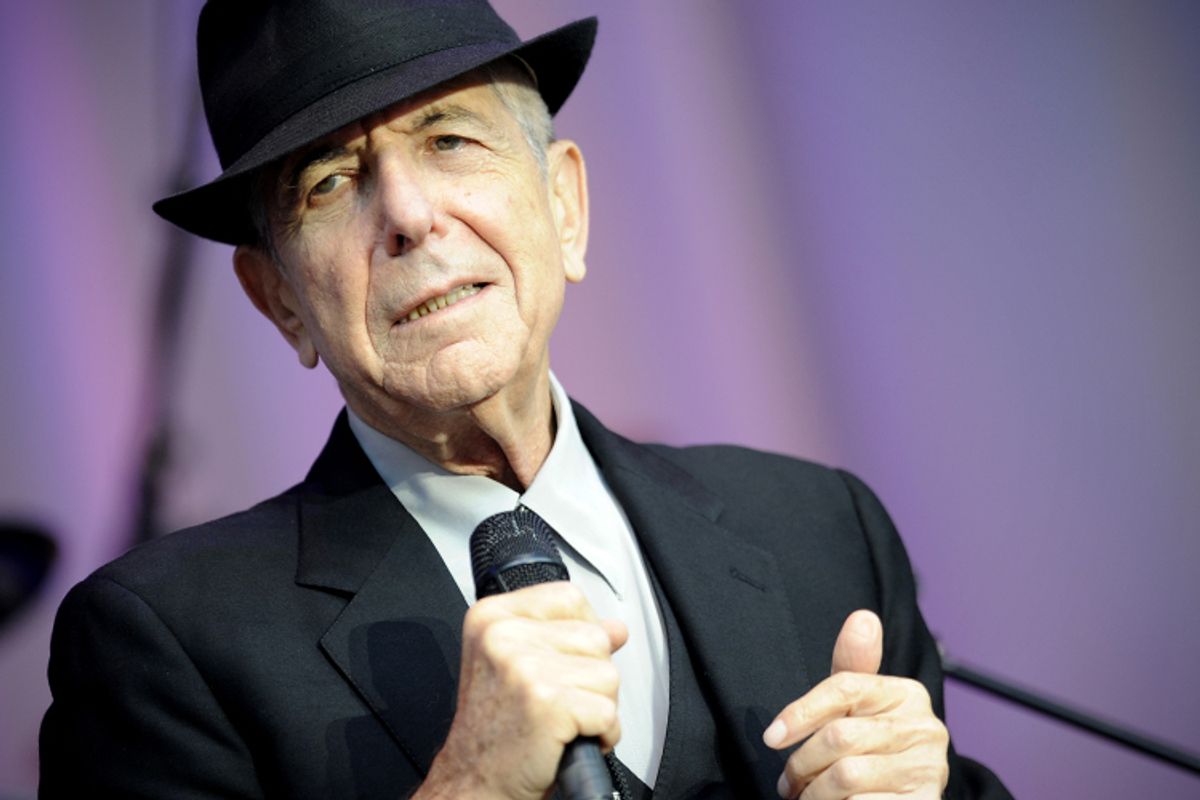 Adapted from "A Broken Hallelujah: Rock n Roll, Redemption and the Life of Leonard Cohen"

In the spring of 1970, the suits at Columbia Records, looking for a way to make some money off of the strangest artist in their stable, came up with a smashing idea: they would send Leonard Cohen on a European tour.

Stateside, the 36-year-old singer-songwriter wasn’t much of a chart-topper. His two albums have enjoyed modest success, and a few of his songs—“Suzanne,” say, or “Sisters of Mercy”—were covered by folk stalwarts like Judy Collins, but a decade older than the Hendrixes and the Morrisons and all of rock n’ roll’s younger and more alluring gods, Cohen was no one’s idea of a traditional rock star. On the Old Continent, however, his melancholy music and literary lyrics were celebrated; a European tour, went the record label’s logic, would help to widen Cohen’s fan base and give this poet-turned-singer just the career boost he needed. Cohen himself strongly disagreed. “The risks of humiliation,” he told an interviewer years later, “were too wide.” The label, however, insisted, and by May Cohen and his entourage were on the road.

Trouble brewed overnight. The tour’s second performance, a May 4 concert at the Musikhalle in Hamburg, was about to begin when news came of the shootings in Kent State University, which left four dead and nine wounded. Stage fright, Mandrax, and political violence proved a heady cocktail. Cohen took the stage, played a few songs, then goose-stepped and Sig Heiled. His outstretched arm drove the crowd mad. There was shouting. Some stormed the stage, which Cohen seemed to encourage. Someone thought someone had a gun. The police grew jittery. Peace was barely restored. Members of the band threatened to quit. None did, and Cohen’s entourage, feeling more like a military unit than a band of touring musicians, nicknamed itself The Army.

Cohen, its commander, was on the attack. Everywhere he went, he challenged the local police. At the Olympia, Paris’s celebrated concert hall, he urged the thousands in attendance to defy security and join him on stage. In Copenhagen he had them follow him back to his hotel. But if the local security guards were easy to overcome, the critics were less so. In London, Cohen sold out the Royal Albert Hall but failed to win over the press; his concerts, went the consensus, left “deep impressions of a sad and tortured wasteland.”

But if Cohen appeared uninterested in communicating with his listeners, his listeners sometimes seemed to return the favor. Everywhere he went, young men and women huddled together in what organizers billed as music festivals and expected something transcendent to happen. When it didn’t, when nothing but men and women with guitars took the stage and admission fees were charged and sanitation was failing, they often curdled. Rock stars arrived at gig after gig to find themselves booed for being mere performers and not legislators, gurus, or prophets. Sometimes, like the Rolling Stone concert at the free festival in Altamont, it ended in murder. Things were considerably calmer in Aix-en-Provence, but the same rancor was in the air: the naked people in the mud expected a revolution, and all they got was a lousy rock concert.

The Army realized the Aix festival would be trouble from the very drive up: the road leading to the bucolic field where the concert was to be held was blocked by dozens of cars, some having been abandoned by their owners, some occupied by irate and honking youth. It was the perfect visual representation of the festival’s contentious mood, an ongoing skirmish between the organizers and the audience. On one side were Jean-Pierre Rawson, a noted Paris music impresario, and Claude Clément, a French army general who was forced to resign his post because of his association with the Organisation de l'armée secrete, a paramilitary group that opposed France’s withdrawal from Algeria and tried to assassinate President Charles De Gaulle. His ultra-nationalist views aside, Clément was a patron of the arts and a member of the board of Aix-en-Provence’s celebrated opera festival, and he believed that the hippies’ love of music could, if cultivated, cure them of their boorish manners and their disdain for law and order. The local municipality was far from thrilled with the idea of throngs of young people, many of them still in the throes of the radical politics that had seized so many French students two years earlier, descending on the staid country town, but Clément had pull; he and Rawson, he promised, would produce a festival that would be to Woodstock what a fine baguette is to packaged sliced bread. The festival, its two producers announced, would be held on a 75-acre lot of privately owned land, and will feature three open-air stages, 22 bands and solo artists, 50 hostesses, 200 tents, a 20-line telephone center, and mobile surgical and maternity units. All these amenities were expected to serve 150,000 concert-goers, each paying the steep price of 55 francs per ticket.

Somewhere between seven and thirteen thousand people showed up. Clément’s involvement had turned many cold to the festival, especially when someone started a rumor that the general had hired harkis—native Algerians who had fought on the French side during that country’s war of independence—as security guards.  Those who did try to make it to the festival’s grounds were greeted by a massive police force that encircled the venue completely and made access a challenge and traffic unbearable. All this was too much for the young concert-goers to take. The festival, recalled rock critic Paul Alessandrini, felt like a “caricature of all that (and all those) which we refuse: recuperators who carry around with them the fetid odor of commerce, ‘officials’ who ‘understand the problems of youth.’” Even more vocal were a band of Maoists who had forced their way onto the grounds and demanded that the organizers forfeit the admissions charge and turn the festival into a free public event. Clément refused, and, every bit the general, he stormed the stage and gave a stern speech and said that the real youth had spoken and what the real youth wanted wasn’t politics but rock n’ roll. Whether this was the case remained unknown, as the only voices audible throughout the festival’s three-day run belonged to the Maoists who yelled and did their best to shame the performers into stating support for their revolution.

As these small battles raged on, Leonard Cohen and the Army stood staring at a knot of automobiles. They were still far from the festival’s site, and had heavy equipment with them. Walking was out of the question. A native of Hillsboro, Texas, the tour’s manager and keyboard player, the legendary producer Bob Johnston, suggested horses. Some were procured from a stable nearby, and the Army rode on, stopping only for a prolonged visit to a nearby bar. Now fortified by drink, Cohen decided to take the western motif as far as it would go and ride onto the stage atop the white stallion he’d been assigned. The horse, angular, its golden mane flowing down to its midsection, looked regal; Cohen, his eyes glassy and his hair unkempt, looked confused.

As soon as Cohen and his steed mounted the stage, the booing began. To the young leftists seething on the grass, the rich Canadian entertainer riding a white horse was a grotesque display of might and arrogance. Those steeped in Cohen’s biography shouted that he was a sympathizer of Greece’s fascist regime—why else would a foreigner maintain a home on the Greek island of Hydra?—while the rest just demanded that he say something about ticket prices and condemn the bourgeoisie. Drunk, and most likely stoned, Cohen addressed the crowd. “I’d like to say something about the link between the festival and money,” he said in his hesitant Quebecois French. “When the festivals will be yours, they will not belong to others. If you call me, I will already be there. But the thing is, there is not a revolution. When others talk about the revolution, it is their revolution. Leave the revolution to the owners of the revolution. They are like any other owners. They’re seeking profit.” He was incoherent, but the message got through regardless: talk of revolution was a sham, a fantasy that concealed the fact that earthly achievements required earthly labor and deserved earthly rewards, and that the people cultivating this fantasy were themselves, like everybody else, in it for fun and profit. Then he played “Bird on the Wire.” The catcalls went on.

The politics, the police, and the frenzy exhausted Cohen. When the whole world was going mad, where did you go for shelter?

“I want to play mental asylums,” Cohen told Bob Johnston. The producer was no stranger to such requests; just two years earlier, Johnny Cash had approached him with the task of arranging a gig at Folsom Prison. But Cash had intended for his prison concert to be recorded and released as an album. Cohen seemed drawn to asylums for entirely personal reasons. He never explained them to Johnston or to the other members of his band. Four years later, speaking to a reporter, he recalled his request and suggested that the “experience of a lot of people in mental hospitals would especially qualify them to be a receptive audience for my work.”

In a sense, he continued, “when someone consents to go into a mental hospital or is committed he has already acknowledged a tremendous defeat. To put it another way, he has already made a choice. And it was my feeling that the elements to this choice, and the elements of this choice, and the elements of this defeat, corresponded with certain elements that produced my songs, and that there would be an empathy between the people who had this experience and the experience as documented in my songs.”

On August 28, the Army drove up to the Henderson Hospital, just south of London; “it was all talking therapy,” a former nurse at the hospital told Cohen biographer Sylvie Simmons, “no medication, no ‘zombies.’” Cohen was led up to the institution’s imposing and narrow tower, where his impromptu performance would take place. “Oh boy,” he told Johnston as they made their way in, “I hope they like ‘So Long, Marianne.’” Most of those in attendance were young, and many were Leonard Cohen fans. The band quickly set up, and Cohen took his place at the front of the makeshift stage, underneath one of the “tall, narrow windows that gave the room the feel of a chapel.” He looked at the audience. “There was a fellow I spoke to last night,” he said, “a doctor. I told him I was coming out here. He said, ‘They are a tough bunch of young nuts.’” There was some applause, and Cohen started playing “Bird on the Wire.” But then he stopped. “I feel like talking,” he said. “Someone warned me downstairs that all you do here is talk. That’s psychotic, it’s contagious.”

During 80 minutes, he played only 11 songs. The rest of the time, he told the audience about his relationship with Marianne and how it had dissipated, about how “You Know Who I Am” was written after taking 300 acid trips and “One of Us Cannot Be Wrong” was composed while coming down from amphetamine, about the Chelsea Hotel and life in New York and making love and sharing lovers and feeling inconsolably sad. Each time he finished a song or a speech, the audience applauded rapturously.

And then it was time to leave. “I really wanted to say that this is the audience that we’ve been looking for,” Cohen said as the Army was packing up to go. “I’ve never felt so good playing before people.”

Adapted from "A Broken Hallelujah: Rock n Roll, Redemption and the Life of Leonard Cohen" by Liel Leibovitz. Published by W.W. Norton and Company. Copyright 2014 by Liel Leibowitz. All rights reserved.