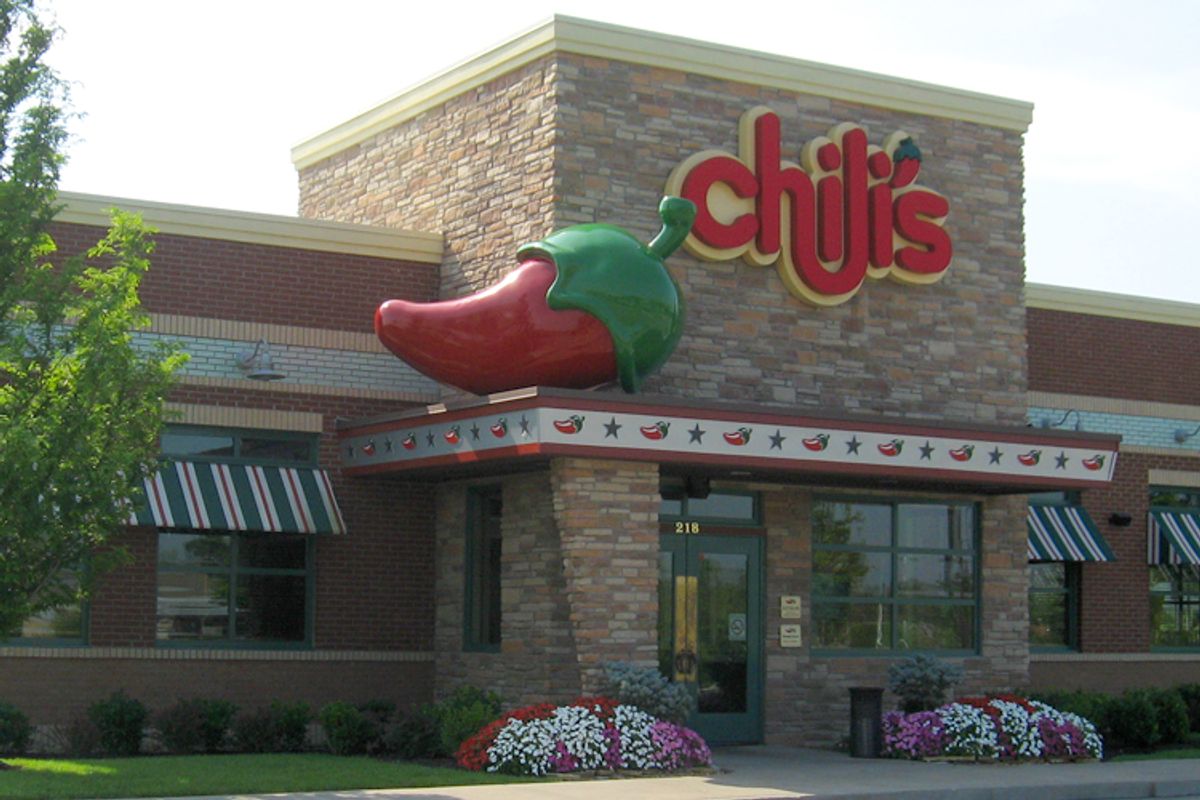 This is a story, like most stories involving Chili's, of something that sounded a lot better than it turned out to be. In this case, however, it wasn't an order of bacon-topped cheese fries but an unfortunate attempt at corporate charitableness gone awry. On Monday, the chain that promises that "more life happens here" abruptly canceled a scheduled Give Back Event in honor of Autism Awareness Month.

Chili's had originally promised to donate 10 percent of its customers' checks on Monday to the National Autism Association. It's an organization that offers information about what autism is, support resources for families living with autism and guidance and information on how to keep kids safe from wandering off – a danger that the death this winter of Avonte Oquendo made painfully real. Why then did Chili's suddenly pull the plug? Because – and apparently either nobody in the Chili's do-gooder complex had noticed or cared until it was pointed out -- the National Autism Association has dubious notions about the causes and treatments for autism.

As the organization explains on its own site, "While mainstream science discounts vaccinations as a cause, members of the National Autism Association feel vaccinations have triggered autism in a subset of children… Vaccinations can trigger or exacerbate autism in some, if not many, children, especially those who are genetically predisposed to immune, autoimmune or inflammatory conditions." It also lists "treatment options" including chelation/detoxification therapy, which the Mayo Clinic regards as not just "ineffective" but possibly "dangerous." For more information, it links to Prevent Autism, a site that calls "the current vaccination schedule as far too rough and dangerous for our children" and includes a video that declares that "Pharma controls the minds of those in the medical community… Pharma continues to play a role in the causation of the autism epidemic. Pharma is still causing autism to break out all over the world." So you can see how some people – maybe people who aren't down with measles outbreaks, for instance – wouldn't necessarily want 10 percent of their bacon ranch quesadilla and skillet chocolate chip cookie going to fund an organization that directs visitors to the National Vaccination Information Center, a site that includes a Cry for Vaccine Freedom Wall. In his book "Denialism," writer Michael Specter called the NVIC "the most powerful anti-vaccine organization in America." As Business Insider pointed out last year,  in the past several years, vaccine exemptions have led to an "upsurge in the rate of vaccine-preventable diseases, especially whooping cough." The CDC, meanwhile, remains firm that "There is no relationship between vaccines containing thimerosal and autism rates in children."

Just three days ago, Chili's had declared on Facebook that "The intent of our 4/7 National Give Back Event is not to express a view on this matter, but rather to support the families affected by autism. Our choice to partner with the National Autism Association was based on the percentage of donations that would go directly to providing financial assistance to families and supporting programs that aid the development and safety of children with autism." But by Monday morning, Chili's had changed its tune, announcing on its blog that "We are canceling Monday’s Give Back Event based on the feedback we heard from our guests" and promised "We will find another way to support this worthy effort in the future with again our sole intention being to help families affected by autism."

The move, like the original choice to team up with the National Autism Association, has been met with both praise and criticism from its Facebook fans. The Age of Autism site declared, "Chili's CAVED to media pressure and cancelled their support of NAA.... What a tragedy - from now on when a child wanders and dies you can Tweet and FB Chili's and remind them." But the National Autism Association itself issued a statement on Facebook stating, "We respect their decision and ask everyone to please speak words of love and kindness."

Meanwhile, if you'd like to spend your money in the cause of questionable science, you can still find a way. Just this winter Mojo Moxy and DSW teamed up with Jenny McCarthy, with a portion of the proceeds from the sale of a "spring style" boot going to McCarthy's Generation Rescue, an organization that famously suggests parents "educate before you vaccinate." Five years ago, McCarthy told Time, "I do believe sadly it's going to take some diseases coming back to realize that we need to change and develop vaccines that are safe." On Wednesday, she'll be appearing at New York City DSW in her expert role as a noted "shoe lover and Generation Rescue supporter." But it's a safe bet she probably won't be heading to Chili's afterward.