Coming out of the bisexual closet

For decades, I've called myself a lesbian. Is it finally safe to admit I like men, too? 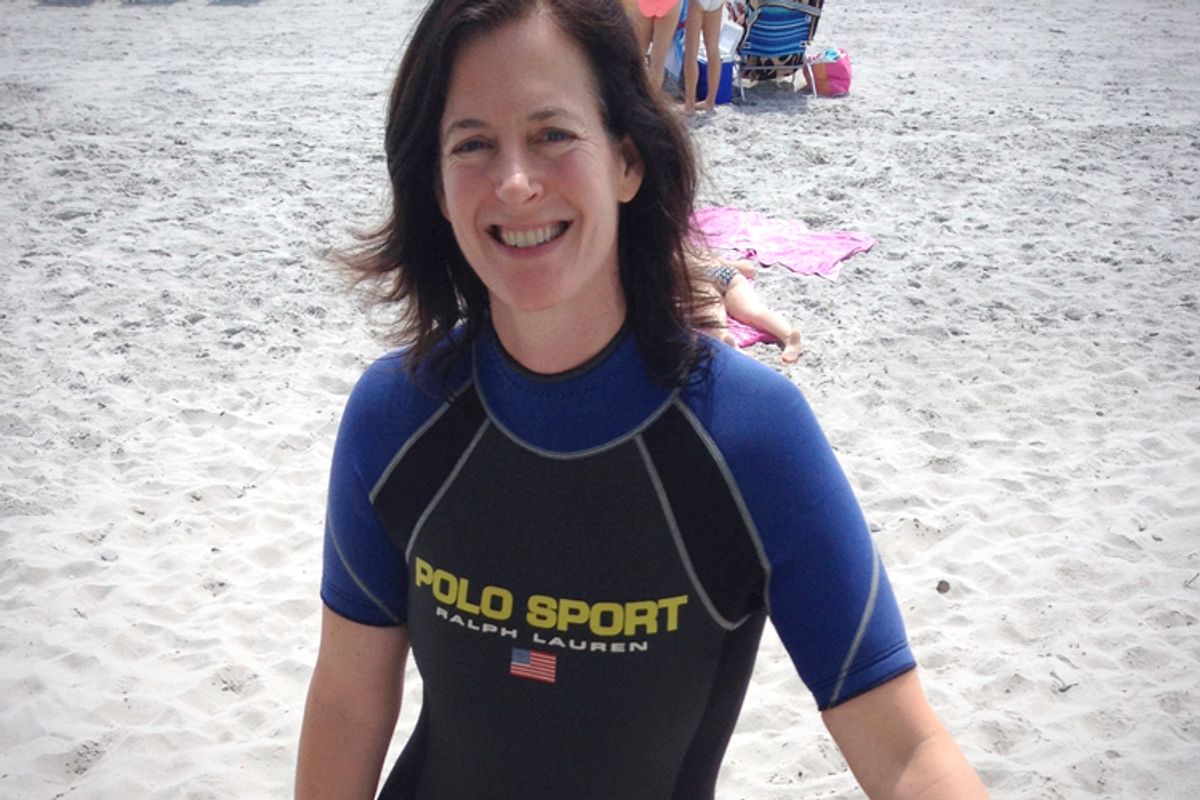 The candles were lit for dinner, and my date had arrived. I really liked this person, and I looked around a bit nervously, wondering what everyone was thinking. My suitor had come to court me by staying the weekend at my family’s summer cottage. I checked off the relatives at the table: My conservative Republican Southern mom. My 7-year-old son. My sister, her husband and their three kids. And, oh yeah, my ex-girlfriend and her kid.  To top it all off, my plus-one was a guy — the first I’d ever brought home. (I conceived my son solo, thanks to an anonymous donor.) It was Jane Austen meets "The L Word." I looked across the table at my brother-in-law and thought I saw an amused twinkle in his eye.

See, I’d been closeted for decades. But not about being gay — god, no. Twenty-some years ago, in the dark ages before lesbian chic, my poor mom had to deal with me writing about my lesbian life for the big lefty weekly in San Francisco. I was openly gay everywhere from the national media to the family dinner table. One unsuspecting right-wing pal of my mom’s was once seated next to me — at the very same table we sat around now — and spouted off about the “dykes” at a big feminist organization. I politely finished my bite of salad and turned to him: “I’m a dyke,” I said, sweetly, as my siblings became absorbed with their flatware and my mother no doubt wished she could slide under the table. I’ve brought long-term female partners home for the holidays. I was “domestically partnered” at San Francisco’s City Hall on Valentine’s Day in 1991, the first day it was an option. Basically, where being gay is concerned, I’ve got the ID card and the toaster oven.

So what was I doing bringing home someone with a scratchy face and an Adam’s apple? Well, all those years, I’d been keeping something quiet: I’m attracted to guys, too. I just didn’t want to flaunt it. I’d never denied my hetero tendencies — I even told my mom about them, way back in that college coming-out letter, though I have a feeling that’s not what she focused on. But when the need for a label came up, I chose “lesbian,” or more often, “gay,” since it seemed broader.

I’ve been head over high-tops with women; there’s no faking that for a cause. But adopting a label that didn’t quite fit me was definitely a political choice. No one wanted to discriminate against me for liking men.  And with people getting fired and denied many basic rights for having same-sex relationships, I felt the term “bisexual,” though accurate, just confused the issue. (The New York Times is, unbelievably, still questioning whether bisexuality even exists.) Refusing a label altogether? Tempting, but total political copout. The way I looked, people would just assume I was straight.

Besides, though I’d dated men over the years, my major relationships had been with women. When you’re in a long-term monogamous relationship with a female, your attraction to males is kind of irrelevant, like being married and attracted to co-workers you’ll never touch. Why mention it? So, aside from coming out as bi whenever lesbians started talking about how untrustworthy or confused bisexuals are, I held fast to the gay label.

Yet once homosexuality had changed from “the love that dare not speak its name” to “the love that’s declared equal by the Supreme Court,” concealing my straight side for political reasons started to seem outdated, and the lesbian label’s inaccuracy had long since started to chafe. It was high time for me to come out of my other closet.

As is the case with many coming-outs, I was pushed.  I’d met this guy through a friend, down South, where I grew up. I wasn’t looking for love and he didn’t fit my usual dark-and-handsome bad-boy taste in men. He was wiry, blue-eyed, fair-skinned, a bit goofy and … nice. Still, the attraction was instantaneous. Our first and second dates were in Virginia. But if we were to have a third date, it would have to be at Mom’s summer house in Maine, where, due to an unusual series of events (including our Brooklyn apartment building catching fire), my son and I were temporarily stationed for the season. And because of my new squeeze’s custody schedule with his ex, his visit would fall on the weekend my whole family would be celebrating my sister’s birthday — coincidentally the same weekend an ex of mine would be passing through, on her way to taking her son to a summer camp further north. Mom, son, sister, brother-in-law, nieces, nephew, lesbian ex and her kid: What more could a guy want from a gal on a third date?

I warned him it was not the ideal weekend, but he was game. Then I nervously called my ex to tell her about this new love affair and see if she felt comfortable sharing the house with us. I told her I understood if she didn’t, and that she had first dibs on the weekend. I’d promised her a place to stay and we’d been friends for three years. Mr. Three Weeks could wait. But she said it was fine.

Then there was the question of my family. My friends knew I sometimes dated guys, but I’d always kept my mouth shut about it with my relatives. I didn’t want to deal with the joy and relief I thought I’d hear in their voices: “Phew, it was just a phase!” If a relationship with a guy had gotten really serious, I would have certainly introduced him to everyone. But for whatever reason, the men never lasted that long.

A lot has happened in the decades since I came out, though. Mom went from being horrified by (but accepting of) my sexual orientation, to enjoying the lesbian subplot on “Friends,” to watching her hairdresser be denied hospital visitation rights when his longtime male partner was dying, to lobbying her Episcopal bishop for gay marriage.

As goes Mom, so goes the nation: Though there’s still plenty of anti-LGBT discrimination (hello, Arizona!), the broad political and cultural status of homosexuality has changed dramatically. Even George and Barbara Bush attended a gay wedding! At this point, exactly what was I trying to accomplish by clinging to the lesbian label? Besides, I’d been a grown woman for decades. It seemed ridiculous to be nervous about bringing home a b-o-y.

In the end, I didn’t actually have to spell it out. What with the guy flying to Maine to visit me just a few weeks after meeting me in Virginia, no one misunderstood the nature of the relationship. “He must really like you,” my mom said, a bit wide-eyed.

So there we were, all 11 of us, at the dinner table on Saturday night. It was the most public date I’d ever had in my life. No one went on a rant against straight people, of course. This time I could just enjoy my salad instead of making pronouncements about my sexual orientation. I did wonder what everyone thought of my beau and what he thought of them. (“I can see what you saw in your ex. She’s great!” he said at one point, which was both nice and totally weird.)  And I fretted a bit about what the guy thought of my kid and even my dog. But mostly I just went with it.  And it was drama-free — everyone was relaxed and entertaining and got along. I expected to feel embarrassed or awkward, but I didn’t.

Part of it was probably that, as a middle-aged soccer mom, I’m too old and too busy to be self-conscious. But the other part was that my family may have truly outgrown its homophobia — they don’t really care anymore whether my partner is male or female, so long as the person treats me well and I’m happy. And the decades have worn the chip off my own shoulder. I don’t have much I feel I have to prove, orientation-wise or otherwise.

Which turned out to be a good thing: My date was literally a former boy scout from my conservative hometown. I’m not a classic rebel, but that’s the last sort of person I ever expected to go out with. Plus, he had retro Southern manners that included ordering for me at a restaurant when we went out the next night. Ordering for me! Without asking what I wanted! Twenty-year-old me would have had a feminist conniption, canceling his scotch and ordering him a strawberry daiquiri, just to make a point. Only 10 years earlier, I’d protested when a butch girlfriend didn’t want to let me open doors for myself — I wasn’t about to be shoved into some helpless/pedestal role by anyone. This time, however, I raised an eyebrow but couldn’t even summon up a comment. Fifty-year-old single-mom me was just happy to have someone take over for once.

The thing was, I just really liked him. The attraction had been unexpected and the more we hung out, the stronger it felt. Wouldn’t it be funny if, having spent 30 years identifying mostly as a lesbian, I ended up with the boy next door? With this guy — kind, smart, funny, progressive, with that youthful, playful spirit I’m always a sucker for — I could picture it.

The weekend in Maine turned out to be great fun, despite the overabundance of chaperones. I’d tried sneaking into his room one night, which was right across from my mom’s and my ex’s, but my dog, crated downstairs, sensed foul play and started barking like a furious husband. Still, we laughed, we dined, we boogie-boarded — and even managed to steal a few moments of romance. Then he got back on a plane to Virginia.

Sadly, that was the last I saw of the Southern gentleman. There was talk of a repeat visit, then silence, then an awkward phone conversation. Turned out he was Just Not That Into Me. Or maybe the extended family, the kid, the dog, the lesbian exes or the distance scared him off. So many possible date-repellents to choose from. I was crushed. He’d felt like a keeper.

Once I’d moped around a bit, though, I started to think that as failed relationship attempts go, it had been kind of wonderful. I wasn’t any closer to the life partnership I wanted — and had once thought I’d had, after eight years “domestically partnered” with a woman. (Hey, at least the fact that she and I weren’t allowed to marry meant that we didn’t have to divorce.) But I realized that things had gotten to the point where, maybe, instead of protecting one side of myself at the expense of the other, I could start to be … me. Straight, gay, bi, whatever.  Now I just have to figure out how to fit all that into my online profile.

Louise Sloan is a longtime editor and writer (Ms., Glamour, Out, Ladies' Home Journal, New York Times) and the author of "Knock Yourself Up," a memoir/report on the trend of choosing single motherhood. She is currently working on the launch of Singlewith.com, an online magazine and community for single parents.