GOP's woman-haters club swells: Why their hatred is actually getting worse

From Christie to Limbaugh the right's view of women is steeped in the 18th century. It may finally catch up to them 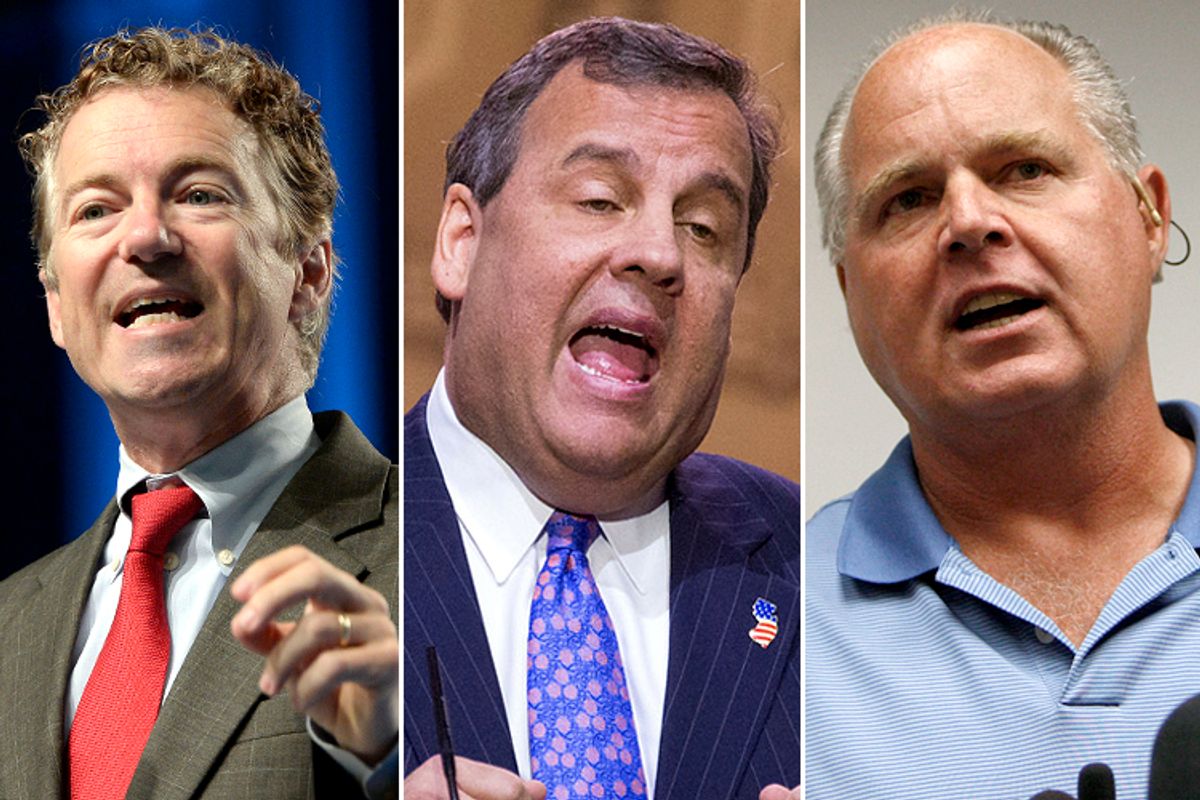 In the recently released report he commissioned on the bridge closing scandal, New Jersey Gov. Chris Christie's lawyer depicts the client as the innocent who was ensnared in the web woven by an "emotional" woman. No longer is Bridget Anne Kelly his hardworking deputy chief of staff, doing the bidding of a canny, no-nonsense governor; instead, she is your run-of-the-mill hysterical female lashing out against the multitude of commuters to get revenge, somehow, for being dumped by a guy.

Does this scenario make any sense? Why is it so common to subject to psychoanalysis a public official who is a woman? Why must she be cast as the dangerously “emotional” one in a political drama that paints Christie as a properly sensitive, duly caring public servant with “heartfelt” concern for his staff? Kelly’s attorney reacted to the obvious gender bias: “The report’s venomous, gratuitous, and inappropriate sexist remarks concerning Ms. Kelly have no place in what is alleged to be a professional and independent report.”

The Christie report’s sexist motif cannot be treated in isolation. The evidence suggests a deep-seated hatred that calls to mind the hatred directed at President Obama for his oft-imagined illegitimacy. Just like the knee-jerk “You lie!” and “subhuman mongrel” that Obama unfortunately has to hear, sexist remarks from thought-deprived men are more than an eye-rolling distraction. “Barefoot, pregnant, and in the kitchen” is not a dead ideology; insidious remarks about women’s “natural” helplessness are automatic in certain circles. They keep popping up like an annoying Whack-a-Mole. Can we figure out what’s going on?

The month just past was a heckuva month for know-nothingness and woman-bashing. In mid-March, responding to news of a projected National Women’s History museum, the always instructive Rush Limbaugh auto-blurted: “We already have, ladies and gentlemen, I don’t know how many museums for women all over the country. They are called malls.” Pregnant pause. “Hey, I could have said brothel.” Yes, and you could have admitted that in your oafish imagination a woman who is not deferential is a militant.

The marginally less rude but equally humorless Sen. Rand Paul grabbed momentary headlines when he tried to smear Hillary Clinton by associating her with the decades-old taint of her husband's infidelity. Meanwhile, in defense of his own political virtue, Paul added a personal reflection to his stock of convenient statistics. “I've seen the women in my family and how well they're doing,” he explained. “My niece is in Cornell Vet School, and 85 percent of the people in vet school right now are women. Over half the young people in medical school and dental school are women. Law school, the same way. I think women are doing very well, and I’m proud of how well we’ve come and how far we’ve come, and I think that some of the victimology and all this other stuff is trumped up.” Nothing to worry about, ye women seeking an equal place in society. He’s got anecdotal evidence. So stop complaining.

On March 20, apocalyptic visions with political resonance came from the lips of the author, onetime Limbaugh research assistant and born-again Christian Joel Rosenberg, a guest on the “700 Club.” He assured sympathetic host Pat Robertson that God will punish America when it reaches 60 million abortions – which, he hastened to compare, would mean six times the number of Jews murdered by the Nazis. He also likened those Christians who refuse to actively oppose abortion to the German Protestants who collaborated with Hitler’s Bible-burning regime.

Then, on March 28, radio talk show host Bryan Fischer, the director of “Issues Analysis” for the American Family Association, said he only hires women as secretaries because of “God’s basic design,” which necessitates gender discrimination; a woman’s “primary outlet” was at home. The same sentiment was expressed by New Mexico Republican Steve Pearce in his new book: “The wife is to voluntarily submit, just as the husband is to lovingly lead and sacrifice.” By his logic, her submission to him is equally rooted in submission before God and love for a husband. Pearce, a Baptist, places on the man the biblically inspired requirement that he “take the leadership role” in all principal issues, “and be accountable for the outcome.”

And who can forget Mike Huckabee’s precious, upside-down defense of womanhood earlier this year: “Women I know are outraged that Democrats think that women are nothing more than helpless and hopeless creatures whose only goal in life is to have a government provide for them birth control medication … If the Democrats want to insult the women of America by making them believe that they are helpless without Uncle Sugar coming in and providing for them a prescription each month for birth control because they cannot control their libido or their reproductive system without the help of the government, then so be it.” You tell ’em, Mike.

Time for a history reminder. Some appear to have forgotten that the reason women did not gain the right to vote until 1920 was because male politicians felt a female franchise threatened the institution of marriage. Under the common law definition of marriage, women were defined as subordinate and dependent on their husbands; in no uncertain terms, their identity was subsumed into their husband’s.

Case in point: adultery. It caused husbands to divorce their wives, but not the other way around. The fear was that the wife might give birth to another man’s child and corrupt the husband’s ability to reward his legitimate heirs. Another example: immigration. From 1855 to 1922, a woman who bore a child outside the U.S. was unable to confer citizenship upon the child; only an American man could do so. In the early 20th century (1907-1922), a women could be divested of citizenship if she married a non-American. Meanwhile, it was acceptable to grant citizenship to a foreign woman who married an American male. Can you say, “double-standard”?

In the 1873 Supreme Court decision of Bradwell v. Illinois, the court ruled that a woman could not practice law because she could not represent her client. Myra Bradwell was married; her first allegiance was to her husband. She could not represent herself, let alone a client. This immutable fact was based, reasoned Justice Joseph Bradley, on the “law of the Creator” and common-law dicta from “time immemorial.” Women’s bodies undermined their authority, Bradley contended. They lacked the “confidence,” “decision,” and “firmness” of the “sterner sex.” Yes, the women of 1873 were viewed the same way Christie’s report painted Bridget Kelly. That’s the cultural and judicial tradition from which the nonsense we hear spouted today arises.

Men were men. The standard. That’s why it was always “mankind” and “All men are created equal.” Women were referred to – and this is not a joke – as “the sex,” because everything they did was viewed through a sexual lens. Eve was the gateway to evil. Without ministers, husbands and, now, Republican politicians to supervise their behavior, they invariably fall prey to uncontrollable libidos. As it was in the 18th and 19th centuries for mainstream America, it remains in select circles in the 21st.

Now then, when was the last time you read of a female gang member who shot up a neighborhood; or a young, disturbed female who went on a rampage in an elementary school, a mall, a military base; or a congresswoman who slept with an intern, a male prostitute or a campaign aide’s husband?

Women in politics do not tend to be the philanderers, adulterers, harassers, or johns. And they certainly appear the more trustworthy gender when it comes to responsible gun ownership. If Americans really prioritized sexual purity or rational behavior, they would have to assume that a vote for a woman was less likely to be regretted; and that a female politician was at least slightly less likely to be compromised in today’s court-sanctioned corporate-owned electoral money game that puts the lie to our insistent definition of the United States as a representative democracy. Note that more women than men graduate college these days. Note that more women vote Democratic, and more men vote Republican.

The real question is: Why aren’t Republican men suffering more at the polls for their bad behavior? Why, as we approach the midterm elections, is it so hard for prospective voters to acknowledge what stares them in the face? In their crippled efforts to redefine in less obnoxious language its ever-active legislative war on women, the Republican Party employs diversionary tactics to hide sad truths about a morally bankrupt gender bias.

We’re not making news, or offering a rare insight, when we denote today’s far right as a loud, angry, fear-mongering, control-oriented faction that accuses government of meddling in people’s lives when it is they who really want to enforce submission. The economic arm of conservatism protects moneyed power, while the socio-religious arm does its best to enforce patriarchy. And yet these same people never tire of tossing out the word “liberty” in their opposition to a supposedly meddlesome federal government. Apparently, to them, liberty means “you can’t take away what I hoard or what I command.” Indeed, they are the party of hoarding and commanding, keeping some people down and pushing other people around. They (more than their typical targets: IRS, Affordable Care Act, etc.) are the meddlesome ones. Why is equal pay for women – or fairness of any kind in the workplace – still at issue?

Before the weaponless, holier-than-thou Rand Paul attaches Hillary Clinton to husband Bill’s Lewinsky affair, the Kentucky senator ought to have a word with Newt Gingrich, who cheated on his second wife because he loved America so much. And he should ask Oklahoma Sen. Tom Coburn why he covered up Nevada Sen. John Ensign’s sordid, payoff-laced affair with his campaign director’s wife, when Ensign used their ultra-Christian bachelor pad in D.C. to stage his trysts. There are enough Republican libertines to go around – and generally speaking, they are the same men who attack women for using birth control.