A couple comes under fire for setting sail with young children, but parenting is always a life or death risk 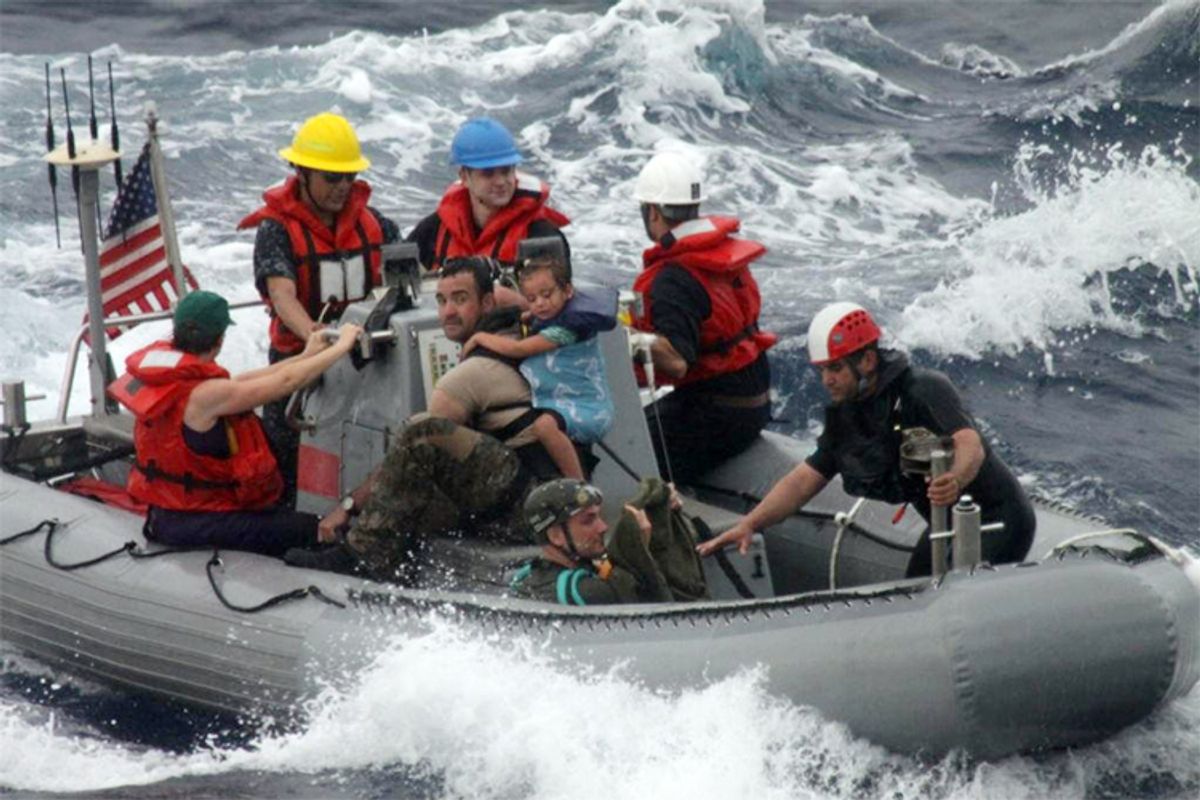 Eric and Charlotte Kaufman aren't like other parents. Last month, the couple – along with their daughters, 3-year-old Cora and 1-year-old Lyra – set out from Mexico "across the world's largest ocean" on a sailing journey they hoped would lead them and their 36-foot sailboat, the Rebel Heart, into the South Pacific islands and eventually into New Zealand. They left with "this kick-ass dream of ours" and the promise to share it on not one but two blogs – his and hers. Instead, on Thursday, a mere two weeks into their adventure, the family found itself in the midst of a dramatic Navy and California Air National Guard’s 129th Rescue Wing rescue after their boat "lost its steering and communication abilities" and baby Lyra became violently ill. They were picked up 900 miles off the coast of Mexico and are now all recovering. Their boat was sunk in the recovery effort.

In a statement over the weekend, the family stood by its decisions, announcing that "We are proud of our choices and our preparation, and while we are disappointed that we lost our sailboat and our home, we remain grateful for those who came to our aid and those family and friends who continue to encourage and support us." But as news of the family's rescue – and the unique circumstances that led to their distress – made headlines around the world, it didn't take long for sharp lines to be drawn about the Kaufmans' parenting choices. Though the couple has spent years sailing and considerable time and effort preparing for the journey with their children – including shorter expeditions -- Charlotte's own brother James Moriset had a clear perspective. He told reporters this weekend that "I don’t understand what they were thinking to begin with. I’m sorry, I don’t even like to take my kids in a car ride that would be too dangerous, and it’s like taking them out into the big ocean? It’s like – I don’t know … I saw this coming. I saw the potential for every bit of it."  And in the New York Times Monday, experienced solo sailor Matt Rutherford declared, "I have a rule in my mind that I would never bring a kid less than 2 years old." On Facebook, the family's Rebel Heart page has been a ferocious debate between commenters who call the couple "idiots" and "just can't believe how selfish those parents are dragging those kids out to the wild ocean on a small boat" and others who commend them as "smart, hardworking and good parents who love your girls."

If you judge them strictly by their online presence – and unless you're a friend of the family there's really no other way to do it -- the Kaufmans seem a very specific type of family unit, one practically invented to evoke strong and polarizing sentiments. With their tattoos and their Etsy shop and their exhaustive body of blog posts and photos, they seem actively cultivating their parenting as a public act. Their particular brand of parenting – a type that doesn't involve minivans and peewee soccer leagues – isn't for everyone. And because of their documentation of their experience, it's easy for any outsider to go back and second-guess their choices. Before taking off on their trip, Charlotte candidly wrote, "Lyra tested positive for the same strand of salmonella I had, and Cora, although negative for the salmonella, tested positive for something called Proteus? I don't know. It was stressful to say the least. Cora had to go back and get tested for dengue because of the symptoms she was exhibiting." Had they made it successfully to New Zealand, it would have just been another blog post. Instead, now it bears an ominous weight.

But the dirty secret of parenting, whether you do it on a boat or in the projects or in a minimansion on a cul de sac, is that it's always fraught with second-guessing. As one of the Kaufman's defenders asked on Facebook, "Have you ever put your child in a moving vehicle? You have put your child in harm's way. Let your child participate in organized sports? More children were killed playing organized sports in the US than were injured sailing." In a story on "The Overprotected Kid" just last month in the Atlantic, writer Hanna Rosin admitted, "When my daughter was about 10, my husband suddenly realized that in her whole life, she had probably not spent more than 10 minutes unsupervised by an adult. Not 10 minutes in 10 years." And she noted that while modern children are considerably more supervised and less autonomous than they were in generations past, "The final irony is that our close attention to safety has not in fact made a tremendous difference in the number of accidents children have."

Not many of us would try to sail off with two very young children for uncharted waters. And yet, I have watched a father walk along the edge of an Irish cliff with a 3-year-old. I know parents who've taken small children out hunting with them. I know parents who leave their elementary-school-age children alone in the house while they run errands. My own daughters have peered over the edge of Horseshoe Canyon and ridden on the New York City subway as brawls have broken out. They've been cooking since they were toddlers, happily surrounded by sharp objects and fire. And I can't think of too many emergency room stories involving a child – mine or someone else's – that didn't involve a seemingly minor action that happened within arm's reach of the kid at the time.

Whether we deck them in bubble wrap and helmets or set them out in the Pacific Ocean, the fact remains that human life is unbearably fragile. We as parents are charged with protecting our children and that means living in a near constant state of risk assessment. Is that toy a choking hazard? Is that car seat too loose? Are they ready to walk to school alone? It means living with the fear that they'll get hurt, but understanding that danger is part of life.

I know how remarkably easy it is to judge other parents for their choices and dress up that judgment in the guise of concern for the children. The truth is that most of us are just doing the best we can with the skills we have. I wouldn't make the same choices the Kaufmans have. Forget the sailing; I wouldn't even do the blogging. But that's because I'm a different parent living in a different family. Yet even though our lives couldn't be less alike, I know that few of us ever get out of raising our children without needing sometimes to be rescued.