I loved naked yoga: Maybe I am a naked person!

Before I tried naked yoga, I thought it might be hipster nonsense. Instead it made nudity liberating and, yes, sexy 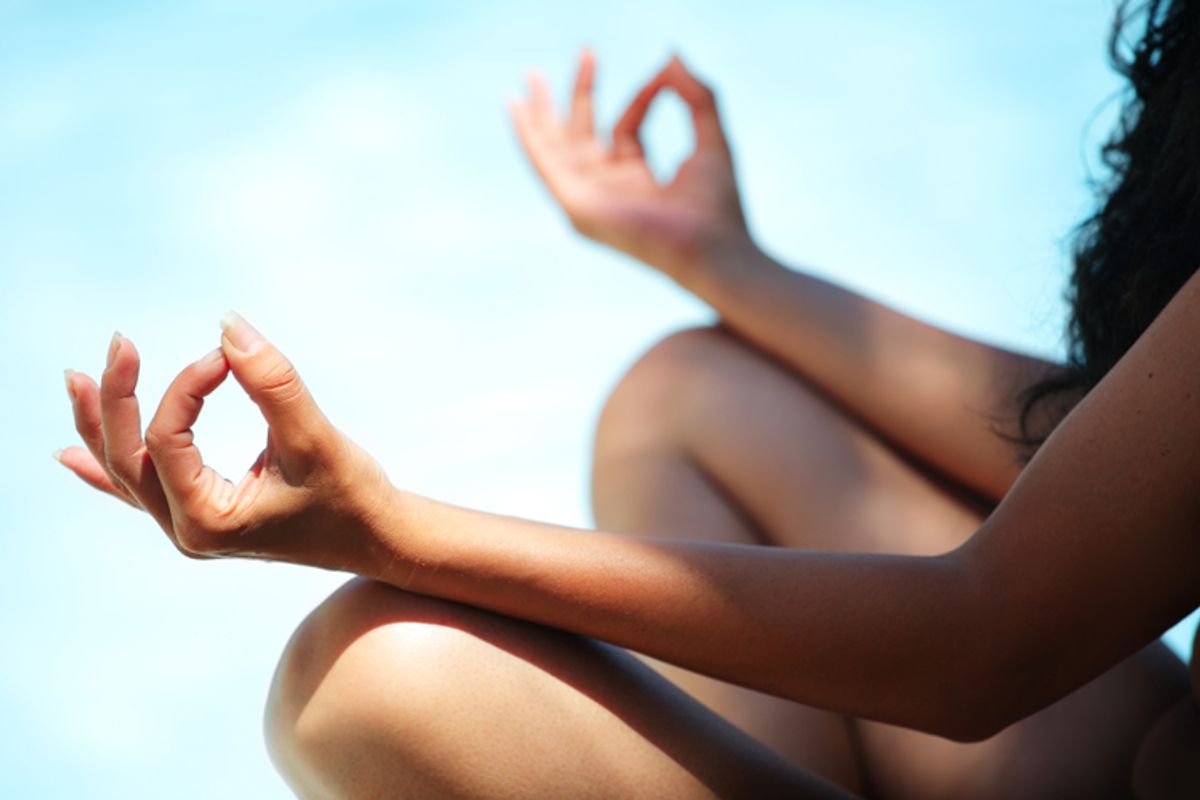 I am not a naked person. By “naked person,” I’m talking about the Italian friend you had in elementary school whose dad used to answer the door without underwear on. Or the Marxist freegan you dated sophomore year of college who referred to things like pillows as “societal constructs.” Or the life coach/bartender/video artist your brother dated, who called herself Nectar and had an Egon Schiele portrait on her back, even though she didn’t know how to spell “Egon Schiele.” I’m talking about people who, for whatever reason, regardless of the time or place or circumstances, are always totally down to drop trou and party.

I am not one of these people, and I never have been. I did not grow up in a naked house, I didn’t have naked parents, and I’ve always felt somewhat squeamish about the human body in its natural form. To paraphrase a line from a "Seinfeld" episode, when people say they’re not ashamed of their bodies, I always think, regardless of what they look like, “That’s your problem. Maybe you should be.”

So when I heard about Bold and Naked, a yoga studio in New York’s Chelsea where people practice “naked yoga,” I had two thoughts. The first was: “OMG that sounds horrifying. Don’t people know that downward dog is the leading cause of fart induction in the United States? Why would anyone subject themselves to this? I’m surprised the propulsion of people’s naked farts hasn’t caused the building to detach itself from its foundation and float away into the abyss, never to be seen or heard from again.” And my second thought was: “OMG I totally have to do this.”

Now, I don’t accept or love myself, at my core or otherwise. But I do know myself pretty well, and I figured that despite its message of empowerment and self-love, I’d probably dismiss Bold and Naked as crunchy granola hipster nonsense, an excuse for 60-something retirees with ponytails to come get an eyeful of a 20-something ladies' 32C chakras. Yet despite my reservations, I signed up.

I showed up to a Thursday evening naked yoga women’s class (as a Bold and Naked first-timer, I was warned against signing up for the coed class, which is more rigorous than the single-sex classes; as a yoga beginner with the flexibility of an antique oak armoire, I was more than happy to err on the side of caution). With its vaulted ceilings, wooden floors and lavender-and-black walls, the Bold and Naked studio was upscale and inviting; it looked a bit more like a hair salon or a high-end boudoir than a yoga studio.

There were only two other people in my class: Bold and Naked Studio co-owner Monika Werner, a tall and curvaceous German woman with cropped red hair, and "Elizabeth" (name changed), a pale, oval-faced woman in her early 30s who worked in higher ed. Monika explained that due to the amount of press coverage Bold and Naked had received in the past few weeks, they’d had to change the schedule around, which had resulted in this class being unusually small.

After Monika and B&N co-owner Joschi Schwarz made me sign a waiver and grilled me on my yoga experience — I thought they’d be impressed when I told them I did the P90X yoga DVD a few times a week, but they just seemed bemused — Monika led Elizabeth and me upstairs to another studio. Before we took our clothes off, we chatted for a bit, and she asked us why we had decided to take the course.

“I’m a very shy person and I figured doing something like this would help me get rid of my inhibitions and feel more comfortable in my own body,” Elizabeth said.

After a few minutes of chitchat and taking inventory of our energy levels, Monika asked us to disrobe. There were two full-length mirrors directly beside both Elizabeth and myself.

As we took our clothes off, I tried to avoid falling into the girls’ locker room trap of sizing myself up against the other women’s bodies: After all, this was supposed to be a liberating and empowering personal experience, and part of that means not comparing yourself or your body to other women.

“How does it feel to be naked right now?” Monika asked, sitting cross-legged.

“It’s kinda like being on a first date with someone,” Elizabeth said. “I have butterflies in my stomach and my heart is beating a little fast. But overall it feels OK.”

As we started warming up, I instantly started cursing myself for having eaten a giant Cambodian pulled pork sandwich a few hours earlier, and for not having waxed or trimmed beforehand. In the full-length mirrors, Elizabeth and Monika looked like the sculptures of Greek goddesses at the Met; it was as if they’d waltzed off their pedestals, taken the F train downtown and twisted their ivory bodies into chair pose. Next to them, I felt like I looked like a sketch of the female anatomy from a 1970s feminist consciousness-raising manual, all slack breasts and dimpled thighs and Jewfro pubic hair.

While the class was a lot faster than my P90X DVD, most of what we did were pretty standard yoga poses. Monika was an incredible instructor, serene without being condescending or devolving into hippy-dippy cliché, only occasionally gently correcting our form in her soft German accent. In my experience, yoga instructors tend to look at my rigid, completely unmalleable body trying to contort itself with pity and condescension, like a liquor store clerk watching a 13-year-old using her cousin’s fake ID to buy beer. I never felt that way with Monika. I never felt at any time that she was judging us or our bodies, or being anything less than nurturing and supportive.

As for the naked part, Monika said that in a few minutes, we’d basically forget that our clothes were off: “Someone once told me that the naked part is easy. It’s the yoga part that’s hard,” she said midway through class. While this was true to a certain extent, I never once forgot that I and my fellow yogis were naked. But being naked made me more conscious of my body and what it was going through, which in turn enhanced the experience. Although I was sweating and tumbling and stumbling as I usually do during exercise, I didn’t feel like I had any constraints or excuses — clothes, hair, jewelry, a low thermostat, a ringing cellphone, a hungry dog or cat — to distract me.

I had never felt like being naked was anything other than a source of anxiety for me, but with my leg twisted behind my back, my arm up in the air, and my erogenous zones exposed for God and Monika and Elizabeth to see, I felt, for the first time, like being naked could be truly relaxing, even liberating, even spiritual, even sensual, in an earth mother, “I am Womyn, hear me roar” kind of way. It didn’t matter that I was sweaty and inflexible and looked like an Eastern bloc ‘70s porn star next to two anthropomorphized Polykleitus sculptures; I felt cool and confident and, weirdly, sexy. I have a friend who’s insisted for years that one of her greatest fantasies is to have sex with herself. Seeing myself launch into warrior pose in the full-length mirror at Bold and Naked, looking proud, strong and very, very naked, is probably the closest I’ll come to understanding that impulse.

After the class, when we were all well-rested and refreshed and clothed (after an hour of being naked, I actually felt weirder with my clothes on than I did with them off), Monika told us that this was a fairly common response to doing naked yoga. She described being interviewed by a reporter last week while she was naked, and the woman asking her a fairly intimate question. “I answered honestly, and she said, ‘Somehow, I believe you, because you are naked,’” she said. “When you’re naked, you can’t hide behind anything. It’s all out in the open. It’s totally honest. You can just be yourself.”

By the time I left Bold & Naked, I didn’t quite feel like I accepted and loved myself any more than I did when I came in, as the website had promised. But I did feel, somehow, like I knew myself better, or at least had discovered a part of me that I’d never known I had. What I’d learned is that deep down inside, I was a naked person. I’d always been a naked person. And while I’ll probably never call myself Nectar or get a German expressionist back tattoo or answer the door without pants on, I do know I’ll be joining Monika for another Bold & Naked class next week.