Republicans' big-money puppet show: Why the 1 Percent will always pull the strings 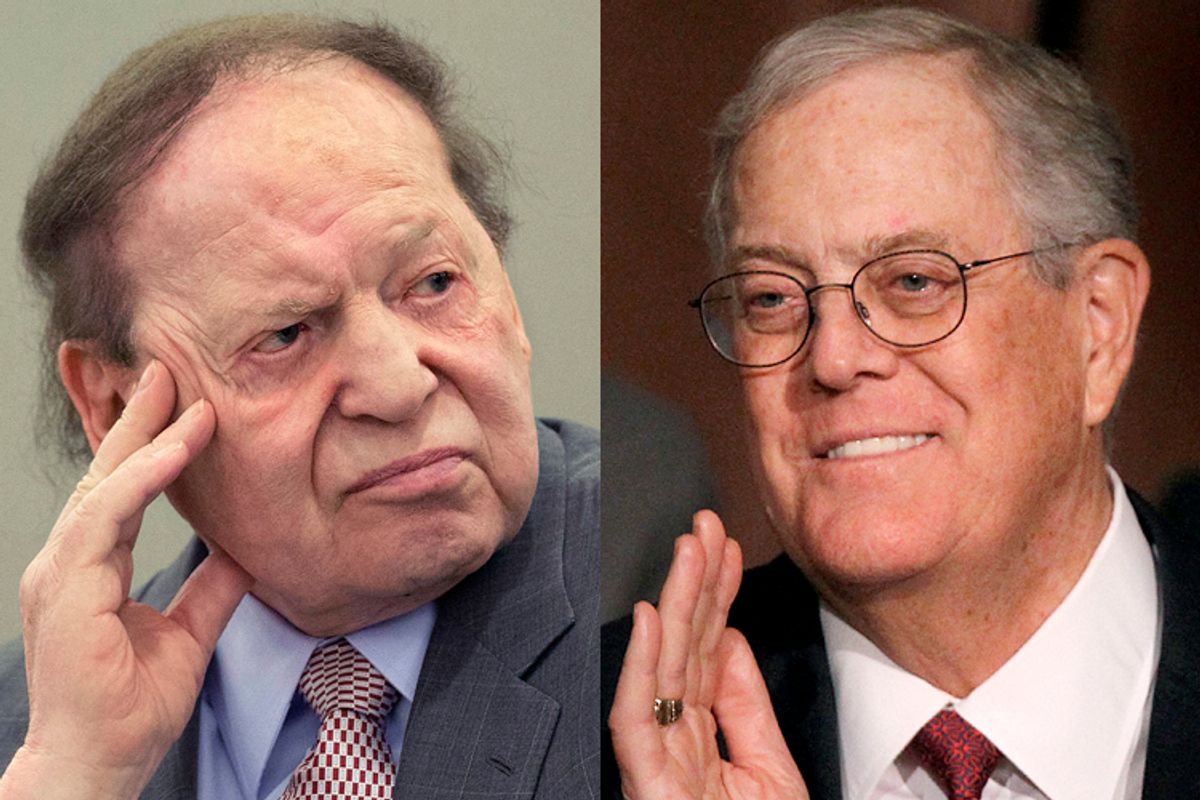 The Supreme Court decision in McCutcheon v. FEC, which uncorks another gusher of big money into the political system,  brought forth a lot of justifiable angst among progressives for obvious reasons. There may be progressive billionaires out there who are willing to sign big checks, but it's the right-wing billionaires who are making a profit at it. A MAD-money arms race is highly unlikely to benefit people who are concerned with income inequality, poverty and economic justice.

Reportedly, both parties took to the phones in the immediate aftermath and started calling up their deep pocket supporters. And even though the Supreme Court has launched what many people acknowledge is a money "arms race," some in the media inevitably called the Democrats hypocrites for doing it -- but I don't think you can really blame them for failing to lay down their weapons as a matter of principle. (It would be a fascinating experiment if they did, though ...) McCutcheon seems designed to make the parties more powerful again by allowing big donors to simply hand over big checks and let "the professionals" do what they do.

On the surface, this may sound like a good thing. After all, the big super PACs and the Dark Money that's come to dominate our politics in the past few years has very little transparency (which is why these Big Money Boyz like it so much.) One could make a case that the the parties, at least, are subject to some accountability to the public. Election expert Rick Hazen thought that one of the unanticipated results of this decision might be a loosening of the gridlock that has completely seized up the machinery of government during the Obama era:

Strong political parties have more incentive to cooperate than oppose each other under certain circumstances because they care about their electoral prospects. Look at how Speaker John Boehner pushed through a “clean” debt-limit increase with the help of Democrats in the House and how Senate Majority Leader Mitch McConnell voted to break a Sen. Ted Cruz filibuster of this legislation. Party leaders know that it is in their interest to cooperate and keep the government moving so that voters do not abandon them as obstructionist.

It's always pretty to think that Washington will come together in bipartisan comity and start governing for the good of all the people. To think this will happen as a result of the vastly wealthy having even more influence than they already have strikes me as so optimistic as to be delusional. It's true that more money to the parties may ensure that they will work together for common goals. But they will logically be the common goals of the 1 percenters signing the checks --- like John Boehner's brave crusade to raise the debt limit.

The Tea Party and the GOP have the Kochs and other like-minded radical billionaires who will fund both sides of the coin. The GOP, after all, is not ideologically divided. There are no "moderate" Republican office-holders to speak of. Their coalition is divided on tactics, with the grass roots chomping at the bit to dismantle government as soon as possible and the Republican establishment wanting the same thing but knowing that it's smarter to let the water warm up slowly so the frogs don't jump out and bite them. (After all, their own voters will suffer right along with everyone else.) It's "repeal Obamacare in one fell swoop" vs. "kill it slowly with the death by a thousand cuts." The billionaires can easily play both the inside and outside games to accomplish the ultimate goals.

The Democratic coalition is much more philosophically riven with New Dems, progressives, red state moderates, blue state populists, hawks and doves, many of which overlap in some respects but often disagree strongly not only on tactics, but ultimate goals as well. The progressive populist dove wing is already under substantial financial constraints compared to the New Dems who define themselves with conservative code words like "pro-growth" and "fiscally responsible" -- words that are music to wealthy donors' ears. Oddly, there just aren't a whole lot of progressive billionaires out there who could balance them out with commitments to spend billions to help government redistribute their wealth. Go figure. So, you'll see "pro-growth, fiscally responsible" Democrats coming together to work with "pro-growth, fiscally responsible" Republicans, all of them answerable to the same bag of money. (Just don't call it corruption.)

So, it's pretty obvious that this potential truce in the partisan wars will come at the expense of progressives. One idea that's being flogged as the potential fix: activating small donors. After all, President Obama collected record numbers of small donations in both of his campaigns. A few bucks from tens of millions of engaged Americans ought to be enough to balance it out, right? The problem is that trying to raise money from small individual donors for down-ticket races is very tough. And it's down-ticket that's probably going to be flooded with the McCutcheon MAD money.

I have participated for some years in online activism through Blue America PAC and have helped raise quite a bit of money for progressive candidates. There are others like MoveOn,  PCCC, DFA and others that do the same work. And they all have raised millions over time and helped many progressive candidates. However, it's also true that the number of people who are willing to spend their hard-earned shrinking dollars on political campaigns is not very large, particularly for political campaigns in districts far from home. There will never be enough of them to equal the clout of the billionaires and even if there were, it's always more likely that an elected official will find it necessary to please that one person with a big check over a thousand $10 donors.

The public financing advocates have come up with a potential solution to that problem called the Grassroots Democracy Act. It would provide for a 10-1 ratio of public matching funds for donations under $100 along with a $25 tax credit. Even that wouldn't even come close to evening the playing field but it would certainly help. Unfortunately, that legislation has about the same chance of passing both houses of Congress as a declaration of Wicca as the state religion.

Meanwhile, we will still have highly engaged, radical billionaires who run to the pages of the Wall Street Journal to insist their only motive is to save America from the collectivists who are trying to deny decent God-fearing patriots their freedom, and recommit to spending mind-boggling sums on elections. Just to give you some perspective on what that means, take a look at the following illustration (via pagetutor.com), which compares a person against a bundle of $100 bills equaling $10,000. That bundle could fit inside your purse very easily. One million would fill a standard grocery bag while a billion dollars would fit inside a small room:

In 2011 the two Koch brothers together had 50 of those billion-dollar rooms. In 2014 Charles and David had 40 billion each.

It has always been the case in this country that there have been rich people — quite a few of them. These were people who could afford to send their children to private schools and colleges, they had nice houses — maybe a vacation home — perhaps a housekeeper. They certainly led different lives from ordinary middle-class and working-class people, but they lived on the same planet.

Yet with today’s income distribution there are many people with personal wealth of over half a billion dollars and quite a few billionaires. Those people do indeed inhabit a different planet from the rest of us. And for them, the Koch brothers and Sheldon Adelsons and George Soroses, spending $3.6 million every two years in federal elections, as the Supreme Court decision would allow, is literally inconsequential.

It's bad enough that they are being allowed to spend virtually unlimited funds on elections in the name of "free speech." But the real problem is that they have so much money that spending hundreds of millions is chump change for them. Until we are able to do something about the fundamental economic factors that allow such vast sums to flow to the .001 percent, this problem isn't really solvable.