"Deadbeat" and the problem with binge-watching slacker TV

Hulu Plus's latest original series is designed to be watched in one sitting. And that's what makes it so boring 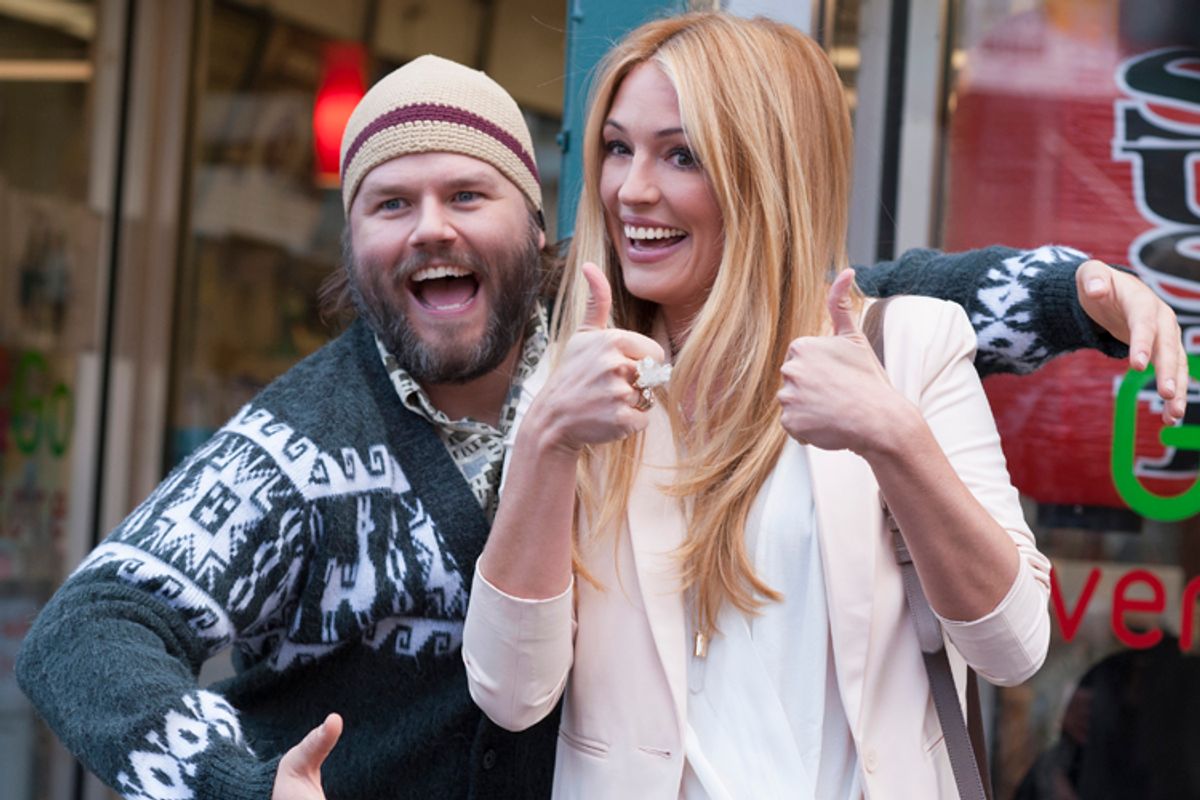 The premise of “Deadbeat,” the new original Hulu series starring Tyler Labine and Cat Deeley,  is simple. Kevin is a couch-bound, 30-something slacker, indebted to his landlord, his drug dealer-slash-sidekick (Brandon T. Jackson), and just about every other metro New Yorker he comes across. He is also a fairly powerful medium, meaning he is able – with no apparent effort – to see and communicate with ghosts. Kevin employs this talent as the basis for a hustle – not a subversive, raucous racket like Michael J. Fox’s in “The Frighteners,” but just a way to pay his rent. The sad-sack ghost hunter attributes his flailing business to a city grown immune to spirits, but I’d suggest his lack of enthusiasm might have something to do with his lack of clientele.  Somewhere within the “Deadbeat” press materials, the show is described as a cross between “The Big Lebowski” and “The Sixth Sense.” This is generous. With only a negligible fraction of the originality of either of those two cultural touchstones, “Deadbeat” has much more in common with less inspired supernatural slacker/stoner shows like “Wilfred” and Tyler Labine’s 2007 series “Reaper.” So, perhaps fittingly, it's lazy and unambitious, the narrative equivalent of an idle afternoon on the couch.

Ostensibly, Kevin is unhappy, but he seems unconcerned with any possible method of rectifying that situation. His only real imperative seems to be to get a date with Camomile, even though she’s a fraud, he knows it, and also she hates him. Somebody should sit this guy down and make him watch, at least, the last act of “Broadcast News.” Cat Deeley (“So You Think You Can Dance”) does not so much star in “Deadbeat” as recur. There are episodes in which she only shows up in the last two minutes and others in which she does not appear at all. Her repeated absence wouldn’t be so noticeable if her character did not represent what feels like the show’s only glimmer of uniqueness. She plays Camomile White – it’s funny because she’s British – a shrill but glamorous celebrity medium with no supernatural abilities bent on debunking Kevin’s real ones. OK, so, no, it’s not that unique, but Deeley leans into it like a "SYTYCD" jazz number.

The show takes two tropes with which we are all extremely familiar – the slacker comedy and the avenging ghost – and lowers the stakes. This has great comic potential; in the very first episode, Kevin is tasked by a disembodied soldier to help him finally lose his virginity. Later, another asks the medium to help his transplanted stomach prevail in an eating contest. I’m all for reveling in minutiae, but the result is a general lack of urgency, a sense that the show's creators put too much faith in the magical tonic of binge-watching. This is the unfortunate flip side to programs presented to us as binge-delicacies: If they don't give us enough to anticipate, it's easy to disengage.  If this were a network sitcom, dispensed in slight, spaced-out installments, it might be more entertaining. But when a slew of episodes are dumped simultaneously, its low-level drama and minor stakes simply feel dull.

I remember watching the first three episodes of HBO’s “John From Cincinnatti” and hoping it would get better or resolve into something that might hook me. That never happened, and the show was canceled. But there was enough potential in those early episodes that I kept watching for three weeks. Shows like “Deadbeat,” which are given to us all at once – six, 10, 12 episodes at a time – seem so much more disposable. The strategy works when there is an instant spark of originality and urgency – see “House of Cards” or “Orange Is the New Black” -- when the narrative arc feels perfectly tailored to fit the season as a whole.  But a sitcom like this – marginal in its conception, merely functional in its execution – is a different story. The slacker genre, it turns out, might not be a good fit for this kind of binge.

(All 10 episodes of “Deadbeat” will be available Wednesday on Hulu Plus.)