The 53-year-old star strips down -- and talks sexism 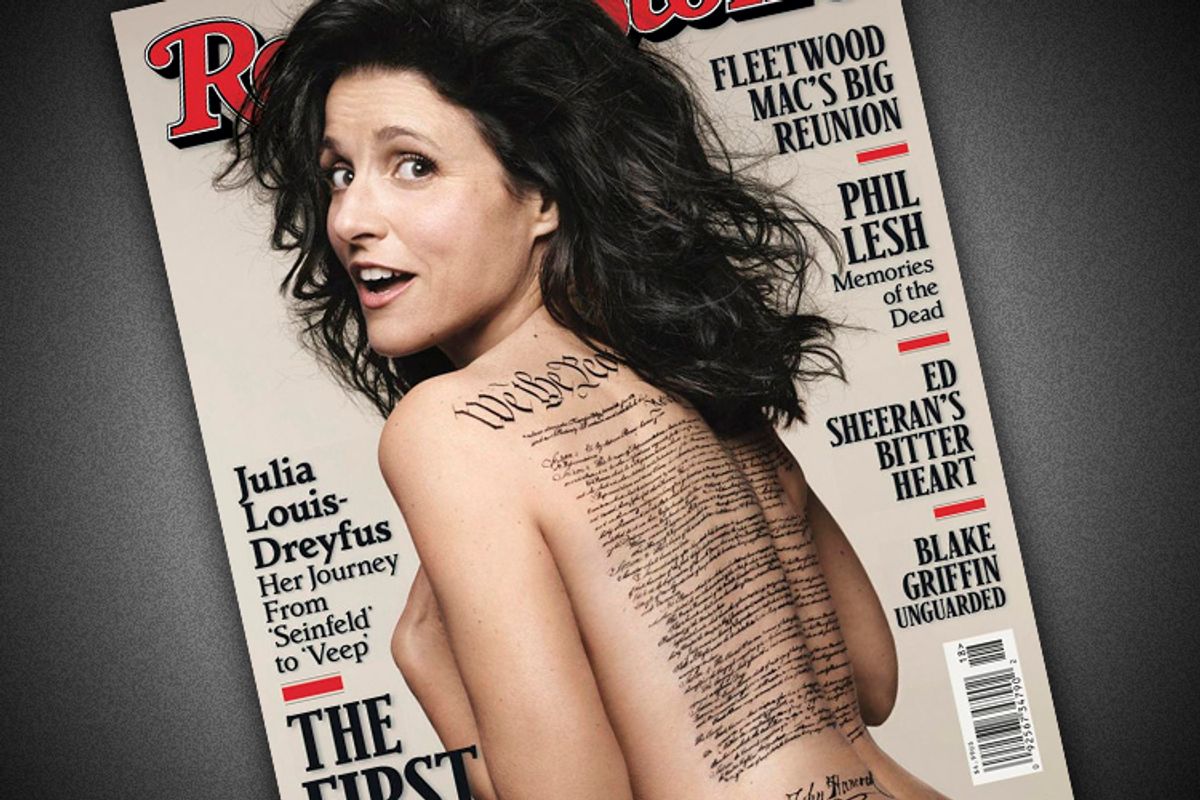 Two American treasures, together at last: the Constitution of the United States and Julia Louis-Dreyfus' butt. Well, thank you, Rolling Stone.

On the cover of the brand-new issue, the Emmy-winning star of "Veep" and one of television's most reliable comedic stars appears unclad with the historic document scrawled across her back -- and John Hancock's famed John Hancock right above the clearly defined crack of her posterior. It's an arresting image from a publication famed for its decades of provocative, frequently underdressed covers, from John Lennon to Janet Jackson to Miley Cyrus. But the magazine's sexy imagery is usually reserved for the Victoria's Secret models and the Lana Del Reys of the world, not 53-year-olds currently in their fourth decade in television comedy. As it approaches roughly the same age as its current cover star, Rolling Stone frequently finds itself vying for the attentions of seemingly disparate audiences, alternating between cover features on Lorde and the Beatles, Skrillex and Pope Francis. But in giving Louis-Dreyfus and her naked backside that coveted real estate, RS seems to have come as close to achieving something for everyone status as it's ever been. Kind of like the exact opposite of that Bieber cover a few weeks ago.

Yet looking at that photo of Louis-Dreyfus, I can't help feeling a mix of reactions. There's the obvious, GODDAMMIT SHE LOOKS INCREDIBLE. There's the undeniable pleasure that a woman well over the age of 25 can still be portrayed as frankly beautiful and sexy. A colleague Wednesday wondered what the unretouched version of that photo looked like – and hey, get on that, would you, Jezebel? There's no question the magazine doctors its covers for maximum va va voom – if its editors saw fit to improve upon Katy Perry they surely gussied up Louis-Dreyfus. Yet you need only catch the star's appearances at any recent awards show to affirm she is quite literally smoking hot. More significantly, in that cover photo, she appears with a furrowed brow and a smattering of lines around her eyes. She doesn't look sandblasted and over Botoxed. That a woman can be such a powerful figure in Hollywood -- a full-blown star carrying her own series – is an accomplishment at any age. Women make up only 37 percent of prime-time characters – and only 15 percent of them are over 45. Louis-Dreyfus ups the ante even further – her easy ability to captivate says that women don't have to become invisible just because they're not in their 20s, and blessedly aren't trying to look like they're in their 20s. Good for her.

And yet there's also a point at which one has to wonder, when if ever does it become OK to not be sexy anymore? I'm still reeling from our winter of 62-year-old Jane Seymour's bikini Us magazine cover, and 60-year-old Christie Brinkley's swimsuit People cover. Looking at Julia Louis-Dreyfus and her enviable body, I can't help remembering the equally knockout Tina Fey's words that "I know older men in comedy who can barely feed and clean themselves, and they still work. The women, though, they’re all 'crazy.' I have a suspicion — and hear me out, because this is a rough one — that the definition of 'crazy' in show business is a woman who keeps talking even after no one wants to fuck her anymore." The fact remains that for women, the body is political, evidenced by the reality that television comedy is not exactly riddled with female Louis C.K.s. We still live in a culture in which a woman's value is largely tied to her bangability. So if she's still firmly holding on to that bangability past the age of 50 and even 60, is this a victory -- or just one more unfair, eternal hurdle?

In her accompanying Rolling Stone interview, Louis-Dreyfus takes on the issues of being a female in the industry, admitting, "There is sexism – I'm not denying its existence. But I'm saying that I will deny its effort against me. I just pay it no nevermind and say, 'Get out of my way.'" Those are the words of a talented, accomplished, successful woman who's made a place for herself in a notoriously tough business. A woman who understands that feminism can be sexy as hell and embraces it. One who, amazing badonkadonk or no, has important things to do and say. I just hope to God she can keep on doing and saying them, even after no one wants to bone her anymore.