Revenge of the sociopaths: Why GOP shut Jeb Bush's compassion down

The party of Ann Coulter and Karl Rove doesn't want a lecture on tolerance. But there's a political motive, too 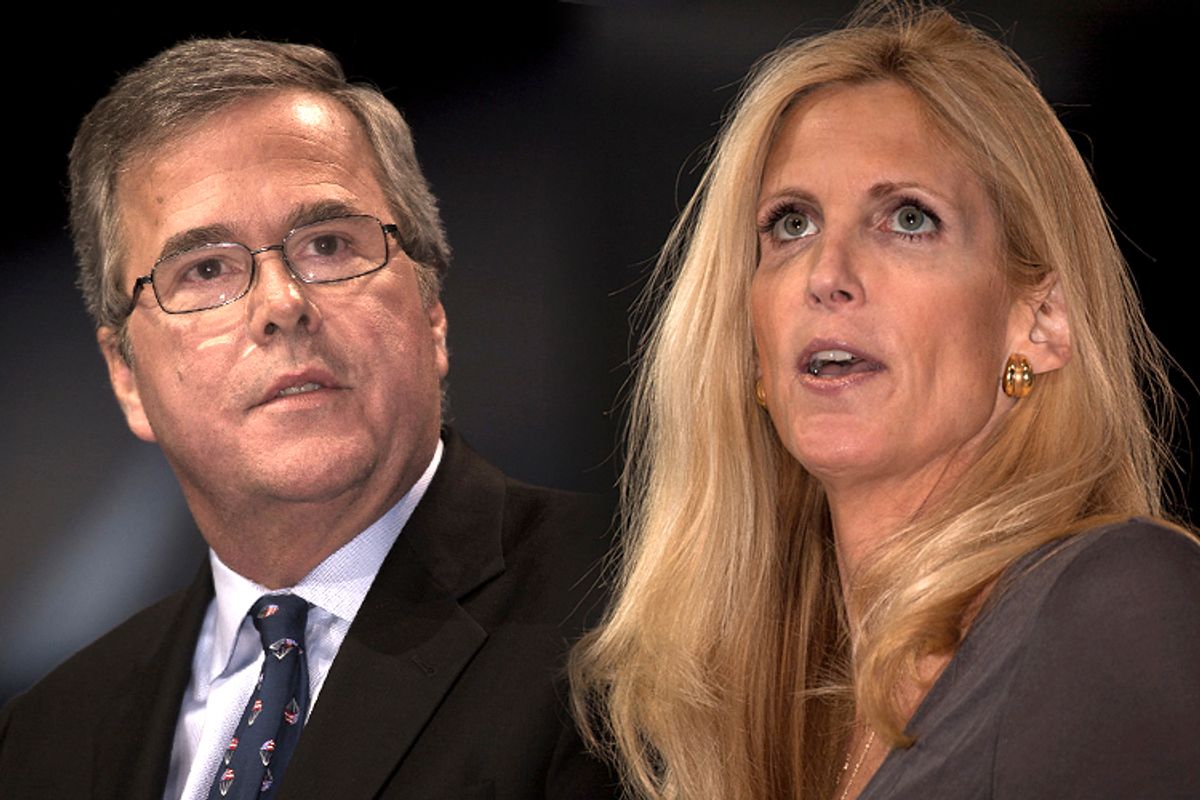 If there's ever been a case of a serious presidential contender who doesn't seem to have the fire in the belly, it's Jeb Bush. He makes Fred Thompson's somnambulant performance in 2008 look like Rahm Emanuel after shooting a triple espresso.

How else, for example, to explain what seem to be public utterances of an incoherent interior dialogue on the subject of immigration? It was just a few months ago that many in the GOP establishment called for the smelling salts over his rejection of a path to citizenship in his book called "Immigration Wars: Forging an American Solution," when various wags whispered that it appeared he was politically rusty and out of step.

Then, this week he switched gears and declared that so-called illegal immigration is an "act of love" calling forth the condemnation of none other than his brother's "brain" Karl Rove, who ominously warned him against using such terms and issued a pointed reminder that Rick Perry was roundly chastised for declaring that people who opposed immigration reform were "heartless." (It's one thing to deny millions of people basic human rights, it's quite another to imply that those who deny them are somehow lacking in compassion. Let's have some civility here, people!)

If there's one thing we've learned from our recent forays into the issue, it's that immigration reform is the third rail of GOP politics. Even the crudest Tea Partyer knows that the demographics are working against them, but the nativist strain of America's right wing is a powerful and enduring force that strongly resists legalizing undocumented immigrants for both cultural and political reasons. This analysis of a Washington Post poll last January shows the thin line all GOP hopefuls will have to walk:

65 percent of Republicans said that undocumented workers should not be given a way to live and work legally in America. Asked how a candidate's support for a path to citizenship for undocumented workers might effect their vote, 45 percent of Republicans said it would make them less likely to vote for that candidate while just 17 percent said it would make them more likely to support the candidate. (The plan House Republicans unveiled on Thursday did not allow for a path to citizenship but rather a path to legality.)

Helping make the nativist case to the base are conservative movement stalwarts like Phyllis Schlafly and Ann Coulter, who are pushing a defeatist line, basically telling them that pragmatism on this issue will do them no good:

Immigrants -- all immigrants -- have always been the bulwark of the Democratic Party. For one thing, recent arrivals tend to be poor and in need of government assistance. Also, they're coming from societies that are far more left-wing than our own. History shows that, rather than fleeing those policies, they bring their cultures with them. (Look at what New Yorkers did to Vermont.)

This is not a secret. For at least a century, there's never been a period when a majority of immigrants weren't Democrats. At the current accelerated rate of immigration -- 1.1 million new immigrants every year -- Republicans will be a fringe party in about a decade.

She's probably right, actually. And even without immigration reform, there will likely not be a real opportunity for a GOP presidency (barring external events or extreme Democratic incompetence) for quite some time. At the very least it's hard to see how they are going to thread this needle in 2016. Jeb's clumsy attempts to do it show the difficulty of trying to have it both ways. And Jeb Bush is not an amateur. He's been bred for this role and has spent his entire life in and around high-level politics. (And I think we all know that he's the "smart one" of the boys, right?) It's very hard to believe that he couldn't do better than this if he were serious about winning. Playing the thankless Jon Huntsman-Lamar role of premature anti-wacko bird seems beneath him, but that's the argument his defenders are all making. (Surely the party will start to moderate this time, right???) I don't have a sense that he's feeling the magic.

On the other hand, if you assume that the Bushes are serious about perpetuating their political dynasty, perhaps it makes a little bit more sense. Jeb has a rising star in the GOP coming up behind him, his son George P., who just won his first statewide race in Texas and whose status as the Hispanic Bush sets him up nicely as the leader of a GOP majority of the not too distant future. It could just be that Jeb's preparing the ground for the next President George Bush.