Is this the latest iteration of Silicon Valley backlash? 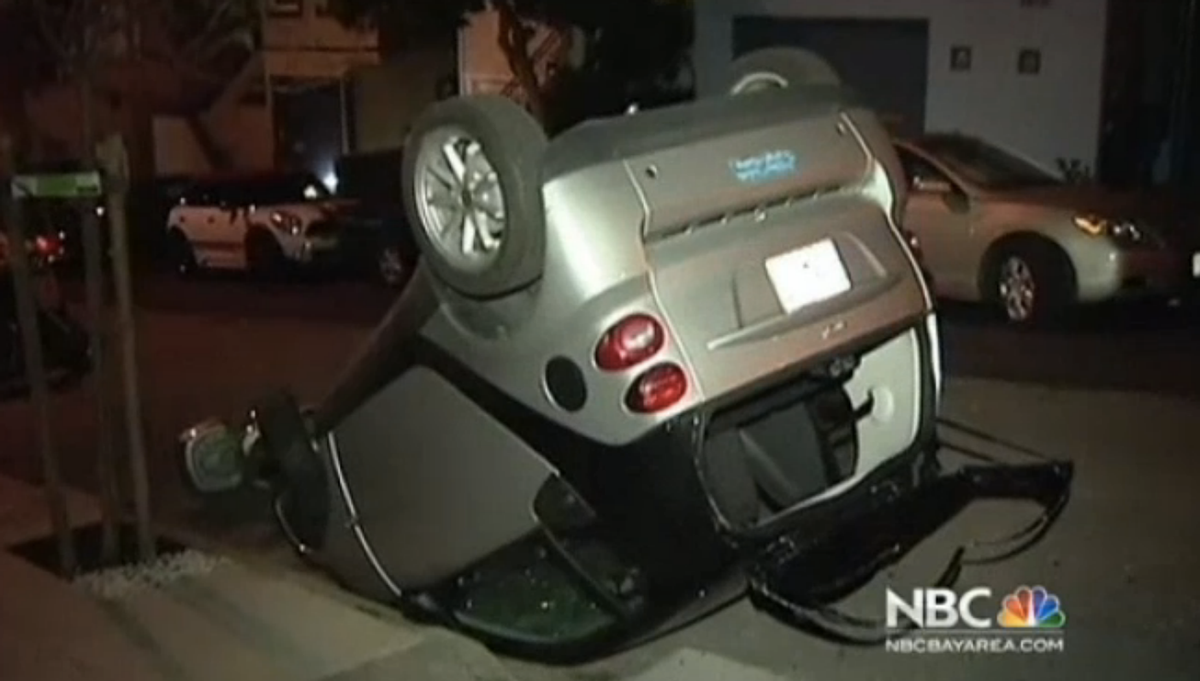 What do you get when you combine the age-old prank known as cow-tipping with San Francisco? Smart car-tipping, obviously.

Police are investigating a rash of recent incidents in which the lightweight, mini-electric cars were discovered upended or flipped on their sides:

Officer Gordon Shyy, a police spokesman, says the first car was found flipped on its roof and a second was spotted on its side around 1 a.m. Monday in the Bernal Heights neighborhood.

Shyy says a third Smart car was discovered flipped on its trunk around 1:30 a.m. in the Portola neighborhood, and a fourth was overturned shortly after 9 a.m., also in Bernal Heights.

Police say the small cars’ windows shattered and they suffered body damage. The vehicles were placed back on their wheels and towed away.

The incidents are under investigation. Police say they are looking for multiple suspects wearing black hooded sweatshirts who were in the area early Monday.

Trolling Smart car owners is nothing new, but doing so holds particular significant in San Francisco, where tensions between the tech industry elite and the city's "non-Googly population" are running high. Muses the Guardian, "It is unclear whether the stunts this week were pranks, or a wider statement on the escalating divisions between Silicon Valley's tech workers, who have been blamed for escalating living costs in San Francisco, and other residents."

Some residents are definitely seeing it that way: as victim Andrew Smith told KGO-TV, "The Smart car and the gentrification of San Francisco are linked in some people's minds." Not to mention, the tiny cars are a lot easier to take on than a bus...

But this is already larger than SanFran -- as of Wednesday morning, the trend has officially spread to Ohio: