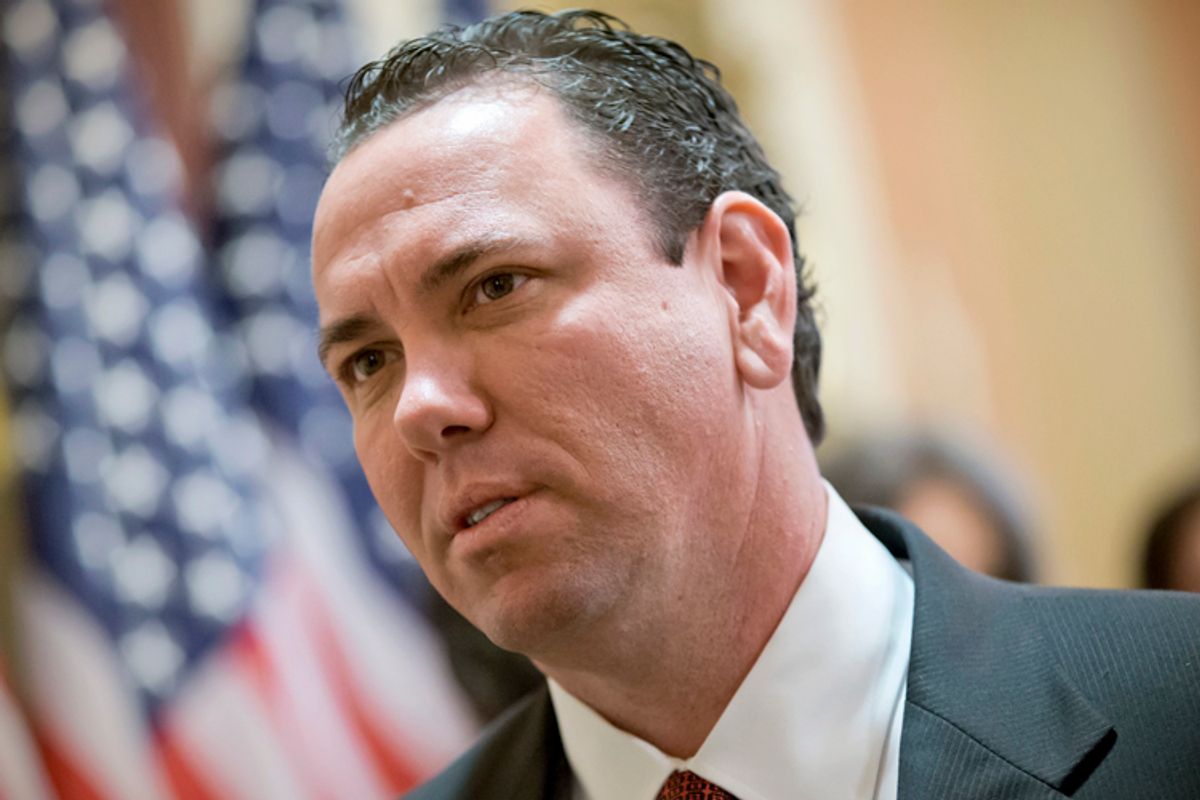 If you've not already done so this week, please feel free to take a moment to point and laugh at Vance McAllister. Go on. He has it coming. And then forgive him. Just let it go. Not because he asked for it but because it's the right thing to do when somebody does something stupid.

The very married, very Christian Republican father of five and Louisiana congressman has been on a public walk of shame ever since the Ouachita Citizen released a security cam video of McAllister snogging his district scheduler Melissa Peacock in his congressional office last December. On the scale of damning evidence, it's considerably less unnerving than, say, those photos of Anthony Weiner's junk, or the details of Eliot Spitzer's trysts with "the most beautiful vagina in New York." It was, however, more than enough to mortify a politician who until recently was best known as the man who'd managed to secure the endorsement of "Duck Dynasty's" Robertson family in a recent runoff election,  a rising GOP star who'd run on the promise he "would not shy from stressing his Christian faith." But when we said last fall, "We have to love our neighbor, which is the most bipartisan you can be," who knew he'd take it so literally?

Now, the married Ms. Peacock has stepped down from her post, and McAllister has found himself deploying the very same Christian vernacular that got him elected to atone for his transgression. "There's no doubt I've fallen short and I'm asking for forgiveness," McAllister said in a written statement this week. "I'm asking for forgiveness from God, my wife, my kids, my staff, and my constituents who elected me to serve. Trust is something I know has to be earned whether your [sic] a husband, a father, or a congressman. I promise to do everything I can to earn back the trust of everyone I've disappointed. From day one, I've always tried to be an honest man. I ran for Congress to make a difference and not to just be another politician. I don't want to make a political statement on this, I would just simply like to say that I'm very sorry for what I've done. While I realize I serve the public, I would appreciate the privacy given to my children as we get through this." Frankly, I'm most "disappointed" in the guy's spelling.

The list of elected officials who've groped and sexted their way to a little side action is impressive, and it's filled with colorful characters on both sides of party lines. When a politician has built his reputation on his ostensible conservative religious devotion, however, the fall is from a considerably greater height. But what's reliably exasperating, what makes it all too easy to call him a hypocrite, isn't the misdeeds but the apparent inability to learn any true Christian lessons from them.

The Bible is chock-full of characters who are royal screw-ups. Jesus is, after all, described as a guy who hangs out with "tax collectors and sinners." Peter completely throws Jesus under the bus and what does he get for it? He gets to be the first pope. Luke describes Mary Magdalene as a "sinner," and she gets a ringside seat for the resurrection. The thief at the crucifixion gets a promise of paradise. And what does Jesus say to the critics? "I desire mercy, not sacrifice."

Ah yes, mercy. So easy to ask for, so hard to bestow. So wouldn't be it fabulous if just once, some family values politician who got caught with his lips on a woman who isn't his wife could make the conversation not about him and his mewling need for forgiveness but about some genuine moral lessons in empathy and contrition?

I'm not recommending infidelity as a political career move, but I'm more than ready for a politician to acknowledge that you can't ask for compassion if you're not prepared to dole it out. I'm ready for a Christian values candidate who's clearly gone way off the Christian values family plan to say, you know what? I did a dumb, selfish thing, and I'm super sorry, and what I get now is that shame and blame are not useful tools for social progress. I'm going to treat you, the voters, the way I'm asking you to treat me right now. I'm not going to put you down for the choices you've made in your private life. I'm going to try to conduct my life with honesty and integrity, but I know what it is to fall short in that regard, and I'm not going to be some self-righteous a-hole about it. Let my bonehead move be an opportunity not just to ask you to do me any favor of forgiveness, but to learn to be better at giving it to others, so I can be a better leader. The Bible says, "All have sinned and fall short." That's me, voters.

Man, I'd vote for that guy. I'd vote for someone who has made mistakes and figured out from them how to be a better human being over the one who's busy condemning everyone whose personal life doesn't match his own public image. Meanwhile, what Vance McAllister seems still not to get is that this isn't just about "earning back the trust," because, really, he doesn't need to make amends for his private makeout sessions to anybody other than his family and Ms. Peacock's. What he needs to do is man up and show what it means to learn from your mistakes, instead of just hollowly apologizing for them.