Exclusive: Maryland mom says retail giant trying to quiet her after company policies cost her a degree -- and more 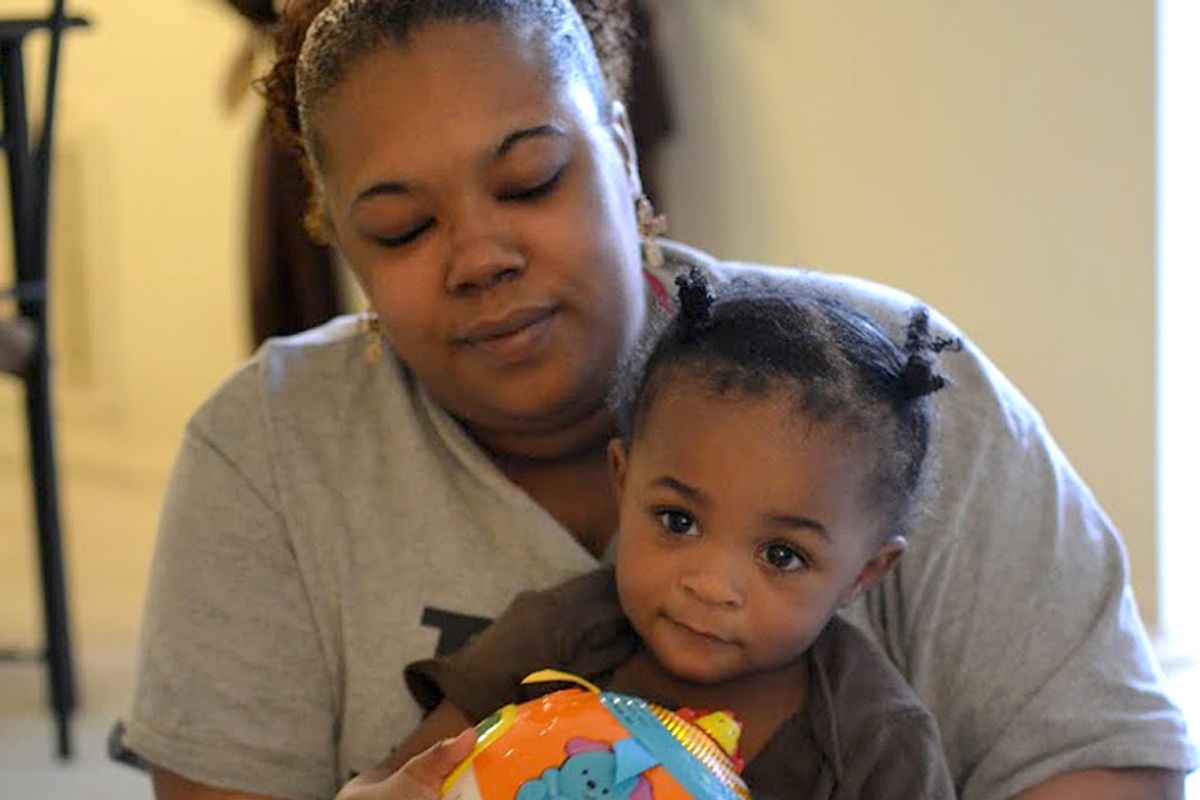 Wal-Mart worker Tiffany Beroid alleges that the retailer's refusal to accommodate her high-risk pregnancy cost her a nursing degree, forced her husband to work 18-plus hours straight, and "basically split my family in half."

Beroid featured prominently in a Saturday story by the Washington Post’s Lydia DePillis, reporting that Wal-Mart had issued a new policy stating that women “may be eligible for reasonable accommodation” if necessitated by “temporary disability caused by pregnancy.” That change represents a partial fulfillment of the demands of union-backed non-union group OUR Walmart, and its campaign “Respect the Bump.”

Beroid alleged to Salon it was the Post story that spurred multiple managers to castigate her in a same-day meeting over a supposed infraction that she said had never been an issue in the past. A Wal-Mart spokesperson denied that allegation, telling Salon in an email that it was “unrelated” and regarded as “a separate work performance issue.”

Salon spoke with Beroid – on that meeting, how Wal-Mart handled her pregnancy (“it basically split my family in half”), and the retailer’s new policy shift. A condensed version of the conversation follows below.

What has been your experience with being pregnant and working at Wal-Mart?

My experience was basically a disaster …

When I asked to do light [duty] work, and I presented all my documents from my doctor [showing it was a high-risk pregnancy] to my manager at Wal-Mart, they basically denied my light duty, saying that they didn’t have any light duty work on my pay scale because I was a customer service manager.

What should they have done in that situation?

I feel like what they should have done was given me the opportunity to have light duty, because they did have light duty positions available, such as door greeters, or operators, or even being the cashier or customer service worker that sat on the stool from time to time.

Would you have been willing to take the [lower] pay rate for those positions?

Instead, they basically forced me to take an unpaid leave, which made me financially not able to support, you know, going to school and finishing my degree in nursing. It basically split my family in half, because my husband was constantly going, trying to pick up extra hours at work, so we were able to pay our rent and meet our monthly basic needs …

How did that end up affecting your family and your career?

My husband had to work 18 -- sometimes he even worked 24 – hours. And before he could come home, he actually had to, you know, take a nap in the parking lot, so he didn’t have to drive on the road so exhausted and tired. So he didn’t have an accident.

And for my career … My goal was to be a nurse, and at that point I couldn’t continue on because I was delinquent [in tuition payments] with the school. And they wouldn’t let me take my final exam, so I have to repeat that whole course all over again. And I was at the end of it, with a 4.0 GPA …

I wasn’t working, so … I wasn’t able to have that payment.

How did Respect the Bump start?

Respect the Bump started with one of the five workers from California named Girshriela. She actually starting posting things [online], and wanted to know concerns about pregnant women at Wal-Mart. And I posted my story …

[We] communicated from then on out, like, “What could we do to change things?” So … other pregnant women didn’t have to go through these things that I did.

Was this over Facebook, or in person, or both?

… When I responded to her post, she messaged me, and from then we switched numbers … We kind of just messaged back and forth on the phone, and Facebook conversations.

How big did the Respect the Bump group get?

Very large, because women across the world started responding to the posts. At one point they made me a poster child for like two weeks, which [means] they took my picture and my story, and they posted it on Facebook. And it kind of went like wildfire, because women -- and even men -- started commenting on the experience either they had, or their wife had, or someone related to them had.

And you know, then we starting responding, and being there for each other, and started conferencing [with] each other, and telling one another what we can do to try and resolve this …

What do you make of the change that Wal-Mart has announced?

I’m very excited that they did make the change. But my concern is that it doesn’t work for all pregnant women. Because, I mean, the policy states that it is for women with complications. And when you had a “normal” pregnancy, and say you’re a maintenance associate, then you’re around chemicals all the time, and we all know that that’s unhealthy for the unborn child and the mother. So in that case it doesn’t accommodate a pregnant woman …

They should accommodate all pregnant women.

Since this announcement got made and you got media attention for it, has there been pressure or scrutiny or retaliation on you in your store?

Of course. I experienced retaliation on Saturday, which was the day the Washington Post released the policy change and all that information. I was actually pulled into the office and was intimidated. I had two salaried managers that were there in person, and they also had the store manager on the phone. And they refused [to allow] another OUR Walmart member … an associate in the store – I asked could she be present in the room with me [as a witness], and that got denied.

… They [ostensibly] pulled me into the room because I [authorized] one cashier to go to personnel, to receive some of her personal documents that she had asked me [if she could]. And I told her to go take care of it first, so she wouldn’t have to worry about it on the register. So she did that.

And then immediately after that happened, I got pulled into the office, with all these managers that was there, you know, saying I did wrong, I wasn’t supposed to supervise her. But that’s how I normally do on my shift …

Did they issue you discipline?

They did do an open door with me, basically telling me what I did was wrong. But before we could get to the middle of the meeting, because there was three managers, I felt very intimidated, and things were getting pretty heated, and I felt like I was in a hostile environment. And I mentioned that, and I told the store manager that if he wanted to, you know, to further it, that I would be there Monday afternoon to continue with the process. So I left right after that and went back to doing my work on the sales floor …

I know it was a retaliation because of the fact the store manager … said, “Let’s be real”… he said, “I know what you’re trying to do” …

Did they say anything directly about the article or about Respect the Bump?

They didn’t say anything directly, but they kept mentioning that I was “a leader in Wal-Mart,” and to me that means … the fact that I am an OUR Walmart leader …

What do you think they’re trying to do by pulling you in the office like that?

I think with me releasing this article, and being part of the policy change … it starts to scare them …

Now they feel like they need to retaliate … so I don’t do any further action.

Of course. We grow strong every day, and we’re growing every day. You know, every day across the country, an associate is standing up against retaliation, intimidation, being bullied, et cetera.

I think … OUR Walmart is something that’s here to stay, is not going away, and is going to continue to grow.