Remember the almost-war in Syria last year? An amazing new report -- which our media won't touch -- is a must read 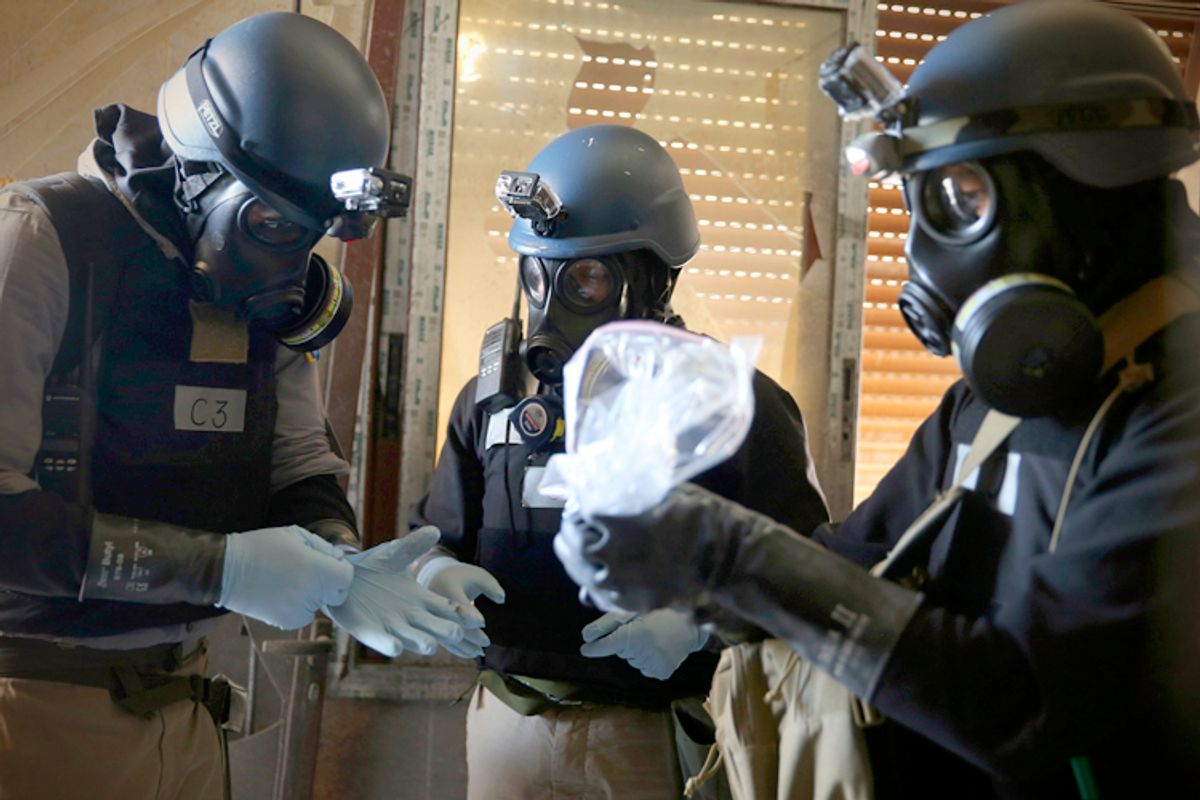 A U.N. chemical weapons expert holds a plastic bag containing samples from one of the sites of an alleged chemical weapons attack in Damascus, August 29, 2013. (Reuters/Mohamed Abdullah)
--

Am I misjudging our time, or have we entered some accelerated cycle of American subversions, and then another cycle of coverups and disinformation that do not quite come off? In less than a year, the Obama administration has mounted four covert coup operations, all variants of the classic Cold War model, all costly of human life, all assuring us the contempt and animosity of many people for years to come.

* The American-authorized coup in Egypt last July. In the disinformation universe, Washington watched at a distance. Since the coup, dead silence in the face of a blood bath, except for Secretary of State Kerry’s applause for the Egyptian army’s “restoration of democracy.”

• In the war to depose Syria’s Bashar al-Assad, the linchpin event is the chemical-weapons attack last Aug. 21. We are invited — required, actually — to believe Assad allowed U.N. inspectors in to determine responsibility for previous gas attacks and then launched another attack near Damascus while the inspectors were settled in their hotel rooms.

* The role of the U.S. and its European allies in financing, fomenting and steering the direction of the Ukraine coup requires little discussion at this point. Rather bizarrely in the face of all we have on record, the Obama people continue to insist Ukraine is nothing more than a case of Russian overreach. As order unravels in the eastern sections of the country, it is important to bear in mind the chronology of events — and from the beginning, not somewhere in the middle.

* In Venezuela, the foreign minister recently read aloud portions of intercepted cable traffic documenting American subterfuge. No, no, no: Nicolás Maduro, successor to the late Hugo Chávez, is just as paranoid as his mentor, and both were merely trying to distract Venezuelans from their economic problems. (Vigilance is always essential when Washington and the hacks marshal the “distraction” thesis.)

Cuba could go on this list, given news of Washington’s operation of a social-media network on Cuban soil via the customary collection of front companies, except that intruding covertly in Cuba is so routine as to be (appallingly) unremarkable.

I find this an exceptionally busy schedule for the spooks and the nation-building set. We can explore the reasons on another occasion; for now, it seems also unusual that so much of what in an earlier time would remain hidden from view is not.

Seymour Hersh, the noted investigative journalist with a record of extraordinarily deep digging on behalf of obscured truths, has just made a significant contribution in this line. Here is the piece, just published in the London Review of Books. In it, Hersh detonates the Rube Goldberg of “evidence” concocted — not too strong a term now — to support the Assad-did-it case after the gas atrocity in Syria.

It is the usual Hersh job: granular, multi-sourced, supported with document citations, a shedding of light, all from several layers beneath surface reality. This is especially important in the Syria case because the demonization of Assad has been so complete as to cause almost everyone to set logic aside. Lonely were they willing to say after the attack: We do not know the perpetrators here, but there is a compelling case that it was Assad’s adversaries, not the unsavory man himself.

Hersh has just stitched this case, an important piece of work.

The trail into what happened begins with a sample of the gas used near Damascus given to Porton Down, the British military’s laboratory not far from London. The sample came via a Russian military intelligence operative, and the British found it did not match the Syrian army’s known stocks.

British intel quickly advised Washington that the case against Assad would not bear scrutiny. Revelation No. 1: Now we know why Obama abruptly asked for congressional support for his plan to shell Assad’s military. He wanted to pull a George W.: offloading some of the blame if it came out Assad was not the perp on Aug. 21. Bush had done the same when the WMD case against Saddam Hussein came undone a decade earlier.

Hersh tell us that it had long been known in American defense and intelligence circles that Syrian rebels, notably the jihadist al–Nusra Front, had been developing chemical-weapons capabilities. There had been attacks in the spring of 2013 that the U.N. subsequently investigated. American media never reported the conclusion.

Here is an example of why you have to be grateful Sy Hersh is walking around. He quotes “a person with close knowledge of the UN’s activity in Syria” as saying: “‘Investigators interviewed the people who were there, including the doctors who treated the victims. It was clear that the rebels used the gas. It did not come out in public because no one wanted to know. ’”

After the attacks in the spring of last year, the White House began suppressing intelligence that concerned chemical-weapons use in Syria. Too many indications were accumulating that the insurgents, which the Obama administration painted as democratic liberators with a view to arming them, had used chemical weapons and were training to get better at it.

Once again following the Aug. 21 atrocity, no one wanted to contaminate the White House line with the truth about what was known — too political, which is a common story. U.S. intelligence had discovered that al-Nusra had executed the attack with the support of Turkish Prime Minister Recep Erdoğan.

This gets especially interesting, as nitty-gritty with Hersh’s name on it often does, but you have to follow the bouncing ball into unexpected places.

Obama had signed a secret agreement with Erdoğan in early 2012 to acquire and transfer weapons from what had been Gadhafi’s arsenal in Libya to the Syrian insurgents. Turkey, the Saudis and the Qataris — all supporting the jihadists on religious grounds — would pay. The CIA and MI6 would set up what they called the “rat line” — the supply route from Libya to the rebels inside Syria. It was the usual thing: front companies, American veterans on contract; the operation was overseen by none other than David Petraeus.

That is revelation No. 2. No. 3 is a follow-on: That consulate in Benghazi that was attacked in September 2012 was not actually a consulate. Hersh’s source: “‘The consulate’s only mission was to provide cover for the moving of arms. It had no real political role.’”

After the assault in Benghazi, the CIA bailed on the rat line. And we come to the central connection. Erdoğan figured he was left to twist in the wind, given the war was turning against the insurgents by this time. So developed his fateful strategy: Train and equip al-Nusra to wage serious chemical warfare, then stage a gas attack to be pinned on Assad. Obama would be drawn across his “red line,” like it or not.

It is all there in the Hersh piece, not to be missed: the politics, the training, the sarin supplies, the dramatis personae, who knew what when. And the salad of denials all around, a feature of Hersh’s stuff that never fails to delight. He can even describe (using multiple sources, that antique practice of yesteryear’s journos) a secret dinner Obama gave for Erdoğan, at which the former told the latter, “We know what you’re up to in Syria.”

The Turks wanted “to do something spectacular,” as one of Hersh’s sources explained — something to shove the Americans into the war. And now we know why there was a gas attack in Damascus last Aug. 21, three days after the U.N. inspectors got there. It was spectacular; you have to give the Turks and the insurgents this much. (And spectacularly stupid — too stupid for Assad to have done it, as I argued in this space at the time.)

Hersh’s sources speculate that the Turks will continue supporting the Syrian insurgents, however poorly the war goes for them. It is anyone’s guess what the Obama people will do, other than deny Hersh’s report and pretend once again the revealed remains secret. “‘If we went public with what we know about Erdoğan’s role with the gas, it’d be disastrous,’” one of Hersh’s sources tells him. “‘The Turks would say: “‘We hate you for telling us what we can and can’t do.’”

I have not paid attention in the past, but Hersh is the kind of journalist who can engender a pack of lightweights who nip at his ankles in attempts to discredit the reporting. Beware of these people, clerks of the political cliques. I mention this because a Washington friend already sends a piece from Bloomberg View, the opinion section of the Bloomberg News operation. “Hersh has shed no light,” is the conclusion of columnist Marc Champion.

Champion is a man of innuendo, false feints, faulty logic and the odd lie when nothing else will do the job. He has nothing of importance to say in his attempt to discredit a reporter whose printer cartridge he could not change, to update the old phrase, but the piece is too flimsy to be worth a lot of lineage, honestly. Just one point to put readers on their guard.

Champion’s main critique concerns the source of the sarin gas that arrived at Porton Down. This was the Russian military operative. You cannot trust a Russian, Champion advises in fluent Cold War-ese. There is a provenance question with regard to the sarin sample. This is the cotter pin of Hersh’s case, Champion says. Remove it and the thing comes apart.

Not so fast. Answers, please: Why did the Porton Down lab work on the sarin sample if there was any possibility of taint? There would be no point and they would not have done so, or they would have looked at the sample but warned of possible taint. Why did Hersh’s source on this, an American well inside the intel scene, describe the Russian as trustworthy? Not too common, this. He did so out of loyalty only to the truth.

Why did Porton Down urgently advise defense counterparts in Washington that the case against Assad was not holding up? Why did the Defense Intelligence Agency then ask a source in the Syrian government for a typology of Assad’s chemical weapons and confirm on this basis that Porton Down was right: Assad was not the culprit?

Why did American military officers look at Porton Down’s material and then send Obama a last-minute warning not to strike? And why, finally, did Obama heed the officers, seek cover in Congress, and ultimately step back from the threatened missile attack?

Champion’s ruse is to pretend Hersh describes his own beliefs. He does not. He reports the conclusions of senior officials not exposed to political pressure. There is a big difference. Champion, to finish the thought, writes out of a need to believe.

Read the piece. Bush league commentary, in both senses of the term. There is a lot of it around these days, if you could conceivably not have noticed.