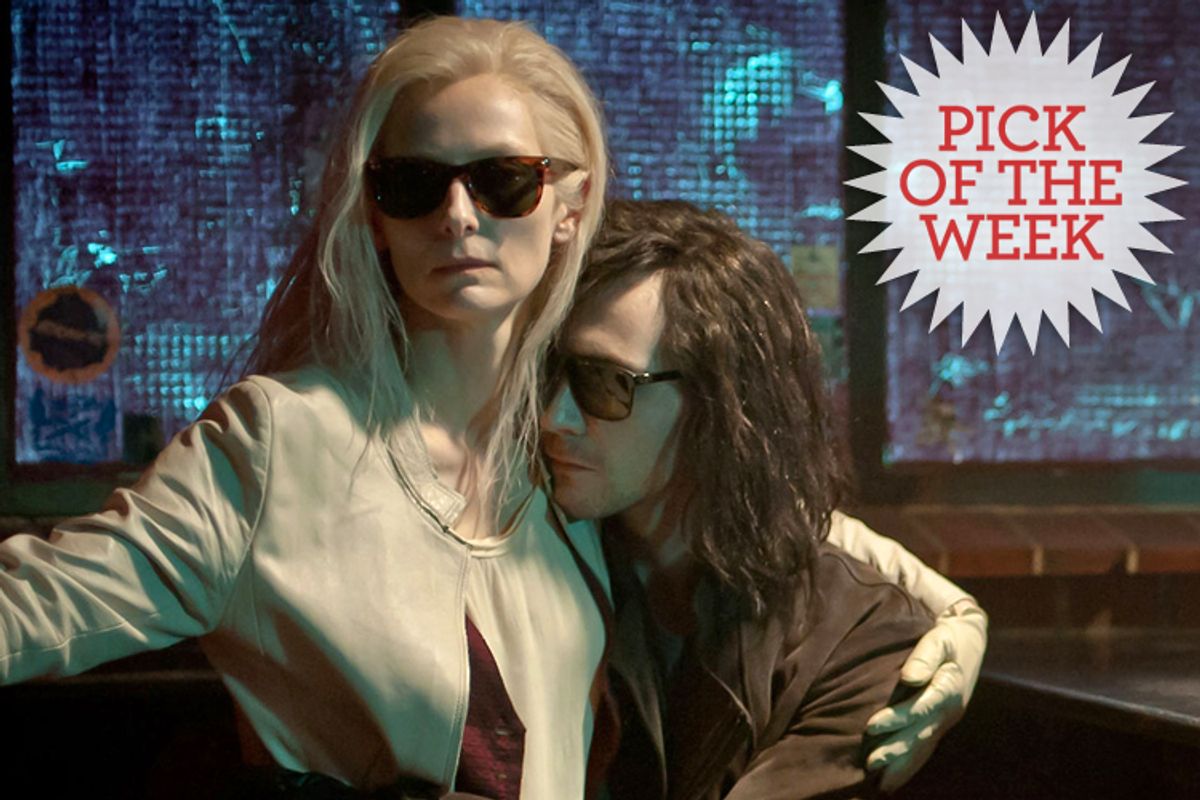 One way of understanding Jim Jarmusch’s long-delayed vampire movie “Only Lovers Left Alive” is as an alternate-universe sequel to Anne Rice’s bestselling “Vampire Chronicles,” one that depicts the subculture of bloodsucking immortals as a bohemian rebel caste of outsiders, but without the Goth drag, the aristocratic pretensions or the secret societies. It’s a genre picture that sticks to long-established convention: Vampires must drink human blood to live, cannot go out by daylight and can be killed with a wooden stake through the heart (or a wooden bullet, as it happens). It’s also a Jim Jarmusch movie, which means it’s obsessed with desolation and decay, with vintage American music, and with the residue of the past in the present. It’s shot through with sadness and beauty, with dry humor, with the certainty that even things meant to last forever actually don’t.

As with many of the films of Jarmusch’s later career – by which I think I mean everything since “Dead Man” in 1995 – there’s also a level of social or political commentary in “Only Lovers Left Alive,” which you can view as entirely whimsical or partly serious. (Many Jarmusch fans were displeased that he ventured into explicit political critique with “The Limits of Control.” I dug it.) Tilda Swinton and Tom Hiddleston play a gorgeous tragic-romantic couple called Adam and Eve, who’ve been together for centuries but now find themselves, for all the usual and understandable human reasons, living apart. He’s a reclusive underground musician hiding behind heavy drapes in a Detroit mansion, among the ghosts of American industry; she’s a spectral, white-clad figure with a gorgeously decorated flat in the old city of Tangier, where Delacroix, Matisse, William S. Burroughs and Brian Jones sought their muses. (No doubt Eve knew them all; she’s apparently older than Adam, joking at one point that he missed “all the real fun” of the Middle Ages.)

Adam and Eve avoid human society because of their unusual diet requirements and infinite life expectancy, to be sure, but also because the “zombies” – that would be you and me – have wrecked the world so badly. Whenever possible, they avoid feeding on live humans (whose blood is too unpredictable and full of chemical and viral poisons) and seek out sources of the good stuff. Adam infiltrates a Detroit hospital (wearing scrubs that identify him as “Dr. Faust”) and bribes a technician for clean O-negative; Eve has a connection to a French doctor in Tangier, through a revered senior vampire played by John Hurt. I’m aching to tell you more about him but will restrain myself. Let’s just say that a long-standing mystery of the Elizabethan age is solved at last. (We also learn why one of Schubert’s string quartets is a lot weirder than the others.)

If you’ve ever seen a Jarmusch movie before, you don’t need me to explain that “Only Lovers Left Alive” is not long on plot, still less on action or gore. One rumor associated with this film’s agonized production process is that when its producers suggested a bit more bloodletting and a faster pace, Jarmusch responded by cutting out action scenes he had already shot. This movie hooks you with its druggy, buzzy late-night vibe rather than with its story: It’s about Hiddleston in a vintage muscle car (help, please – it’s something strange that I couldn’t identify) rolling through the abandoned streets of the Motor City, and Swinton as a pallid ghost drifting through the alleyways of the Arab souk while men hiss at her, “I have what you need.” (Indeed they do, but not in the way they think.) While Jarmusch and French cinematographer Yorick Le Saux had to shoot on the ubiquitous Arri Alexa for budgetary reasons, they’ve done their best to make this look like an art film from sometime around 1987.

Things do happen, eventually. Eve travels to Detroit by a series of night flights, loading up her suitcase with volumes of Arabic poetry, Cervantes and Molière in the original and “Infinite Jest.” Her sister Ava – what “sister” means in vampire culture is unclear – who is played by Mia Wasikowska and is obviously bad news, shows up not much later, her suitcase full of short dresses and strappy heels. She has her eye on Adam’s over-eager zombie assistant, Ian (a wonderful supporting turn from Anton Yelchin), and not in a good way. Part of the humor here comes from the fact that you could subtract the elongated canines from this story and still have a Jim Jarmusch movie: The brilliant but antisocial junkie musician, the acid-tongued ex-wife in a foreign city, the deserted Packard factory, the awesome soundtrack (vintage R&B, Arab pop, Paganini and the Detroit band White Hills), the slutty and unbalanced sister.

As I’m pretty sure Jarmusch would agree, he possesses the cultural status of Adam and Eve at this point, even if he’s not hundreds of years old. He’s nearly the only lover left alive from the glory days of American independent film. Along with maybe John Sayles, he’s the last survivor of the early ‘80s who has kept on making movies as funding has grown more and more difficult and the audience dissipated to cable TV. (Jarmusch’s movies make money in Europe, if they make any at all.) He never made any serious effort to get paid as a Hollywood director, though he had his chances after “Stranger Than Paradise” and “Down by Law.” (He told me once he had thought about it and decided he’d be terrible at making mainstream movies.) This might be the most commercial-sounding project of his entire career: a vampire movie, with name-brand actors! It took him seven years to scrape together $7 million to make it, a sum that wouldn’t pay for five minutes of Michael Bay’s latest CGI atrocity.

I don’t detect any self-pity amid the extended erotic-bohemian hangover of “Only Lovers Left Alive,” but there’s definitely a wistfulness and a consciousness of enormous loss. With their leather-bound volumes, their extraordinary collection of musical instruments, their walls covered with portraits of artists and writers across the centuries, Adam and Eve are like custodians of culture who have no one to pass it along to. They have adjusted to the world of airplanes and iPhones – Eve has an Apple, of course – and high-tech audio equipment (where Jarmusch found all that ‘80s gear for Adam's home studio I have no idea), but they come to it with a historical background that marks them as permanent outsiders. At one point Adam is incautious with Ian, telling him that he once saw Eddie Cochran play a modified Gretsch Chet Atkins guitar that he now owns. He quickly adds: “On YouTube.” We live in a culture that claims to cater to everybody with its tidal enthusiasms, its dizzying ebb and flow of hipness. But the real artists and scholars and devotees, now as always, must drink blood and live in the shadows.

“Only Lovers Left Alive” is now playing in New York and Los Angeles, with national platform release to follow.