"They treat them like total garbage": NBC's latest worker humiliation 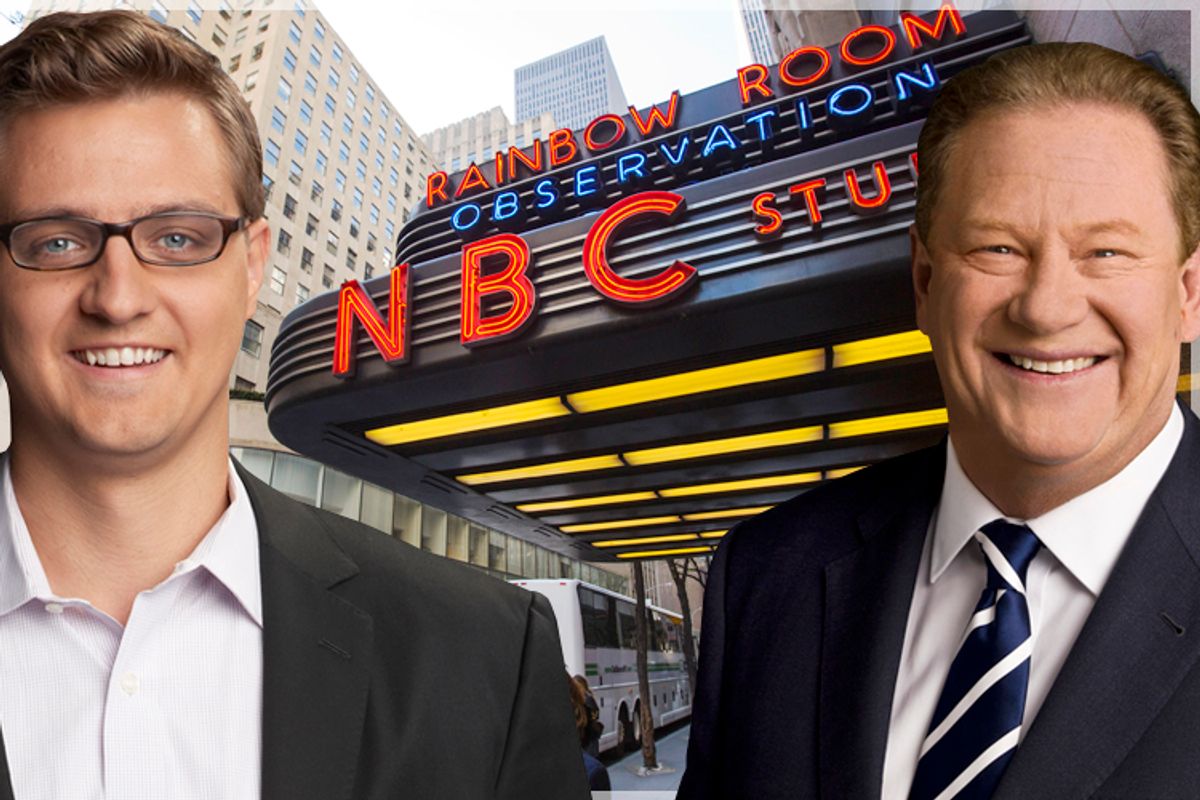 In another challenge to NBC Universal’s worker-friendly bona fides, Obama appointees at the National Labor Relations Board have found the company guilty of illegally “failing and refusing” to negotiate with employees. That ruling comes as NBC awaits a Labor Board ruling on a dispute at its Peacock Productions subsidiary – a battle in which workers have pleaded for support from MSNBC hosts.

“Wherever they feel they can take, and they can do it cheaper, and do it without union labor, you know they’re gonna try doing that,” said Steve Ross, the president of National Association of Broadcast Employees & Technicians Local 53, a division of the Communications Workers of America union. Alleging NBC required 12-hour days without overtime pay or lunch breaks, Ross told Salon, “They treat them like total garbage.” NBC Universal declined a Wednesday request for comment.

The unanimous NLRB ruling found that NBC has violated the New Deal National Labor Relations Act by refusing collectively bargain with “content producers” at its local TV stations, and refusing to provide information about their pay, discipline and scheduling requested by their union.

That “content producer” position was created five years ago by NBC, a move Ross charged was designed “to eliminate the union” by reclassifying the work of close to 100 unionized writers, editors and photographers. In 2011, the regional NLRB sided with NABET in finding that those new “content producer” jobs were part of the already-unionized bargaining unit; last year the national NLRB chose to leave that ruling in place. According to the new NLRB ruling, NBC “admits its refusal to bargain and to provide information,” but stuck to its guns on the ground that – the Labor Board’s finding notwithstanding -- the content producers aren’t really part of the union.

The NLRB decision orders NBC to “cease and desist” refusing negotiations and “interfering, with restraining, or coercing employees in the exercise of the rights guaranteed” under labor law, and to post workplace notices promising to do so. The NLRB is prevented by law from imposing punitive damages, and NLRB decisions can be appealed to federal court. “We’re excited about it,” Ross told Salon, “but the company has said … if they have to go to the Supreme Court, they’ll appeal it there.”

Those content producers aren’t the only workers NBC is claiming aren’t union members it has to negotiate with. As I’ve reported, the Writers Guild of America-East is accusing NBC of voter suppression, hypocrisy and union busting at its Peacock Productions subsidiary, where the results of a 2013 unionization election were impounded after the company insisted the workers involved were supervisors ineligible for unionization. Workers also alleged to Salon that in the lead-up to the vote, managers targeted and retaliated against union supporters and told employees that unionization could lead to Peacock Productions being shut down.

“Comcast/ NBCU profits from presenting MSNBC as the progressive voice on American television, while depriving content producers, and Peacock writer-producers, of their own voice,” WGA-E executive director Lowell Peterson argued in an email to Salon. “That is hypocrisy, pure and simple.”

While the Peacock case remains pending at the NLRB, workers – backed by a MoveOn-hosted petition and an AFL-CIO officers’ letter – have sought public support from five prime-time MSNBC hosts: Al Sharpton, Lawrence O’Donnell, Rachel Maddow, Chris Hayes and Ed Schultz. Given that they “are quite supportive of the American labor movement …” ex-Peacock writer/producer Steve Rivo argued to Salon, “it would be fitting for them to express support for their colleagues who are writing and producing shows on the same network, but who are being denied the opportunity to join a union.”

While none has publicly declared their support for Peacock Productions workers or directly addressed NBC’s alleged union-busting, several sources told Salon that Hayes met privately with the workers. In contrast, Schultz drew heat from the left after responding to Salon’s December inquiry by emailing, “MoveOn.org has never been an ally of Ed Schultz, why should I help you with a story?” then took to his radio show to denounce the “class envy” of those who took issue with his response. The following week, Schultz opened his TV show by emphasizing, “I support workers in every workplace in America when it comes to fair share, collective bargaining and the vote,” without specifically addressing Peacock Productions. Union presidents like CWA’s Larry Cohen are frequent guests on Schultz’s show.

Schultz faced a legal setback of his own this month: A federal appeals court revived a lawsuit, quashed at the district court level in 2012, by NBC broadcast engineer (and NABET member) Michael Queen. The suit accuses Schultz of fraud and breach of contract; Queen claims he entered a partnership with Schultz in 2008 to try to secure Schultz a TV show, but was never properly compensated for his efforts. “We pitched the TV idea to various network executives, produced a TV pilot, secured an apartment in D.C. for Ed and his wife Wendy and even gave them a car to drive free for three months,” Queen charged in a statement. “We picked them up at the airport, and went shopping for them – all while helping them become millionaires, and we received nothing for our efforts!” Schultz did not respond to a Wednesday request for comment; other than his initial e-mail, none of the hosts targeted by WGA-E have responded to repeated inquiries.

Asked whether his union was also seeking the support of MSNBC hosts in its feud with NBC, NABET’s Ross took a different tack. “I don’t know if they’re going to do that. Even though they are very outspoken, I don’t think they are going to be sitting there, being outspoken with NBC,” he told Salon. “I mean, any time there’s any kind of labor dispute, especially with television -- you know, one station on strike in Los Angeles, for example -- you don’t have other stations covering our strike. It just doesn’t happen.”