What happens when you google the word "eviction"?

Is capitalism evil? Ask the San Francisco teacher evicted from her Mission apartment by a Google employee 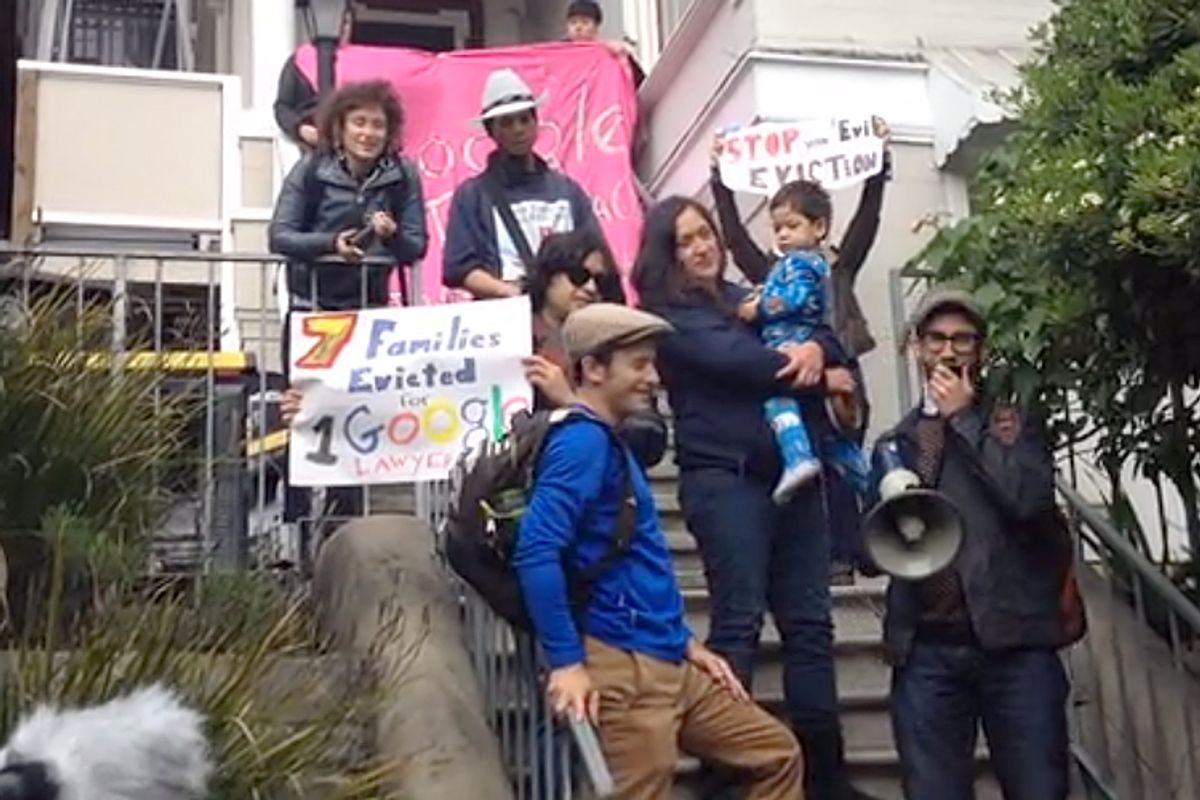 Is it "evil" when a wealthy Google lawyer buys a seven-unit apartment building in San Francisco's Mission District, and then proceeds to evict all the existing renters, including at least one San Francisco elementary school teacher? The answer to that question probably depends on whether you think the normal practice of capitalism is evil, or just, well, normal.

Friday marks the third time in the last three months that protesters against tech-economy driven gentrification have targeted individual Google employees at their homes. Whatever one might think of that tactic, it's hard to argue with the made-for-YouTube poignancy of this particular action. We don't know exactly what Jack Halprin plans to do with his Dolores Avenue mansion, but the optics of this mess aren't good. Evicting public school teachers from their apartments never looks good. If, as Halprin appeared to suggest to Mission Local he might end up simply occupying the entire building himself, well, that looks outright terrible.

For the activists, Jack Halprin connects all the dots. Google to evictions to San Francisco housing crisis to runaway gentrification. See what the tech economy has wrought! But there's nothing intrinsically technological about what Halprin is doing. This is what rich people do -- whether they've made their money from oil or steel or railroads or high frequency trading. They build or buy themselves mansions in nice places. San Francisco's traditionally strong left-wing politics mean there will be more squealing and more resistance when rich people do what rich people are wont to do, but it doesn't make what's happening in any way unusual.

Except for the rhetoric. Any reasonably vigorous defender of capitalism will tell you that free markets and self-interested entrepreneurs are supposed to guarantee more prosperity and abundance than any other system of economic organization so far invented. But Silicon Valley's strain of capitalist rhetoric takes this notion to peculiar extremes. If we've heard it once, we've heard it a million times before, this smart-watch fitness-tracker note-organizing app is going change the world for the better.

Google itself added some extra zest to the Valley's long-standing penchant for self-puffery with its declaration in its IPO prospectus that the company would guide itself according to a "don’t be evil" credo. I always understood this to mean that Google would eschew acting like Microsoft, constantly abusing its monopoly power to crush competitors and forcibly extract wealth from consumers, and not necessarily to mean "don't evict public school teachers from their San Francisco homes." It was "don't be evil" as business tactic, not "don't be evil" as in "we intend to act like Boddhisattvas leading humanity to nirvana." But whatever the intentions originally were, the reality is that Google's wealth appears to be resulting in the eviction of teachers from the Mission. It might be legal; and it might not even be technically "evil." But it definitely sucks.