Stop twisting the Bible: There is no message against same-sex marriage

Moses and Paul are being misinterpreted: They were against gang rape and pederasty, not loving relationships 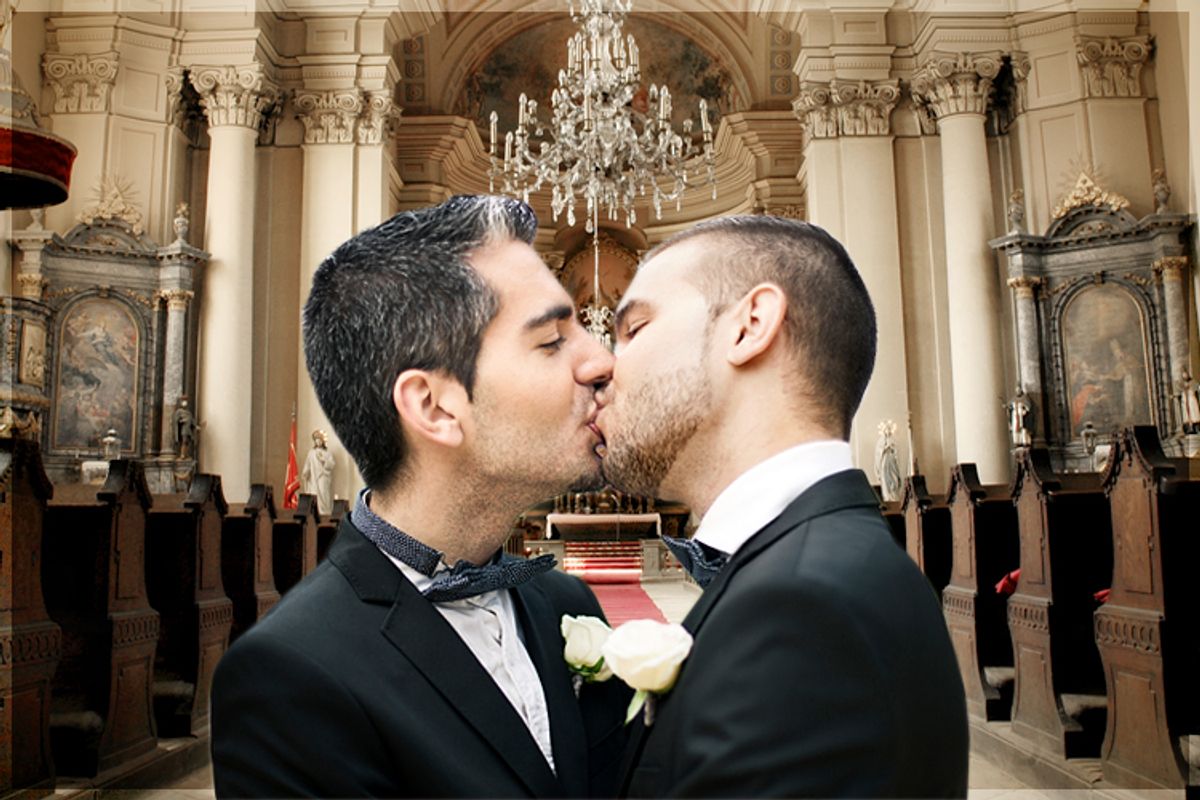 Excerpted from "Making Sense of the Bible"

I’d like to begin our conversation about homosexuality and the Bible by inviting you to think with me about what precisely Moses had in mind when he commanded that a man who “lies with a man as with a woman” must be put to death.

There is no record in the Torah of two men seeking to share their lives together as companions and lovers. There are two instances in the Torah of men lying with men as with a woman. It seems likely to me that when Moses commands the death penalty for a man lying with a man that he was addressing these practices that are described in two separate passages in the Torah. Let’s consider each of these two passages.

In Genesis 19, we read the story of Sodom, from which the terms “sodomy” and “sodomite” are drawn. In this story, two angels (in both Hebrew and Greek the word “angel” means “messenger”) came from God, and visited the town of Sodom. Lot, Abraham’s nephew, invited the men to lodge with him for the night. Here’s what Genesis says: “Before they had gone to bed, all the men from every part of the city of Sodom—both young and old—surrounded the house. They called to Lot, ‘Where are the men who came to you tonight? Bring them out to us so that we can have sex with them.’ Lot went outside to meet them and shut the door behind him and said, ‘No, my friends. Don’t do this wicked thing. Look, I have two daughters who have never slept with a man. Let me bring them out to you, and you can do what you like with them. But don’t do anything to these men, for they have come under the protection of my roof ’ ” (Genesis 19:4–8, niv).

Once again we see the strange patriarchal world in which the Bible was shaped, as Lot offers his two daughters to be raped by the men of Sodom rather than giving up the strangers he’s just met (a story virtually identical to the one that occurs in Judges 19 with the Levite’s concubine and the men of Gibeah).

But here’s the question I would ask related to this story: is this story really about loving, committed homosexual relationships? Had the town’s men gang-raped Lot’s daughters, would this story be about loving, committed heterosexual relationships? Of course not. Did the men of Sodom consider themselves homosexual? All of them? Or was their attack upon these strangers a way of demonstrating power over them, humiliating them, while violently gratifying their own sexual desires?

I’m reminded of the story of Scott Howard, who was repeatedly raped by members of a prison gang called 211 Crew while serving time in the Colorado Department of Corrections. The 211 Crew was known for a vocal hatred of homosexuals. Yet they raped men in prison suspected of being gay. Rape was a means of demonstrating power over others. What relationship does this kind of gang-rape have to loving, committed relationships between two people of the same sex? None that I can see.

Centuries later, God would say through the prophet Ezekiel, “This was the guilt of your sister Sodom: she and her daughters had pride, excess of food, and prosperous ease, but did not aid the poor and needy. They were haughty, and did abominable things before me; therefore I removed them when I saw it.” Among the abominable things they did was to attempt to gang-rape two strangers who had come to town, in addition to having pride, hoarding food, and not aiding the poor and needy.

It is worth noting that the story of the attempted gang rape in Sodom is the only example of same-sex sexual activity in the Torah up to this point. Could this have been the backdrop to Leviticus 18:22 and 20:1? Given that this is the only occurrence of a “man lying with a man” is it at least possible that Leviticus 18:22 and 20:13 were condemning homosexual rape rather than anything approximating two people sharing their lives in a loving relationship?

It is also possible that Moses was condemning the pagan use of “sacred” or temple prostitution in Leviticus 18:22 and 20:13. Deuteronomy 23:17–18 says, “None of the daughters of Israel shall be a temple prostitute; none of the sons of Israel shall be a temple prostitute. You shall not bring the fee of a prostitute or the wages of a male prostitute into the house of the Lord your God in payment for any vow, for both of these are abhorrent to the Lord your God.” We know little about this practice, but it appears to either have been some kind of fertility ritual or sex for pay with the payment going to support the temple of the pagan deity for which the prostitute worked. If this was the model for sex between men, then Moses’s commands in Leviticus 18 and 20 may have been prohibiting Israelite men from visiting pagan male temple prostitutes and thus practicing idolatry. Once again, this practice was a far cry from two people of the same gender sharing their lives together.

There’s another possible way of understanding the thinking behind Leviticus 18:22 and 20:13. The Torah classifies a variety of things as natural and unnatural, normal and abnormal. Natural is normative and, by virtue of its normative status, “clean.” What is not “normal” is “unclean.” Other words used in place of “unclean” in the Old Testament are detestable, or a practice, act, or animal might be considered an “abomination.” Homosexuality did not conform to the norm for sexual relations, and hence it was unnatural, unclean, detestable, or an abomination.

There are a host of things described by the Law of Moses as unclean or an abomination that we would not consider unclean or abnormal today. Eating pork, or rabbit, or any seafood that does not have scales (lobster, crab, clams) was detestable and an abomination. Yet we don’t consider eating these things an abomination today, nor a violation of God’s will. Is it possible that the backdrop for Moses’s condemnation of a man lying with a man as with a woman was this sense that something was either clean or unclean, acceptable or detestable based upon whether it was “normal” (i.e. conforming to the norm) or abnormal?

My point in all of this is that we too quickly assume we know what Moses was condemning, but if we look at the only two examples in the Torah of men lying with men as with women—gang rape and temple prostitution—we find practices that have virtually nothing to do with two people sharing their lives in a loving, committed relationship. Likewise, Moses’s way of determining that some things were abnormal, therefore unclean, therefore off limits, therefore an abomination is not how we determine what is acceptable or detestable today.

When Paul takes up the issue of same-sex relationships in Romans, he seems to have in mind at least two of the three ideas I’ve just described from the Old Testament: ritual sexual encounters tied to pagan worship/idolatry and the idea that what was natural or normative was clean, and what was not natural was unclean and sinful. We see this in the way Paul contrasts natural versus unnatural in Romans 1:26–27, “Their women exchanged natural intercourse for unnatural, and in the same way also the men, giving up natural intercourse with women, were consumed with passion for one another.” We hear echoes of the Old Testament view of clean and unclean, natural and unnatural, acceptable or detestable. Likewise these verses describing same-gender sex are set in the context of Paul’s condemnation of idolatry (see 1:25). It has been thought by many that Paul was describing, as Moses may have been, ritual prostitution practiced in some of the pagan temples. One final same-gender practice that might have been behind Paul’s condemnation of same-gender relationships in Romans 1 was pederasty. This was the practice of mature men taking on pubescent boys as students and lovers, a practice we would still condemn today.

Again what I am hoping to demonstrate is that we might explain the condemnations related to same-sex intimacy in the Bible as pertaining to these kinds of situations: gang-rape, temple prostitution, idolatry, and pederasty. If this is what the scripture writers were condemning, I suspect most of us would agree with their condemnations of these practices. But these practices, and the motivations behind them, are very different from two people sharing their lives together in a covenant relationship.

In the rest of this chapter, I’m going to offer an alternative approach for making sense of the biblical condemnations of same-sex relationships. I’d like to suggest that the handful of verses in Moses and Paul may be similar to other verses in their writings that seem out of sync with God’s will as we understand it today, verses that condone violence, accept slavery, or subordinate women.

Before considering this last point, I want to say a word about Jesus. Some are quick to point out that while Jesus never addresses homosexual relationships, he does describe heterosexual marriage as God’s will. That is true, but the context of these passages is never in reference to loving same-sex relationships. The context of his reference to heterosexual relationships is, if I remember correctly, always about divorce. I don’t think we can take Jesus’s silence on this issue as approval of same-gender relationships. But it is important, given that Jesus is God’s definitive Word by which all other words about God are judged, that he does not speak to this issue at all.

That, for me, leaves open the possibility that Moses and Paul did not accurately capture God’s will concerning same-sex relationships.

I have suggested above that the handful of passages in the Bible that seem to speak directly to a prohibition against same-sex marriage and companionship could be prohibitions against something entirely different from what we mean today when we talk about two people sharing their lives as loving companions. But even if they are directly condemning same-sex relationships, we’ve seen already that not everything explicitly taught in scripture captures God’s timeless will. Some scriptures seem clearly shaped by the cultural norms and the theological and social presuppositions of their authors. They do not seem to reflect the heart of God revealed in Jesus Christ. We have seen that the New Testament church took the bold step of acknowledging that much in the Old Testament did not reflect God’s continuing will for his people, setting aside circumcision, kosher laws, and much more.

Excerpted from "Making Sense of the Bible" by Adam Hamilton, reprinted with permission by HarperOne, an imprint of HarperCollins Publishers. Copyright © 2014. All rights reserved.