You're the kids who robbed us: Our strange online encounter with our burglars

I wasn't bothered by the break-in — until we got our PlayStation back, and watched our burglars' Vines and videos 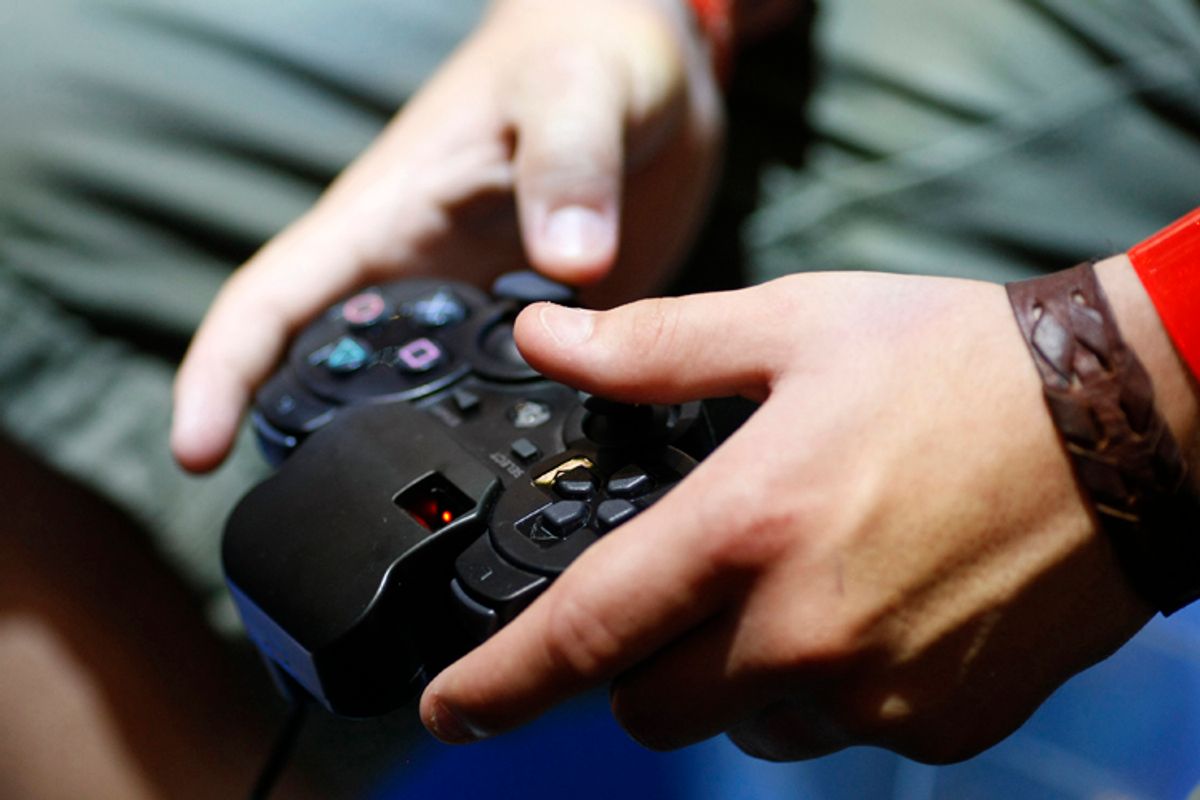 When the calls came, we didn’t receive them. We were 800 miles from home, at a friend’s place too deep in the Vermont woods for cell reception. It wasn’t until the drive back into civilization the following morning that the voice mails chirped into view on my phone. “What is it?” my husband Todd asked, watching my face as I listened to the messages from our neighbor.

“The house got robbed,” I said, although it was the wrong word. There’d been no force involved, just a sliced-through screen, the back window pried open or carelessly left unlocked. We’d been burglarized, burgled, a cheerful, gurgling word like a cartoon character had snuck in to eat Cheetos and watch cable. Our house too, the neighbors’ message said. They couldn’t tell us what was missing, what the inside of our house looked like.

That would have to wait until we flew back the following morning, a day’s worth of visiting writer events ahead of us. We answered the students’ questions about character development and symbolism, while imagining our house ransacked, stripped of valuables. We talked about stories and poems. We tried to mentally list what valuables we owned — not many. Then we pictured our home vandalized out of anger at the lack of valuables.

By the time we got home, we’d had so much time to brace ourselves for the worst that we were giddy at the truth. It took us a moment to notice anything missing at all. A PlayStation 3 game system, a handful of games. A box of keepsakes had been opened and left on the bed, only some cash removed, while a grandfather’s gold ring and some childhood drawings were left safely inside. Our outdated electronics had been perused and rejected. I felt almost sheepish calling the police to complete the report, thinking guiltily of our neighbors’ missing computer. The detective refrained from commenting on our good luck, maintaining a distant, professional sympathy. He also refrained from offering any false hope about recovering our possessions — we almost certainly wouldn’t.

“The PlayStation 4 is coming out in a few weeks,” Todd noted, looking on the bright side. “Now I don’t have to convince you that we should get one.”

I’d never even used the old system to play games, just to watch movies. Todd thought to check our Netflix account. Someone, at that moment, was watching "Courage the Cowardly Dog." He called the detective back.

For weeks, we didn’t hear anything more. The slashed screen stayed in the back window, the frame too warped by the bodies that had come through it to be easily pried out. We left it, like we left the black smudges on the back door where the police had dusted unsuccessfully for fingerprints. The edges of the screen flapped in the wind, the movement tugging at our peripheral vision, a constant false alarm. The horizontal cut sagged like a smile, and we thought it might serve as a charm against being broken into again: potential thieves could come and see that somebody had been here before them.

I did not feel particularly violated. The theft had been precise, surgical, about gain and not destruction. Strangers had walked through our rooms, but taken nothing we could not afford to lose.

Then the detective called. They’d recovered our PlayStation, and our games. Would we like to pick them up? It was a group of “known juveniles,” the detective said, tracked through the IP address with which they’d accessed our Netflix account. Another computer had been recovered, but not our neighbors’. There was no way to prove the juveniles had been the ones to actually commit the burglaries, so the charge was to be possession of stolen goods. The detective’s tone sounded like this was just one more chapter of a longer, not particularly interesting story, a low-stakes cat-and-mouse game between the police and the known juveniles.

When I showed up at the station, the man at the desk unceremoniously produced the PlayStation, a heavy wad of tangled cords attached. “Do you need a bag?” he said, his tone implying that I shouldn’t. When I said I could use one, he left to scrounge a brown paper grocery bag from the warren of offices behind him. When I returned home with the bag, Todd sorted through it. Half of the games had never belonged to us in the first place, and we now owned an Xbox adapter without ever having owned an Xbox. We’d come out of the burglary with more stuff than we’d started with.

We realized just how much more when Todd got the PlayStation back up and running, and the menu floated into view. Select User, it suggested: Was this Lilshooter104, Guccci, SosaBaby, or Highlife? In the avatar photos appeared four faces we’d never seen before. But they’d likely been in our house.

Todd shuddered, started deleting their music. “Stop,” I told him, when I realized what he was doing. These people’s footsteps in our house hadn’t rattled him, but their faces here, in this virtual space, felt like a violation. To me, it felt like a strange sort of communion. Hello, I thought, looking at them. Hello, Highlife. So you like Lil Wayne?

The longest upload was a homemade music video, the shortest a six-second clip of a high school kid getting pushed up against a locker, laughing it off. In one video, an off-screen voice tells a little girl in a red tank top to “Say hey, Vine.” The little girl purses her lips, says “Hey.” A toddler comes lurching in from the right side of the screen, brandishing a bottle. “Fuck Vine, bitch,” the toddler says, and everyone laughs.

A guy in a white wifebeater, his face filling the screen, holds a gun alongside his head. “Bang bang,” he says, tapping the side of the gun to his temple. Then he points it into the camera, at the viewer. Then the clip ends.

A girl, maybe 13 years old, the camera so close to her face it’s nearly pointed up her nose. She sounds like she’s been crying. “You fake as hell,” she says, “like ever since that day in the park, man, I haven’t heard from you.” “Change that shit,” she says, listing off just how fake this boy is. Then she pauses. “But oh yeah, but I forgot. You’re cool, cute smile, dress nice. Yeah.”

Another girl reads from prepared notes: “Shout out to Kenley, my baby sister. To Lauren, my fucking everything.” A shout out to Brianna: “I don’t really know you for real, but you seem cool.” She says exactly this three times, to three different people. She recites her list, eyes down, paper in her lap, until her friends cut her off. “I’m not done,” she says, scowling into the camera as someone shuts it off.

There’s only one video taken outdoors, broad daylight, a group of teenage boys gathered at an intersection filming each other with their cameras. The sky is gray and they’re dressed for fall in hoodies and jeans, but the grass is still a vivid green. A train horn sounds in the background, insistent and very close. “Not yet not yet,” someone says.

The train is bright yellow and orange, streaking across the frame. Someone must say now, but it isn’t audible. The camera never stops filming, the cameraman grabbing the train one-handed, whipping around to capture his friends who are screaming with victory and disbelief. If they’ve done this before, it hasn’t been so often that they’ve lost the surprise, the triumphant pleasure of it. Sky slides by over the yellow train, green grass and ornate brick buildings. For a few seconds, the video looks like a travelogue, like the Grand Rapids Chamber of Commerce could have paid them to film it.

“Not now!” someone shouts.

And he does, urgently shouts “Get off! Right now!” as the train crosses another intersection, and the boys drop obediently off the car, rolling down an embankment. They pop up immediately, unhurt and giddy with success, laughing like little kids, or maybe like anyone who has jumped off a train unscathed. I haven’t seen these streets from this angle, but I recognize roughly where they are. Our city isn’t that large. So that’s the best place to hop a train here, I think. “I wanna get back on! I wanna get back on!” they shout. Their joy is infectious. Me too, I think.

I wonder if they were that excited to jump out of our house, landing in the hostas. I wonder who held the PlayStation, if it was the cameraman from the train, graceful enough to balance one-handed. I wonder if they ever filmed a burglary; surely they wouldn’t be dumb enough to film criminal activity, I think, but then they filmed themselves hopping a moving freight train. They watched "Courage the Cowardly Dog" still logged in to our account. If, that is, the thieves and the boys on the train are even the same people.

Todd finally muscles the cut screen out of the window frame, but the snow has come now in earnest, and it’s no fun to linger outside, trying to crumple the screen small enough to fit our trash can. Our city shivers, buried under dirty snow and veined with bare, dark trees. I think of the yellow train, that green, green grass, the boys in bright hoodies rolling across it. I imagine we are all waiting for spring.

It’s not that I want them to come back. It’s not that I want to confront them. But in the end, they took nothing we needed. We are people who own things we do not need. Those things were returned to us anyway. Returned to us with interest, with these accidental hellos, greetings from the neighbors we knew were there, but never met. How strange, and how impossibly lucky. And when, and how, might that luck finally run out?

For now, Todd props the screen in the basement with the holiday decorations, one more seasonal artifact. I tell him to go ahead and wipe the game system, delete the music and the videos. I tell him to try to put back whatever used to be there.

Caitlin Horrocks is the author of the story collection "This Is Not Your City" (Sarabande). Her fiction has been published by the New Yorker and in the 2011 edition of Best American Short Stories.