I can't bear to watch my mom detox

My mother won't admit she has an opiate addiction. As a junkie for 18 years, I know her behavior all too well 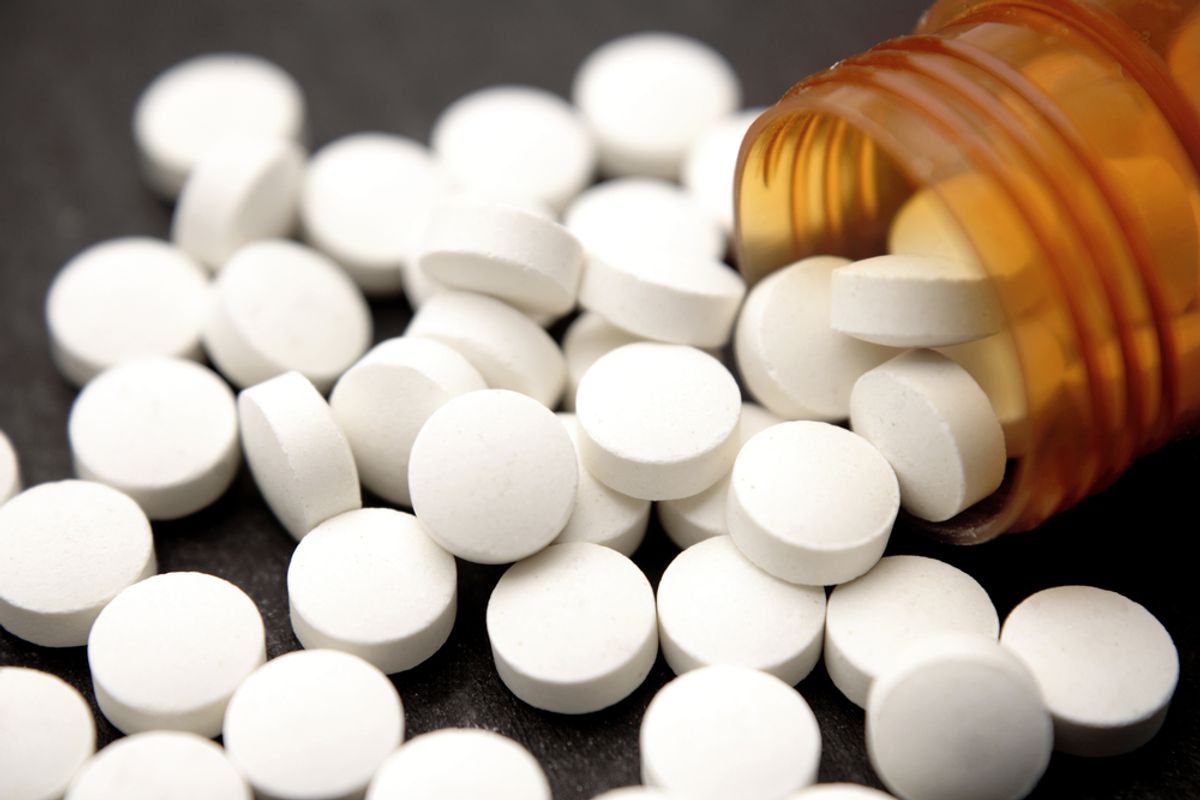 I’m standing at the foot of the bed, watching my mom as she twitches, the withdrawal creeping in while she sleeps. We’re in the hospital. She’s just had hip replacement surgery. Her recovery’s been a little tense and she’s not herself: she’s acting like a spoiled child, refusing to eat, talking nonsense and demanding to go home.

It’s a little unnerving watching my mother be so incoherent and belligerent. I’m worried this could be permanent. But the doctors think it’s the drugs they’ve administered: Morphine and Fentanyl for surgery and a shot of Dilaudid in the recovery ward. Whenever she wakes, she says she’s in pain. The nurse hands her a pill or fills the IV. My mom’s getting loopier, a pain med combo-platter reservoir forming in her system and flooding her brain.

Add all that to the fact my mother has a dependency on opiates, which the doctors are also worried about, and it gets even more complex. Now they’re asking why a 79-year-old has been heavily prescribed Vicodin for the past seven years. Their questions are accusatory, as if I’m somehow to blame. And all I can say is, “She’s your patient, don’t you know?”

Her surgeon, primary doctor, nurse and physical therapist are huddled in the hallway; talking in hushed tones, they’re contemplating detoxing her while she recuperates.

A doctor I’ve never met takes me aside and explains the process, how the patient will appear to be suffering but it’s for her own good.

I look at her skeptically. “So you’re going to detox my mom in the middle of her recovering from one of her most painful surgeries ever, because you’re having a knee-jerk reaction to your HMO being at fault for keeping her addicted?”

“It’s a little more complicated than that,” replies the doctor.

“Well, try and explain it then,” I say. “Because it looks exactly like that to me.”

The doctor launches into a lecture on opiate addiction and how it affects the body and nervous system. She needn’t bother; as a recovering heroin addict, I probably know a lot more about the subject than she does. I shot heroin for 18 years. I’ve experienced withdrawal hundreds of times, sometimes even willingly, and I know a twitching junkie when I see one. And yes, they could detox my mother, she’d experience a lot of pain, the doctors would somehow think they’ve reset a wrong and maybe she’d roll out of the hospital drug-free. But I also know there are at least 200 Vicodins stashed at her home. So really, what’s the point?

“Yes,” says the doctor. She wears an expression that implies she thinks I’m a tad dense but finally grasping the situation.

“Why not give her some pain medication so she isn’t in pain and then when she’s not in pain, like after she’s healed from surgery, address the issue of your HMO totally fucking up and keeping her on Vicodin for the last seven years?”

When I was growing up, my mom never had an obvious substance abuse problem. Even though her father was an alcoholic and addiction is thought to be hereditary, she never exhibited any outright addictive behaviors. And until recently, she hadn’t displayed the sort of desire to overmedicate that I had. Only with age, her retiring, my stepfather dying and close friends passing, she’d lost interest in life. These days she sits at home, alone. Her health, having never been great, is deteriorating even more. When her knee went out, she had it replaced and the doctor prescribed Vicodin. And suddenly, the same monster that lives in me was awakened in my mom and she took to them like they were the solution to all her problems.

Ask any addict why they started using and they’ll answer that in the beginning, the drugs worked. They did what we wanted them to do. And I’m sure for my mom, they stopped her brain from obsessing on all the bullshit our brains obsess on. She didn’t feel quite as old, she could get around easier and the pang of loneliness didn’t cut so deep into her soul.

When I found heroin, my life changed. I’d always been socially awkward and painfully introverted and the challenge of fitting in was terrifying. When I shot heroin, I didn’t even consider any of that. I went about life as if I did fit in, like I was equal to those around me—an idea that, pre-drugs I couldn’t have fathomed. In the beginning, it all seemed almost magical. I felt as if I’d found that missing link to life. Then reality hit. I was addicted but still kept at it, shooting dope every day. And as the other parts of my life suffered, I kept going deeper into addiction until it was all I cared about—forsaking family, friends, jobs, career and finally life itself. I went from being an art school graduate with a promising career in the music industry to a full-fledged junkie pulling armed robberies and running the streets.

Of course, my mom’s decline hasn’t been so dramatic. She’s still a solid citizen, crime free and un-incarcerated. The changes that have occurred are much more subtle. She’s quick to anger and often experiences depression, anxiety and paranoia. And then there’s every drug addict’s nightmare: that good high she experienced at the beginning that made everything okay has become much more elusive. With increased tolerance to the drug, she’s had to up her dose and that in turn requires her to hustle her doctors for more. Her entire focus has become the drug and everything else around her has fallen by the wayside as she isolates.

The doctors are still huddled in the hallway and every once in a while one will steal a glance my way as they continue to whisper amongst themselves. My mom opens her eyes and groggily looks at me. There’s no recognition.

I can remember saying the exact same words to my mother 17 years ago. I was in county jail, locked up awaiting trial, charged with multiple counts of armed robbery. Visiting was on the weekends and like clockwork, my mother showed up every Saturday morning with the other mothers, wives and girlfriends and subjected herself to the intrusive body searches and abusive attitudes of the deputies.

“How you holding up?” she would ask.

Except I had no home to go to. My mom’s visits shoved that reality in my face. I dreaded the weekends but how could I tell my own mother that just seeing her reminded me of freedom and when she left I would go back to the cell block, to a cell I share with an alleged triple murderer, and hopelessly await my fate?

I’m staring at my mom as she repeats, “I want to go home.”

Deep down, I’m resentful of my mother and I’m not really sure or able to touch on why. Am I mad because I want her to live a better life, am I pissed that she can use drugs and I can’t or is it a little more complex than all that? I would like it if she’d get off the drugs, straighten up and take care of herself but she and I have discussed this and right now that’s not going to happen. Being intensely secretive and closed off, she’s not going to admit she has a problem or ask for help and a 30-day detox at a rehab or even attending a 12-step meeting are also out of the question. Besides, like many who abuse prescribed medication, she feels justified because she’s only taking what the doctor gave her.

The doctor is back and willing to give my mom a Darvon if she’s in pain. And I understand that she means for my mom’s withdrawal. The doctor asks: on scale one to 10, 10 being the worst, what kind of pain is my mom experiencing?

“Can’t really tell what I feel any more,” says my mom.

And I’m thinking, Mom what the fuck, can’t you just say 10 and get this over with? And there I am going against everything I’ve ever learned in recovery, mentally coaching my mom to score drugs in a hospital.

“Why don’t you take this pill?” asks the doctor and leaves without saying another word.

My mom swallows the Darvon and looks up at me. “I want to go home,” she says and closes her eyes.

I watch as an involuntary shudder pass through her body. I can’t make my mom kick drugs. I could leave her here with the doctors and let them sort it out. But then what am I going to do? I live 500 miles away. I can’t watch over her; but when the addict won’t even admit they’ve a problem, what can you do?

Twenty minutes later, the twitching stops, her breathing becomes calm and the sheen of sweat is gone from her forehead. I’m pretty sure my mom will sleep for the next few hours and when she awakes if she’s in pain or withdrawal, they’ll give her another Darvon to make it through the night.

In the morning, I’ll be here.