My life as a Cleveland Indian: The enduring disgrace of racist sports mascots 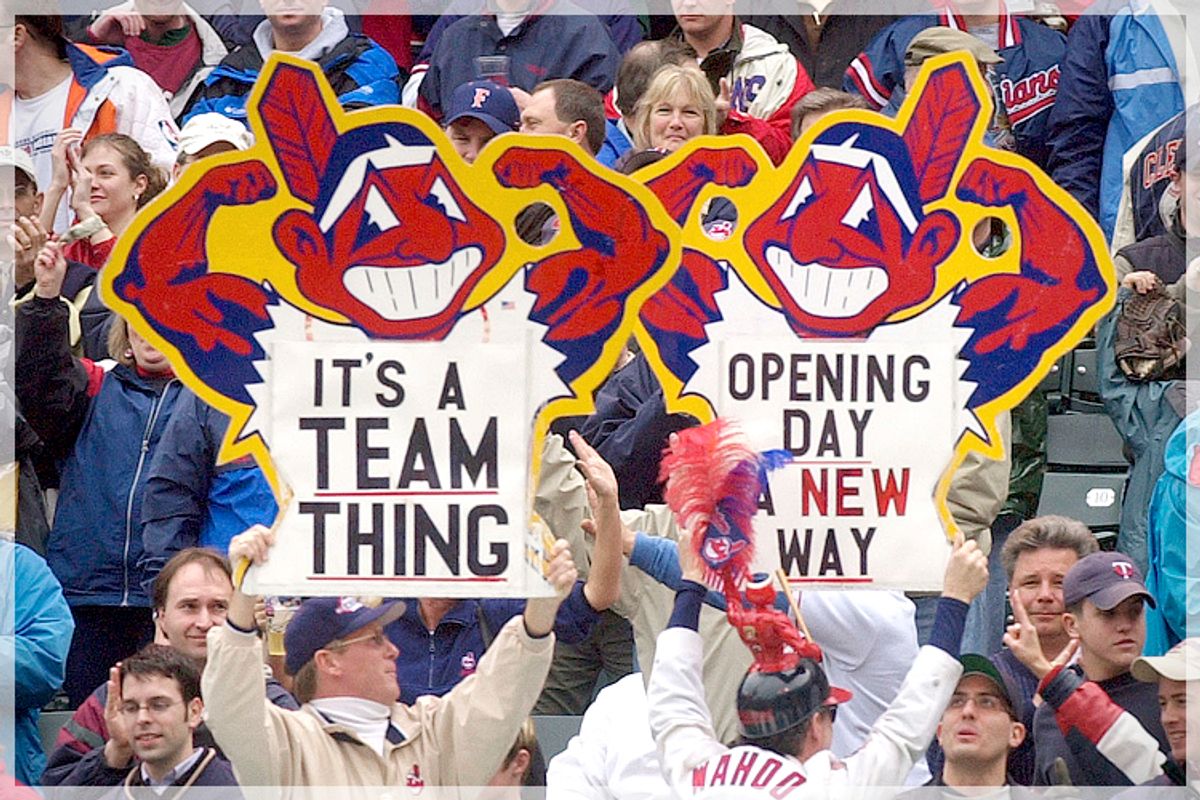 I am a Cleveland Indian.

No — I’m not referring to that grotesque caricature, “Chief Wahoo,” the Cleveland Indians baseball team uses as its mascot. What I mean is that I was born in Cleveland — a child of U.S. Relocation and Termination policies meant to make native American tribes disappear. The purported goal of these Termination-era congressional laws and resolutions was to “liberate Indians” from the wardship of the U.S. government. But what they did, in fact, was eliminate tribes’ federally recognized status, sovereignty, and force the sell-off of tribal assets and land. These policies also led to the loss of a generation of young people to urban centers — many of whom, like my parents, never returned home.

A recent tweet by a Cleveland blog called “Cleveland Frowns” went viral and made me think again of what it means to be a “Cleveland Indian.” The tweet featured a photo of a Cleveland Indians baseball fan, Pedro Rodriguez, his face painted red like Chief Wahoo, wearing a cheap, feathered headdress. He is, in this clownish approximation of an American Indian, attempting to speak to an actual American Indian, Robert Roche, a Chiricahua Apache and executive director of the American Indian Education Center in Cleveland. The image was quickly paired with an eerily similar 2002 cartoon showing a fan in redface saying, “But I’m HONORING you dude!” to a Native American man. And in fact, Rodriguez's interaction with Roche apparently went much the same way. (Roche, a longtime leader in the Native American community and elder who has been protesting Chief Wahoo for 45 years, stated that he "did not feel honored" by the costume.)

The parallels between the cartoon and real life even led the cartoonist, Lalo Alcaraz, to wonder: “Am I a prophet? A time-traveling cartoonist?”

I am often ashamed of my birthplace, Cleveland, as -- let's face it -- its name does not connote class, progress, or future forward thinking, and instead recalls images of Lake Erie oil slicks burning smokily in Rust Belt despair. T.S. Eliot's "Wasteland" comes to mind. And despite Cleveland Indians fans' claims to "Cleveland Pride," it is difficult for me to call myself a "Cleveland Indian," when Chief Wahoo vies for the title as well. Seeing that image of Rodriguez in grotesque redface made me want to counter the stereotypes fueled by the mascot that still have such a strong hold on the minds of Clevelanders like him and to remind America what being a "Cleveland Indian" meant to my parents and their generation.

In the 1950s and ’60s, Cleveland was one of several “Relocation Centers” across the country set up by the Bureau of Indian Affairs to receive young Native people lured from their homelands with promises of a better life. This, of course, was in preparation for the be-all-and-end-all solution — termination and full assimilation — to the “Indian Problem” that had vexed Congress since the founding of the United States.

The Cleveland Plain Dealer trumpeted the news in a 1957 article stating, “Cleveland is going to get some new Indians, but this is no baseball story.” Some quotes from the article demonstrate the mind-set of the city about Native people:

By the 1960s, around the time my parents arrived, there were an estimated 9,000 Native Americans in the city from tribes all over the country. My parents were drawn there like many young people by promises of educational opportunities, job training and greater economic opportunity. They were lucky: They succeeded and went to college and were able to provide a better life for me. Most were not.

When my dad arrived in Cleveland, the BIA gave him a voucher to stay at a hotel. When he opened the door to his room, there was dried blood on the floor and on the door, and all night a drunk man kept him awake trying to break his door down trying to get in. My dad was a tough guy, a former high school football captain and soldier in the Army, but even for him it was an extremely unsettling experience. On advice from his Dakota Sioux — and Episcopalian — mother, he contacted the church. After enduring an awkward tea and interview about his prospects (he was attending engineering school) at the home of a wealthy, elderly Episcopal woman, he was given enough money to pay for better accommodations.

Others were not so lucky. As he was checking out of the hotel, my father saw a young Ojibway family entering the lobby. He tried to warn them about the place, but they could not speak English and did not comprehend what he was saying. In his 60s, he told me he was still haunted by the question of what became of them. He hoped they were able to go back to their reservation, because he never saw them again at community events.

To meet the needs of families that the Bureau of Indian Affairs could not (or would not) help with, urban Native communities across the country banded together and formed community centers to take care of their own. My mother, despite being a poor college student, saved her money and baked pies to raise money to help needy families in the community. She and her girlfriends intervened and got a Native student out of a rough school where he was being bullied and into another that was safer. Some of these community centers, like the Intertribal Friendship House in Oakland, Calif., still exist today. Others, like Cleveland’s American Indian Center, have not survived.

And then there was the American Indian Movement a civil rights organization patterned on the Black Panthers that formed in urban Native communities to provide protection to members who were often harassed by the police and were the frequent victims of violence. In Cleveland, the late Russell Means, the well-known Oglala Lakota activist and actor, organized a local AIM chapter. My father used his connections within the Episcopal church -- his family included a few well-known Dakota Sioux Episcopal priests -- to obtain a simple desk with a working telephone in the basement of the Episcopal church for Means to begin his work.

It was from such humble beginnings 45 years ago that Means began organizing the community to protest the Cleveland Indians baseball team. These protests continue to this day. Means is no longer with us -- he has “walked on,” as we say in Indian Country -- and my father also passed away this summer; yet here we are, still protesting. My children have joined the fray -- three generations and still waiting for Chief Wahoo to be put to rest.

Such caricaturing has been promoted by billion-dollar sports franchises that are broadcast nationally every weekend. Nike continues to manufacture and sell gear emblazoned with Chief Wahoo and the Washington football team's offensive mascot, or with slogans such as FSU’s “Fear the Spear” on them. In America, there is no other ethnic group so casually subjected to such treatment  -- we are repulsed as a society by black or Asian caricatures or stereotypes, but Native people are not regarded the same.

My parents first met at a University Circle diner that young Native college students frequented in Cleveland, a place affectionately called “the Greasy Spoon.” They enjoyed a long and happy marriage. Relocation brought them together and made me a Cleveland Indian. It is my hope that the sight of that fan “Playing Indian” and dressing in redface is enough to finally bring about the end of Chief Wahoo.

To this end, I helped start an organization called Eradicating Offensive Native Mascotry.  “Native Mascotry” is a term I coined to describe the acting out that occurs when fans play out their fantasies of being Indians. Because it’s not just the static image of the mascot that is the problem, be it stoic and noble or a horrific caricature with a feather on top. It is the license it confers others to act out dated stereotypes about us and ignore our real issues -- even our humanity. This is particularly noticeable when members of EONM challenge fans, who immediately go from saying, “But we are honoring you,” to, “You’re drunks and on welfare, you should be grateful we are doing this.”

Despite hundreds of years of Manifest Destiny in all its permutations, like Termination and Relocation we are still here. My mother’s tribe, the Navajo Nation, is the size of Ireland, and now has a population equal to that of Iceland. Our nations also control a great deal of the energy resources left within the United States. To obtain them, the U.S. government is going to have negotiate with us on a nation to nation basis. Yet, despite this, most Americans have only a hazy idea of Native Americans that revolves around stereotypes that mascots promote.

When I was about 11 years old, my mother told me a story about her first morning in Cleveland. She was 18 years old, a recent high school graduate from the Navajo Nation, and was staying with a white family who had once lived in her hometown on the reservation. On her first morning, she awoke disoriented and crying, absolutely convinced the sun had risen in the West, and despite the constant reassurances of her hosts that, in fact, the sun had risen in the East, she could not be convinced otherwise.

Even years later, I could tell she still felt guilt about moving outside of the Dinetah, her homeland where the ceremonies work to keep her as a Navajo woman in Hozho, harmony.  But she stayed and found a loving husband and made a good life for herself and her children and now, for her grandchildren. She would not want her grandchildren, all enrolled Navajo citizens, to be defined by the stereotypes promoted by Chief Wahoo. They deserve better. We all deserve better.