Did the Justice Department have other fish to fry -- or did it avoid a showdown for fear of backlash? 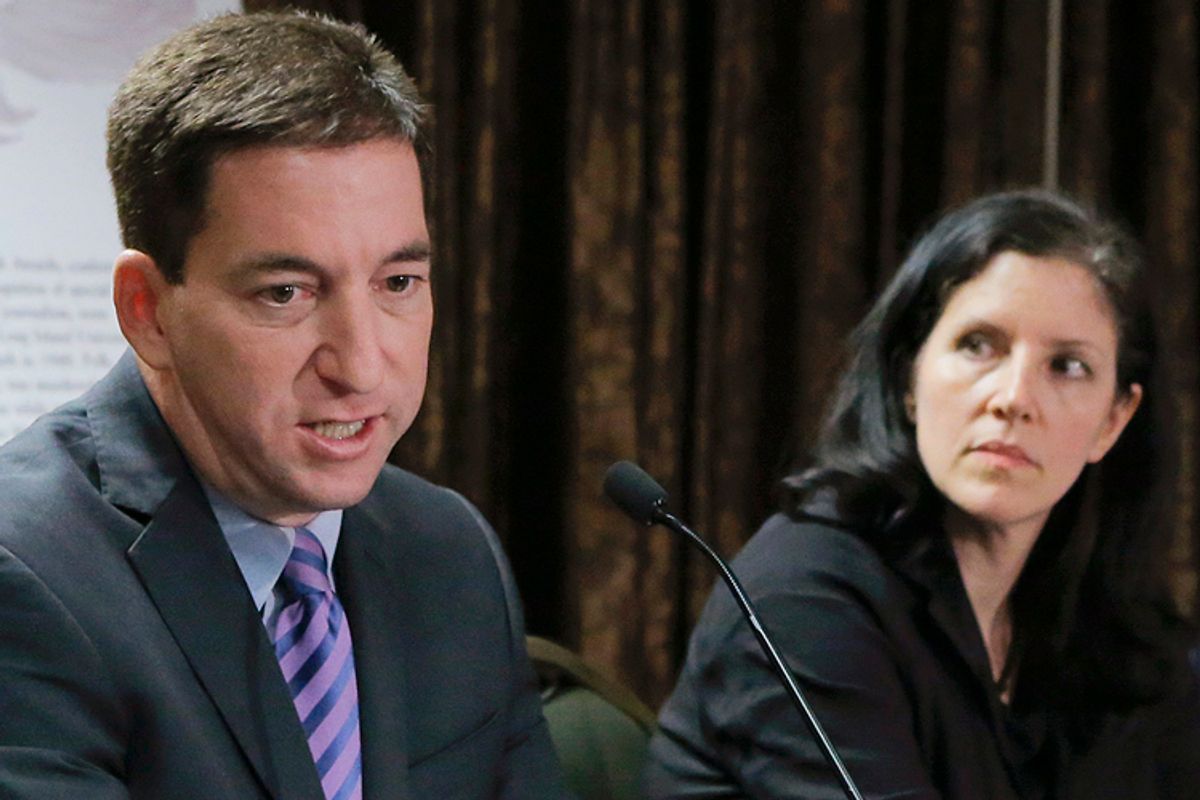 When the news broke in February that Glenn Greenwald and Laura Poitras were going to attempt to reenter the United States to accept a journalism award in person, the obvious question that loomed was whether they would be allowed to enter. Since last June, when the two journalists helped release classified documents obtained from the NSA through former contractor Edward Snowden, they have come under fire by top Obama administration officials, media celebrities and congressional officials alike. Rep. Mike Rogers, R-Mich., has argued that Greenwald’s publishing of NSA materials was a criminal activity while Rep. Peter King, R-N.Y., has repeatedly called for the arrest of Greenwald, even though a number of other journalists have helped to screen and release the documents obtained by Snowden.

Greenwald and Poitras had good reason to fear that they could be arrested. The State Department did move against Snowden by revoking his passport in an attempt to thwart his efforts to elude the long reach of the U.S., and it appeared to silently consent to the U.K.’s day-long interrogation of Greenwald’s partner, David Miranda, at Heathrow Airport as he tried to return to his home in Brazil, after relaying documents to Poitras, who lives effectively in exile in Germany.

But those threats only helped cement Greenwald’s resolve to reenter the United States. As Greenwald told former Salon reporter Brian Beutler, he would attempt to reenter, not only for personal reasons (such as wanting to visit his family), but also to force the issue based on the “fucking principle,” presumably of free speech and journalistic freedom.

Friday, 10 months after the revelations that Edward Snowden had left the United States with an enormous number of classified NSA documents, Greenwald and Poitras arrived unmolested as they reentered the U.S., where they are citizens. Greenwald has said that his legal counsel has attempted to gain assurances that the Department of Justice would not arrest him, but they remained silent.

So why weren’t Greenwald and Poitras arrested?

Some have speculated that there would be too much backlash against the Obama administration were they to attempt to indict Greenwald or Poitras, who has faced intensive hours-long interrogations when she has passed through the U.S. in the past. This is an election year in which the Democrats already face low voter interest from longtime party members and other political activists, indicating extreme alienation from the more liberal segments of their constituency.  There are many reasons for this alienation, some having to do with the shenanigans of various Obama administration officials, including the blatant deception of Director of National Intelligence James Clapper, who lied under oath in saying that Americans’ phones were not being wiretapped. The White House’s diminishing credibility in the face of the NSA scandal was not rescued in light of the pretext by the Obama administration to appoint a serious NSA oversight panel. As the Associated Press’ Stephen Braun reported last September, the members of the panel work in DNI offices, their statements are vetted through the DNI’s press office, and the transparency rule that is supposed to govern most federal committees has been suspended for them, thanks to the gracious intervention by Clapper himself.

The White House’s integrity was not enhanced in the slightest by its refusal to consider seriously the conclusion rendered by an independent watchdog group, the Privacy and Civil Liberties Oversight Board, namely that the NSA spying program was illegal. Stories continue to be churned out by Greenwald at the Intercept, the online magazine that he and Poitras founded through Internet billionaire Pierre Omidyar’s funding, and elsewhere by Barton Gellman, Ewan McAskill and others. As the public continues to hear new revelations about the U.S.’s surveillance activities, frustration surrounding the complicity of Democrats in not challenging the NSA’s scope or holding CIA and DNI officials to account could be expressed by significant losses of seats during the upcoming midterm elections.

Even if we were to concede, along with Reps. Rogers and King, that somehow the NSA reporting done by Greenwald and Poitras has “damaged” national security, there is the question of how much the Democrats’ own failures of integrity have worked heavily to damage the credibility of the United States. It is difficult to believe that the current administration — in its various offices — is at all interested in abiding by principles of free speech, due process and accountability of elected officials and appointees. Such claims are especially dubious when whistle-blowers such as Chelsea Manning and ex-CIA employee John Kiriakou are convicted for revealing wrongdoing by the U.S. military and the CIA, respectively. These convictions and condemnations by the White House, despite the notable absence of punishment faced by ex-CIA director Leon Panetta for leaking classified information to "Zero Dark Thirty’s" screenwriters. In the meantime, the dishonorable Clapper remains unpunished and openly smug about his official prevarications. The president’s only response to Clapper has been to gently admonish Clapper for carelessness rather than lying to the Senate.

Is there any credibility to the idea that the U.S. is a nation of laws and procedure, when the CIA itself faces accusations by Sen. Dianne Feinstein for hacking into Senate Intelligence Committee staff’s computers in order to eliminate all traces of congressional reports of illegal CIA torture activities that took place under the Bush administration? Do we call the administration’s actions abusive or merely autocratic when it refuses to publicly hold the CIA to account? How about when it refuses to call the Bush administration officials to account (“Look forward!”)?

Did the Department of Justice avoid a showdown with Greenwald and Poitras because of the fear of backlash from American citizens, or because it is too busy covering up wrongdoing on the part of the CIA, the NSA, the DNI -- not to mention Bush administration officials -- to worry about the reentry of two zealous investigative journalists? These are journalists, I might add, who have helped to focus the world’s attention on the collusion between the various high echelons of the U.S. government as its officers happily transgress the wide range of political protections on which American citizens, Democrats and Republicans alike, are supposed to be able to rely.