John Roberts didn't "save" Obamacare -- he gutted it

Time to stop saying he "upheld" healthcare reform. He could have killed it more, yes, but here's what he really did 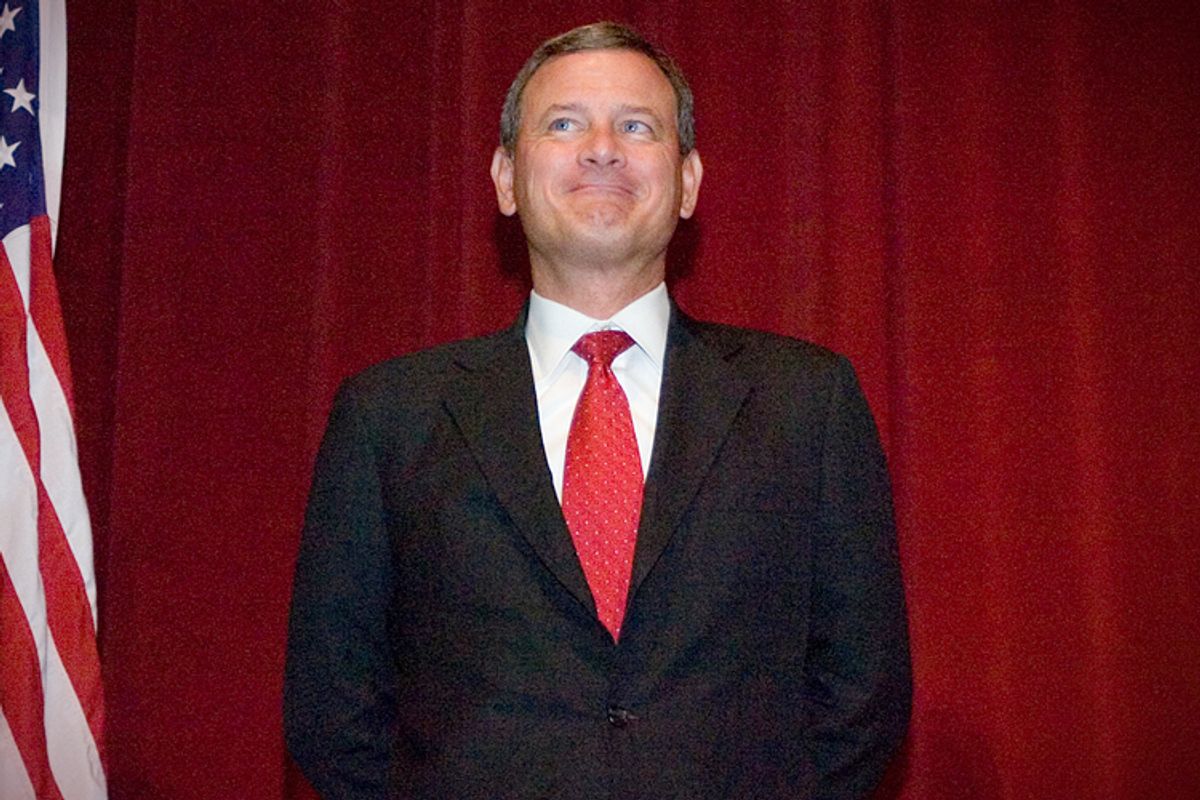 Nearly two years ago, by a 5-4 decision, the Supreme Court allegedly "upheld" Obamacare. More specifically, the thinking at the time went, it was Chief Justice John Roberts who, in a herculean act of statesmanship, cast the deciding vote to "uphold" Obamacare. Celebrations ensued among supporters of the law; President Obama himself delivered remarks saying, "the Supreme Court upheld the constitutionality of the Affordable Care Act."

John Roberts certainly could have done much more damage to the law, had he chosen to. He could have joined the four other conservatives on the bench who were prepared to take down not just the individual mandate, but the entire law itself. What a peach.

Still, as early estimates of the newly ensured under Obamacare's implementation are rolling in, it's time to write a second draft of history -- one that doesn't include anything about John Roberts "upholding" or "saving" Obamacare. Because that's an odd way to describe a decision that gutted the most effective part of the law.

While the White House was popping champagne over the survival of the law's requirement for individuals to obtain health coverage or suffer a tax penalty, Republican-held state governments were more focused on that "other" part of the majority decision: the one that allowed states to opt out of the law's Medicaid expansion and suffer no consequences to its pre-expansion Medicaid funding. The White House, at least publicly, blew this off. "Senior Obama administration officials downplayed the impact of the Medicaid portion of the court ruling, saying as a practical matter it is not particularly significant," the Wall Street Journal reported at the time. After all, the thinking went, what state would be crazy enough to turn down all this money -- an expansion that the federal government would fund 100 percent of in the beginning, and 90 percent of permanently?

Two years later, we have the answer: Many, many states would be precisely that crazy! Let's call it two dozen. The Kaiser Family Foundation breaks it down as 19 states "not moving forward at this time," while the issue is under "open debate" in five states. And it is definitely not certain that those "open debates" will produce Medicaid expansions.

When the law was crafted, it was estimated that the Medicaid expansion -- covering all those up to 133 percent of the federal poverty level -- would add 17 million to the rolls of the insured, comprising approximately half of the total. This was the law's broadest, bluntest instrument for reducing the uninsured, targeting those who needed relief the most: the poor.

And a number of estimates are coming in now confirming that Medicaid, not the individual exchanges, has been the more successful tool for bringing down the country's percentage of uninsured.

The Rand Corp.'s latest survey finds that the nation's uninsured rate dropped from 20.5 to 15.8 percent from September 2013 to mid-March 2014. And of those who were previously uninsured but are now insured, 3.6 million can be accredited to Medicaid, while 1.4 million found insurance through the exchanges.

The Urban Institute's survey -- which, like the Rand Corp.'s, does not cover the late-March surge in enrollment -- found that "5.4 million U.S. adults gained health insurance since September 2013," and had this to offer about Medicaid:

States that implemented the ACA's Medicaid expansion saw a larger decline: their uninsurance rates for adults dropped 4.0 percentage points since September, compared with a drop of 1.5 percentage points for the nonexpanding states. The average uninsurance rate for adults in the 24 nonexpanding states was 18.1 percent in March 2014, well above the 12.4 percent average in the expansion states.

(There is one caveat: "[T]he difference in coverage gains between the states that did and did not expand Medicaid should not be entirely attributed to that policy decision," the Urban Institute adds. "There were other policy choices that likely affected enrollment. For example, many of the nonexpansion states did not set up their own marketplaces and therefore did not get the same access to outreach and enrollment assistance funding." Nevertheless, even if the gap isn't "entirely" attributable to the Medicaid decision, it's certainly a hefty chunk of it.)

All this good news about the success of the Medicaid expansion for the states that did accept it only amplifies the damage done by the states that didn't -- again, a choice offered to them by the so-called heroic savior of Obamacare, Saint John Roberts.

Just how many are being left off the rolls thanks to Roberts' decision that "upheld Obamacare"? The Kaiser Family Foundation puts it at 5 million, in just the next year.

About 5 million people will be without health care next year that they would have gotten simply if they lived somewhere else in America.

The court effectively left it up to states to decide whether to open Medicaid, the federal-state program for the poor and disabled, to more people, primarily poor working adults without children.

Twenty-five states declined. That leaves 4.8 million people in those states without the health care coverage that their peers elsewhere are getting through the expansion of Medicaid, according to a Kaiser Family Foundation estimate. More than one-fifth of them live in Texas alone, Kaiser's analysis found.

The numbers so far make it clear that the Roberts court's decision to let states opt out of the Medicaid expansion -- Obamacare's single most effective tool for slashing away at the uninsurance rate -- has directly blocked many millions from access to health coverage.