My iconic nightmare: How I became the face of the Boston bombing

One year ago, Jeff Bauman lost both of his legs. But his story is one of resilience, not despair 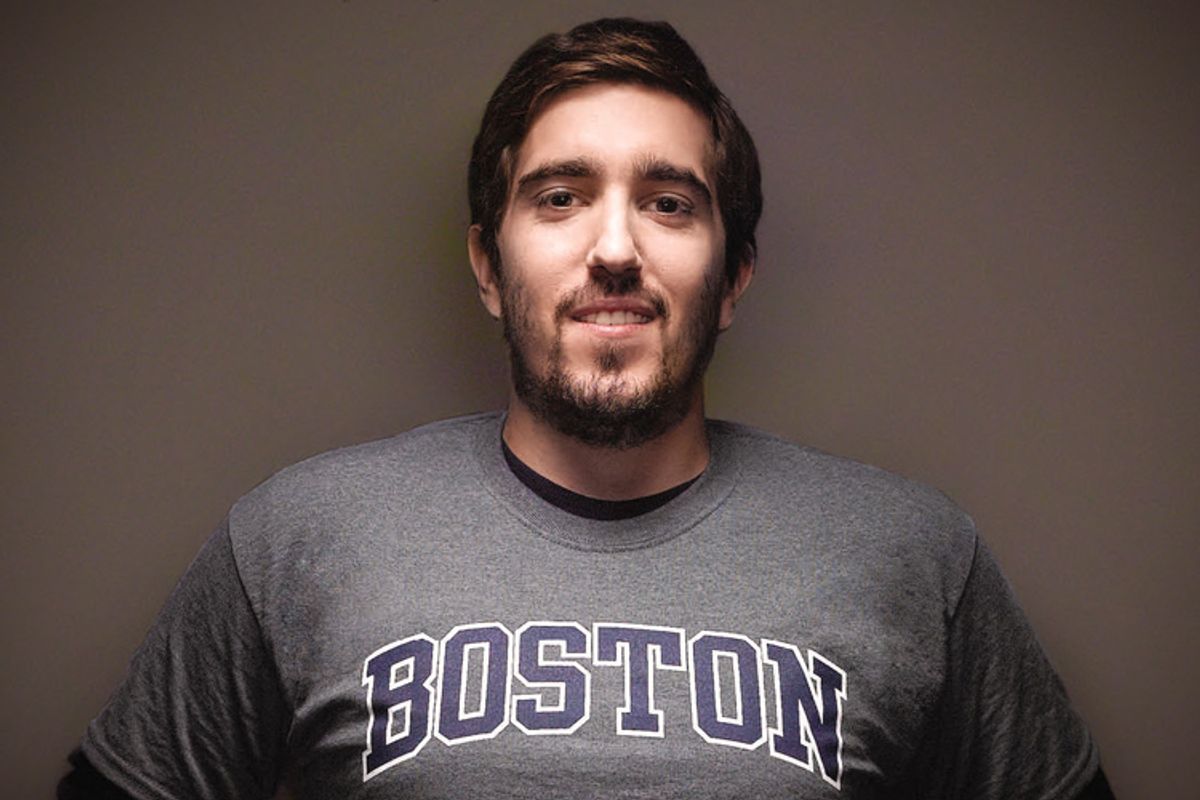 The bomb went off at 2:49 on Monday afternoon. Within seconds, the man in the cowboy hat was leaping the barricade guarding the finish line and racing toward the carnage. The second bomb went off when he was half-way across the street, but he kept coming. They all kept coming to help us: police officers, race volunteers, bystanders.

Strangers were huddled over victims on the ground, assuring them that it would be alright,  that help was on the way, that they weren’t alone. People were stripping off sweaters and belts for tourniquets. Some held wounds closed with their hands. The Boston bomb squad ripped into backpacks and packages with knives, a so-called “slash-and-tag.” They figured if two bombs, then probably three, to kill the people trying to help. That’s usually how terrorist attacks worked. A “slash-and-tag” on the third bomb would problem kill the bomb squad officer, but it would save other lives. At first, it was reported as an electrical fire, or maybe a sewer explosion. Manhole covers sometimes blew off without warning. But it didn’t take long for word of bombs to spread. Posts and tweets from the scene. Cellphone pictures of blood on the streets. Boston is a small town, about one-sixth the size of New York City. Within minutes, everyone was on social media, trying to find out if their friends were okay.

No one could reach me. Family and friends called and texted, but there was no answer. The bomb had either shattered my cell phone or sent it flying. I remember trying to find it when I was on the ground. I wanted to call Mom and tell her good-bye, don’t worry, I’m not suffering, I’m just going now. I had a good life.

But the phone was gone. I couldn’t reach anyone, and no one could reach me. Then they shut down the towers, and all the cell phones went dead.

The first pictures came out almost immediately thereafter. They were long-shots of the scene: the concussion of the bomb shaking a camera filming the race. The force of the blast knocking down a runner about to cross the finish line. The plume of smoke.

Then the first photo of a recognizable human face: my face. It was the now-famous photo of me in the wheelchair, with the man in the cowboy hat running beside me. Everyone calls it “iconic” now, but at the time it was horrifying. I have a cut above my eye, and one on my cheek. My face was pale and filthy from powder burns. My shirt charred and blood-stained. And I had no legs.

Above the knees, I looked like any victim of a tragedy. It could have been a house fire, or a vicious brawl, that injured me. Below the knee, my legs were gone. Not shattered, but completely blown off. The only things remaining were a few pieces of ragged flesh and one long thin bone sticking down from my left knee.

Thanks to the man in the cowboy hat, I was the first victim to leave the scene of the bombing, and the first to reach Boston Medical Center, less than two miles away. Within fifteen minutes, I was on the operating table, the emergency room surgeons slicing off the ripped ends of my legs and cauterizing my wounds. That’s what saved my life.

And yet the photograph was faster. Even as the surgeons sawed into me, my face was popping up on websites. Someone recognized me and posted it to my Facebook page. Word started to spread among my friends. Before long, the photo was being shown on news reports.

My cousin Derek was paving roads with one of Uncle Bob’s crews. He saw it on his break. “I couldn’t breathe,” Big D told me later. “I could not even breathe.”

Aunt Jen saw it at the zoo, where she had taken Cole to celebrate Patriot’s Day. She immediately took him home. She has never let him look at the photo.

Sully clicked on my Facebook page and saw a cropped version, the one that only shows me from the waist up. Then he clicked on another site and saw my legs. He screamed, he told me, and fell to the floor.

My step-sister Erika saw it on television at the restaurant where she was waitressing. “Dad, Dad,” she said, calling him at Aamco, “Did you see the picture? Jeffrey’s on the news. He’s hurt.”

“Are you sure?” my dad shouted. He kept shouting, until he found the photo online, and then he started to cry.

They even saw it at the Costco where I worked. They were watching bombing coverage in the break room, when my picture suddenly appeared. They couldn’t reach me, so “Heavy Kevy” called the other phone number on file.

It was Mom. She was finishing her lunch shift and hadn’t paid much attention to the bombing. She didn’t even remember I had gone to the race. Typical Mom.

“He was at the marathon.”

“What do you mean? What happened? Is my son alive!”

“I don’t know his condition. I’m sorry. But he is alive. I think you need to call the hospitals.”

By then, mom was hysterical. She put her friend on the phone, went to an empty table, and started crying.

Soon after, Aunt Cathleen, Uncle Bob’s wife, called her. “I’m coming to get you,” she said.

“Is Jeff alright? Please tell me Jeff is alright.”

“That’s not my son,” Mom said, when she finally saw the photo an hour late. By then, she was back home. “That is not my son,” she said. My face was so pale and scorched, it didn’t even look like me.

That afternoon was chaos. Complete chaos. I’m sure it was chaos all over the city, but especially in my family. Uncle Bob called doctors, trying to get a medical opinion based on the photograph. Mom’s sisters called each other for information and support. They called every hospital in Boston, again and again, but no luck, nobody could find me. Mom and Aunt Cathleen went to the local police station, desperate for news. Even the police couldn’t help.

Finally, someone at Boston Medical Center said, “Wait. We have someone here with a similar name.”

I had told them my name twenty times in the ambulance. They still wrote it down wrong when they admitted me.

So it was five hours until my family finally arrived at Boston Medical Center and learned what had happened to me. Five hours of trying not to stare at that photograph. Five hours of hearing about me on the news, knowing I was gravely injured, and not being able to find out anything more. Five hours, in other words, of fear.

A lot of people in the media were unsettled by the photo. They thought it violated my right to privacy, because I never consented to its use. They thought the uncropped version was too gruesome, even as a chronicle of a major event. After the initial rush, and often during it, most news sources used the cropped version, or they put a black bar over my lower left leg where the bone was exposed. Some, like the website for The Atlantic, showed the whole picture but pixelated my face so I wasn’t recognizable.

But the graphic image was out there. It was the talk of Boston, and maybe beyond. For the rest of the day, whenever people huddled together to talk about the bombing, they talked about me: “Did you see the man in the wheelchair? The one without his legs.”

That was the short-hand people used, when they wanted to share their horror. In those first hours, that was the image that brought the tragedy home.

The photograph doesn’t bother me. I wish my family hadn’t found out that way; I wish I was just another anonymous victim. The photo changed my life.

But that’s the world we live in. A lot of people take pictures of a lot less interesting stuff. There are photos of me standing near the finish line before the bomb went off, and even photos of me on the ground. Charles Krupa, who took the iconic photo, worked for the Associated Press. I’m not upset with him. Why would I be mad at a journalist for doing his job? I’m mad that some kids set off a bomb. I’m mad that I lost my legs, and that a lot of people who have become my friends lost their legs, too. I’m mad that three people were killed, including an eight-year-old boy.

But the photograph? It just showed what happened. A bomb exploded. It was packed with nails and ball bearings, which ripped through bodies, tore apart muscles, and shattered bones. It was built for maximum violence, and it worked. People were hurt in ways so horrible that seeing it makes you sick. I’m fine that the world was shocked, because bombing a crowd of innocent people is shocking.

But that’s not what the photo is about. Not really. It doesn’t show the bomb, and it doesn’t show me being injured. It shows what happened afterward: brave people rushed in. They saved our lives. Three people died at the scene. But nobody died at the hospital, or on the way to the hospital. Nobody died from bomb wounds over the next few weeks. There were 260 of us injured, and thanks to the bravery of others, we all have a chance to go on: to love and laugh and inspire, just like before.

That’s why the picture doesn’t bother me. Because it’s not a picture of heartbreak, even though it’s still too painful for me to see. It’s a picture of hope, because the kid without his legs? The one burned and cut and deathly pale? He lived.

And he’s going to be fine.