Did you know that Colbert originally had a southern accent? Neither did we! 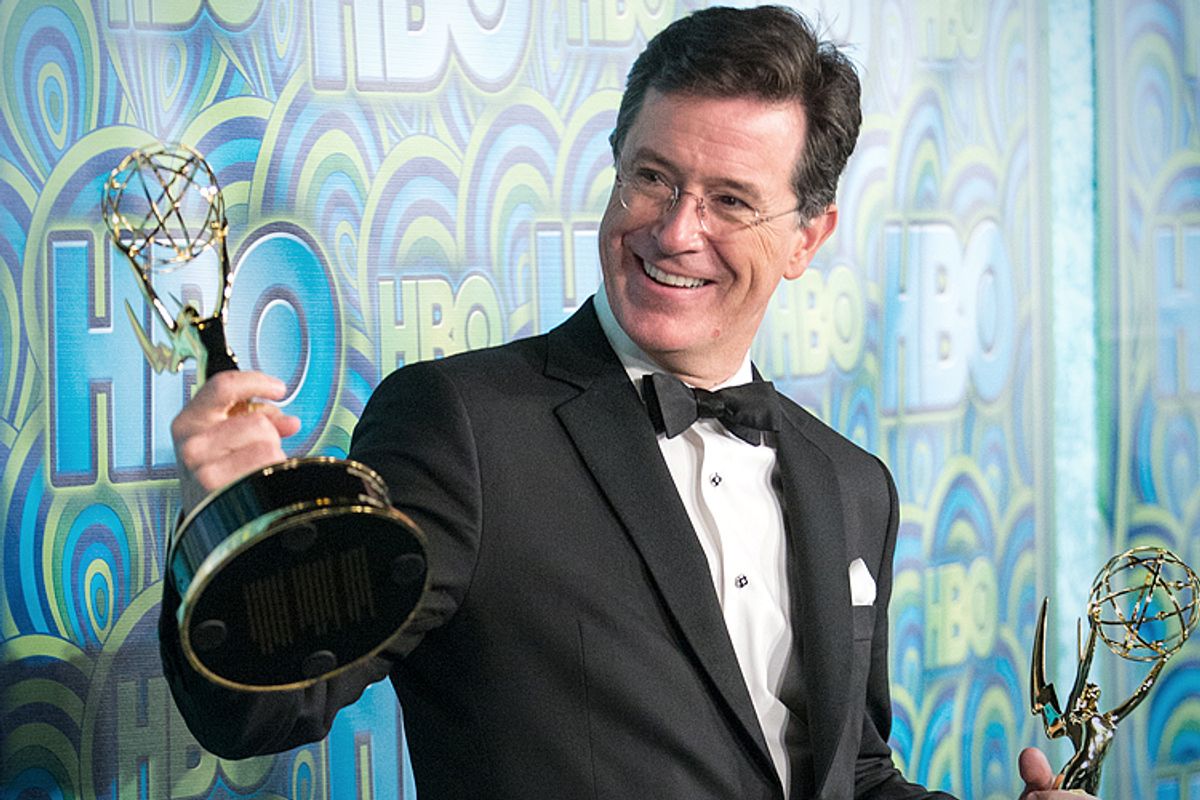 1. On September 11th, 1974, Eastern Airlines Flight 212 crashed three and a half miles from the runway in South Carolina, killing Stephen Colbert’s father and two of his eleven siblings. The pilots had been engaged in off-topic discussion (about the “A-rabs” taking over our country). The impertinent conversation the pilots were engaged in before the crash actually led to a new FAA rule, the Sterile Cockpit Rule, which prohibits pilots from engaging in non-essential activities during critical phases of flight.

2. The death of his father and two brothers led Stephen Colbert to a kind of social isolation, where he discovered Dungeons and Dragons and Lord of the Rings, of which he has an encyclopedic knowledge. In fact, he knows his Tolkien so well that, on a visit to the set of The Hobbit, he threw down in a trivia contest with the movie’s Tolkien expert, and won!

3. Colbert changed the pronunciation of his last name (from a hard T to a silent T) after a conversation with an astronaut on a flight to Northwestern, a college he transferred to after attending an all-male college for two years.

4. Colbert did not immediately have aspirations to be a comedic actor. He grew a beard in college, and intended on being a serious actor. His friend and collaborator Amy Sedaris called him “insufferable” during this period. It was Sedaris who helped to convince him to join Second City, although it would still be a couple more years before he gave up aspirations of being a serious actor.

6. Colbert was also a writer — along with Louis C.K., Steve Carell, Charlie Kaufman, Bob Odenkirk, and Greg Daniels — on The Dana Carvey Show.

7. Stephen Colbert once described the difference between himself and the character he plays on The Colbert Report as such: “I wouldn’t want to be that asshole. He’s got a tremendous ego. I get to pretend I don’t.”

8. For those who haven’t seen it, here’s a rare and enlightening look at Stephen Colbert — out of character — talking with John Kerry about how his appearance is going to go down on The Colbert Report.

9. Stephen Colbert really does teach Sunday school, and is very Catholic. At one point had this quote on his computer: “Joy is the most infallible sign of the presence of God.” In fact, he won’t do jokes about the sacrament.

10. Many years ago, Steve Carell and Stephen Colbert performed the National Anthem together in two part harmony, and it was OUTSTANDING.

11. Speaking of Carell and Colbert, the two good friends were also the voices of Ace and Gary on Saturday Night Live’s “Ambiguously Gay Duo.”

More from Pajiba: And the tears keep flowing: Another Philip Seymour Hoffman trailer

13. Before landing The Colbert Report, Colbert was the longest running correspondent on The Daily Show, preceding even Jon Stewart, as Colbert had been on during the Kilborn years. At 3:40.

14. Stephen Colbert is completely deaf in one ear. In fact, because of an operation he had as a child, Colbert can fold his ear inside out and pop it out when he squints.

15. Not only did Stephen Colbert have a cameo in The Hobbit: Desolation of the Smaug, but so did his entire family, including his lovely wife Evelyn McGee.

16. While doing genealogy research, Stephen Colbert discovered that it was the ancestors of his wife who were responsible for chasing the ancestors of Colbert off their land in Ireland. Colbert actually grew up two blocks away from his wife, but didn’t meet her until they were in their 20s, though they apparently went to the same summer camp. His wife, by the by, doesn’t really care for Stephen Colbert’s character.

17. Before he was “Stephen Colbert,” Colbert was in a commercial for First Tier Bank.

Back in the day, he was also in an episode of Whose Line Is It Anyway? and he was outstanding.

18. Two years ago, Stephen Colbert described Ontario, Canada as the “earth’s rectum.” A Canadian poll asked if the description was good for the city, and 86 percent said yes!

19. So as to avoid Southern stereotypes, as a child Stephen Colbert repressed his Southern accent, learning to speak without one by imitating news anchors.

20. The lone strike against him (debatable) is that once Stephen Colbert — who had voiced a character on The Venture Brothers — declined to return for a second season, having his assistant email the producers of the show to say, “Stephen has neither the time nor the interest in participating in your project.”