Kathie Lee Gifford is a Trojan horse for conservatism

If you thought the "Today" host was just a fun-loving, freewheeling daytime gabber, think again 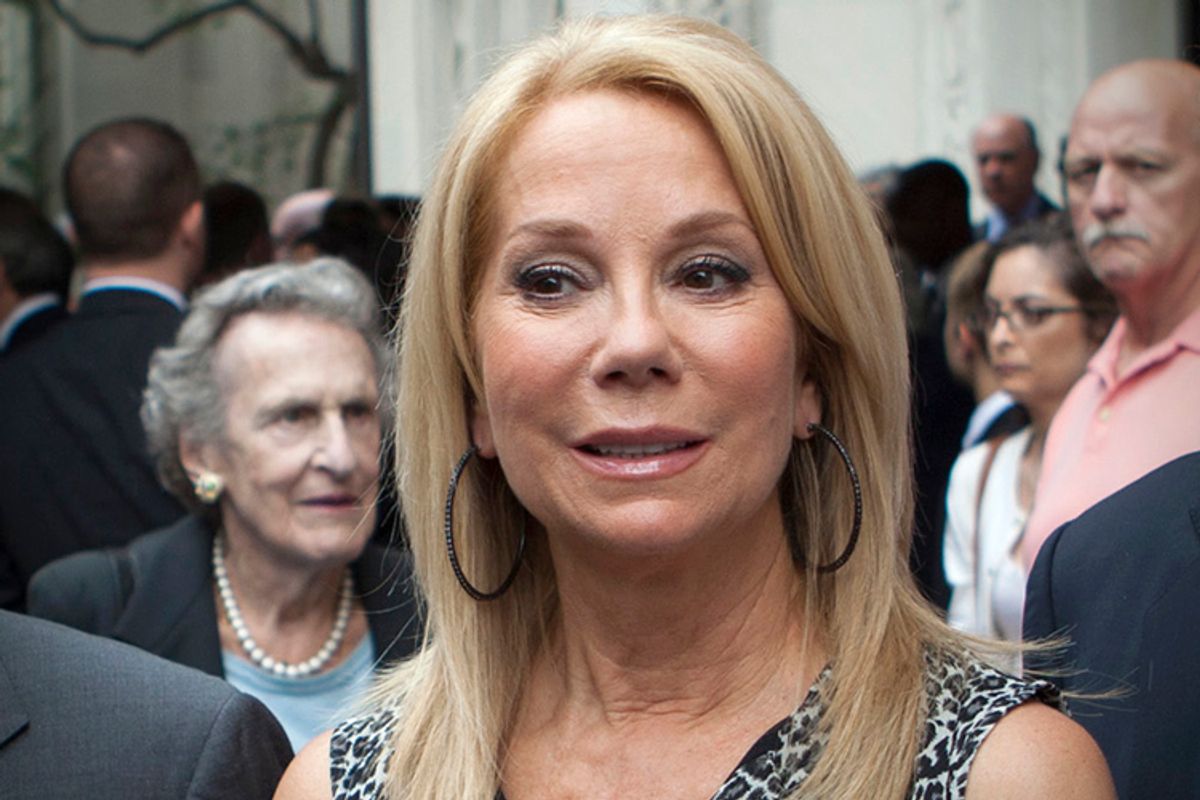 "Today" personality Kathie Lee Gifford was recently admonished by NBC higher-ups for promoting her line of wines, the punnily named Gifft, on-air. The idea, in part, is that "Today" is to some degree a news program, one that ought to be held to a higher standard than a regular chatfest.

Fortunately Gifford has a podcast, where she has for months been endorsing personal causes, from her wine to right-wing politics. It turns out that Gifford is something of a Trojan horse for conservatism, presenting for an hour a day the banal niceties that get viewers through the morning--then putting out a weekly podcast that's one long dog whistle with occasional wine plugs.

There's nothing wrong with this, of course -- Gifford's entitled to her opinions. But the success of her TV persona has rested upon the perception of Gifford as a freewheeling truth-teller who will say anything on camera. As it so happens, this whole time she's been holding back more than a few opinions.

On a recent podcast episode, for instance, Gifford interviewed Cal Thomas, a Fox News commentator who has said that no new mosques should be allowed to be built in the U.S. and has been outspoken against acceptance of homosexuality. Oddly, Gifford consistently represented Thomas as a nonpartisan figure striving only to find solutions to unnamed crises. "There's no hidden agenda with you, is there? You just love this country and want it to be great." The pair went on to discuss the necessity of congressional term limits (because, in Gifford's telling, the human heart is twisted and dark) and the so-called Age of Entitlement. Gifford told a stem-winder about how she once confronted Hillary Clinton and asked her when rich people "became the enemy." (The social safety net, in Gifford's telling, "destroys lives" because dreams of growing rich are what make life worth living.)

Gifford and Thomas agree on just about everything -- for much of the interview, neither will mention President Obama at all, but they shame the listeners for not voting, or for not paying attention to the consequences of how they voted. (The idea that those who vote for Democrats were somehow tricked into it and not thinking is an old conservative canard that Obama's popularity at election time has brought roaring back.) When Obama finally came up explicitly, it was in Gifford's allegation that his administration is not telling the truth over Affordable Care Act enrollment numbers: "I don't know that there's a person on the planet who believes those numbers are true." Thomas said those who did were "drinking the Kool-Aid."

And so it is with Gifford -- without a TV production team holding her back, she's considerably more loose-lipped than she is on "Today." Her interviews (all available here) had, for a long time, been focused on either generic show business gab or Gifford's brand of evangelical Christianity (viz. interviews with the cast of the film "Son of God" or with, say, Glenn Beck). The political turn has been a more recent development, with Candace Cameron Bure using the show as a platform to defend her claims that wives should be "submissive" to their husbands, or with Donald Trump stopping by after CPAC. Gifford joked that Trump "didn't need a TelePrompTer" -- a random reference to year-2008 critiques of Obama -- and said that those who believe the Tea Party has any position on social issues are confused. "It's not the social issues -- they keep combining the social issues. The Tea Party, as I understand it, was low taxation, small government, and fiscal responsibility. By that definition, that's me!"

And why not? Gifford has, through her career, been outspoken not about politics but about religious belief, from her advocacy work for children to her Broadway musical about Charismatic Christian Aimee Semple McPherson. But it's not shocking that she, a wealthy woman of faith, would hold conservative beliefs. It is a little shocking, though, that she expresses them so freely as someone in the employ of a network news program -- would she be as easily able to allege, on "Today," that the president was lying about Obamacare enrollment? Or to put out nebulous language about the war on the wealthy? We have no idea what Gifford's "Today" cohort believes politically -- if Matt Lauer voted at all, no one's heard about it. But "Today" is ostensibly, at least in part, a news show, if a softball one. And Gifford's insistence that people need to wake up and see it her way is the nastiest side of conservatism: the belief that the baseline human should see this worldview as the common-sense solution, and that other outcomes are the result of weird subterfuge. That's how Cal Thomas becomes a figure who, very simply, just wants America to be great.

Gifford's podcast is compulsively listenable for the new insight it offers into the brain of a person whose life has been up for public consumption since the early '90s. That said individual is really, really interested in conservative talking points is not troubling in and of itself. At least, if one presumes that a deep-seated belief that a massive swath of the country has been tricked into hating the rich has as little bearing over one's ability to cover the news objectively as does a new line of novelty wines -- and that both can be easily put aside.