Does Obama have control of his own intelligence agencies? Also, the Times has an ironic definition of propaganda 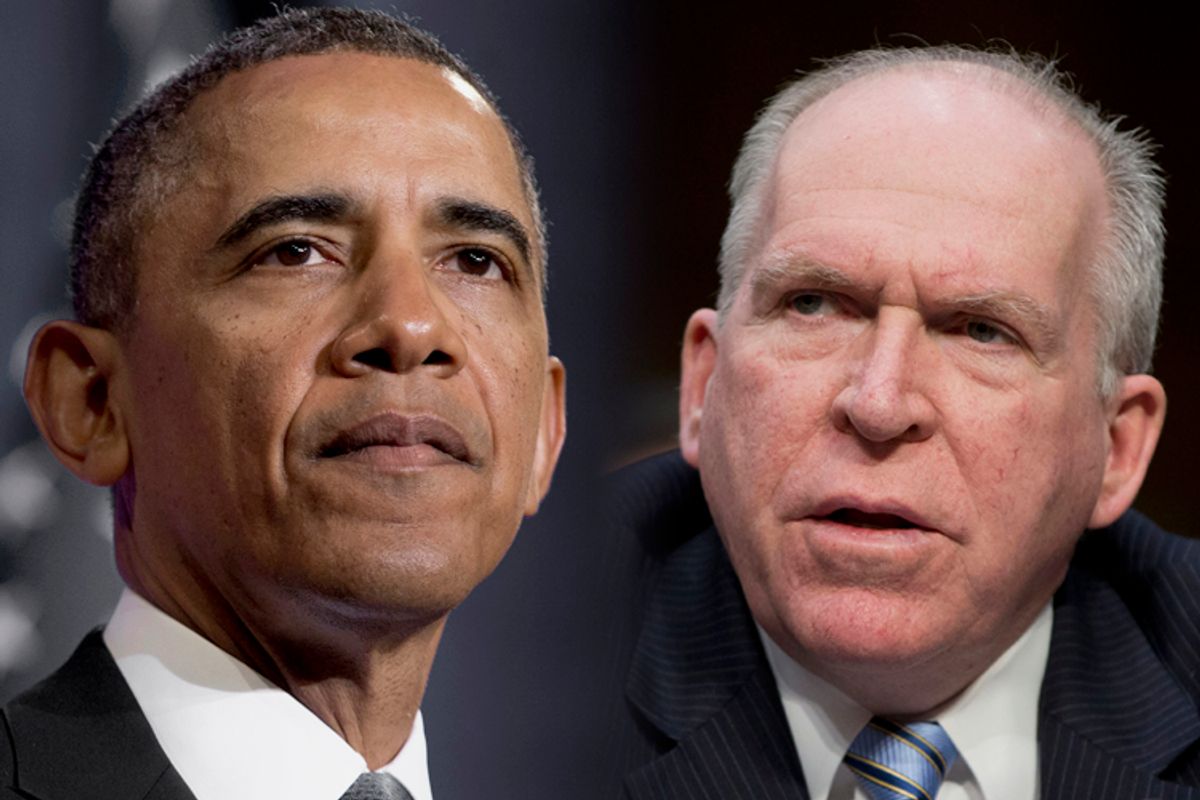 This shapes up as an important week in the Ukraine crisis. We have already witnessed the extent to which the provisional government in Kiev is unable to control the country that is supposed to embrace it. This raises critical questions as Kiev mounts a military campaign to dampen dissent in the eastern regions.

On Thursday the Western powers and the provisionals will meet in Geneva with a Russian delegation headed by Foreign Minister Sergei Lavrov to discuss a political settlement. This could be the key to defusing the crisis, except that Lavrov’s adversaries have their hearts set on a nation of use in Cold War II, not a nation properly structured to accommodate its diversity and internal tensions.

You read all kinds of astonishing stuff in the press these days. Rana Foroohar made the argument in Time the other day that the West need not worry: Vladimir Putin’s petrostate is already collapsing under the weight of U.S. and European sanctions. Alas, it is so long since Time mattered one can put anything in it these days and no one notices. (I ran across Foroohar’s piece in my doctor’s office.)

On Wednesday the New York Times published a lengthy plaint about how the Russians are deploying a 24/7 propaganda machine and it is like so totally not really fair because some people actually believe this stuff — CIA Director John Brennan being in Kiev, for instance — but in the end it is OK because only Russians, it turns out, believe it. (I understand, I think.) Subtext: Please stop believing the Russians when they mention things such as Brennan’s Kiev visit. It only looks like a coup operation straight out of Allen Dulles’ playbook; it only looks as if the Russians have a more sustainable account of the Ukraine crisis.

I have been waiting weeks for a couple of core truths to emerge from the Ukraine mess, and at last they are coming good.

One is that the Western allies — and this always means the Americans with the Europeans in tow — have come up against a post–Cold War limit that has been lying out there in the middle distance since the triumphalist 1990s. The neo-liberalization of planet Earth is not a go.

Hacks always warn each other against declaring “turning points,” but this one looks likely to materialize. It is an especially fraught moment for Americans, because our understanding of destiny is the providential duty to light all dark corners. Absolutely I think this is the driving motor behind the American effort to bring neoliberalism to Ukraine. We are a nation of unconscious drives.

The provisionals in Kiev will probably do business with the International Monetary Fund and USAID. Let them, although I would not want to be Ukrainian as the multinationals arrive to rearrange the furniture. In my early estimation it will be trouble start to finish, and Ukraine will never take its place as a chess piece in the West’s very old war against the East as Russia stands for it.

Combine Ukraine with Iraq and Afghanistan, and you have the gradual foreclosing of a long list of prerogatives available to the West for centuries.

Two is a related point: The West’s monopoly on perspective is collapsing. I had better explain what I mean.

For many centuries but notably the 20th, the Western point of view enjoyed a more or less unchallenged predominance. Yes, there was an Eastern perspective, a South-side perspective. But these were confined to press services no one read and magazines that never paid. (I stand as a witness in the latter case.) A long line of diplomatic hacks preceded Samantha Power as she injects the American point of view at the U.N.

If anything distinguishes Power and her colleagues, it is good to add, it is that in them we find the phenomenon of the “Hillary hawk,” Steve Weissman’s good phrase. The post–Cold War evangelists running American foreign policy hold to the neoliberal creed, but many of them come to it via the route of liberalism. When these people start talking about humanitarian aid, call Interpol.

The monopoly on consciousness the West has long enjoyed is also drawing to a close, to put the point another way. Al Jazeera is a case in point. On a recent visit to Hong Kong, I found a lot of people taking their evening news from RT, the Russian broadcaster. This is a good sign. A multiple world lives only in multiple perspectives, even as multiplicity is deadly to the neoliberals.

This brings us back to that Times piece on Russian propaganda. I cannot tell if the correspondent, David Herszenhorn, is a crybaby all by his lonesome or if his editor put him up to it. I love this kind of paragraph to bits:

“It is an extraordinary propaganda campaign that political analysts say reflects a new brazenness on the part of Russian officials. And in recent days, it has largely succeeded—at    least for Russia’s domestic audience—in painting a picture of chaos and danger in eastern Ukraine, although it was pro Russian forces themselves who created it by seizing public  buildings and setting up roadblocks.”

I am OK with “new brazenness.” The world needs more, Russia’s or otherwise. Then we run into trouble.

Russia has painted a picture of chaos and danger that is at odds with reality. But damn it if it does not look like chaos and danger whenever I turn on the television or read Herszenhorn’s paper. The correspondent’s point is to imply Kiev is in control when it is not.

And anyway, it was pro-Russian forces who created this chaos and danger. This must mean the chaos and danger that would not exist except that Russian propaganda created them. Note, too, the radical amnesia. History begins in this paragraph when pro-Russian Ukrainians seized buildings. All that came before can be forgotten as irrelevant to the case.

Propaganda in the service of denouncing propaganda is clever if not original. In truth, the Americans have funded propaganda ops in Ukraine for years. When Geoffrey Piatt took over the embassy in Kiev last August, the first thing the new ambassador did was authorize a grant for an online television outlet to support the doings in Independence Square.

And for the record, the CIA director was in Kiev, although Herszenhorn wants to sneak it in as propaganda. What neither he nor anyone else in the Western media will address is why. You have to go to the Russians for this: It was to advise on security and defense.

Some things remain outstanding in Ukraine, even if our core truths begin to emerge. It is good to watch for them.

One is just what defense and security advice Brennan had on offer. The provisionals moved into eastern Ukraine within days of his visit. And it had become clear by the time they did they had no hope of prevailing in a region where their own security people were in mutiny. Did Brennan signal U.S. support when needed? I dearly hope not: That would be dangerous times 10.

Two is exactly who is running around in the eastern portion of the country. The Russians say Kiev has brought in people from Right Sector, the neo-fascist group propping up the provisionals, and foreign mercenaries from Greystone, a sometime branch of Blackwater, the death-for-hire bunch famous for mass-murdering innocent Iraqis.

The West asserts daily that Russian operatives are thick on the ground.

All of this could be. One would like to see some rumpled prisoners with hanging heads so we know what is true and not.

Three is how much the U.S. has committed to this operation. A couple of months ago, Sergei Glazyev, a senior adviser to Putin, told the BBC that Washington was spending $20 million a week on the opposition (who are now in power). It is in keeping with other American subversions.

Four, what is the U.S. going to do now? This is important. It is plain at this point that the Ukraine operation is a coup gone wrong: It could never have been intended to get this messy. The neolibs cannot step back — it is not what these guys learn at Georgetown.

So we come to the Geneva talks Thursday. Lavrov is expected to advance the case for a federalist solution in Ukraine. The others will assert that this will effectively pull Ukraine apart.

It will not: Federalism is the mechanism needed to keep the country together. Americans, above all others, ought to know this.

Think about the makeup of the country —t he demographics, the history, the language question. A federalized Ukraine could turn out to be the best thing to happen to the nation’s 46 million people since the Soviet Union slipped its grip.

My call: Secretary of State Kerry and the Europeans will sink this, first, because it is the Russians’ idea, and, second, because it will render Ukraine too decentralized to be of use in the eternal West vs. East antagonism. In my view, geopolitical uselessness is a condition near to bliss for nations such as Ukraine.

Ukraine was never about Ukraine for the people behind this calamitous operation. President Obama has been shamefully duplicitous on this point all along. Ukraine was merely the next job. The best one can say about this president is that he may not be in control of the intelligence and security establishments any more than Kiev is in control of its. But this is the stuff of another column.