Why do we fumble over athletes and rape accusations? 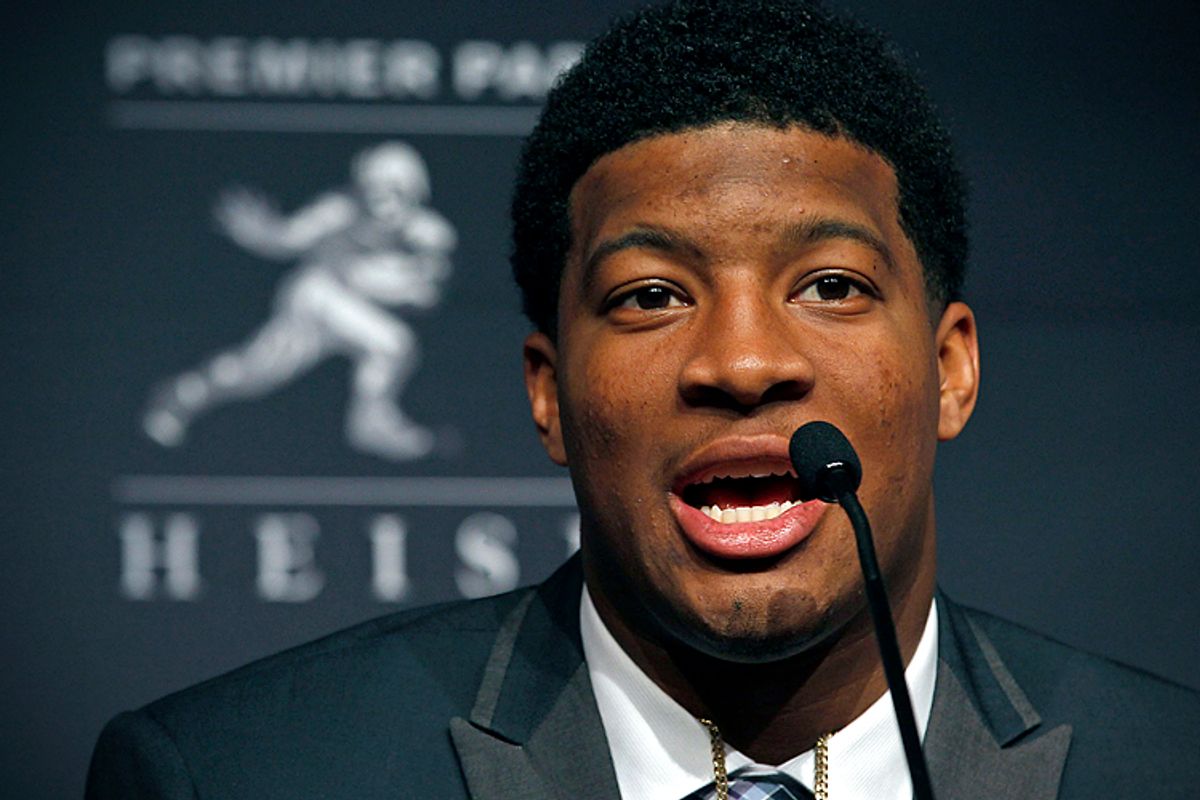 Our athletes are the closest things we have in this country to gods. In a nation devoid of royalty and a world in which superheroes only exist in comic books and big budget movies, it's our sports figures who represent the pinnacle of perfection, the American ideal of strength and grace. And when that narrative doesn't work, when instead an athlete is accused of something as monstrous as sexual assault, too often it's easier to ignore the unpleasant possibilities than investigate their merit. You want a truly stunning example of that misguided athletic hero worship in action? Look no further than the detailed, infuriating New York Times investigation Wednesday into the saga of Heisman winner Jameis Winston, and the woman who says he raped her.

Some of the story, which first came to light last year, is already well-known. But in reporter Walt Bogdanich's painstaking account, the litany of a university and criminal justice system's prioritizing the career of a football player over the serious allegations of a young woman is enragingly clear. What happened that December evening in 2012 will likely never be definitively proven. What is, however, indisputable is that this is a story in which basic evidence gathering was not done, a suspect was not even contacted by police for nearly two weeks after being identified, and the case was summarily brushed off before even obtaining DNA evidence. It was a case in which the suspect was allowed to cavalierly tell police that "He had baseball practice but would call back later to set a time," and in which "Neither the police nor the prosecutor’s office subpoenaed the phone records of [Winston's friends] Mr. Casher, Mr. Darby or Mr. Winston — even though they investigated all electronic communications to and from the accuser around the time of the sexual encounter." It's a story in which FSU's athletic department knew one of its stars had been investigated for a crime, but assured he played his full season "without having to answer any questions." Now, a year and a half later, much of what could have been gathered as evidence – like security video from the bar where the woman and Winston allegedly met, and a reported video of the encounter – no longer exist. Winston has never been formally charged.

Just because a college athlete has been accused of a crime absolutely doesn't mean he's guilty. Earlier this month, author William D. Cohan released "The Price of Silence: The Power of the Elite and the Corruption of Our Great Universities,” an exhaustive account of 2006's Duke lacrosse case, a bungled media circus of false accusation that Laura Miller recalls "triggered everybody’s prejudgments" about jocks and privilege.

But the Winston story – along with many, many others in just the past few years alone – reveals an institutionalized carte blanche frequently given to college athletes accused of crimes against women, while their alleged victims are held to disproportionate scrutiny. We saw it at the University of Michigan, where four years elapsed between an alleged sexual assault at a frat party and kicker Brendan Gibbons' ultimate expulsion for "violating the university’s Student Sexual Misconduct Policy." We've seen it in the University of Missouri's admitted "shortcomings that may have occurred on our part" after swimmer Sasha Menu Courey committed suicide after she said she'd been raped "by at least one MU football player." We've seen it in the story of former Missouri Tigers guard Michael Dixon Jr., who's been accused twice of rape. One of his alleged victims declined to press charges because of "fear of retaliation and being ostracized by family." We've seen it at the University of Delaware, where a former student claims that after she reported she was raped in a sophomore football player's apartment, the assistant dean of students "did not share the student's rights as a victim or offer any protection or required services, nor did she notify police or any other administrators about the incident or pursue an investigation." We've seen it at Columbia, where three female students claim they were sexually assaulted by a campus athlete and "were never encouraged by the school to go to cops" while "the school also dragged out their investigations for months."

Our cultural affection for and loyalty to our athletes runs deep. We don't want to believe bad things of them, because it doesn’t fit the heroic icon image. As Jose Canseco shrugged, when he was accused last year of rape, "I don’t have to rape a woman." Look at Steubenville. After Trent Mays and Ma’lik Richmond were found guilty of rape, CNN’s Poppy Harlow moaned that "It was incredibly emotional — incredibly difficult even for an outsider like me to watch what happened as these two young men that had such promising futures, star football players, very good students, literally watched as they believe their life fell apart." Behold convicted rapist and bestselling author Mike Tyson, who in recent years has enjoyed the status of hilarious punch line in "The Hangover" and a one-man show on Broadway.

The assumption of innocence is the foundation of American justice. But justice also rests on honest, impartial investigation. And as a lawyer for Winston's accuser now asks, "Why did the school not even attempt to investigate the matter until after the football season?" A justice and educational system that repeatedly protects athletes accused of sexual assault, one that dismisses and ignores the claims of alleged victims, is a system that send a chilling message to its men and its women. It's one that says that if you can throw a ball, you get to play by a different set of rules.