Why you should be deeply dreading the Comcast-Time Warner merger

Their claim of "substantial public interest benefits" is anything but. Get ready for worse, more expensive service 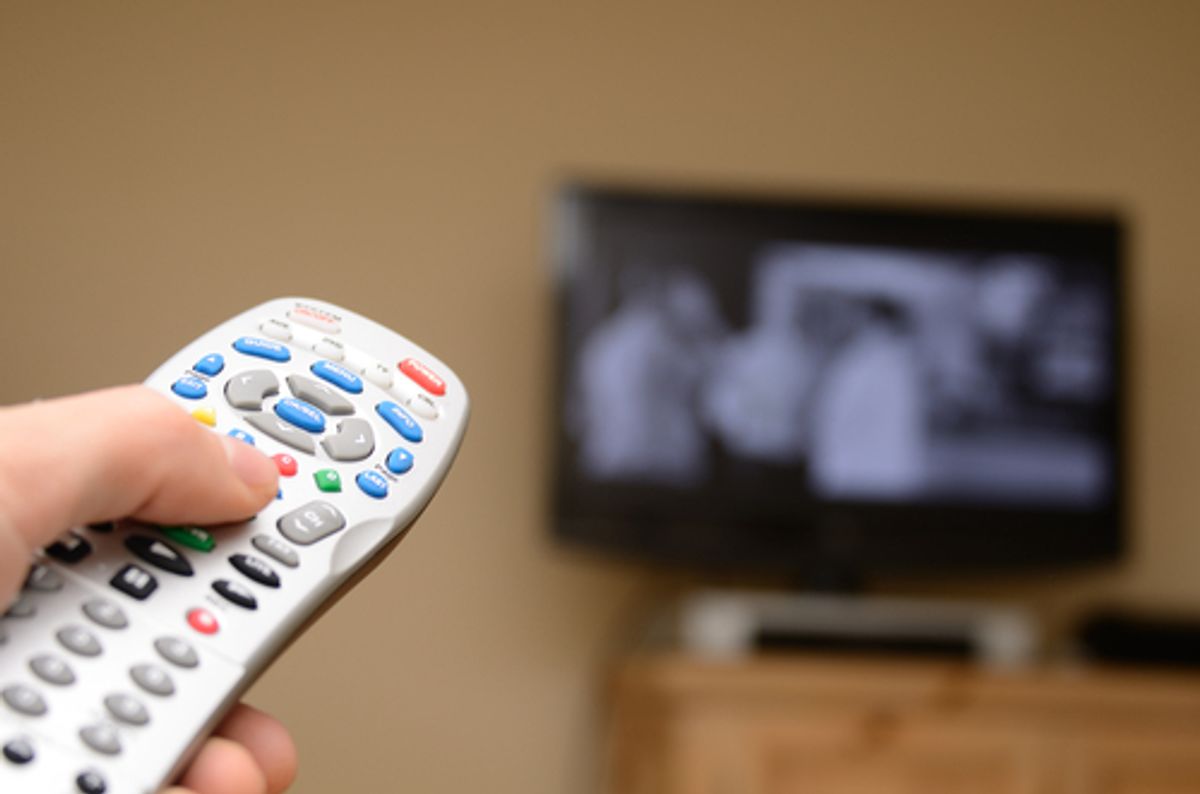 In February, news broke that cable and Internet giants Time Warner Cable (TWC) and Comcast would be merging, placing a new mega-company in charge of services rendered to their 30 million customers. And neither the Obama administration nor Congress  don't seem to be raising many red flags. David Carr in the New York Times recently wondered aloud about Comcast’s $45 billion bid for TWC,“How can the largest cable company in the country bid to buy the second-largest and gain control over 19 of the country’s top 20 markets — corralling a 30 percent market share in cable and a 40 percent share in broadband — and there be no serious questions?"

In its public interest statement filed this month with the Federal Communications Commission, Comcast touts the many supposed benefits of the merger, even arguing that joining with TWC would be “pro-consumer, pro-competitive, and... generate substantial public interest benefits.” But a review of the facts shows exactly how wild this claim is.

One Monopoly To Serve Them All

In order to bolster its claim that a Comcast-TWC merger wouldn’t be anti-competitive, Comcast argues in its public interest statement that it has a much smaller footprint in the market than its competitors. It cites, for example, Microsoft announcing “that it will feature ads on the Xbox One, creating a new video advertising platform,” and the fact that “Amazon continues to leverage its unequaled sales platform and family of competitive tablets to promote its burgeoning Prime Instant Video business ... .In contrast to all of these companies, both Comcast and TWC have a more limited scale and scope.”

The problem with this argument is that Amazon and Microsoft, as vast as their empires are, don’t control people’s basic access to cable television and broadband (which is more or less a necessity for Internet users in 2014). The Xbox One offering Netflix doesn’t prevent users from accessing the service on dozens of other competing devices, but the same is not the case for access to basic information that TWC and Comcast’s cable networks provide. If the merger were to go through, tens of millions of Americans would be locked into less competitive cable and broadband markets, unable to vote with their feet and choose competitors who offer different services.

How monopolistic would the new Comcast-TWC company be? Susan Crawford, co-director of the Berkman Center for Internet & Society at Harvard University, estimates that the “network would pass nearly two-thirds of American households (meaning that those homes could be connected to the company’s network without any further extension of the network). The company would have just one direct competitor: Verizon’s FiOS service, which would overlap with just 15 percent of the new company’s territory.”

Consumers Union warns that “Comcast owns a wide assortment of content and television channels as a result of its previous merger with NBC Universal. By owning a massive network of cable and broadband pipelines and significant content, Comcast would have the ability to control the speed, quality, and type of programming for an unprecedented number of consumers.”

But it’s not just consumers that could get the short end of the stick.

“In a future without Net Neutrality, Comcast would be free to act as the Internet's editor-in-chief, choosing what content and services get attention, and what doesn't -- what content gets to pass through its pipes, and what content gets blocked,” says Free Press’s Tim Kar. “This would not only snub out any online innovation that Comcast doesn't control, it would also threaten the free speech rights of all online users, including journalists.”

Ironically, Comcast is arguing today that buying TWC would be good for consumers, but it made the opposite argument in 2010 —  that keeping TWC as a competitor would prevent anti-competitive behavior following its purchase of NBCUniversal. At a Senate Judiciary Committee hearing this month, Sen. Al Franken (D-MN) pointed out this hypocrisy:

Comcast has argued that there's nothing to worry about here because it doesn't compete with Time Warner Cable in any ZIP code ... When Comcast wanted to acquire NBCUniversal, Comcast's CEO told this committee not to worry about it because there were still other robust distributors, and he specifically named Time Warner Cable, which would prevent Comcast from setting anti-competitive prices for Comcast content.

The point was that Comcast couldn't get away with that sort of behavior because distributors including Time Warner Cable wouldn't stand for it, and they could go to the FCC and complain about it, too. Later in the hearing, Comcast's CEO also told us, 'We are not getting any larger in cable distribution here.' Well, if this deal goes through, Comcast will become larger in cable distribution, and if this deal goes through, Comcast never again will have to negotiate with Time Warner Cable when it comes to setting prices for NBC content. And NBC content, everyone should remember, is 20-some networks.

But as is often the case in Washington, the arguments publicly made are just the tip of the iceberg in the push for policy changes.

Comcast may have a hard time convincing the public that less choices are good for consumers, but it is tapping a set of wide set of resources to make sure Washington doesn’t object.

Shortly after the deal was announced, Senator Chuck Schumer (D-N.Y.) put out a statement greenlighting the merger, saying that the companies involved had promised to protect jobs in upstate New York. It was soon revealed that Schumer’s brother was one of the attorneys who had negotiated the deal, and he quickly recused himself from the dealings.

Despite this setback, Comcast continued to work hard to have influence in Congress. As the Senate Judiciary Committee began hearings on the merger, it called witnesses on both sides of the debate. Christopher Yoo, an antitrust expert who teaches at the University of Pennsylvania’s law school, argued that the merger is “unlikely to harm consumers in either market.” The problem is, David Cohen, the Comcast executive who also testified at the hearing, is the chairman of the trustees of the University of Pennsylvania — meaning he is in effect Yoo’s boss.

But stacking witnesses and hiring lawyers who happen to be related to U.S. senators aren’t the only tricks up Comcast’s sleeve. In 2013, Comcast had 107 lobbyists on its payroll, 86 of whom were previously working in the federal government. Comcast employees and their political action committee (PAC) spent $3,183,117 on federal elections in 2012; they’ve spent an additional $1,346,410 in the 2014 cycle. Comcast’s PAC has donated to every single member of the committee that is overseeing the merger; Schumer leads the senators with $35,000, followed closely by Sen. Patrick Leahy (D-VT) at $32,500 and Sen. Orrin Hatch (R-UT) at $30,000. Franken, who is critical of the merger, has not received anything in recent years but did receive $5,000 from Comcast’s PAC for his recount fund in 2009. This comes on top of well over a milliondollars donated to party committees in 2012, and hundreds of thousands donated in 2014.

Beyond big spending in political campaigns and hiring up scores of lobbyists, Comcast has several more tools in its tool belt. It is a huge donor to nonprofits and think-tanks that yield considerable heft in policy advocacy. For example, it has financially backed both the Heritage Foundation, the think-tank closest to the Republican Party, and the Center for American Progress, which is close to the Democrats. Neither has officially spoken against the merger nor put out policy papers discouraging lawmakers from supporting it. The Heritage Foundation’s blog even featured a post claiming “this deal is far from the threat indicated by critics.” Other nonprofits have taken a cautious tone. The National Council of La Raza, which received $350,000 from Comcast’s philanthropic foundation in 2011, put out a cryptic statement along with a number of other Hispanic organizations simply saying that it looks “forward to engaging these companies in a robust discussion about this transaction and how it will impact our communities.”

Perhaps the biggest possible tool of influence that Comcast has is its own media empire. Following its merger with NBCUniversal, Comcast now owns networks like CNBC and MSNBC, some of the networks that are traditionally turned to for business reporting and corporate accountability. In news discussion about this merger, it goes without saying that these networks will be effectively neutered.

Although Comcast and Time Warner Cable seem to be holding a lot of cards, they’re not necessarily an unbeatable hand. When lobbying giant AT&T sought to buy T-Mobile, press freedom and anti-trust activists fought back, successfully killing the $39 billion deal. The campaign against that merger could prove a model for those trying to fight Comcast today, and there are signs there’s already a broad coalition ready to contest the creation of this new monopoly. This coalition includes not only progressive organizations like MoveOn and the National Organization for Women but also the American Family Association and Tea Party Nation. With so much at stake, this atypical conglomeration may be all that stands between tens of millions of Americans and a massive monopoly over television and web access.