The original "Godzilla": Still king of the monsters

There's a new Hollywood "Godzilla" on the way, but Ishiro Honda's brooding 1954 masterpiece can't be topped 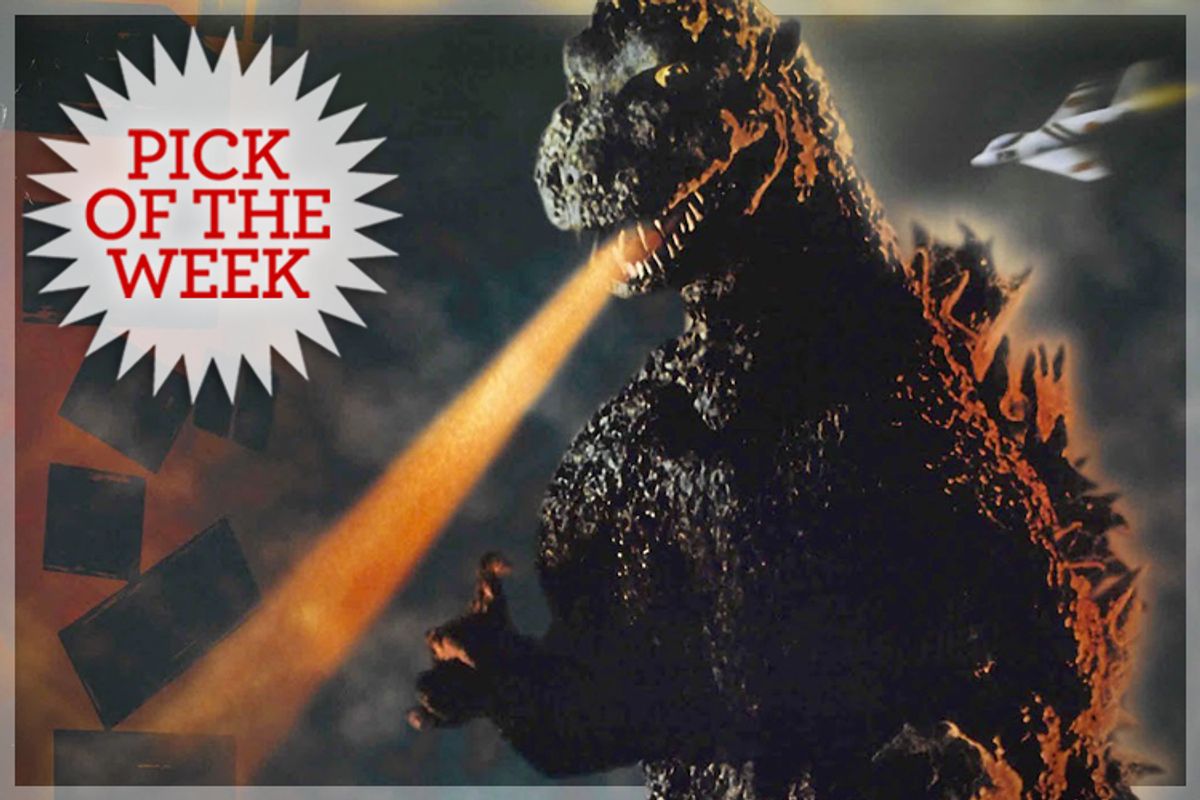 Across six decades, two dozen or so Japanese sequels and a couple of Hollywood remakes – the second of which arrives next month – Godzilla has been significantly domesticated. By the time I first noticed him in the mid-1970s, he had become something like a gigantic Siamese cat, playful and unpredictable but essentially well meaning. In an extended series of movies made for kids, he played the Zeus of a quasi-pagan pantheon of monster-gods, defending mankind (or at least Japan) from pollution, mad scientists, alien invaders and even evil robot versions of himself. But the reptilian godfather of all kaiju could never quite be contained by his friendly latter-day incarnation, which is the source of his enduring power. If we go back to Ishiro Honda’s original 1954 “Godzilla” we encounter him again in his true guise, implacable and dead-eyed, a survivor of the H-bomb, a vengeful specter from the past and the return of the Freudian repressed.

Just to get the details right: The 60th-anniversary digital restoration that Rialto Pictures is releasing this week as “Godzilla: The Japanese Original” is substantially the same film Rialto released in 2004, the first time Western audiences had been able to see Honda’s original movie instead of the sliced-and-butchered Hollywood version with Raymond Burr. But it looks a lot cleaner and, far more important, has new subtitles by Bruce Goldstein and Michie Yamakawa that render the dialogue into colloquial American English and supply a good deal of context and detail. This isn’t a different film from the previous release, but it’s a better and deeper one. Certain themes leap into clearer focus, including the repeated and explicit references to the atomic bomb and to Japan’s World War II experience: In a scene cut from the American version, a hard-edged young woman – who, in context, probably reads as a product of American cultural influence -- flirts with two guys on a Tokyo commuter train, joking that if she could survive the bombing of Nagasaki, she can survive the giant lizard.

Gareth Edwards’ upcoming big-budget “Godzilla” reboot with Elizabeth Olsen, Aaron Taylor-Johnson and Bryan Cranston seems more carefully thought out than most Hollywood hack jobs, but good, bad or indifferent it won’t be this film. If you know the original “Godzilla” only by reputation, and Godzilla himself only as a camped-up cultural signifier in a rubber suit, then seeing this version may be a real eye-opener. While the acting is hit-and-miss and the story jumps around somewhat confusingly, Honda's film is a one-of-a-kind experience all the way through, one that stands the test of time better than I had expected.

Although Honda and co-writer Takeo Murata were inspired by cheesy American B-movies of the period like “The Beast From 20,000 Fathoms” (also a nuclear parable), “Godzilla” actually feels closer to other genres: It’s a gripping war film that depicts shocking carnage and destruction, and a social melodrama rooted in the anxious and doom-haunted quality of postwar Japanese life. Its black-and-white cinematography by Masao Tamai is varied, careful and sometimes spectacular, and I guess it should be – at the time “Godzilla” was the most expensive Japanese film ever made, stripping that title from Akira Kurosawa’s “Seven Samurai,” which was released earlier the same year. At least two revered Japanese actors appear in both films, and I think serious scholars of Japanese film would now agree that both are landmarks of Japan’s cultural rebirth after the fall of its empire.

Even in the sanitized version exported to the West, from which all traces of both anti-American sentiment and narrative complexity had been comprehensively scrubbed, it was no secret that Godzilla arises from the ocean floor as a byproduct of nuclear testing. As producer Tomoyuki Tanaka expressed it years later, “Mankind had created the Bomb, and now nature was going to take revenge on mankind.” To Japanese viewers, the reference was highly specific: On March 1, 1954, the United States had detonated a 15-megaton hydrogen bomb near Bikini Atoll in the Pacific Ocean, quite possibly the most powerful weapon ever tested on our planet. It sent a cloud of deadly radioactive ash across thousands of miles of ocean, poisoning the crew of a Japanese fishing trawler (six of whom later died). So “Godzilla’s” opening scenes, featuring the disappearance of several fishing boats and shipping-company offices besieged with worried relatives, were pretty much torn from the headlines.

There is no reference to America or Americans in the script of “Godzilla,” a strategic omission that winds up feeling conspicuous. Everyone in the viewing audience knew who had set off that H-bomb and dropped the Hiroshima and Nagasaki bombs, of course, but despite Tanaka’s comment I don’t think you can read “Godzilla” as entirely or even primarily a screed against Yankee nuclear arrogance. I understand this film as a parable about Japan’s relationship with itself more than with America or the world. It takes a full half-hour of increasingly suspenseful screen time before Godzilla is fully revealed to Japan and the viewer, but some people know what’s going on. An elderly villager on Odo Island (played by Kokuten Kodo, who was a quite similar character in “Seven Samurai”) explains to disdainful younger locals that Gojira is an ancient demon of the deep, who is now angry because modern Japanese have forgotten to propitiate him with human sacrifice. Their response is pretty much, “Thanks for the input, grandpa,” and boy, are they sorry later.

That folklore is entirely made up, but the idea that Godzilla is a combination of the ancient and the modern – much like the nation he loves, and loves to trample – is central to any understanding of his lizardly greatness. Honda’s “Godzilla” is on one level a reenactment of Japan’s devastating defeat in World War II – the way the mood shifts from comedy to tragedy during Godzilla’s destruction of Tokyo is masterful – and on another an expression of the collective guilt and shame associated with that endeavor. The big G is both an unanticipated disaster that leads to the death of many innocents, not unlike the hurricanes and earthquakes that so often afflict a Pacific Rim archipelago nation, and also a form of karmic payback for the arrogant sins of empire. I’m not going to claim immense expertise here, but I think that all jibes with the postwar Japanese sense of self: No one deserves to have their cities incinerated, but on the other hand we brought this on ourselves.

A whole bunch of this ambiguity is wrapped up, perhaps too overtly, in the movie’s most mysterious character, a one-eyed Dr. Frankenstein mad-scientist type played by Akihiko Hirata who has invented an eco-terror weapon that’s even more devastating than the H-bombs that unleashed Godzilla. Dr. Serizawa is engaged to the movie’s ingénue (Momoko Kochi) in an old-school arranged-marriage scenario, but never expresses any feelings for her or the human race in general; his eye is evidently not the only thing he lost in the war. Dr. Serizawa’s resemblance to Peter Sellers’ title role in Stanley Kubrick’s nuclear-terror farce “Dr. Strangelove” (made a decade later) is likely nothing more than a thematic correspondence, but is striking nonetheless. In Honda’s moody, downbeat ending the vengeful and violent Godzilla is dispatched to his watery grave (for later resurrection, of course), while we are left to reflect that he isn’t the real monster in the story.

”Godzilla: The Japanese Original” is now playing at Film Forum in New York. It opens April 25 in Santa Fe, N.M.; May 2 in Boston, Los Angeles, Portland, Ore., Seattle and Washington; May 5 in Pittsburgh; May 8 in Kansas City; May 9 in Albany, N.Y., Chicago, Cleveland, Dallas, Denver, Fort Collins, Colo., and Nashville; May 15 in San Antonio and Boise, Idaho; and May 23 in Houston, with more cities to follow.