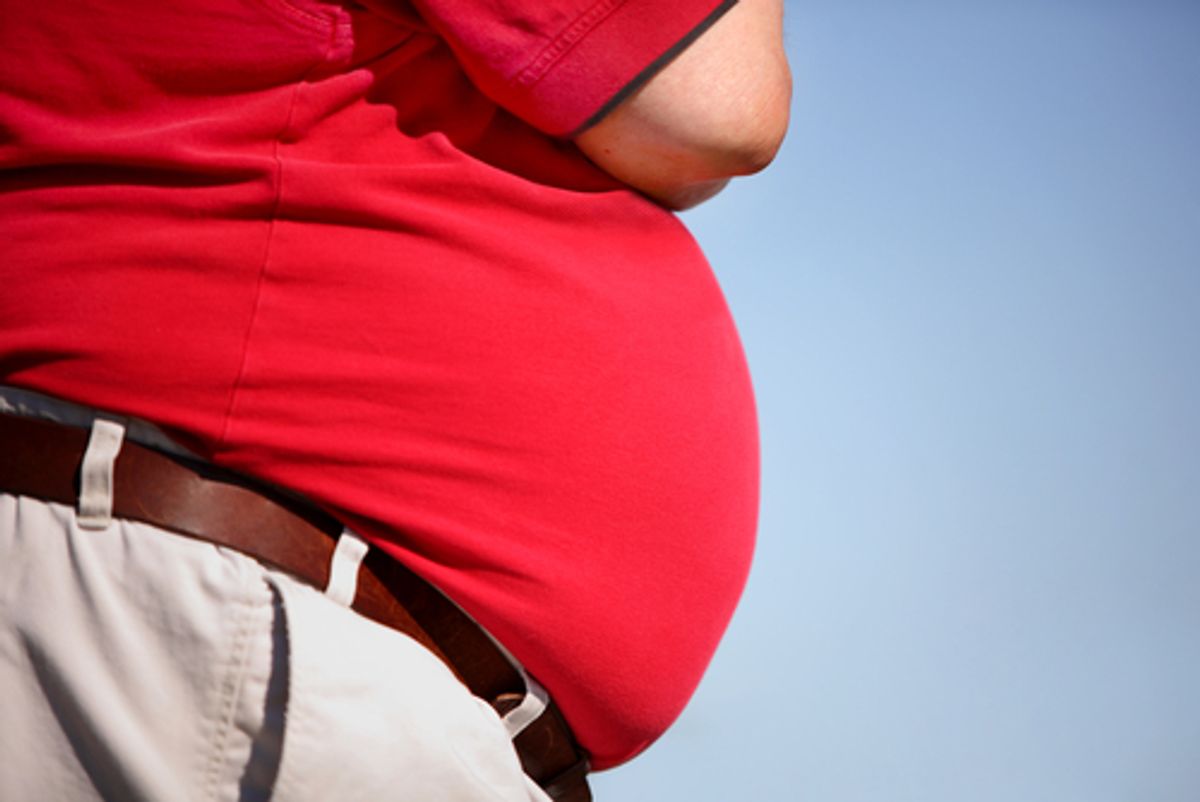 Obesity is a problem all over the country, but the problem is worse in some states than in others. A recent Gallup study presented state-by-state obesity stats and while the research didn't get into politics, one need only scratch the surface to notice that many of the more obese states lean Republican. Of the 10 states Gallup cited as the most obese, eight went for Republican Mitt Romney in the 2012 presidential election: Mississippi, West Virginia, Louisiana, Arkansas, South Carolina, Tennessee, Kentucky and Oklahoma (the exceptions in that top 10 are Ohio and Delaware, both of which Obama won). And except for Montana—which came in at #1 for thinness—all of the 10 states Gallup cited as the least obese are states Obama carried (including Massachusetts, Connecticut, New Mexico, California, Hawaii, Minnesota, Nevada, Colorado and New York).

This is no coincidence: Republicans promote policies that tend to entrench poverty, and obesity and poverty often go together. The Republican-dominated states where obesity rates are the highest are states where one is more apt to find more poverty, weak union protection, an abundance of people who lack health insurance and a strong opposition to the Affordable Care Act of 2010.

The obesity epidemic in the U.S. can be attributed to a wide variety of factors—not only poverty, lack of health insurance and inadequate access to healthy food, but also everything from sedentary lifestyles to stress. Obesity can’t be blamed exclusively on the conservative policies; there is plenty of obesity in Philadelphia, Baltimore and other Democrat-dominated cities. But Gallup’s poll clearly demonstrates that obesity is widespread in red-state America, and GOP policies, from opposition to healthcare reform to union-busting to cutting food stamps, only exacerbate the problem.

Below are the 10 most obese states with analysis of the economic and political conditions in those states.

Mississippi topped Gallup’s list of the U.S.’ most obese states with a 35.4% obesity rate. In other words, one in three Mississippi residents is obese (which is defined as having a body/mass index of 30 or higher). And Mississippi is as Republican as it gets: not since Jimmy Carter’s victory in 1976 has a Democrat carried Mississippi in a presidential race. The U.S.’ most obese state is also its poorest, and Mississippi’s healthcare crisis only makes matters worse: one in five Mississippi residents lacked health insurance in 2013. Regardless, Mississippi Gov. Phil Bryant (a Republican) remains a vehement opponent of the Affordable Care Act, refusing any type of Medicaid expansion via Obamacare in his state. The people who need healthcare reform the most in Mississippi—the obese, the uninsured, the poor, the unemployed or underemployed—are the very people Bryant and other Republicans have turned their backs on.

West Virginia has long been a poster child for white rural poverty in the United States, and it isn’t hard to understand why. According to the U.S. Census Bureau, West Virginia (which was 92% white in 2012) had a poverty rate of 17.6% from 2008-2012 compared to 14.9% nationwide. In some West Virginia counties, life expectancy is only slightly higher than it is in Ghana or Haiti—and the fact that West Virginia has the second highest obesity rate in the U.S. (34.4% in Gallup’s poll) certainly isn’t helping West Virginia residents live longer. West Virginia does have a Democratic governor (Earl Ray Tomblin) and Democrats (many of them center-right Blue Dogs) presently dominate West Virginia’s state senate. Nonetheless, Republican ideas are widespread in West Virginia, and Republican Evan Jenkins (a candidate for the U.S. House of Representatives) has been campaigning on repealing the Affordable Care Act. Given West Virginia’s obesity and poverty rates and frighteningly low life expectancy, rolling back healthcare reform is the last thing that state should be doing in 2014.

Although the least obese states in Gallup’s poll were generally either swing states or blue states (including California, Hawaii, New York and Connecticut), Gallup considers Democrat-dominated Delaware the third most obese state in the country thanks to an obesity rate of 34.3%. Very much a blue state, Delaware hasn’t given its electoral votes to a GOP presidential candidate since George H.W. Bush, Sr.’s victory over Michael Dukakis in 1988. Delaware’s obesity problem cannot honestly be blamed on Republicans, but arguably, it reflects the growing inequality in the Democratic side of America. Democratic America ranges from ultra-gentrified, upscale places like Seattle, San Francisco and Manhattan to the most blue-collar parts of Delaware, and blue-collar America has been slammed hard by the current economic downturn.

In September 2013, Democratic Sen. Robert Marshall of Wilmington asserted that Delaware needed to start creating a lot more high-paying jobs that don’t require a college degree. Though Marshall didn’t mention obesity, his point was relevant to a discussion of obesity because a lack of quality blue-collar jobs contributes to poverty—which in turn, leads to obesity.

Right behind Delaware when it comes to obesity is the heavily Republican Louisiana, which has an obesity rate of 32.7% in Gallup’s study—and Louisiana has also had, according to the U.S. Census Bureau in 2012, a poverty rate of 19.9% (the third highest in the U.S.). A state with as much poverty and obesity as Louisiana is a prime example of why healthcare reform needs to go forward, yet Louisiana Gov. Bobby Jindal (a possible candidate in the 2016 GOP presidential primary) has called for repealing Obamacare. Obesity and all the problems that go with it, from heart disease to high blood pressure to Type 2 diabetes, are better controlled when one has adequate access to healthcare, and Republicans like Jindal only make it harder for the poor to see a doctor.

Although Arkansas’ current two-term governor, Mike Beebe, is a Democrat, the state on the whole remains very Republican-leaning—and according to Gallup, it has the U.S.’ fifth highest obesity rate: 32.3%. The fact that obesity and poverty go hand in hand is evident in Arkansas, which had a poverty rate of 18.7% in 2011 (according to the U.S. Census Bureau). Arkansas children, according to the 2011 Kids Count Data Book, are facing the second highest child poverty rate in the United States. In a state with all that obesity and poverty, Republican State Sen. Nate Bell’s “solution” to those problems is to fight Medicaid expansion and discourage Arkansas’ uninsured from singing up for Obamacare.

The sixth most obese state in the U.S., according to Gallup, is South Carolina (a Republican-leaning state that Obama won in 2008 but lost in 2012). South Carolina has a poverty rate of17.6%, according to the U.S. Census Bureau. Around 764,000 South Carolina residents lacked health insurance in 2011 (according to a study conducted for the South Carolina Department of Health and Human Services), but Republican Gov. Nikki Haley has rejected Medicaid expansionvia Obamacare in her state. In addition to helping keep South Carolina’s poor uninsured, Haley has contributed to their poverty by being fiercely anti-union: Haley infamously said, “I love that we are one of the least unionized states in the country.”

The state Gallup cites as the seventh fattest in the U.S. is Tennessee, which has an obesity rate of 31.3 percent. And like other southern states, it is very Republican-dominated. Republicans aren’t big on anti-poverty programs—which, in effect, are also anti-obesity programs given the relationship between poverty and obesity—and in Tennessee, the U.S. Census Bureau found a poverty rate of 17.3% for 2008-2012. Plus, Tennessee is a so-called “right to work” state, meaning it’s very weak on union protection. Tennessee Gov. Bill Haslam has rejected Obamacare’s Medicaid expansion in his state, where around one million residents lacked health insurance in 2013. To make matters worse for Tennessee residents who are obese, poor and uninsured, Tennessee Republicans have proposed legislation that would outlaw Obamacare exchanges throughout the state.

Ohio, which Gallup considers the eighth fattest state in the U.S. with an obesity rate of 30.9%, is very much a swing state in presidential elections. Obama carried Ohio (where Republican Gov. John Kasich is seeking reelection this year) in 2008 and 2012, but it took a lot of hard and aggressive campaigning. So why is there so much obesity in Ohio? A lot of it has to do with the fact that Ohio, like other parts of the Rust Belt, has been hit hard by the outsourcing of manufacturing jobs to developing countries. Outsourcing has created a lot of poverty in Ohio (which, according to the U.S. Census Bureau, has a poverty rate of 15.3%).

According to Mary Nally, executive director of Community Food Initiatives in Athens, Ohio, 20% of the people living in Athens County suffer from food insecurity—and Nally has said that “There’s a strong relationship between being food-insecure and being obese.” Nally has noted that in some rural parts of Athens County, the poor suffer from inadequate access to fresh fruits and vegetables and are more likely to eat an abundance of unhealthy processed food. Underscoring Ohio’s swing-state outlook is the fact that Kasich is among the few Republican governors who has agreed to a Medicaid expansion under Obamacare.

When health insurance companies send out literature encouraging Americans to get more exercise, eat healthfully and lose weight, they aren’t doing it out of the goodness of their hearts. They realize that if Obamacare is going to bring them a lot of new customers, it will cost them less if those customers are taking better care of themselves. But embracing a healthy lifestyle can be harder if one is poor, and Kentucky is a “red state” with a lot of poverty and a lot of obesity. According to Gallup, Kentucky is the U.S.’ ninth fattest state with an obesity rate of 30.6%—and according to the U.S. Census Bureau, Kentucky’s poverty rate increased to 19.4% in 2012. But Ron Crouch, director of research at the Kentucky Education and Workforce Development Cabinet, has predicted that Obamacare will create a lot of new healthcare jobs in Kentucky, possibly helping offset the loss of so many manufacturing jobs in that state, where Kentucky Gov. Steve Beshear, a Democrat, has been a strong Obamacare supporter.

The 10th most obese state in the U.S., according to Gallup, is Oklahoma, where there is an obesity rate of 30.5% and poverty reached a 10-year high in 2012. Oklahoma is also a hardcore red state where Republican Gov. Mary Fallin has refused Obamacare’s Medicaid expansion even though many people lack health insurance there. Oklahoma is a textbook example of why healthcare reform is desperately needed in the U.S. According to a report by the Kaiser Family Foundation, about 144,000 poor, uninsured Oklahoma residents would be eligible for Medicaid assistance under Obamacare, but thanks to Fallin and other Oklahoma Republicans, they are being left out in the cold.