Cliven Bundy steals from America: The scary return to a West where guns -- not law -- rule

Fox News has a dangerous new hero. He's harming public lands and taxpayers, and proving the need for grazing reform 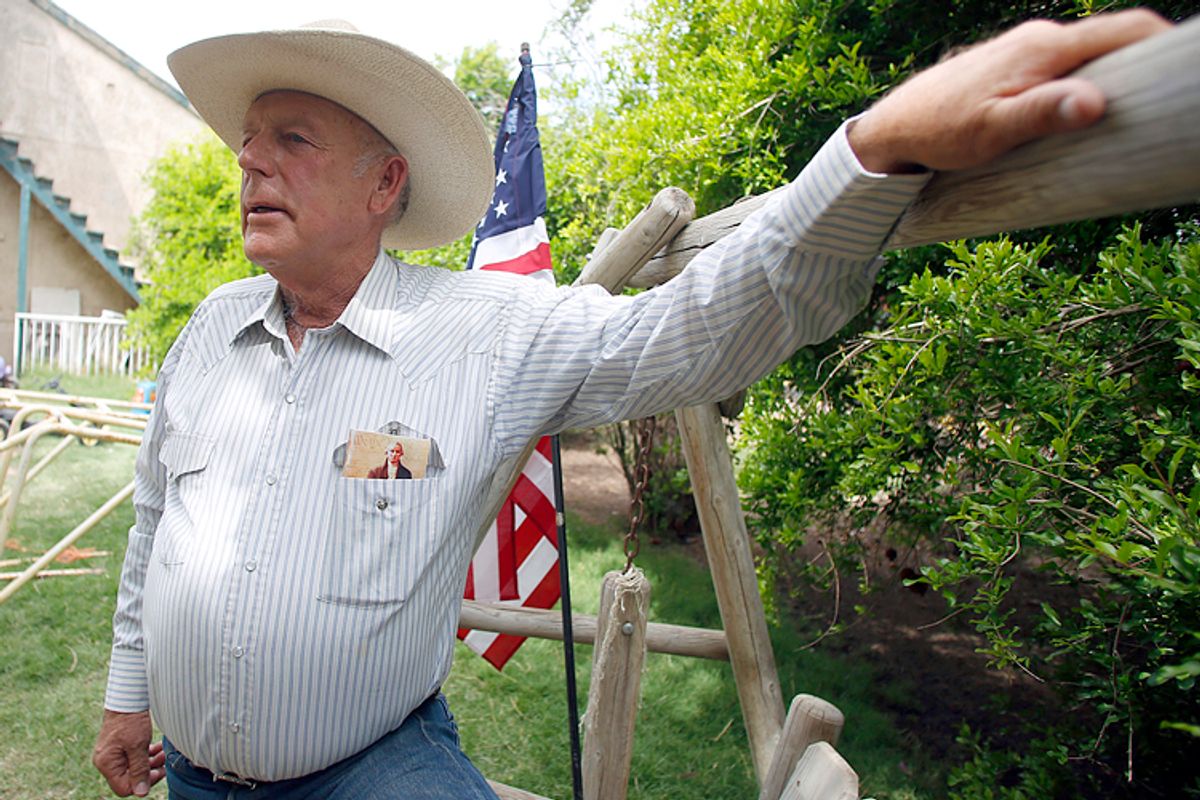 The showdown in Bunkerville last week was sensational – a rancher, his cows, and an armed militia resisting the federal government’s roundup of trespassing livestock. With banners pronouncing “Liberty” and “We the People,” these protesters mistook the issue of long overdue grazing fees for an issue of states’ rights and federal overreach. In the end, Cliven Bundy’s 400 cows were herded back onto the Mojave Desert to trample desert tortoise habitat, degrade water quality, crush cultural sites, consume native vegetation and defecate in springs and the Virgin River. The cheering crowds proclaimed, “Freedom!” and “Victory!”

The public lands livestock grazing program uses approximately 250 million acres of the arid west, with permitted users paying a pittance to the Bureau of Land Management (BLM) or the Forest Service for the privilege to do so. And it is truly a pittance. When Bundy stopped paying BLM in 1993, he owed just $1.86 per animal unit month for his mama cows, or $3,348 to use the land year-round. But Bundy refused to pay the fees because he didn’t want to reduce his herd to just 150 animals in order to help save the Mojave desert tortoise, a species given an emergency Endangered Species Act listing, and whose existence is specifically threatened by livestock competition for scarce desert vegetation and direct crushing and trampling of tortoise burrows. Bundy’s non-payment of fees was coupled with non-cooperation about getting his cows off the range. Since 1993, Bundy’s herd has ranged from 550 to more than 900 animals, far more than he was ever legally permitted. His cows have roamed over a much broader area than he was ever legally allowed to use. Without accounting for the legal expenses incurred by BLM and the costs of last week’s failed roundup, Bundy has since racked up a million dollar bill for overdue fees, trespass fees, and fines.

As Bundy musters up an army of supporters for this theft from the American public and the harm to the public lands, taxpayers lose at least $123 million each year that the federal grazing program continues. According to the Government Accountability Office, in 2005, the grazing fee wasn’t nearly sufficient to cover the costs of managing public lands grazing, and we – you and me, but apparently not Mr. Bundy – subsidize the program with $1.2 billion every decade, not counting the additional costs of species recovery, range infrastructure, soil loss, weed infestations, increasing wildfires, and bacterial contamination of water supplies. Despite the efforts of Western Watersheds Project and others, the fee formula has never been revised.

What a disaster, indeed.

The public lands livestock grazing program continues for many of the same reasons that Bundy “won” his range war this week. Federal land managers are afraid to stand up to the undue influence of Bundy and the mythical American cowboy he represents. There are only about 22,000 public lands livestock operators. The BLM and Forest Service place grossly disproportionate value on grazing, and fail to address the varied and severe negative impacts of public lands livestock grazing on the environment and on the federal deficit. Managers who try to rein in rogue permittees are quickly transferred out of their positions, and members of Congress who propose reforming the fee formula or allowing for voluntary permanent retirement are accused of trying to ruin a way of life.

Furthermore, the American public is woefully misinformed about the entrenchment, expense, and ecological harm of this land use. Make no mistake, Bundy isn’t the only rancher ripping off the American public. Every public lands livestock permittee is banking on federally-funded range infrastructure like solar wells and fences and benefitting from federally-funded wildlife killing that targets native predators like wolves and coyotes for the sake of livestock safety. Many permittees benefit from drought payments and disaster payments, seek handouts for “restoration projects” that are really just reseeding the forage species their cows stripped in the first place. And most livestock operations occur at the peril of endangered species, whether it’s the Mojave desert tortoise being nutritionally starved or Greater sage-grouse nests being trampled and their eggs destroyed. How do you calculate the cost of extinction?

Turning Bundy’s cattle back out onto Gold Butte does more than continue his illegal actions; it turns back the clock to a time when the West was controlled by whoever had the most guns, federal laws notwithstanding.

Public lands are valuable lands. The time to reform the public lands grazing program is now.

Travis Bruner works for Western Watersheds Project, a national conservation group with a mission to restore western watersheds and public lands for wildlife

Greta Anderson works for Western Watersheds Project, a national conservation group with a mission to restore western watersheds and public lands for wildlife