She's stepping into a new role, but she doesn't need a baby to "soften" her image 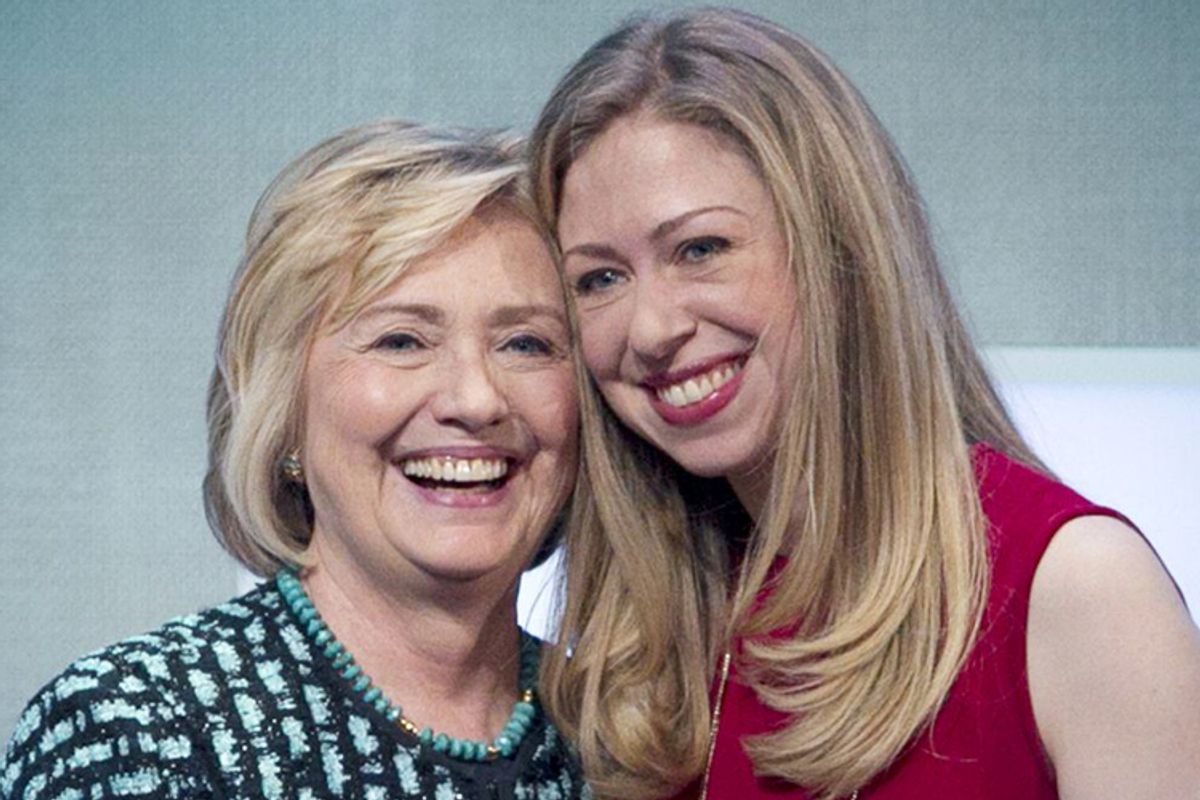 There's an axiom that the comments on any article on feminism justify feminism. This is known as Lewis's Law. In the wake of the recent announcement that Chelsea Clinton is expecting her first child, I would like to amend it to note that the commentary around any conversation about Hillary Clinton justifies why we need Hillary Clinton.

Chelsea revealed her pregnancy in New York Thursday at a Clinton Foundation event with her mother, a "Girls: A No Ceilings Conversation" to "advance progress for women and girls around the world." As Chelsea told the audience, "I just hope that I will be as good a mom to my child and hopefully children as my mom was to me. Marc and I are very excited that we have our first child arriving later this year and I certainly feel all the better, whether it’s a girl or a boy, that she or he will grow up in a world full of so many strong female leaders." And after the younger Clinton acknowledged her mother as both a good parent and a strong female leader at an event about empowering women in the workforce, what happened next? Plenty of ridiculous, retro speculation about how her 34-year-old daughter's impending motherhood will affect Hillary Clinton's career prospects. To quote Archer, "This is like O. Henry and Alanis Morissette had a baby and named it this exact situation."

In the Christian Science Monitor, writer Linda Feldmann quickly went all out,  musing, "How, if at all, might the news affect whether Hillary Clinton runs for president in 2016? … Perhaps it’s sexist even to ask the question – how will a grandchild affect her decision – but until she announces either way, it will be out there ... As anyone who’s had children knows, there’s often nothing like the bond between mother and daughter when the first grandbaby is on the way. If we had to guess, we'd say that Hillary Clinton will be a tad less interested in running for president now that she's about to be a grandmother." But the Wall Street Journal helpfully surmised that "Mrs. Clinton's status as a new grandmother could prove helpful, softening the image of a veteran politician who is often seen through a partisan lens." Politico mused, "The armchair thinking goes, having a grandchild may make the Iowa State Fair a less appealing place to spend the summer of 2015. Why beg donors for money at dozens of events a month when there’s a happy baby to spend time with in New York?" but speculated, "In the vernacular of cable television, becoming a grandmother can only 'humanize' Clinton, who has long been critiqued for her aloof demeanor and rigid personal discipline." Washington Monthly, meanwhile, declared "Nana for President," and observed, "Becoming a grandmother offers another particular advantage: it will give her the space to create a new public image. One that is softer. Cuddlier. More relatable. More real. And that’s exactly what Hillary needs." Thanks, all. You do know she's been the first lady, New York's first female senator and the U.S. secretary of state, right?

And on television, the talking heads were gobbling up the story like it was the "Up" pastry plate. On MSNBC’s "Morning Joe," Andrew Ross Sorkin was all over "the human drama that is Grandma Clinton," saying, "It's going to change the way people look at Hillary Clinton. There's a softening, there's a compassion thing. You don't think over the next two years, on the campaign trail, this is going to be part of the narrative?" Over on "CBS This Morning" Friday, Charlie Rose asked former President Bill Clinton, "President or a grandmother?" as if the two were mutually exclusive. The former president diplomatically answered, "If you ask her, I think she'd say grandmother, but I have found it best not to discuss that issue." But why is this even being asked?

Mrs. Clinton's eagerness to become a grandmother has been a running joke since her daughter wed almost four years ago. In a Glamour interview earlier this year, Chelsea admitted, "She asks us about it every single day." And after Thursday's announcement, Mrs. Clinton enthusiastically took to Twitter to declare, "My most exciting title yet: Grandmother-To-Be!" She has every right to be completely stoked about her expanding family. I'd just like to point out that Mitt Romney has so many grandchildren he has literally lost count, and in 2012, you didn't see a whole lot of conversation about how his role as Grampy would affect his run at the White House. John McCain ran for president as a grandfather. Hell, Sarah Palin ran for his vice president while her daughter was an unmarried pregnant teenager – and she had a young baby of her own -- and there wasn't this much speculation about what motherhood and grandmotherhood would do to "soften" her image. But Hillary? An educated, powerful political figure with decades of experience and achievement behind her? She's still living out just the latest incarnation of the perpetual questioning over whether she's soft and human and pleasant enough, when being soft and pleasant are not in fact job qualifications. Well, here's the answer. If you didn't respect her for her own merits and accomplishments before, a grandbaby won't make much difference. But if you wonder if that longed-for and no doubt already much-loved grandchild will affect her ambitions, consider that this is the woman who said 22 years ago, "I could have stayed home and baked cookies and had teas, but what I decided to do was fulfill my profession." A woman who just one day ago was celebrating her daughter's pregnancy at an event championing girls and women. What makes you think anything's going to stop her now?