A new book details how Obama's evolution on marriage equality was orchestrated. It's sickening -- but encouraging 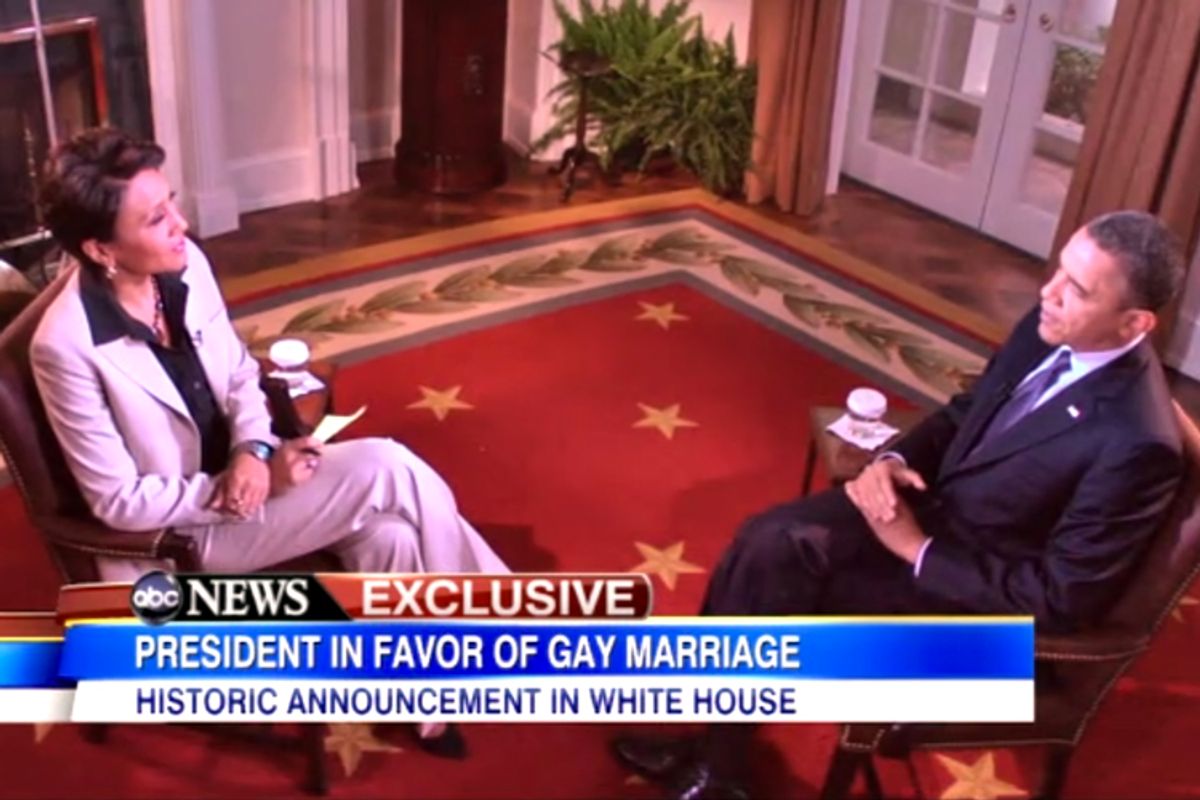 Usually when an in-depth, book-length account of a recent political episode is released, you expect such a second draft to add some nuance to the conventional narrative of the time.

Take Elizabeth Warren's new memoir. During the creation of the Consumer Financial Protection Bureau, the standard assumption had been that she and Timothy Geithner were sworn enemies and he was doing everything he could to stop her from advancing. According to early readers of the book, though, the real situation was a bit cloudier. While Warren writes that "he and I just didn’t see banking the same way" -- duh -- the book also explains, in Politico's words, that Geithner "not only publicly backed her against attacks, he also defended her in private." Things are complicated and time gives us an opportunity to sort out the complications.

But then there's the other "hot new book" among political types: New York Times reporter Jo Becker's look "inside the fight for marriage equality." While "Forcing the Spring" appears to suffer from some substantial narrative problems regarding when and where and among whom the marriage equality movement began, there's little reason to doubt the thoroughness of her tick-tock explanation of how President Obama came to announce his support for marriage equality. And instead of adding complexity to the conventional wisdom of the moment -- that Obama's previous opposition to same-sex marriage had been entirely phony and politically motivated -- Becker's examination, released as an excerpt in this week's New York Times Magazine, shows that Obama's opposition was just as entirely cynical, if not more so, as everyone assumed.

Obama's "evolution" on marriage equality is a story with a happy ending. Just about everything leading up to that happy ending, however, is nauseating. No one believed him all those years when he said that his Christian principles informed his view that marriage should strictly be between a man and a woman, and they shouldn't have. He never "evolved." He clearly hasn't had a problem with the prospect of same-sex marriage for one day in his life. His opposition and eventual support were the direct products of mathematics:

The assumption going into the 2012 campaign was that there was little to be gained politically from the president’s coming down firmly in favor of same-sex marriage. In particular, his political advisers were worried that his endorsement could splinter the coalition needed to win a second term, depressing turnout among socially conservative African-Americans, Latinos and white working-class Catholics in battleground states.

But by November 2011, it was becoming increasingly clear that continuing to sidestep the issue came with its own set of costs. The campaign’s internal polling revealed that the issue was a touchstone for likely Obama voters under 30. The campaign needed those voters to turn out in the record numbers they had four years earlier, and the biggest impediment was Obama’s refusal to say he favored allowing gay couples to wed.

There was a lot of polling, all right, right up to and through the very words Obama used when he announced that he "personally" had no problem with same-sex couples getting married. Obama's political team enlisted the help of former Republican National Committee chair Ken Mehlman -- a similarly, mind-bogglingly cynical figure in the story of gay rights politics -- to do some polling to help craft the president's announcement.

On Nov. 10, 2011, Mehlman sent Plouffe an email suggesting that the president announce his support for same-sex marriage in a TV interview with a female host. He also laid out specific language for Obama to use. Explain that this was a family decision and not a political one, he advised: “Michelle and I have been having a similar conversation in our family that lots of American families have been having on marriage equality. I fully understand that some will agree, while others will disagree, with where our family has come down on this.” Mehlman advised Obama to talk about his daughters — “as Michelle and I have been thinking through what we teach Sasha and Malia about America’s greatness” — and about religious liberty and fairness to all. “When you’re president, you’re president of all Americans. And all includes gays and lesbians — men and women who are serving across this country — firefighters, doctors, teachers, courageous soldiers who serve and protect the rest of us.”

And sure enough, that's more or less the exact language Obama used in his TV interview with a female host. It never made sense to us why so many politicians cite their children's views as the basis for their decision to support same-sex marriage, but apparently it's because this sort of consultation with children polls well, and so they pretend that that's the big reason? So odd, all of this.

If Obama wants his legacy to be that of a politician of authenticity, or of conviction, his narrowly mathematical, focus-grouped journey on marriage equality won't help. It shows his strong, probably overriding, instinct for caution, at times reaching "Veep"-like levels of parody.

On the other hand, maybe conviction is overrated? Because once Jo Becker's book is out of the news, history will go back to remembering Obama's role in marriage equality, and gay rights in general, by one all-important bullet point: He was the first president to openly support same-sex marriage.

The good thing about overly cautious, number-watching politicians is that at least you know what you have to do to win their support. The road is difficult, but clear and linear: If outside agents can manage to make it so that opposing a policy hurts the cautious politician more than supporting it does, then the politician will turn and support the policy.

This is sort of Politics 101. I know. But so much of our discourse involves these romantic, sentimental notions about the need for politicians of conviction, who will stand up for the right policies even when they're not popular! Which isn't even true: Each individual wants politicians to do everything that's popular to that individual. At least with a cautious politician, you know that if you can go about the hard business of organizing a vocal majority, you'll get your wish.