We are not #BostonStrong: Stop turning tragedies into slogans!

While intended as shows of solidarity, the actual effect of such catchphrases could be much more problematic 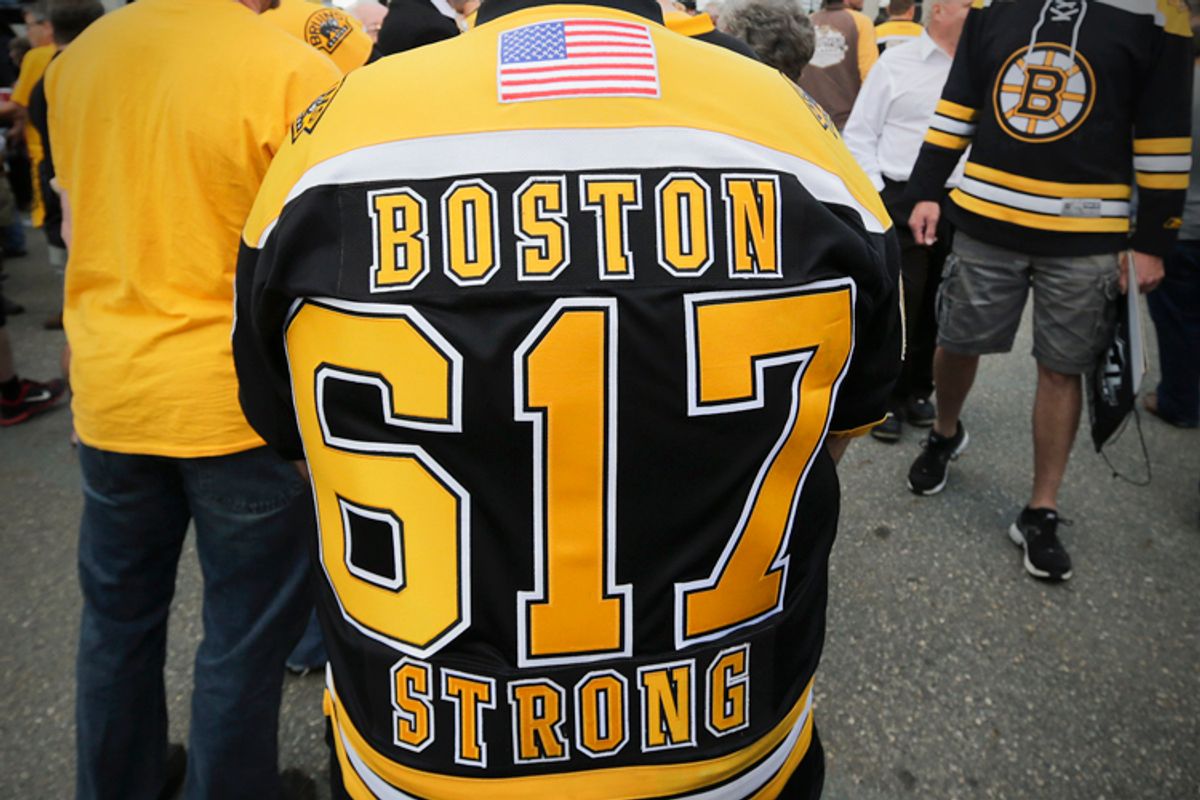 This article was originally published at The View From Boston.

Two bombs exploded in Boston a year ago Tuesday. Four ended up dead when all was said and done, with many dozens injured, and that day has become a subject of much conversation as this year’s marathon is upon us. Sports Illustrated came to take a photograph of Bostonians in remembrance of the day when exploding pressure cookers detached limbs and transformed the marathon to panic. The photograph will be on the magazine’s cover.

At a ceremony to honor the victims of that tragedy, Vice President Biden said that we Bostonians are “living proof that America can never be defeated. So much has been taken from you, but you have never given up.”

America’s eternal invincibility aside, it’s undeniable that the victims of last year’s bombings show impressive resilience and strength in coping with such a disgusting day.

But what’s so strong about the rest of us?

For the most part, life went on after the smoke cleared. Conversation at the time centered on who had been responsible. A section of Boylston Street was cordoned off while investigators worked within big white tents. People left flowers against barriers.

The next day, novelist Dennis Lehane wrote in the New York Times that the bombers had “messed with the wrong city,” not in the sense that vengeance was imminent, but in the sense that Bostonians would press on, stubborn, content with our routines and passions. In other words, violence would not accomplish anything:

“Trust me, we won’t be giving up any civil liberties to keep ourselves safe because of this. We won’t cancel next year’s marathon. We won’t drive to New Hampshire and stockpile weapons. When the authorities find the weak and terminally maladjusted culprit or culprits, we’ll roll our eyes at whatever backward ideology they embrace and move on with our lives.”

Indeed, people rode the subways, went to work, met friends at bars, and didn’t shy away from going to the large gatherings of defenseless people that are sporting events, all while the authorities did their best to track down suspects who were still at large. We mostly moved on with our lives.

But then, once the elder Tsarnaev and officer Sean Collier were killed in a shootout that Thursday night, the strong and stubborn business of going on with our lives came under arrest.

It was as if we were strong only while we were faced with no real choice other than to press on. But once the enormous police presence rolled in and presented us with the new choice of cowering in our homes, we obliged. Of course, we told ourselves that this was helpful to police somehow, that the remaining Tsarnaev would be out on the street and easily found once the rest of Boston was hidden away inside.

That approach proved frustrating, and it wasn’t until Bostonians returned to their lives that one family noticed someone had taken up an unnatural residence in their boat. The search was over.

Yet the fear and weakness lingered even when the fugitive was surrounded in three dimensions. A helicopter circled as authorities sent in a robot to check on the retreated man. It was in this state of affairs that authorities were exposed to perhaps the most peril they would encounter throughout the ordeal. A jumpy officer fired and others followed suit, shooting chaotically, exposing comrades to dangerous crossfire.

I felt the uncertainty myself. I remember my ambivalence as editors gave me an hour to scratch out an account of the day. I can still detect in that piece the unease I was feeling.

And somewhere in this fluctuation between fear and strength and back again, we spawned a slogan for ourselves: Boston Strong. We codified our defiance into symbolic strength–an oxymoron. It became a hashtag, a T-shirt, a trinket for tourists, and a totem that sprang up in place of the stubbornness Lehane predicted. If you were a proper Bostonian, it seemed, you had to be Boston Strong.

I’ve heard it said that this is a sort of coping mechanism. Symbols are powerful things, after all, and if we pour our emotional frustrations into something that feels knowable, even if our own creation, we can begin to make sense of our feelings. We can heal.

But I simply haven’t met any of these healing people. Instead, I come across #BostonStrong used in only the most flippant ways. One Boston Globe columnist suggested that if the Bruins won the first game of a playoff series it would be “the ultimate Boston Strong moment.” The frivolous use of the term even prompted the Globe’s Joanna Weiss to ask, “Can a lobster roll be Boston Strong?”

Boston Strong is now a team name. It reminds me of President Bush’s refrain that you’re either with us or against us.

When Tsarnaev was apprehended, David Ortiz told Red Sox fans, “This is our fucking city.” The applause thundered.

We use this language because we imagine the Tsarnaevs as outsiders. Perhaps this is why Mr. Biden broadened Boston’s tragedy into a concoction about America’s invincibility. They, we hallucinate, messed with our city, and we stand willing to repel the invaders of our urban tranquility. Put on a jersey and join the cause.

But the Tsarnaevs weren’t invaders. Dzhokhar went to school a block from where I went to school. Tamerlan boxed in Cambridge and won the New England Golden Gloves heavyweight title twice. And although it may well be that their motives were ideological, senseless violence, no matter its motive, is a constant challenge in Boston. (In January, Marty Walsh’s first month as mayor, nine people were murdered in the city.)

The #BostonStrong meme betrays our insecurities. If we were strong, we would not need to remind ourselves.

Perhaps it helps us neglect the stark reality that our little corner of civilization is always vulnerable, that we are always exposed, defenseless, and that our lives and our limbs are so fragile. But it isn’t the outside world we are vulnerable to. The 3,000 Bostonians who showed up to be featured on the cover of Sports Illustrated are unlikely to face violence from outsiders. Instead, they are far more likely to face violence from one another.

We are all prone to weakness and the cruelty that can follow.

And if we are to possess the sort of strength, true strength, that cannot evaporate and does not need remembering because it cannot be forgotten, then perhaps we should mind the bonds we make with one another and insist that we are only as safe as the weakest, most desperate, most alienated, most misguided among us.

There are many ways to improve a community, of course, and I have no interest in picking one approach over another. I simply find #BostonStrong to be a vile replacement. It is a self-assurance and a contentedness with waiting in our homes while we imagine the nuisance of violence can pass over.

When this year’s marathon gets underway, amid heightened security, I doubt we’ll be rolling our eyes about last year, as Lehane hoped. We will instead make the finish line into a shrine and a hashtag into a prayer.

We ought to show our strength to each other, if strength is to be of any use, by including one another not in a moniker but in life. That is, we have to do something more than tweet to have a strong community. Strength is not a T-shirt any more than love is a bumper sticker. Let’s make progress with real strength and real love and not their symbolic impostors. “We can believe,” said Mayor Walsh earlier today, “as Martin, Krystle, Lingzi and Sean did. We can believe that anything is possible. And then we work our hearts out to prove it. This is Boston after all.”

Despite all the rhetoric, I don’t see this proof. Is our community more just, more inclusive, more uplifting, safer, happier? Even cleaner? Hashtags and memes and tweets don’t make proofs. Let’s put a few more hours into our community than we did last year, especially with those we wouldn’t normally encounter. Then we’ll be a little stronger.

R. Brock Olson is a writer living in Boston. You can find him on Twitter at @rbrockolson.