Johnny Depp makes a mean and stupid God in yet another baffling and stupid techno-thriller. What's going on? 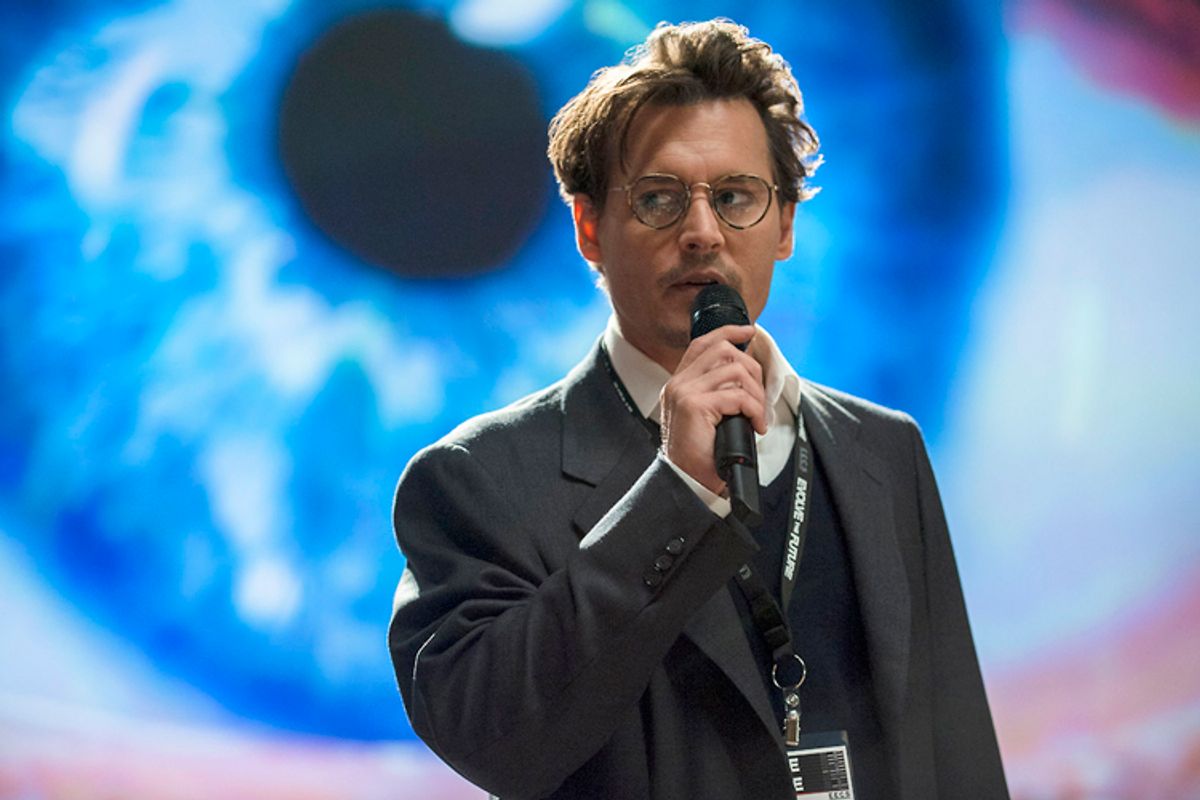 In Spike Jonze’s “Her,” Scarlett Johansson plays an operating system who becomes a human being’s lover and then transcends him, moving into some numinous and ethereal computing cloud like the distant deity of liberal Protestant theology. Software engineers and artificial-intelligence theorists groused about Jonze’s portrayal of the social and technological future, which was perhaps more fanciful than rigorous. But compared to Oscar-winning cinematographer Wally Pfister’s directing debut “Transcendence,” in which Johnny Depp plays a left-utopian scientist who gets uploaded into a supercomputer, “Her” is a work of brilliant futurist prophecy larded with gems of philosophical complexity. “Transcendence” should really be called “Him,” with a capital H: Born again in digital space and connected to the Internet, Depp’s character becomes an avaricious, power-hungry and petulant God, the unbearable, finger-in-every-pie overlord of the Old Testament.

There’s an Occam’s Razor approach to the question of why “Transcendence” is such a terrible movie, one that doesn’t even require engaging the larger question of why Hollywood movies never seem to get technology right, let alone capture its moral or philosophical consequences. (My wife has refused to watch Sandra Bullock in anything ever since the risible 1995 thriller “The Net,” conspicuously made by people who were not quite sure what that term indicated.) I can save you the trouble of writing in if you were going to say that it’s “just a movie,” and that perhaps I need to chillax and unbundle my knickers, etc. That’s not actually an answer to either question; indeed, one might say that the ritual invocation of “entertainment” as an antiseptic force of pleasure-seeking scrubbing bubbles that neuter all thought and meaning raises rather more questions than it answers. (Pfister: “First and foremost, I want to entertain the viewer.”)

Anyway, this picture has some specific characteristics, although they’re elusive and not plentiful amid the general atmosphere of third-rate apocalyptic rehash. “Transcendence” is a moronic stew of competing impulses -- bad science meets bad sociology meets bad theology -- in which it’s hard to say who looks worse: The naïve techno-boosters like Depp’s Dr. Will Caster (an Ayn Rand character name if ever there was one), wearing round spectacles and spouting clichés about the coming man-machine “singularity” apparently mined from Wired magazine in 1999, or the small-minded Luddite reactionaries of the so-called underground resistance, conducting KGB-style assassination campaigns against their enemies. In his recent interview with the Wrap (also quoted above), Pfister said that he wanted audiences to “connect with both sides of the debate” but made his own position clear, if you even want to call it a position: “If the characters can use technology for the betterment of society, why not wipe out pollution? Why not heal people with diseases?”

I’m sorry, but “Let’s use machines to cure cancer, as long as there’s no downside” is barely even a thought or a wish, and it’s certainly not a philosophy. Do Pfister and screenwriter Jack Paglen actually believe that there’s some constituency of DIY cord-cutter radical-skeptic types with funny hair who are dead set against medical technology? I’m pretty sure the answer is no, which brings us back to the parsimonious explanation for “Transcendence”: Pfister, who has finally gotten a turn in the director’s chair after many years as Christopher Nolan’s cinematographer, is one of those movie-industry people who is really good at the technical side of the job but maybe not, you know, all that much of a candidate for the chair in Heidegger studies or whatever. Pfister’s former boss, on the other hand, is a dark genius when it comes to infusing his sensory-overload cinema with complicated subtext, with at least a somewhat convincing simulation of depth and ambiguity. (Nolan would never have touched this screenplay with a 50-foot robotic arm.)

Actually, no, wait. That sounds like I’m accusing Pfister of being a dumbass, which is totally not the point. You don’t have to be a book-learnin’ intellectual with an expensive education to be an important filmmaker, far from it. As Mark Harris’ terrific new book about Hollywood and World War II, “Five Came Back,” makes clear, Frank Capra was kind of an idiot with confused proto-Tea Party politics, and John Ford was a taciturn Irish-American drunk, a classic man’s-man who probably never once had a conversation about “ideas.” But Capra and Ford engaged with the ideas about democracy and manhood and America in their films with profound sincerity, in original and often intense fashion. Harris’ account further demonstrates that the perceived ideological content of Hollywood movies was a matter of intense interest to studio executives, who scrutinized screenplays and finished films closely for any hint of anti-Americanism, left-wing sympathy or other troublesome messaging.

Wally Pfister is smart enough to understand, perhaps not quite consciously, that times have changed and the ideological task is now different. (Spoiler alert, this paragraph!) “Transcendence” is constructed to signal an engagement with supposedly important issues, but under the surface it delivers a familiar narrative of gender norms – the abusive, controlling husband and the hysterical doormat wife – mixed with a message of militant conformism: If only those crazy radicals hadn’t shot Will Caster with a radioactive bullet, his magic sentient computer would have scrubbed all the bad chemicals from the air and water, cloned the passenger pigeon and restored sight to the blind. Since it’s evidently a very short step from turning off your smartphone to protesting against animal experimentation to psychotic acts of violence, you’re better off sticking with your defined role of spectatorship and consumption and paying no attention to the men behind the curtain.

So the question of how and why this particular movie delivers such a poorly informed and morally dishonest parable about technology inescapably evolves into the bigger one: Why does mainstream cinema seem so baffled and awkward when confronted with the Information Age? It’s been almost 20 years since “The Net” (directed by Hollywood lifer Irwin Winkler, then in his mid-60s), two decades in which the lives of ordinary people have become inextricably intertwined with social media and the Internet, and the depiction of those things on film still feels mystified. The recent James Bond film “Skyfall” was visually spectacular and dramatically effective (as that formula goes), but its depiction of the Internet was standard-issue paranoia, thematically indistinguishable from that found in the circa-2000 wave of silly hacker movies like “Swordfish,” “Antitrust” and “Enemy of the State”: It’s a magical device or plot shortcut, used by bad guys to penetrate the free world’s intelligence agencies and blow stuff up.

It may be worth noting that those dumb hacker flicks often got one aspect of techno-paranoia right, which a huge hit like “Skyfall” and a would-be hit like “Transcendence” conveniently ignore, or turn upside down: In the real world, we have more to fear from government spies and spooks than from whackadoodle supervillains on fortified islands or Ukrainians phishing for credit-card numbers. We don’t need to upload Johnny Depp onto the Internet to feel like someone is watching us, as it turns out. But it’s a whole lot less flattering to be watched by a faceless bureaucratic panopticon, an impersonal bot-God, than by a jealous husband who monitors our dreams, manipulates the stock market and reanimates the dead.

Benedict Cumberbatch, the most adored figure in pop culture, made a movie about hacker-counterculture hero Julian Assange, and absolutely nobody wanted to watch it (for good reason). David Fincher’s “The Social Network,” while it was an important American film, is barely about technology at all, and neither is Fincher’s “Girl With the Dragon Tattoo,” although it may offer the most nuanced and realistic portrayal of hacker culture in any recent Hollywood picture (which is not saying a lot). There’s a formal conflict at work here, in that the medium of cinema has difficulty addressing a technological revolution that threatens to devour, subsume and transcend it, or may already have done so.

Describing the recent invention of television in 1944, German refugee philosophers Max Horkheimer and Theodor Adorno noted that the film industry might abruptly find itself transformed from the vanguard of cultural production into a reactionary or conservative force. “If technology had its way,” they wrote, “the film would be delivered to people’s homes, as happens with the radio.” Warner Bros., they quipped, might become as old-fashioned as a symphony orchestra, while TV would become the derisive fulfillment of Richard Wagner’s dream of Gesamtkunstwerk, the fusion of all the arts in one form. I’m tempted to suggest that the Internet takes that a huge conceptual step further, by convincing us that our act of consumption is also simultaneously an act of creation. (I'm sorry and not sorry those guys did not live long enough to theorize the Internet; it’s safe to say they wouldn’t have been overly impressed with its supposed democracy.)

So movies about information technology often seem embarrassing because they cannot capture or convincingly fake the ever-changing “interactive” flow of the thing itself, the very spirit or Geist, as the Frankfurt boys would have said, that makes us feel like participants in the online universe rather than consumers. They remind us that we are sitting in front of a manufactured narrative that may have its own agenda, as the Internet appears not to do. The Hollywood film’s agenda of ideological reassurance and thought-free entertainment, its insistence on a mode of pleasure that “must not demand any effort and therefore moves rigorously in the worn grooves of association” (Horkheimer and Adorno again), then becomes thunderingly obvious, and we thrust it away. Are there exceptions? Yeah, sure, but not when you make terrible casting decisions: Nobody thinks Johnny Depp would make a good God.