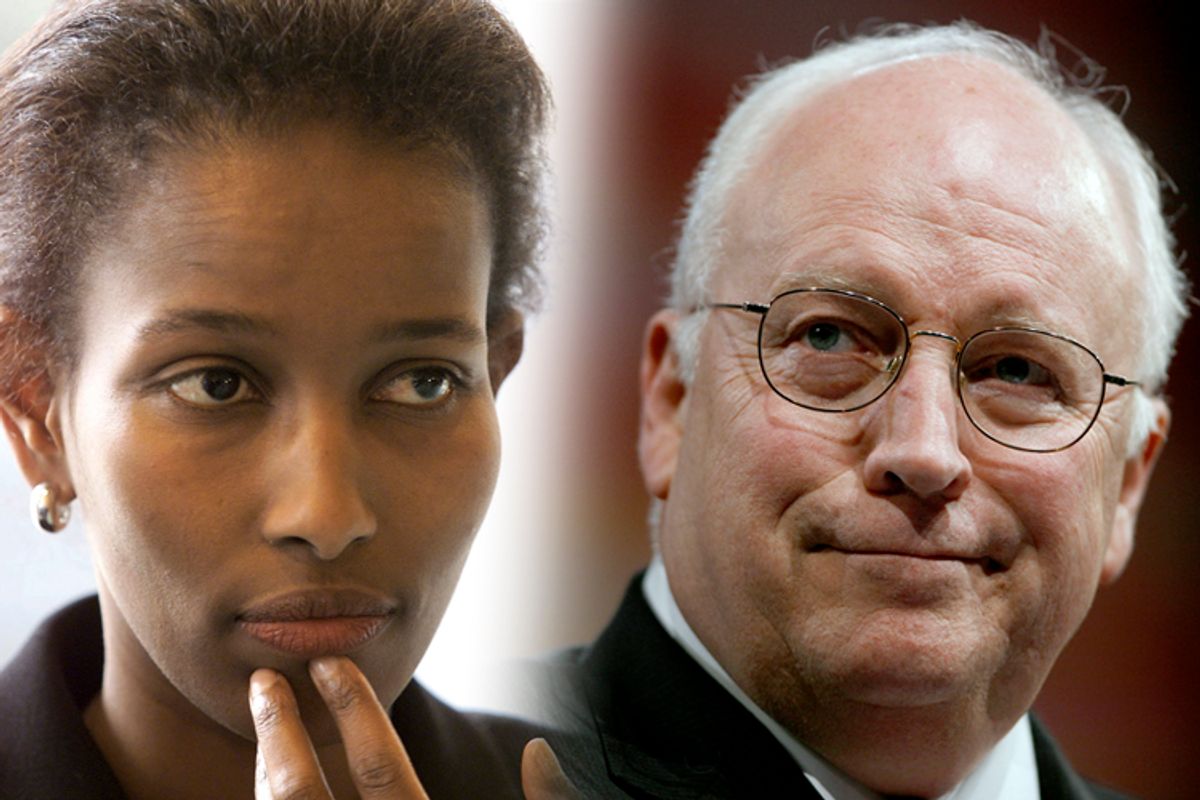 It’s been over a week since students at Brandeis compelled their university to refuse Ayaan Hirsi Ali an honorary degree, and the blogosphere is still roiling with grievance. Kirsten Powers laments Islam’s preferential treatment in USA Today. Mark Steyn notes the incident, as part of a eulogy to free speech in this weekend’s Spectator. Bill Kristol, John Podhoretz, Andrew Sullivan and Ross Douthat have all registered their disgust at this assault on a free and open discourse. Zev Chaffets at Fox News.com describes the incident as an "honor killing."

For those new to this story, let me first assure you that upon withdrawing his offer of an honorary degree, Brandeis president Frederick M. Lawrence did not attempt to stone Ali to death. Rather, he invited her to come speak on campus to engage the student body “in a dialogue about these important issues.”

I’d like to further that dialogue here by interrogating what’s really at issue in the Ali controversy, but first a quick review: Ayaan Hirsi Ali was born in Somalia -- where, at age 5, she suffered the torture of female genital mutilation at the hands of her own family. She sought asylum in the Netherlands from the Somali civil war, despite the fact that she’d been residing in Kenya at the time, a discrepancy that would later cost her a seat in the Dutch Parliament.

She wrote the screenplay to Theo van Gogh’s 2004 film "Submission," which juxtaposed passages from the Quran with images of an Islamic woman being abused. The film got van Gogh assassinated by a Muslim extremist, and sent Ali into hiding. She now runs a foundation with the unassailable goal of protecting women from "forms of oppression ... justified by religion or culture."

The Change.org petition that cost Ali her honorary degree acknowledges the legitimacy of her grievances with Islam, but condemns the “hate speech” through which she expresses them. The petition quotes her as saying:

Violence is inherent in Islam – it’s a destructive, nihilistic cult of death. It legitimates murder … the battle against terrorism will ultimately be lost unless we realize that it’s not just with extremist elements within Islam, but the ideology of Islam itself ...

Ali told Reason magazine in 2007, “There are Muslims who are passive, who don’t all follow the rules of Islam, but there’s really only one Islam, defined as submission to the will of God. There’s nothing moderate about it.”

Curiously, not one of the pieces protesting Brandeis’ decision actually quotes Ali’s past rhetoric. Instead, they refer obliquely to her “stinging attacks on non-Western religions,” “provocative ideas” or, most opaquely, her “life and thought.” The simplest explanation for this chronic omission is that to actually engage with Ali’s rhetoric would be to expose the absurdity of the Judeo-Christian persecution complex that informs so much of the genre.

One of the most popular lines of argument in the Ali apologias is that Brandeis is guilty of applying an outrageous double standard, one that allows for the hateful criticism of Judaism, but not a fair critique of Islam. Bill Kristol complains that while the university refuses to honor Ali, they saw fit to bestow a degree on playwright Tony Kushner in 2006, despite the fact that Kushner had “called the creation of Israel as a Jewish state ‘a mistake’ and attacked Israel for ethnic cleansing.”

Andrew Sullivan echoes this complaint, writing in the Dish:

The irony of this argument is that by equating Kushner’s anti-Zionism with Ali’s condemnation of Islam as a “nihilistic death cult,” Kristol and Sullivan exemplify a double standard exactly opposite to the one they allege.

Whatever one’s opinion on the necessity of a Jewish state, it is a fact that a portion of the Jewish community has been opposed to state Zionism for centuries. Whatever one’s feelings on Israel, it is a fact -- confirmed even in the work of Zionist historians like Benny Morris -- that hundreds of thousands of Palestinians were forced from their homes by Israeli soldiers in 1948. Thus Kushner’s statements align him with a minority position in the Jewish community, and assert a historical fact. Ali’s statements assert that no form of Islam deserves our tolerance, because inherent to the religion is a violent fascism that must be defeated. Kushner asks Jews to question the violence required to establish and maintain a majority Jewish state, in a region densely populated by Palestinians. Ali asks the U.S. government to declare war on the Muslim faith. Her "provocative" ideas aren't less legitimate because they come from the right. They're less legitimate because they assert that every "true" follower of Islam subscribes to an ideology of terror.

As Isaac Chotiner of the New Republic has pointed out, one need only imagine an alternate universe, in which Ali grew up a Palestinian victim of Israeli violence, then publicly decried Judaism as a nihilistic death cult, to understand that Ali’s defenders aren’t arguing for fairness, or open discourse. This is not a content-neutral debate about free speech. No one believes that a university’s coercive power in giving or withholding honorary degrees is a threat to the First Amendment.

What’s at stake in the Ali controversy is whether we should grant legitimacy to critiques of Islam that would be labeled hate speech if applied to the other Western religions. The only rationale for doing this would be if her statements, for all their off-putting ferocity, articulated an inconvenient truth. This is the argument her defenders imply, but are evidently too intimated by “liberal fascists” to forthrightly make.

The backlash the students of Brandeis have incurred for asserting that Islamaphobia is in fact bigotry, reflects precisely what makes Ali’s rhetoric so dangerous. Far from being a fringe position in our discourse, the idea that Islam is a uniquely malevolent ideology is the necessary fiction behind the war on terror.

To be clear: Fundamentalist religion is a scourge. And without question, fundamentalist Islam enjoys more political salience in many countries across the Middle East, than fundamentalist Christianity does in American politics (though the influence of the latter is considerable). What is fictitious in Ali’s rhetoric, and in the logic of our public policy, is the notion that Islam is uniquely susceptible to violent interpretation, and therefore all Muslims are inherently suspect.

If you believe Islam is forever and always more hostile to secular democracy than any other faith, look to the Bosnian war. There an insurgent Christian sect battled a Muslim-led government that favored pluralism. A 1995 CIA report estimated that 90 percent of the war’s atrocities were committed by Serbian Christians, their attempts at ethnic cleansing blessed not by imams, but by priests.

Chris Hedges, who covered the Bosnian war on the ground for the New York Times, wrote in his 2009 book "I Don’t Believe in Atheists":

The danger is not Islam or Christianity or any other religion. It is the human heart—the capacity we all have for evil. All human institutions with a lust for power give their utopian visions divine sanction.

The idea of Islam’s inherent toxicity was used to sanctify the war on terror from its very beginning. To frame the conflict as the kind of struggle between good and evil that appeals to all audiences, we could not allow the possibility that Islamic extremists are formed in part by external factors such as poverty, the tyranny of secular autocrats, or least of all Western intervention. We needed to explain the hijackers with the idea of an innately violent Islam, for the same reason we need a “culture of poverty” to explain our urban poor: If the enemy is an abstraction, we are absolved of responsibility. So the hijackers didn’t hate that we starved Iraqi children with our sanctions, they hated our freedom. So extremists weren’t empowered because we systematically crushed nationalist movements, leaving them the best-organized opposition to puppet governments, they were empowered because the arc of Islam bends toward terrorism. Similarly, we must question the existence of moderate Muslims, because the tools of the military and the security state are ill-equipped to accommodate such nuance.

That Ali’s defenders are afraid to explicitly endorse her rhetoric reflects the impotent victory of American liberalism, which has forced bigotry to retreat into subtext, where it still informs policy. To see what I mean, look no further than the recently disbanded  “Demographics” unit of the NYPD. Launched with the help of the CIA, the unit lingered around New York City’s mosques and halal stands for the past decade, making the Muslim population of the city feel like criminals, while generating exactly zero terrorism leads.

Hedges’ book warns that in positing religion as the one true source of human atrocity, new atheists like Sam Harris “externalize evil.” And once evil is no longer understood as a tendency inside all of us, which must be stifled through scrupulous self-reflection, it becomes a quality peculiar to them, whom we must destroy by any means. This externalization of evil is what allowed Harris to defend torture as a tool for the protection of human rights, and Hitchens to defend the illegal invasion of Iraq as a way of protecting a liberal world order. It’s what allows Ali to argue for the elimination of the world’s most popular faith, in the name of women’s rights and secular tolerance.

Ali argues that because some of the Quran’s rhetoric legitimates violence, everything associated with the book is poisoned. It seems only fair then, that the students of Brandeis applied the same logic to Ali herself. Because when neoconservatives and Iraq War cheerleaders rise to defend her, they aren’t defending freedom of expression, or the prerogative to call a violent ideology what it is. They are defending the sanctity of their own jihad.